Zen and the Art of Water Watching 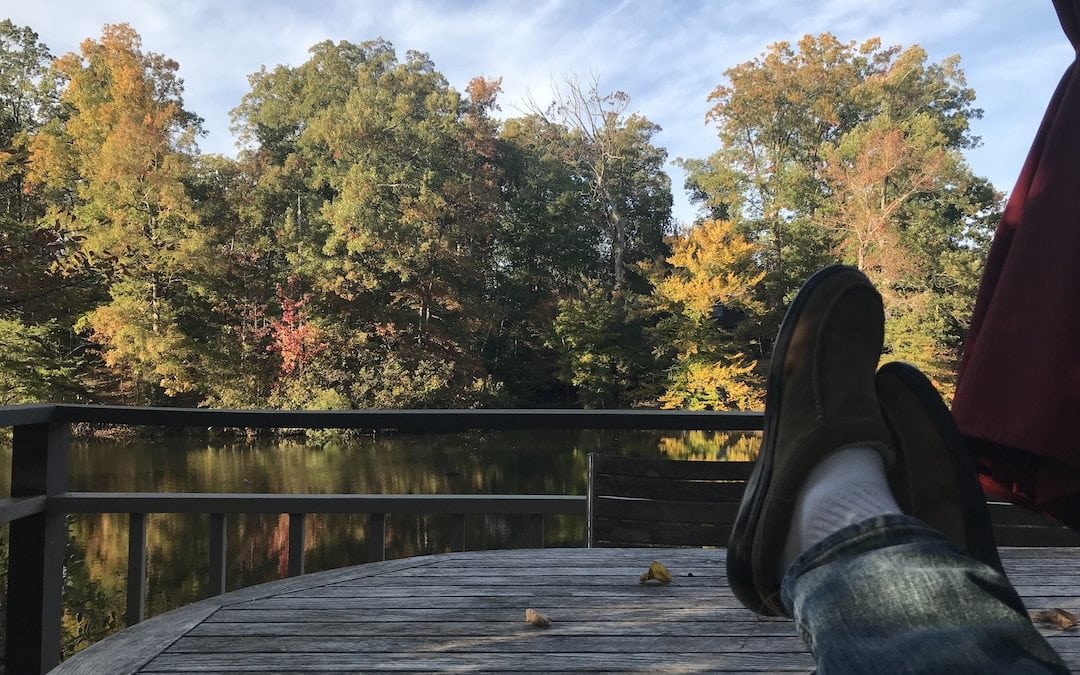 Kay-Kay and I are spending much of February in the Outer Banks of North Carolina. Water watching on the beach. In February. Crazy, yes? Two reasons: 1) we actually love the seacoast in winter, and 2) we closed on a house here two weeks ago. Bought while we were in California. And with the exception of a couple of FaceTime tours, sight unseen. Crazy, definitely?

So we’re doing a Large Amount of Stuff getting her ready for rental season. (Here’s a snippet. I just threw out a Sony sound system with not one but two cassette tape slots!) All this will, we are hopeful, allow us to pay for said beach house. So since I was out most of the day buying a six-pack of new flat screens, here’s an apropos post from 2018 on the zen qualities of water. New post from the winter beach next week!

Full confession. Kay-Kay and I live in a lovely house on a lake that’s kinda-sorta part of the James River. (It’s a long hydrological story, one of which I am incapable of rendering amusing in any way.) And by “on a lake,” I mean “almost in a lake.” It makes for prime water watching. 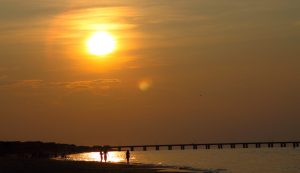 Although the Chesapeake Bay Preservation Act prohibits any permanent structures within 100 feet of the shoreline of any waters draining into the Bay—including the aforementioned James River—our house was built exactly one year before the ChesBay Act went into effect. Thus, we are “grandfathered in,” two words that strike joy in the hearts of all waterfront property owners in these parts. 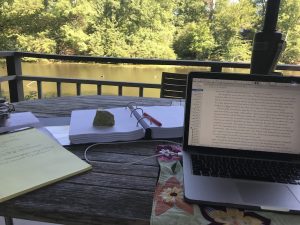 In fair weather, which (minus random climate change) usually occurs during eight or nine months of the year in Tidewater Virginia, I move my writing office whenever possible outside to a teakwood table right at the water’s edge. It has a big red umbrella very attractive to hummingbirds. With waterfowl in the lake, a bird feeder and a hummingbird feeder behind me, and woods full of furry mammals either side, I’m Henry David Friggin’ Thoreau. I like to think my writing is all the better for it, although perhaps not quite as good as Thoreau’s. But I also don’t live in a shack. So there’s that.

I do a lot of rewriting and revising out there by the water. It’s kind of a Happy Place for me, because water watching is just so Zen.

There’s something about water watching, isn’t there? I’ve wondered off and on for years why water has such a sublime effect on me, just like with most people.

Perhaps it’s because your Average Human Bean (heh, heh—autocorrect) is composed of about 60% water. It’s the single most important thing there is for humans. OK, other than air. And maybe chocolate. But you get the idea. 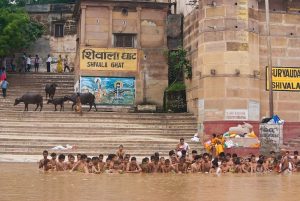 Every single religion in the world attributes some potent powers or symbolism to water. There are too many references in the Bible to even count, starting with Noah and the Great Flood in Genesis. And of course baptism is all about water. The Koran teaches that Allah created every living thing from water. No Buddhist or Taoist meditation garden would be complete without some serious water features. Hinduism is so connected to water that followers regularly jump into Very Polluted Rivers like the Ganges to get closer to the Divine—as well as dysentery and possibly several forms of cancer.

Water and the Landlocked 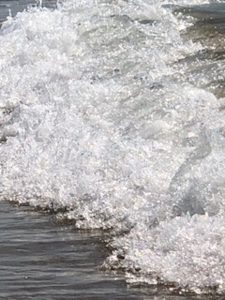 For those of us who came up in places many miles from the nearest ocean—like 900 miles in my case—there’s always a sense of the exotic at the seashore. Even the smell, for us Landlockians, is overwhelming and strange and primal. For a Midwesterner, the deep and relentless sound of the ocean is, until you get accustomed to it, rather frightening in a deep-down-in-your-belly way. Although I love the sound of waves now—especially for falling asleep.

Maybe it’s because we spend the first nine months of our existence as sea creatures, floating in nice warm amniotic fluid. On some Very Deep Level, there must be a residual maternal sensibility in water for all of us. Being close to it makes us feel safe, protected, nourished. This may only exacerbate the raw fear we feel when the elements rage and the sea turns against us. Perhaps it’s like Mother turning on us?

Of course, Mr. Darwin tells us we have a deep evolutionary connection to the sea, from whence we all first slithered many millennia ago. (For anyone offended by this statement, stop reading immediately for both our well-being. I’m more than happy to debate this particular issue offline.) So maybe at our very innermost DNA level, we feel that elemental pull of water.

Having grown up on the prairie in Skeeterville, my earliest relationship with water watching came in the form of rain. I’ve always loved rainstorms. Also thunderstorms, the bigger the better. We had a huge front porch on our house in Illinois and it provided the perfect viewing stand for big, roiling, booming summer thunderstorms. And that sweet, fresh smell of ozone in the air after those awesome lightning shows was magic. And yes, as any Midwesterner will adamantly agree, you can smell storms coming. The trick was to dash around the corner to the neighborhood liquor store and get a cold Pepsi and a Hostess Fruit Pie, then get back to the front porch before the storm front hit. Such were the challenges that plagued my youth. 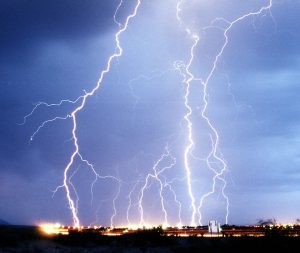 Not everyone in the family was so enamored of thunderstorms. My oldest brother was—maybe still is—terrified of thunderstorms. The reasons for this are lost in the mists of time, but my grandmother was also hugely frightened of thunderstorms, so maybe it was genetic. This is surprising in retrospect, since I’m absolutely certain it was the only thing in heaven or on earth my grandmother feared. She would grab her flashlight with the big square battery and head down to her basement at the first whiff of a storm. She even had a telephone installed down there—when it was considered a wild extravagance in Skeeterville to have a phone anywhere but the kitchen—so she could call my brother to commiserate about the current storm and speculate on the impending end of the world and whatnot.

My mother imposed a ban on incoming calls to our house from Gramma during storms, lest my brother be permanently scarred. Which I’m pretty sure he was anyway. But probably not by storms. (This didn’t dissuade her, mind you, and my father finally told the bald-faced lie to his mother that lightning seeks out active phone lines and will electrocute anyone using said phone. That finally shut her up.) 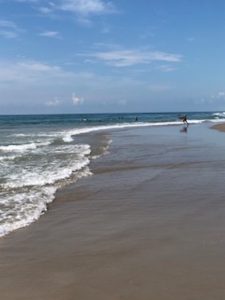 Whatever the reason, I can sit and watch water in almost any form for hours. Beaches are great—I can while away an entire day under a beach umbrella in a canvas chair, alternately reading and napping, without the slightest twinge of boredom. Love it. It’s my essential vacation thing. Sitting by our lake doesn’t make me immediately sleepy, like the seashore, so I can stay out there from morning to twilight. Until the mosquitoes threaten to carry me off. I can actually feel my heart rate and breathing slow—proof of the Zen properties of water. 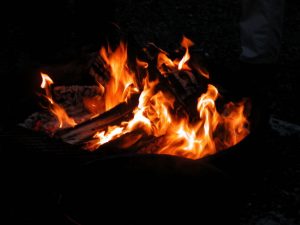 Come to think of it, the only thing I can stare into for anywhere near as long as water is… a campfire. This began long ago, too, although I most vividly remember obsessing on campfires when I was in Air Force survival school. We were dropped out in the deep woods and, cold and hungry, did the only thing we could. We watched the campfire—“survival TV”—each night until the last ember disappeared. Of course, there were bears and wolves in those woods, so that might have had something to do with it.

[If you enjoyed this short read on the zen of water watching, then take a Deeper Dive with the zen masters at Relax Like a Boss .They’re the genuine article. And if you meet the Buddha on the road, give him some low bones for me.]