You Have Permission to Eat Out on Thanksgiving 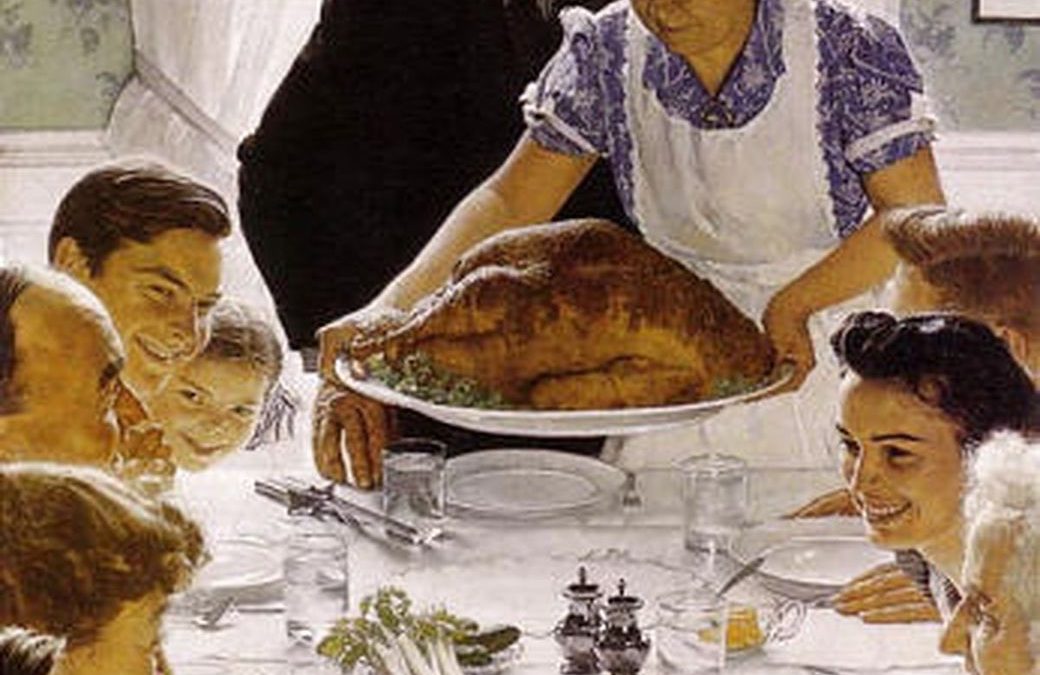 I haven’t engaged in a public act of apostasy in at least six or seven days. OK, maybe two or three days. All right, how long since my last tweet? Whatever, I feel like I’m overdo, so here goes.

You have permission to eat out this Thanksgiving. 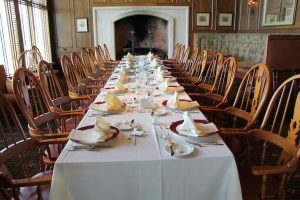 Let’s face it, Thanksgiving is always a somewhat trying holiday with a very iffy cost-benefit analysis. The travel schedule is way too compressed. Nobody short of those Downtown Abbey people can possibly seat everyone comfortably. And with the Current COVID Unpleasantness raging, any attempt at conversation is going to be like playing hand-grenade bocce. With the pins pulled.

Really, the last thing we need is for the Person Responsible for Cooking to spend thirty-six straight hours sequestered in the kitchen making molds out of strawberry gelatin and cream cheese. Or for The Affable Doofuses Who Don’t Cook to endure thirty-six hours of sheepishly asking if there’s “anything I can do” while loping through the kitchen to get another beer. 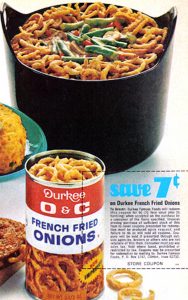 On the other hand, there is the availability of large amounts of Durkee’s french-fried onions left over from the three tablespoons you need for the top of the green bean casserole. And that’s not nothing.

But no, unless there is someone in the family who genuinely enjoys all this kitchen drudgery—and I’m making allowances here for my deceased Great Aunt Bess and/or the Amish—you should actively consider the alternative of eating out for Thanksgiving dinner. Reservations are highly recommended.

Think of the advantages! Nix the above-mentioned thirty-six hour Kitchen Death March! All your relatives with an Inability to Modulate Alcohol Intake are on their best behavior in public! Possibly. But the restaurant staff will be responsible for 86ing bibulous Uncle Mick, thereby saving you from much family drama and possible disinheritances. No mountain of dishes to wash—the ones you forget you even own between Novembers! And perhaps most important, no disgusting turkey carcass of which to rid yourself! And please do NOT send me any “Turkey Frame Soup” recipes. Nobody since World War II has actually made a Turkey Frame Soup. And I do not want to make anything made from a “frame”—sounds like you’re cooking the undercarriage of a ’62 Impala. 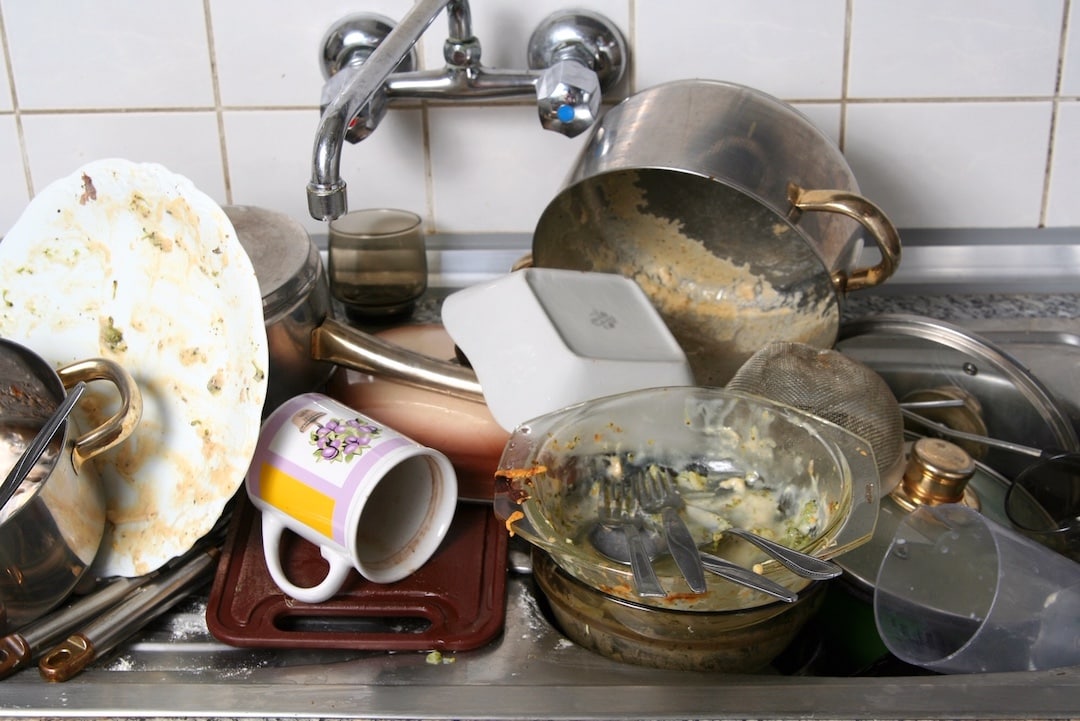 OK, there are a few things to be said for stay-at-home Thanksgiving. We all have this image tattooed on our cerebrum by that evil, evil Norman Rockwell of The Perfect Thanksgiving Tableau. You know, Granny about to set the perfectly golden turkey on the table while the hungry and adoring family watches all wide-eyed? Well, here’s a newsflash for my extended family. My mother was that “Granny” and couldn’t hold a Pez dispenser at arm’s length, let alone a 19-lb fowl. And she was a lousy cook anyway. (Editor’s Note: When the author and his wife spent a last Thanksgiving with said mother, they ate out. For which they were truly thankful.)

At-home Thanksgiving also enables the kind of shameless and unapologetic gluttony for which the holiday is deservedly renowned. Conveniently, some stalwart professional athletes, by which I of course mean NCAA collegiate football players, selflessly give up their own holiday so that we have a straight-faced reason to man- or woman-spread on the couch, rubbing our bellies and moaning for a few quarters until our stomach frees up enough space to proceed to the Many Pieces of Pie Hidden Under Cool Whip phase of the festivities. 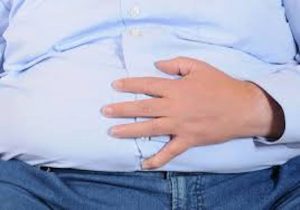 An old work colleague of mine was the only girl in her family and the youngest of six. Doing the math, this means she had FIVE older brothers. (It was literally impossible to offend this lady.) She told me once that at Thanksgiving, her brothers tried to outeat each other. Their standard response when asked if they were finished was, “I’m full, but I ain’t sick yet. Pass the potatoes.” Is there anything more genuinely American than that? 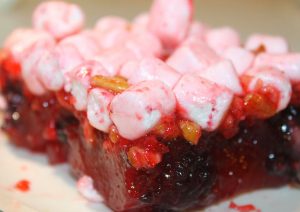 There are other culinary benefits to doing Thanksgiving at home. Because restaurants have actual professionally trained cook staff with high-falutin’ ideas, it’s highly unlikely you’ll encounter two near-mandatory staples of Thanksgiving. I am of course referring to a) cranberry “sauce” in a perfect cylindrical shape with can marks impressed into it, and/or b) any Jell-O salad containing much-beloved mini-marshmallows. I mean, kids get to say they’re eating “salad” with marshmallows in it, for cryin’ out loud.

But let’s look at the facts. Admittedly, that is something we Americans have shown a distinct aversion to doing these last few years, but let’s give it a go, shall we? It turns out that 77% of Americans say that when they cook, they spend less than 30 minutes preparing a meal. And too many of these respondents, “preparing a meal” consists of a) “open here,” b) “slit in two or three places,” and “microwave on high.” Or alternatively, “Keep the change, Domino’s Guy.”

Who Cooks at Home… Except for Pandemics? 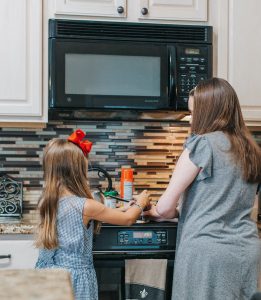 On top of that, Americans cook just 58% of dinners at home anyway. So we’re talking four out of seven nights a week, three-quarters of us microwave or order delivery. In many American households, the oven part of the range is only turned on once a year—on Thanksgiving. I mean, that makes doing Thanksgiving at home downright dangerous. Think of it this way. If you were taking the bus to Aunt Tilly and Uncle Bub’s for Thanksgiving and, stepping onboard, the driver said, “I haven’t driven a bus since last November, but it’ll be fun!” what would you do?

We Americans are nothing if not tenacious. Some would say “pig-headedly stubborn.” Others might say “collectively self-delusional.” As a result, only 10% of families report that they will eat Thanksgiving dinner at a restaurant. So Obama was wrong when he said we only “cling to our guns and Bibles.” We cling to our Butterballs, too!

Heading for the Buffet 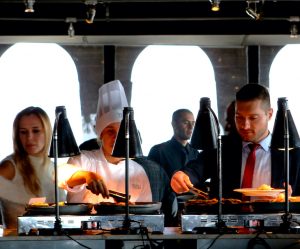 On the other hand, my guess is that 10% is steadily creeping up, but I have no data to back that up. I also suspect that a lot of respondents to the poll were too embarrassed to admit they ate out on Thanksgiving and lied about it, mostly because of that evil, evil Norman Rockwell.

In the end, it’s your choice. Some may opt for the convenient and headache-free Thanksgiving Out. But I know most of us will opt for the traditional Thanksgiving In. There are some things more important than ease and reduced hassles, after all. For the years of my youth, I wouldn’t have missed out on any family gathering where Dad’s cousin George would get a snootful of Jim Beam, go sit in front of the steam radiator, and sweat like a horse while he sang, “Under the Chicken Tree” over and over. Some things money just can’t buy.

But whether you’re an Innie or an Outie, do step back, breath deeply, and consider all the things, big and small, for which you’re truly thankful. Especially those mini-marshmallows.

[You can get the third book, No Hero’s Welcome, in my First World War and 1920s trilogy here or here. And guess what? I’ve lowered the price of my None of Us the Same ebook to only $2.99 which you can get here and here.]