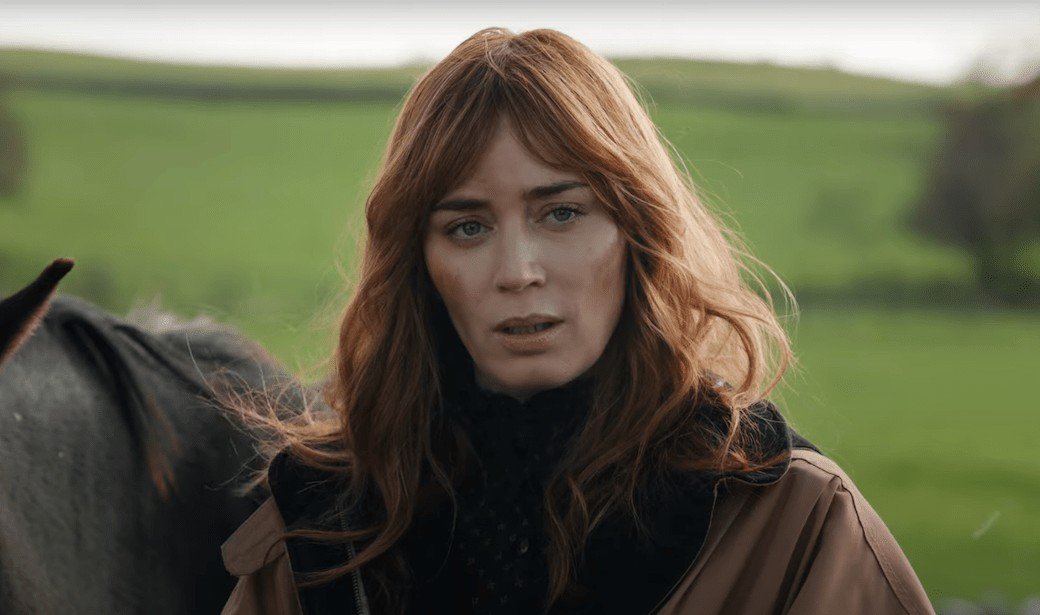 We require a bit of diversion from the 24/7 Cray-Cray to which we’re currently subjected. In that spirit, me mind bein’ bent on ramblin’, to Irish Trad music I do fly. I have three reasons for this. First, another Big Studio motion picture “opened” yesterday, entitled Wild Mountain Thyme. This is the title of a marvelous old Irish Trad song. By “opening,” this being Wild ‘Rona Time, I mean “in theaters” showing to 16 people and “on demand” where the rest of us will watch. Or won’t. 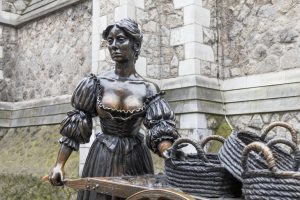 Second, my grandson Goober has become quite the little music man. After teaching him “Molly Malone,” he’s decided he must now learn Very Many Irish Tunes.

Third, I love Irish Trad [Traditional] music. And I know the lyrics to 98.7% of all Irish Trad songs ever. I’m pretty sure. I raised my own kids—all now first-class musicians—on a steady diet of Irish Trad. And now, I’m burdening the grandkids with it, too.

I note that the Current Occupant of the White House has exactly 0% Irish DNA. By contrast, the Next Occupant is a Semi-Professional Irishman,. With all the aforementioned rolling around in my brain, I said to myself, “Self, let’s prattle on about Trad music this week.” 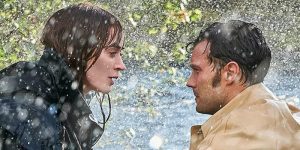 Now back to the movie. I just watched a trailer and it’s delightful. The movie stars the eminently talented and easy-on-the eyes Emily Blunt (who is English). It also features the quite talented and equally easy-on-the-eyes Jamie Dornan (who is Irish). Emily Blunt sports a hairdo suspiciously reminiscent of Dakota Johnson’s, but I spotted no handcuffs, whips, or leatherwear in the trailer. So consider this outing as “Fifty Shades of Green” for Jamie Dornan. Although he might take off his shirt and/or flash his bum, it being a love story.

John Hamm is the third apex of the inevitable love triangle  I need say no more than he appears to be portraying… John Hamm. And does he really need do more than that after Mad Men? 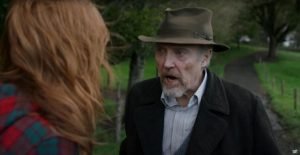 For the cream on top of this delicious Celtic confection, Jamie’s father is played by… Christopher Walken. No one could have seen this coming. If you close your eyes, he does a passable faux Irish accent. If you open your eyes, well, it’s CHRISTOPHER WALKEN with an Irish voice emanating from his Borough of Queens pie hole. And it’s marvelous to behold.

From a snippet of the trailer, Emily Blunt’s Rosemary (of course) sings the eponymous tune, “Wild Mountain Thyme.” Kinda seems mandatory, it being the title and all. It’s an utterly haunting and lovely song. So I’ll be watching this weekend and you should, too. Because Ireland.

I sang Irish tunes to my grandson, Goober, when he was a baby, pacing the hallway to quiet him and give my daughter, Peanut, a break. He was particularly fond of—or at least stopped screaming during—the chorus from “Dublin in the Rare Ould Times.”

As the light declines.

In the rare auld time.

Must have been the tune, because the song is about a brewery cooper—a barrel maker, for you heathens—who lost his job when Guinness converted to aluminum barrels in 1950-something. He then loses his girlfriend to an English university student and commences a long career as a drunkard. The rest of the song bemoans his beloved and familiar Dublin Town modernizing into a soulless city.

Real lullaby material, that. But it points to a curious thing about Irish music, and something-5-year-old Goober asked me about last week.

All Those Merry Wars

G.K. Chesterton, an English toff and wannabe Irishman who died 90 years ago, famously said of the Irish,

The great Gaels of Ireland are the men that God made mad,

For all their wars are merry, and all their songs are sad.

True enough, as Goober has discovered. He’s become so fond of “Molly Malone” (poor street vendor who dies of nameless infection), that he has demanded I teach him more Irish songs. Thus far, these include:

“The Black Velvet Band” (guy falls for pretty girl who makes him an accessory to felony larceny and gets him transported to Tasmania).

“Star of the County Down” (infatuated young farmer who becomes what can only be described as a stalker).

“The Fields of Athenry” (husband about to be transported to Australia for stealing wheat so his children won’t starve).

“Spancil Hill” (dream vision of immigrant in the California Gold Rush, miserable fove rleaving his true love behind in County Clare). This is the song I obtusely riffed in the opening paragraph, BTW.

Chesterton might be onto something. Goober picked this up and called me on it, too. Let’s say it’s an ongoing discussion, including why the Irish lost all those “merry wars.” A curious race, to be sure. 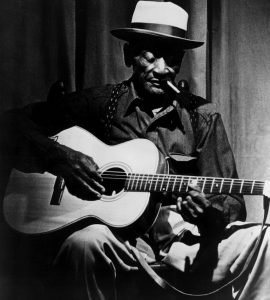 I’ve long pondered why, besides the genetic and attenuated family connection, I’m so drawn to Irish Trad music. I’ve landed on this explanation. Trad music is… Irish blues. And I’ve loved the blues, since I spent some formative years in the capital of the Mississippi Delta, New Orleans.

In lots of ways, African American blues and Irish Trad arise from similar experiences of poverty and deprivation and oppression. Sure, the Irish were never legally slaves. tBut o several centuries of Irish peasants, that would’ve appeared a distinction without much difference. They were tied to the land, beholden to capricious landlords, and deliberately kept in ignorance and fear for generations.

As with African Americans, an oral and musical tradition of shared suffering and nurtured hope arose out from their wretchedness. The speaking aloud of their woes, the singing out of their struggle, was an integral part of the culture. Although the Irish were miserably poor, they gathered around a communal hearth in the deep of winter or the height of summer to lift themselves with stories or poems or songs.

All Those Sad Songs

Goober listened to one of the Irish songs I’ve been teaching him at home with his parents. He confronted me with, “They sang that song faster than you and some of your words aren’t right.” This led to a Very Teachable Moment for me and young Goobs.

I explained to him how the Irish music tradition is an aural and oral tradition. That it’s only recently the jigs and reels, ballads and laments, were written down. The music had long been passed from one singer or fiddler to another. It’s still standard for Irish musicians to say, “I got this song from Fionnuala Madigan.” Someone gave the song to them. How cool is that, really?

Of course, the very act of NOT writing it down led over the generations to an organic evolution of the music and lyrics. You could insert your own town or someone you knew or your own time. It made little difference musically, but created kaleidoscopic variations.

Like Joe Biden, I’m a semi-professional Irishman. I was surrounded growing up by the mythologized and housebroken pseudo-Irishness of Irish America. A lot of this revolved around my childhood Catholic parish. (My hometown of 16,000 had FOUR Catholic parishes.  One each for the Irish, Germans, Slovaks, and Poles. They now have one.) 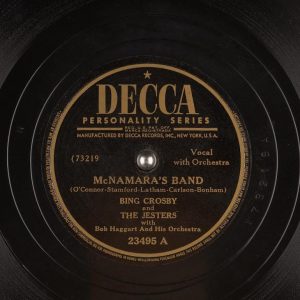 My First Grade teacher, Mrs Cronin, regularly led us in music-hall Irish songs like “McNamara’s Band” and “If You’re Irish, Come Into the Parlor.” The local Knights of Columbus—Dad was a Fourth Degree Knight—had a Sons and Friends of Erin subsidiary. There were vestigial sighs and displeased looks from the Ould Ones if we dated non-Irish girls or guys. (My wife, being Polish-German, got a pass only because she was imported from out of town. So she was considered An Exotic Variety.)

My choice of a military career led me back to the songs I’d learned as a kid. This lured me into expanding into broader—and more genuine—Irish Trad music. I saw my three kids growing up as Air Force brats, dragged from pillar to post every few years. This made them independent and unafraid of new things, but also rootless. Having lived in the same house from birth until I went off to college, daily surrounded by a big extended family, I regretted my own kids missing out.

So teaching them the stories and songs of the family’s not-so-distant past provided them a sense of their place in a broader and deeper narrative. Perhaps that made the anonymity of modern life  a little less alienating for them. I don’t know–but they all learned “Wild Mountain Thyme,” I assure you.

So Goober and I will keep on singing Trad tunes. Likewise, I’ll continue explaining why all the wars are merry and all the songs are sad. I sense he’s getting it. That one’s a smart little ~17% Irish boyo.