What the Heck Happened to Tomatoes?

Before the age of 30, I really was not a fan of tomatoes. I love them now, truly love them, but I’m a Very Selective Tomato-Eater. My problem with them in my growing-up years was they always seemed so… unfinished. That and we only ever had store-bought tomatoes from the National Tea supermarket across the bridge on the other side of the river.

The other problem with me and tomatoes is that I have no memories of a time before American supermarkets endured the Invasion of the Square Tomato. 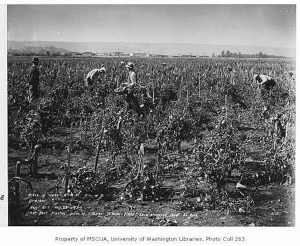 It happened this way. Real, original tomatoes—the ones now called “heirloom” for which you pay a Big Chunk of Extra Money—had to be picked by hand. They were too soft and squishy and juicy and all-around luscious to be picked by a machine. So most tomatoes grown on commercial farms were picked by a lot of Mexican migrant farm workers under the so-called Bracero program. This program began during WWII to get farm workers into the US because a heckuva lot of American farm workers had been drafted and were otherwise occupied shooting Nazis. Mexico wasn’t in the war and had a lot of people willing to pick tomatoes for what was then a decent minimum wage of 30 cents an hour. So a win-win situation.

By the ’50s, American unions weren’t real fond of the Bracero program, I guess for what at the time seemed like good reasons, and managed to convince Congress to kill the program in 1964… when I was four years old.

This set off a mad rush to come up with a way to mechanically pick tomatoes. A couple of University of California at Davis scientists, Hanna & Lorenzen, had been working on just such a machine since the mid-’50s. Apparently, they were the regular butts of jokes around the faculty lounge water cooler, something about making the world’s largest tomato juicer and whatnot. When Congress nixed the Bracero program, these two guys had the last laugh and their dance cards filled up pretty darn fast.

Early on in their research, Hanna & Lorenzen had determined there were really only two ways to make their whole Tomato Pick-o-Matic idea work. They could a) build a gentler machine, or b) build a tougher tomato. They spent a few years working on Choice A—hence the tomato-juicer jokes, but quickly decided to hedge their bets and work in parallel on Choice B. Their efforts to hybridize a really durable and uniformly sized tomato were much more successful than their attempts to mechanically replicate the fingers of cheap Mexican migrant workers. 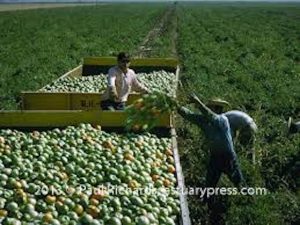 Only one problem. When some of their colleagues pointed out that their new Bad-Ass Tomato had the texture of a mouthful of pea gravel and absolutely no taste whatsoever, Hanna & Lorenzen replied, “Bah! Taste and texture? Who really cares about taste and texture? This is America! We can pick these babies CHEAP!!!”

Thus did their derisively nicknamed Square Tomato become the American standard tomato, cheap and available all year round. This non-seasonality was greatly enhanced when it was further discovered that tomatoes could be picked green—and even more flavorless—then forced to ripen and turn red by gassing them with ethylene. And mercilessly whipping them. OK, I made that last bit up. 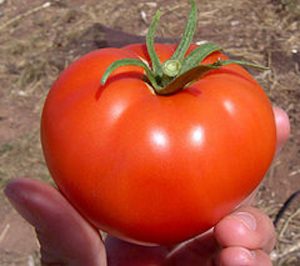 So this was the tomato of my youth. Even as a boy, I truly despised this mealy, flavorless, nasty fruit. (STOP! Once and for all, a tomato is a fruit, not a vegetable.) The thing is, supermarket chains love it and food processors utterly adore it. The Square Tomato was everywhere by 1968 and we’ve been overrun with cheap, Cheap CHEAP!!! tomatoes ever since. Food processing companies buy them by the trainload. Whatever they lack in flavor—basically everything—the processors replace with their go-to primal-button-pushing additives, salt and sugar. Bam! 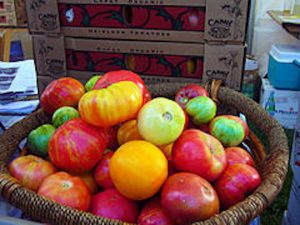 Now we’ve come a long way over the last 25 years or so in regard to what are euphemistically called “slicing tomatoes.” You know, the kind you actually put in your mouth and eat without doing much else to them? Like on BLT’s or in salads? The organic and foodie and farm-to-table and slow food movements have all sparked a revived interest in eating tomatoes that taste like old-timey tomatoes, not red rubber balls. Seed savers are all over the place. And most supermarkets now carry heirloom varieties—and even some varying commercial varieties. Now you see Brandywines and Black Krims and Cherokee Purples. This in contrast to my vivid memories as a young adult when there was exactly one sign in the produce section that said “Tomatoes” with a low, Low, LOW!!! price. 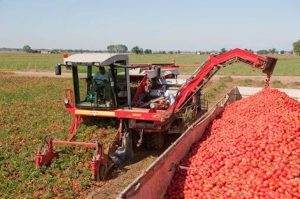 It’s easy—and fun—to pin this on misguided immigration and labor policies, rapacious food companies, and technology-obsessed scientists. And sure, these all bear part of the blame. But in the end, our long sufferance of the Tyranny of the Square Tomato is ultimately our own fault. Somebody has to be willing to plunk down cash and put the nasty thing in their mouth. That’s on us.

It really shouldn’t be a surprise. We’ve become an infantile race of spoiled brats for whom need, want, or whim produces a tantrum of “I want it NOW!!!” (And yes, I’m an Amazon Prime customer and love that next-day shipping, too.) The discussion about tomatoes ought to go something like this:

Human Person 1: “I could really go for a tomato right now.”

Human Person 2: “It’s January, it’s minus 18 degrees, and there’s two feet of snow on the ground. But I have some canned tomatoes we put up back in August when fresh tomatoes were in season and plentiful!”

Human Person 1: “Excellent! What foresight you had! Let us enjoy some of your lovely preserved tomatoes in a bolognese sauce or some delicious soup!”

Yeah, right. We want a January tomato and we want it NOW! So it’s down to the Piggly Wiggly for some Square Tomatoes.

I simply refuse to eat a “fresh” tomato in January. Won’t do it because I know it will taste like a sour fur ball some cat just coughed up. I pick them off salads—which my wife Kay-Kay then eats, but hey, that’s her journey. I pull them out of burgers. I just won’t do it. But boy do I love me some summer tomatoes. So. Darn. Good.

This is not to say that I’m some holier-than-thou Food Buddha or anything. Full confession—I eat berries for breakfast almost every morning, year round. I do feel a teensy-weensy twinge of guilt when I force myself to read the label on the blueberries and discover they were grown in Chile and airlifted to my refrigerator’s fruit drawer. And yes, summer blueberries from Maine are a lot tastier.

But I WILL NOT EAT a winter tomato. And that’s final.