We Do Need Another Hero. And Another.

Happy Easter to all who celebrate this highest of Christian holy days. And Happy Passover. And a Happy Maybe-Crappy-Winter-Weather-Is-Finally-Over Day to everyone in the Northern Hemisphere. (Except for New Englanders. Because that would be cruel.) 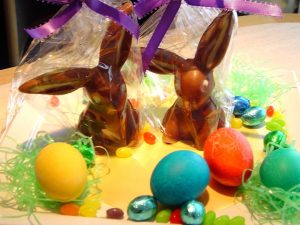 As any of you Six or Seven Who Read My Blog with regularity already know, I was raised a proper Irish-Catholic American boy, so Easter was a big deal for me growing up. Mostly because it was a precursor type-II diabetes day from all the low-quality chocolate bunnies—always eat the ears first!—and jelly beans—always throw the black ones to the dog! Although I did read in the Washington Post that a Peep© has only 23 calories—making it, apparently, a “low-calorie food.” So we have that going for us.

I can’t say I’m still a Catholic. And I wasn’t much of one for some time before admitting it to myself. I stayed in the Mass-going habit for some time mostly for ethics and aesthetics. Also out of a firm belief that my kids should be raised to hate Sunday mornings as much as I did. (Did I mention I was a Really Terrible Parent?) As for the aesthetics, I always enjoyed the quiet orderliness of Mass.

And let’s face it, no one does an Easter soundtrack better than the Catholics. OK, no one does Easter in general better than the Orthodox crowd, but they don’t allow organs and trumpets and timpani drums. Some people think Christmas provides the best Religious Hit Parade, but that’s only because everyone knows the words to all those songs, even if you only go to church twice a year. Shoot, you just need to shop at Walmart anytime after Halloween to brush up. 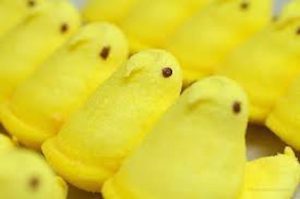 Getting to the Main Point of This Post—which often takes a meandering route—it’s the Easter story that came to fascinate me after I grew old enough to realize I actually hated Peeps© no matter how few calories they contain. This is because Easter is a truly heroic story, the ultimate Hero’s Journey, to death and back. Whether or not you believe this as an article of faith or just hear it as a morality tale doesn’t really matter for my purposes today. 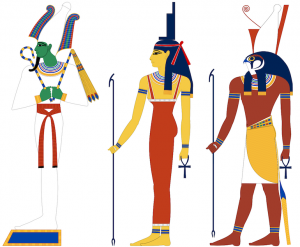 Besides the one in the New Testament, there are a lot of resurrection stories liberally sprinkled across cultures and religions worldwide. Quetzalcoatl, Krishna, Lemminkainen from a Finnish myth, Tammuz from Sumeria. Odin hung himself and was resurrected. Osiris was killed and then resurrected by his wife Isis not once but twice. Ganesh was beheaded by Shiva, but resurrected with an elephant’s head. And so it goes, in as many variations as lame Marvel Comic movies.

I suppose the death-and-resurrection story is, at a very primal level, the most amazing thing our heroes can endure. Rather than merely slaying dragons or sailing to the edge of the unknown, these heroes confront and defeat the most existentially horrifying monster imaginable—their own mortality. So whether or not you believe Jesus of Nazareth was both fully man and fully divine, we can all agree he had the lead role in an awesome Hero Quest. His is the very pinnacle of heroism.

Which brings me to the issue of how we use and abuse the revered label “hero” in our own day. 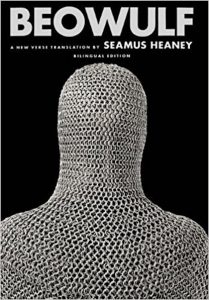 The hard nut at the center of any traditional Hero Story is the willful acceptance—even embracing—of the risk of one’s own death. As mere mortals, we can’t imagine much higher stakes, marking this as the essential nature of heroism. It’s what awes us about truly heroic acts, holds us in thrall to the selflessness of the hero.

Over the last few decades or more, for some reason we’ve started conflating this traditional notion of a hero with tragic victims. If someone is killed as a hostage by bank robbers, he isn’t a hero—he’s a tragic victim. We should mourn his tragic loss, pity his family, and condemn his killer. But he wasn’t rendered a hero by being killed. On the other hand, the French police colonel, Arnaud Beltrame, who last week voluntarily swapped himself for a woman being held in a supermarket hostage-taking and was killed in the final assault on the ISIS hostage takers, was indeed a hero. The salient difference between him and the three hostages killed is that he voluntarily accepted the enormous risk of death to free one victim and assist the others from the inside. We’re talking hero there.

Now I’ll just say it. The terrorist attacks on 11 September 2001 really muddied things up. The people who died at work in the World Trade Center towers and at the Pentagon were tragic victims. We should always remember the senselessness of their deaths, weep over the tragedy of their loss, and do all we can for their families. But we should not make them heroes. 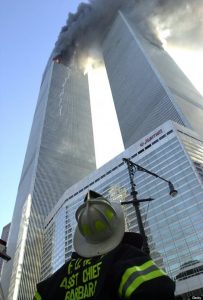 The heroes on 9/11 were not the people who died trying to get down the stairs of the Twin Towers. The heroes were those who died trying to get up those stairs. The firemen and cops and medics who willingly and knowingly risked their lives going into flaming skyscrapers in an ultimately futile attempt to get many hundreds of victims out were performing heroically selfless acts. That’s the essence of heroism.

Kay-Kay and I raised three children who all turned out to be Fairly Decent Grown-Ups. We weren’t heroic, we were just parents. I recently heard a commentator on a NPR radio program say, “All parents are heroes.” Well, no we’re not. I’ve never been called upon to risk my own life in order to save my children. (Kay-Kay gave birth to them, so I’d put her closer to the “hero” end of the spectrum than me.) Sure we struggled sometimes to do necessary parent stuff, but that comes with the territory when having kids. Are some parents heroes? Sure, just like some police officers or soldiers or air passengers are heroes. But most are not—we’re schlubs putting one foot in front of the other trying to get through life while staring into the Frightening Abyss of the Grim Reaper.

Does it matter? Isn’t “hero” just another word, after all? And haven’t we confirmed recently that words can be made to mean anything? Sometimes even nothing? Why can’t “hero” be watered down and denatured like every other noun in the language?

Because we need our heroes—true heroes who set an example of willing self-sacrifice, who show us maybe there are some things more important than life itself, who set a benchmark of what our better angels are capable, who provide an aspirational goodness to teach our children. And all that is mighty important to us, both individually and collectively. 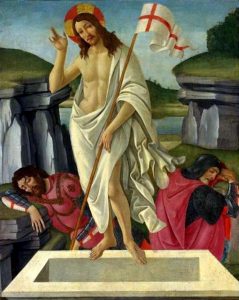 It’s Easter, when many commemorate Jesus’s conquering the tomb, rising to new life. But what makes this an eternal story is that he willingly accepted what he knew would be an excruciating and humiliating death, a death which the Gospels tell us he had the power to avoid altogether if he chose. It was this selfless embrace of death that makes the story so remarkable to us mere mortals.

If we recklessly throw around the label of “hero” as we’ve done more and more of late, we’ll lose touch with the very specialness of heroism. And when we lose that, we’ll have lost something of inestimable value.