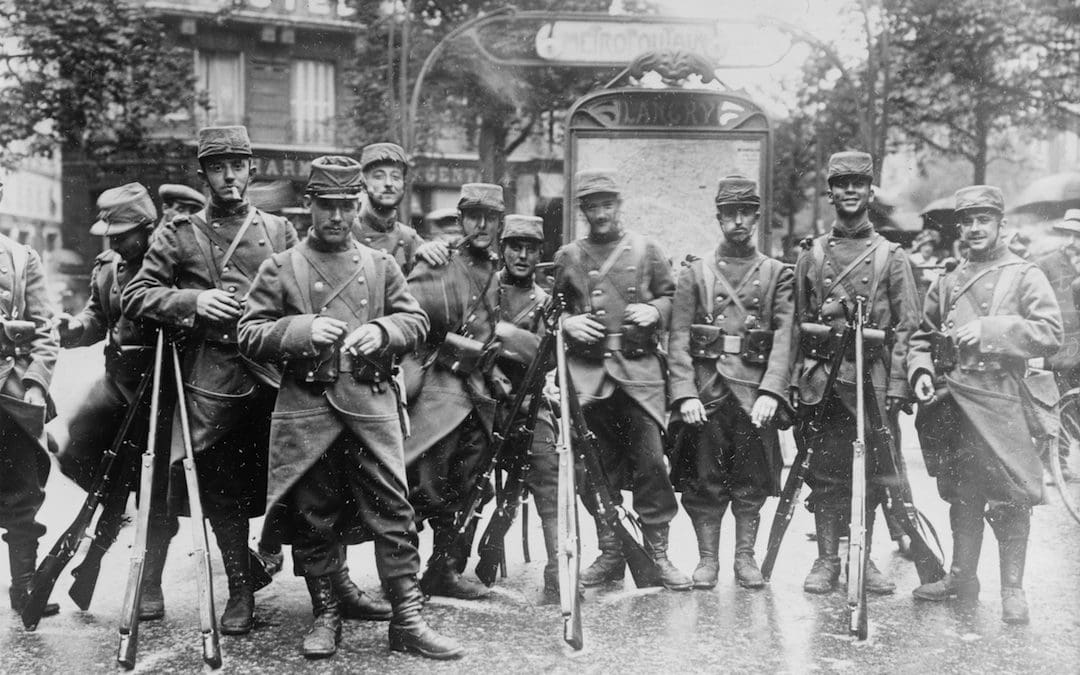 (Captain Fabien Aubert is a supporting character in the second book of my First World War & 1920s trilogy, Truly Are the Free.)

Captain Aubert—or should I say Father Aubert—what is a Jesuit priest doing in the uniform of an infantry officer in the French Army?

I am sure that seems peculiar to you, an American. Did you serve in your military, Monsieur Walker?

I did, for 20 years, but my readers are more interested in you than in me, I assure you. And yes, it would seem very strange to see a Catholic priest serving as an infantry officer in the American and really most other armies. 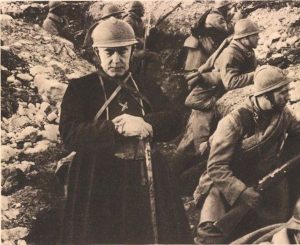 But America is not France. From the defeat and overthrow of Louis Napoleon in 1870 and the beginning of the War in 1914, our Third Republic had over 50 governments. It was quite chaotic. Because the Catholic Church was so supportive of the monarchy, the Republican parties became quite anti-clerical. This was only exacerbated by the conservative Catholic elements during the Dreyfus Affair. In the decade before the War, the anti-clerical radical party was the largest in the Parliament. Is it any surprise then that the republic drafted priests like any other men?

Your English is remarkably good, Father, excuse me, Captain. Where did you learn your English?

As you may know, the Society of Jesus, as the Jesuits call it, demands much education from its priests. For mine, I was sent to seminary in Montréal. As the largest city in Québec, it is as English-speaking as it is French. You could say I learned English as much in the cafés as I did in the classroom.

Is that why you were assigned as liaison to an American regiment in 1917?

Certainement, but also because I have been in the infantry, in the trenches since August 1914. And the Americans, so big and enthusiastic, well, they had no idea what kind of war they were coming to. I had managed to survive more than three years where many better men had died, so I assume it was my English, my experience, and my good luck that led me to an American regiment.

The American regiment to which you were signed, the 369th Infantry, is a “colored” regiment. Did you find that particularly challenging? 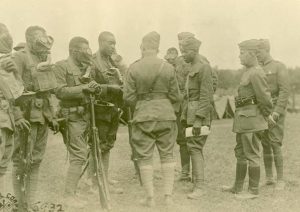 Ahh, I know to where you are heading, sir. While I was studying in Canada, I had an opportunity to travel the United States. I saw, in a small way at least, the problems you Americans have between white men and black men. Yours is a very troubled history of the races. For the French Army, we have long experience with colored troops. We have long used infantry from Senegal and the other African colonies, as well as the Muslim tirailleurs from North Africa. So French officers have no problem leading such soldiers. And our private soldiers—our poilus—would not care if the men in the regiments next to them were black or orange or purple, as long as they did their duty. So no, I found no difficulty in assisting your Negro soldiers. In fact, I have found them to be fiercely loyal and hard-working, excellent riflemen.

So the French Army was pleased to have fresh soldiers to help fill their divisions?

Oh oui, monsieur, very pleased indeed! You must remember that, even though the United States declared war in April 1917, its soldiers did not arrive in France in great numbers until well into 1918. The French Army had been bled white, had suffered so greatly, particularly in 1916 when we fought both on the Somme with the British and made our long and bloody stand at the fortress of Verdun. That is where I fought in that annus horribilis. By 1917, we faced mutinies in every division of our army. There was little prospect of going on the offensive, to drive the hated Bosche from la Patrie, so we sat in our trenches and bunkers waiting to be shelled. There were only a few American divisions in France when the Germans launched their Spring Offensives in March 1918. A few American regiments, like the 369th, were rushed into the French lines, as were any other available troops. We might have lost Paris. We French were overjoyed to have any assistance to stop the Germans, our own forces being so depleted and exhausted

Did you stay with the 369th to the end of the war? Through the battles of the last Hundred Days?

I did. The regiment fought as bravely as any men I have ever seen and covered themselves with glory. By the end of the War, they had won 150 Croix de guerre, the highest military medal bestowed by the French Republic. Many Sammies—this was the affectionate name we gave to the Americans—said to me that if they fought a man’s fight in France, they would be treated as men when they returned home. I can attest to them as the bravest of men. I hope they will find the respect they seek in their own homeland.

Wasn’t the 369th one of the first regiments to be returned to the United States? How do you explain that?

One never knows. Only General Pershing could answer that question. I have my suspicions, however. You see, the 369th was given the honor by the commander of our Fourth Army, General Gouraud, to lead the march to the river Rhine. When we reached the river, so sacred to the Germans, the commander of the 369th, Colonel Hayward, knelt in the mud at the riverbank, cupped his hands into the water, and drank deeply. Well, it did not take long for word of this—what do you call it?—stunt—to reach the ears of General Pershing. I suspect this had much to do with the hasty departure of the regiment.

As a Jesuit priest, having spent so many years in university and seminary, didn’t you find daily life with your men—the poilus—somewhat shocking? 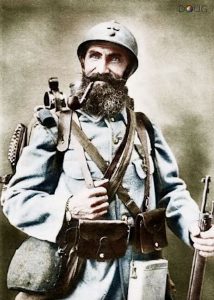 Mais bien sûr. I had never heard such language before, but it was one of the ways they coped with the unending fear, so I am certain God will forgive them. They became close and dear to me. An example? Sergeant Lucien Barthold, a man who fought by my side from those first days in the open fields of Belgium through the horror of Verdun and the trenches, came over with me to help train the Americans. We could not have been more different, Sergeant Barthold and I. He came to the Army as an atheist, a socialist, a barrel maker from the Burgundy region. In the trenches, he hated everything about the Catholic Church. I suppose—at least I flatter myself by hoping—everything except me.

You have experienced the loss of many men under your command. It must have been a terrible thing, the deaths of men with whom you served for so long?

Yes, it was quite terrible. But didn’t every man who died in every battle have a special friend or comrade to grieve his loss?

So then, Captain Aubert, what is to become of you, now that the guns are silent?

I shall lay aside my uniform and take up my cassock again. I will go wherever the Society of Jesus determines I can best be of service. If I may hope for anything, let it be someplace quiet and without so much death. I could only pray silently for my men, those who were dying or frightened, because I was not allowed to minister while I served in the Army. Therefore, monsieur, I have a fifty-one month debt to God that I hope to repay before my own years are spent.

And what of France, Captain Aubert? What do you see for her future? 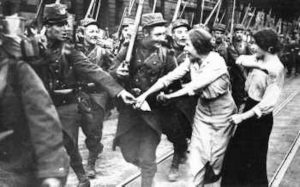 Now that is another matter entirely. She has lost so very much, one in four of her young men dead, another quarter maimed for life. We have laid much of an entire generation below the ground. I do not know how a nation that has suffered such loss can ever fully recover. So many women not married, so many children not born. The loss is staggering, incalculable. One thing of which I am entirely certain. We cannot, we will not, suffer another war like this for it would mean the end of the French nation.

(The anticlericalism of the French Republic dated to the French Revolution. In 1882, the Third Republic’s government had established mandatory free public education, breaking the Church’s near-monopoly on education. By 1905, the separation of Church and State was enshrined in law and the anticlericalism of the Radicals and other Republican parties had cut the number of Catholic clergy in France by half. Like Captain Aubert, priests were not exempted from military service—the French Army had no uniformed chaplains—and 33,000 priests served in the trenches, many as officers, and 4,600 would lose their lives.)