Over 100 years have passed since the guns fell silent in France, marking the end of the First World War. The War to End All Wars. I’ve written historical fiction set in that era. To commemorate this tragic period, for two months prior to the 100th anniversary of the Armistice, i dedicated my weekly blog to the voices who have moved so many of you, impacted so greatly by the violence of the First World War and the peace that followed. Although fictionalized, these characters’ recollections evoke a true sense of the  devastation and the lives undone.

(Lieutenant Chester Dawkins of the 369th Infantry, “Harlem’s Hell Fighters,” is a main character in the second book in my First World War & 1920s trilogy, Truly Are the Free, which was just given a 2018 finalist award for Best Historical Fiction by the Independent Author

Network. Chester also appears as a minor character in my first book, None of Us the Same, which has been short-listed for the 2018 Goethe Award.)

Lieutenant Dawkins, you’re a New Yorker, is that correct?

I’m New York born and bred, like my father before me and his father before him. I grew up in Harlem, where my father was a respected physician within the Negro community. He just passed last year, while I was with the regiment in South Carolina.

I’m sorry to hear that, Lieutenant. So before you left for France? 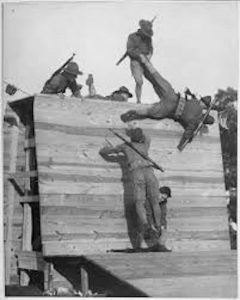 Yes, that’s correct. I couldn’t get leave to attend the funeral. We were under tremendous pressure to ready the men for France as quickly as possible—and they were far from ready, Mr Walker—so the commander determined that no officers could be spared.

I noticed earlier that you were speaking quite fluently with a French soldier. Did you study the language in high school? When you were at university?

There was no need. I learned it at home. Although my father came from a long-established freeman family in New York City, my mother was from New Orleans, her family being known in Louisiana as colored creole. Grand-père was a successful pharmacist and college lecturer. He had taken an appointment at what was then the brand-new Howard University in Washington, DC. That was where my father studied medicine. It was also where he met my mother, the lovely daughter of his pharmacology professor. I’m sure he would say finding the love of his life at Howard was of much greater value than his medical degree.

So you learned French from your mother?

She was most fastidious about it. My sister, Lena, and I were required to sit with her after supper for at least an hour every night. And it was seulement français—only French—at those times. She also required we write in French to all our aunts and uncles and cousins in New Orleans. Maman scrutinized those letters closely for proper spelling and grammar, too. She had us read aloud in French as well. Balzac, Hugo, Flaubert, Guy de Maupassant—Dumas for me, when we were younger. Even some Molière and Racine, although I could hardly make heads or tails of them.

We spoke French whenever our father wasn’t home. Much as he adored my mother, he never felt comfortable speaking French with her. I suppose he feared not being perfect enough. He told me after she passed—that was during my first year at Howard, studying law—that he regretted not having made more effort. But by then it was too late, wasn’t it? She was the loveliest woman I’ve ever known. My sister favors her greatly. Now haven’t maman’s efforts paid off? My sister, Lena, was green with envy at my being shipped to France, you know, although I doubt she envisioned the shelling and shooting.

You chose to study law instead of medicine? 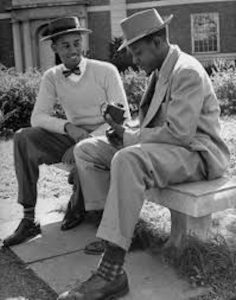 Yes. It only caused a mild ruction with my father. There were several lawyers in the extended family—my father had an uncle who was a lawyer in Brooklyn. And as long as I chose a respectable profession—medicine, law, dentistry, accountancy—that would suffice not to drag down the family reputation. There’s no memory in my family on either side of the experience of slavery, after all, so we’ve been a “respectable” colored family back a hundred years or more. For whatever that’s worth in America.

Is it your law degree, your family’s position in the community, that allowed you to serve as an officer?

Yes. I’d just finished my law studies at Howard in 1916. The regiment had been authorized by the legislature in 1913, but wasn’t put together until the summer of 1915 when the new governor moved the project forward, so things were still a bit chaotic when I was commissioned a lieutenant. We were a National Guard regiment raised entirely from the Negro community, the 15th New York Regiment.

But your regiment is called the 369th here in France, isn’t it? 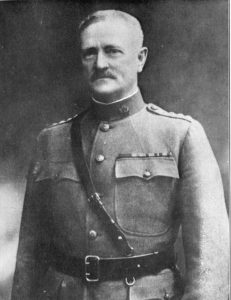 They declared us federal troops when we reached Europe, changed our name to the 369th US Infantry. Then General Pershing chopped us over to the French and we became part of their Fourth Army. You see, Pershing wouldn’t allow colored troops to fight within one of his white combat divisions, although he was happy enough to have Negro soldiers unloading his ships and building his base camps.

When the US entered the war, our commander had fought long and hard to have us included within the new 42nd Division, the “Rainbow Division” formed up with National Guard units from across the country. He was finally informed by the Army Staff that “black is not a color in the rainbow.” But Pershing was pressured by the War Department to put us and a few other colored units into combat. He squared the circle by packing us off to the French—who were in no position to be particularly choosy.

You’ve been in the front lines with the French ever since?

Beginning in March [1918]. We’re moving up north soon, rumor has it to join in a big push led by the American 1st Army. We’ll be on their flank, however, with the French. Maybe this will be the straw that breaks the Germans’ back, although most of the senior officers think we won’t finish the fight until 1919.

Your commander, Colonel Hayward, all the senior officers, and half the junior officers are white. 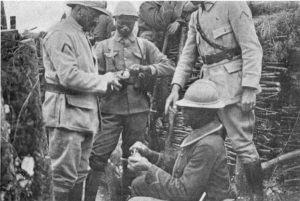 That was the bargain made when the 15th was formed. The powers that be weren’t about to allow a colored man to command a regiment, were they? I suppose we should feel fortunate we have a few captains, better than half the lieutenants. It’s progress, I suppose. W.E.B. DuBois and the other leaders of our community told us that if we fought a man’s fight, we’d be treated as men when we returned. My men are fighting and dying as well as any white man, I assure you. We’ll see what happens when this whole thing is over and we’re back home. Maybe Dr DuBois will be right.

I’d be remiss if I didn’t mention your regimental band. They’ve made quite a splash here among the French, haven’t they? 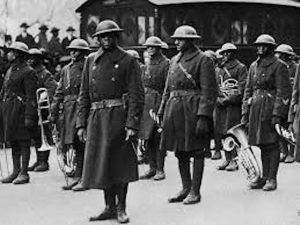 The French may build a monument to Jim Europe and his musicians by the time this war is over. Harlem’s been a center of ragtime music for some years, which has been evolving into what’s called jazz, so our band had the pick of some of the best musicians in America. The French are wild over their music. Of course, Capt Europe is as much a showman as he is a soldier and he composed a jaunty jazz version of La Marseillaise, the French national anthem, which he manages to play every chance he gets.

I watched the band at an impromptu concert in a town square a few months ago. It took a few bars for the French to recognize their beloved Marseillaise, but once they did you’d have thought they’d had an electric shock. Word has gotten around—every place the band stops, the people scream for La Marseillaise. Then Jim or his bandmaster, Sergeant Nobel Sissle, manage to get in a few of their own arrangements, too. They’ve become missionaries of a sort. I’d wager that quite a few of the men in the band will find their way back here once the shooting stops. There will be good livings here for jazz musicians. For now, they pull duty in the trenches like any other soldier in the regiment. 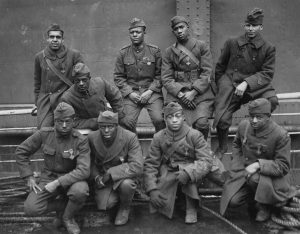 Among the least regarded voices form the First World War, 350,000 African American soldiers and nurses would serve in the US Army during the First World War, with more than 200,000 crossing to France. Ironically, because the great majority of black troops were relegated to stoop labor, stevedore, butchering, and pioneer units, African American units were some of the first to France, needed to build the ports, base camps, rail lines, and supply depots for the American Expeditionary Force (AEF).

A few units, like Chester Dawkins’s 369th Infantry, were sent to fight with the French to appease the demands of Secretary of War Newton Baker, an Ohio politician who had convinced a segregationist President Wilson that it was necessary to ensure the support of the African American population at home. The black doughboys faced entrenched prejudice and daily indignities with the AEF, but nevertheless served with great distinction. The 369th would be under fire for 191 days, the longest of any Americans, and would be the first American unit to reach the Rhine.

The men of the 369th would be awarded more than 150 Croix de guerre—the highest military decoration of the French Republic. Capt James Europe would be killed by one of his own musicians not long after the end of the War; Noble Sissle would become one of the most accomplished jazz composers in America, dying in 1975 at the age of 86. He was one of the last voices from the First World War of the 369th Infantry Band.