The Tyranny of Minority Rule 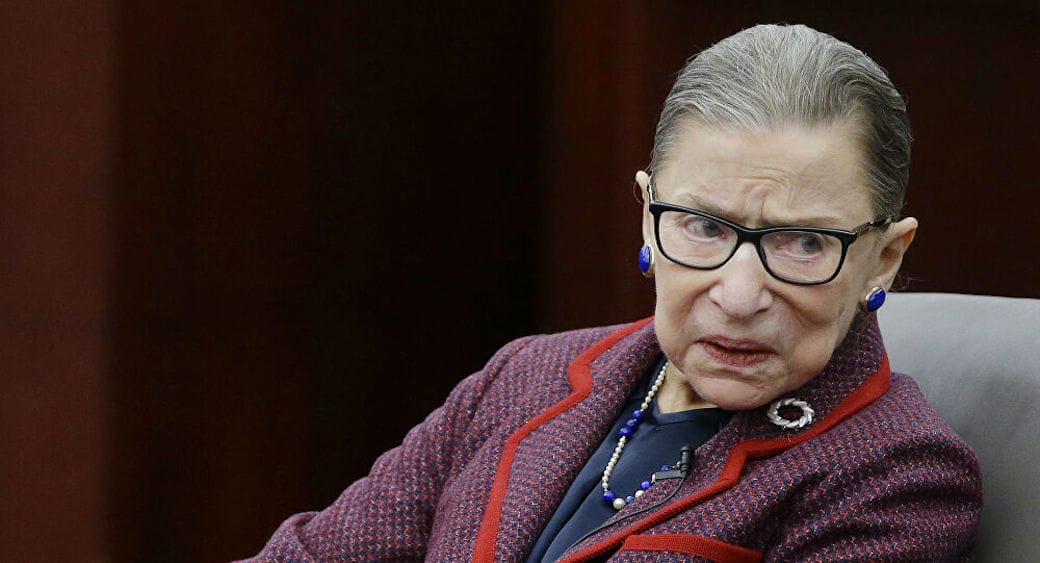 Breathable air has temporarily returned to Northern California. Last evening I was sitting on the back terrace reading a novel and feeling rather fine. A scream from my wife, KayKay, abruptly interrupted my idyll. I dashed inside, thinking she’d stabbed herself or been hit by a Very Small Asteroid. She looked up and said, “Ruth Bader Ginsburg died!” One of the last bulwarks against minority rule is gone.

I have not felt fine since.

KayKay and our children started texting immediately about our sad loss of RBG. I replied with this text, addressed to my 17-month-old granddaughter:

Once upon a time, Goldie, there was a brave warrior named RBG who fought evil ogres and slayed hideous dragons so you could grow up to be absolutely anything you want and make all your own decisions about your body. 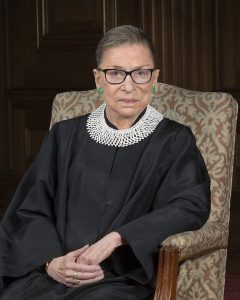 There was more fiery allegiance to the American Experiment, more loyalty to the first principles of our Constitution, and more intense dedication to equal justice under law packed into RBG’s 5’ 1” and 85-lbs-wringing-wet frame than any 25 federal judges you can name. Justice Ginsburg will forever be an American icon. She was a peerless example of what women can achieve on an equal footing with men. She was fierce.

It turns out RBG died just a few hours before Rosh Hashanah. According to NPR’s Nina Totenberg, “Those who die just before the Jewish new year are the ones God has held back until the last moment because they were needed most and were the most righteous.”

There are more things in heaven and Earth, Horatio, than are dreamt of in your philosophy… 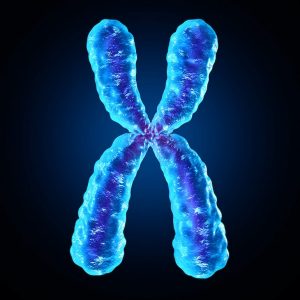 I’ve written before about the impact that strong women have had on me. This began with my independent-minded and vociferously opinionated grandmother and great aunts. It’s hard to believe KayKay is unrelated to these remarkable women, since she’s aging gracefully into their shoes. My daughter, Peanut, is a skilled professional and an astonishingly fine mother. Her daughter, our sweet little Goldie, already has an independent streak from that X-linked trait expressed across our generations.

My mother was cut from the same cloth. She steadfastly continued the long tradition in her family of elected office and public service. At age 92 and nearly blind, she’s still at it from her quarantined nursing home room. She’s tasked my brother a half-dozen times to call the County Clerk—who during the 40s and 50s was her uncle. She wants to ensure she’s registered for an absentee ballot, “So I can vote against that damn Trump.” (Apropos of everything, she’s a lifelong Republican from a long line of Republicans stretching back to Lincoln… also from Illinois.) 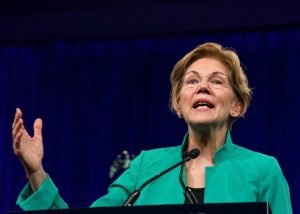 There’s therefore a reason why five years ago I resolved that in any primary, if there’s a woman on the ballot, I’m voting for her. (However, I will not allow gender to make me vote Republican. The only one I’ve ever voted for was my mother and only after rather unfilial hesitation.) In the Democratic primary this year, it was an embarrassment of riches—almost too many overqualified women to choose from. More of that, please.

It’s probably best to stay off social media until RBG is laid to rest. Then just as quickly ignored my own advice. The ugly predictable flood of tribalism and partisanship is already drowning moving tributes to this remarkable woman. No avoiding it in 2020.

I’ve another level of sad anxiety (re)triggered by the death of Justice Ginsburg. The ugliest Supreme Court confirmation battle in American history is upon us at the worst possible time. 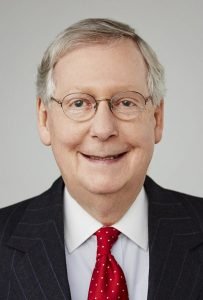 I’ll leave aside the breathtaking hypocrisy of Senate Majority Leader Mitch McConnell, who set a speed record for 180-degree turns. Recall he blocked Obama’s nomination to the Supremes because, at 11 months, it was just “too close to an election.” Mitch has already announced he’ll push through Trump’s nomination to replace RBG as quickly as possible.

This simple mathematical fact triggers my anxiety. If every Republican in the Senate votes for him/her and no Democrats do, senators representing 47% of Americans will confirm the replacement for RBG.

The deck is even more stacked when it comes to impeachments. It takes two-thirds of the Senate to convict anyone impeached by the House—President, federal judges, anyone. This means 34 senators can acquit any impeached person. You can assemble 34 senators from a group that represents just 7% of the population. That’s hyper-minority rule.

The House is less skewed, but the Constitution guarantees at least one representative per state. So an average California representative has 705,000 constituents; the single Congresswoman from Wyoming represents 568,000. 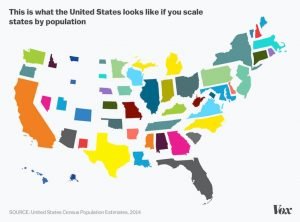 Since electors are apportioned by the size of each state’s total congressional delegation, the Electoral College also heavily advantages smaller states. Of the twenty smallest states by population, only four are reliably Blue, with another three being various shades of Purple. The Electoral College amplifies minority rule every four years.

Baked In from the Start

This counter-majoritarianism was baked into the US Constitution from the get-go. State population mostly determined original positions on the Connecticut Compromise. Large states opposed and small states favored two senators for each state regardless of population. The hard-won compromise that resulted in two senators per state was therefore all about getting to yes in 1788. This horse trading saddled us with systemic elements of minority rule.

The Northern states grew more rapidly in population. As the frontier expanded, Congress admitted new free states. As this growth progressed, the advantage of the two-senator/state compromise fell increasingly to the less-populous Slave States. The Senate—and by extension the Supreme Court justices they advised and consented—became bastions of the Slave Power. And this advantageous position in the Supreme Court and the Senate was used to great effect in protecting their Peculiar Institution. 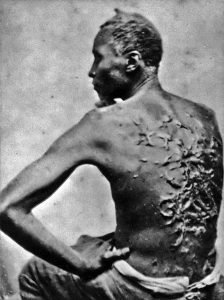 With increasing polarization and entrenchment between pro-slavery forces and the growing abolitionist movement, something had to give. The election of Abraham Lincoln gave the last shove to the Slave States. We all know what followed.

Here We Are Again

Does this all sound creepily familiar?

I’ve been saying tor years that the slavery issue of our time is abortion rights. There’s nothing that more perfectly crystallizes our New Tribalism than that single issue. It’s the ultimate mirror-image Red and Blue litmus test. It surely explains why Evangelical Christians are willing to support a most unChristian-behaving president. The catchphrase has become, “It’s all about the judges.” Which brings us back to the loss of Ruth Bader Ginsburg and the firestorm rising over her replacement.

The minority rule structure of our Constitution is manifest in the undemocratic and truly stupid institution of the Electoral College. A lot of responsible statisticians have looked at this. Most reckon the Small/Red State advantage in the Electoral College gives Republicans a 4% head start in each presidential election. Nate Silver estimates Joe Biden is the overwhelming favorite to take the popular vote. Silver also estimates he’ll have to win by a 5% margin for a 90% chance of capturing the Electoral College. A Democrat needs a landslide. A Republican needs to come close enough in popular vote, even if they lose it. This has happened twice in the 21st century, after never having occurred during the entire 20th century. This is what minority rule looks like.

A few years ago, The Economist, a British bastion of moderation, ran a cover story on America’s minority rule and the structural elements of the Constitution at its root. They also pointed out we’re the only democracy wherein the party that wins the vote doesn’t necessarily run the government. With increasing self-sorting of Americans into younger/growing Blue States and aging/shrinking Red States, minority rule is going to worsen.

This is exactly what happened during the period 1830—1860. However, there are now 280 million privately owned weapons in America.

The Recent Experience of Others 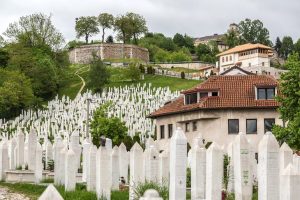 I did peacekeeping in Bosnia back in the mid-1990s. In that benighted country, a prosperous and educated population spiraled into genocide and a bitter civil war in just a few months. Let me assure you the veil of civility is tissue-thin and could be torn asunder again here, too.

So farewell, Ruth Bader Ginsburg. I mourn your loss to our nation. And I’m pleased that you don’t have to live through what may be coming in your beloved Republic.