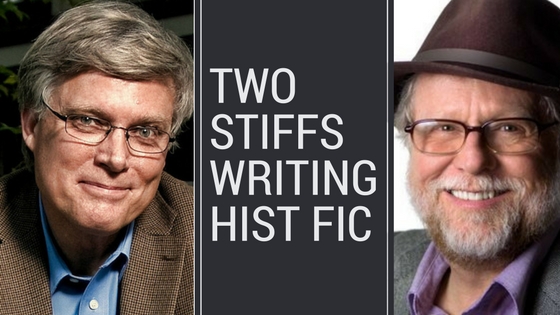 Jeff: Well, here we are again, wheezing on about being historical novelists while mud wrestling with our various doses of Impostor Complex. Let me start by saying congrats on Book 2 of your medieval fun-and-frolics trilogy coming out! Let’s get the advertisement out of the way up front. You want to give us the vital statistics on Book 2?

Wayne: A thousand blessings upon you. Acre’s Orphans picks up the day after Acre’s Bastard ends. The good news is, he’s back in Acre. The bad news is Acre is about to fall to the Saracens anyway. Lucca, being Lucca, uncovers a conspiracy to prevent what remains of the kingdom from uniting, and has to flee to Tyre to get help. He also meets a young Lebanese Druze girl, Nahida, and together they have to go through the war-torn countryside to get help and reunite her with her family. If those things are even possible.

Jeff: So we’re back in the Kingdom of Jerusalem with more horrors and hijinks for your lovable—if somewhat complicated—young scamp, Lucca le Pou. You know I’m a big fan of Lucca, entirely because he’s not your Hardy Boys or Nancy Drew kinda kid character. Disregarding my painful alliteration in the previous sentence, talk a little about where in the frightening recesses of your brain Lucca emerged from? 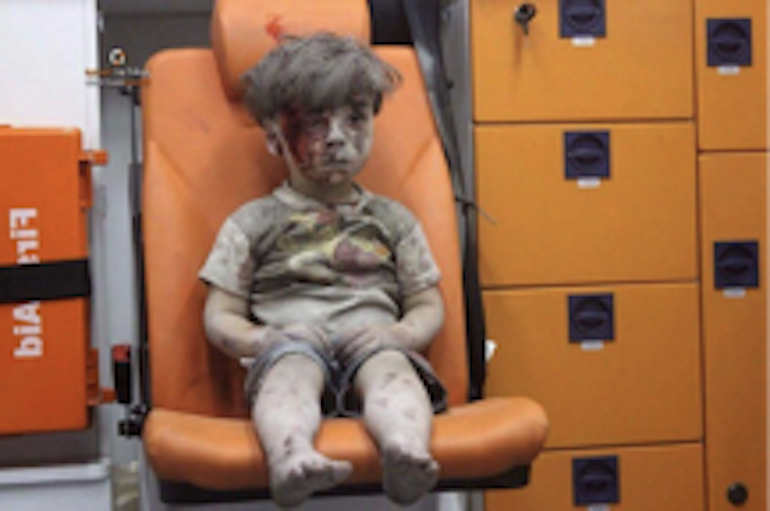 Wayne: I’ll spare you the long version (those of you so inclined can read it here.)  Basically, I had always been intrigued by the Crusades, especially the way the Crusaders couldn’t play nicely with each other. At first, I contemplated the usual thing… a young knight, famous people…. but it wasn’t coming together. Then I saw that infamous picture of Omran Daqsheesh, the dust-covered young boy from Syria in the ambulance… and thought how children have always suffered. What would a kid have gone through in that time period? Of course, I couldn’t just do an endless stream of frolics and hijinks… it’s a real war. I also didn’t want it to be an endless litany of horrors either. Acre’s Bastard is far grittier in this regard than the new book. But there’s plenty of pain and suffering to go around.

Jeff: I’ve never written a child main character, but I have written an important child character into each of my first two books. I’ll confess that I found them tricky little buggers to pull off convincingly. Since you’re building a whole trilogy around a kid, what were the pitfalls (or pratfalls) you managed to either avoid or face-plant into?

Wayne: Okay, so to look behind the writer’s curtain a bit. The thing about Lucca is that he’s ten years old, much like Mowgli or Kim, (if I may be so bold as to put him in that iconic company) and he doesn’t have a lot of context for things that are happening. I (kind of) solved that by writing in the first person, but you can tell this is Lucca looking back on what happened from some time in the future, and what he thought back then. This allowed me to have thoughts that might be more advanced than a ten-year-old would have at the time, especially around religion and national identity. He’s uneducated but smart, and that helps. I have the same rule for Lucca I had for my daughter when she got old enough to be a smart-aleck: if you’re going to mouth off to an adult, pick your shots. If it’s funny, they’ll let you skate. If it’s just sassy or rude, it’s your ass.”

Jeff: One of the things I like most about Lucca is that, although he’s an irresistible scamp with an irreverent mouth and incorrigible behavior, you never lose his sense of still being a kid who craves security and belonging. How do you keep that vulnerable aspect of Lucca going throughout a highly adventurous narrative?

Wayne: You’re very kind. I don’t know about you, but when I write something happening to a character, I have to go back and ask, “Would this character actually do that?” In this case, I would have Lucca do something heroic (or stupid) then have to go back and determine if he did it out of bravery, or luck, or stubbornness. If I thought he was being too much of a superhero, I’d go back to his bag of neuroses: need to be loved, uncertainty about his place in the world, fear of losing his self-made family. Sometimes I had to retrofit dialogue or his logic so it was more realistic.

Jeff: Like me, you seem to enjoy breaking characters. Hard. You really piled on Lucca in Book 1—admit it. As a guy who wrote characters with “shell shock”—First World War-speak for PTSD—I was very taken with how you replayed the horrid events that Lucca experienced in Book 1 over and over in his head. Did the kid ever get a good night’s sleep in Book 2, what with all the horrible nightmares? Tell me what you were after there. Or am I totally off?

Wayne: Amazingly, once Lucca got through the first three chapters it was fairly smooth sailing but it was going to have an impact. We know so much more now about PTSD and the long-term effects of trauma than we used to. There’s no way this hasn’t always been part of the human experience. While Lucca survived the events of the first book, I couldn’t have him just shrug them off. If you were sexually assaulted, kidnapped, and witnessed the worst slaughter in history, all within two weeks, it would leave a mark. I chose to give Lucca a long-term effect (recurring nightmares) that still allowed him to function. Not for nothing, but he does eventually get to sleep through the night. Eventually.

Jeff: In the first book, Acre’s Bastard, you have Lucca living for a while inside a leper hospital. I found that to be a very intriguing choice—but it works. As does his finding a mother and a father substitute there. How did you come to that decision? Did it present any problems along the way?

Wayne: Honestly? When I learned about the Order of St Lazar, which was made up of knights and church folk who’d contracted leprosy, it was just too cool not to use. Come on, Leper Soldiers!!! I invented Brother Marco, and from there it was logical that if Lucca was exiled from the orphanage, sought by spies and soldiers, and believed he’d committed murder, hiding among the most despised people in town was both the lowest depths he could sink to as well as the perfect hiding spot. I actually laughed out loud when the idea came to me.

Jeff: I don’t think this is much of a spoiler, so here goes. You give Lucca a quasi-love interest in Acre’s Orphans. I have to say, I’m having serious writer envy over how well you create that deliciously awkward, slap-and-tickle, “Do I want to wrestle you or kiss you?” feeling that kids (particularly boys) of Lucca’s age undergo when they start awakening to The Opposite Sex. Give me something here—how did you do that?

Wayne: At ten, Lucca is just at the end of the “girls have cooties” phase. You also have to remember that he was raised in an all-male orphanage with no exposure to females other than what he saw on the street. When he meets Nahida, he recognizes a kindred spirit who also may as well have come from Mars. Nahida is a couple of years older than he, and so tends to take the lead more than Lucca would like. Since the dawn of time, women with leadership skills are thought of as bossy. I wanted Lucca to learn some lessons about women in this book.

Jeff: OK, big non-writing question. You’ve abandoned my beloved Windy City of Chicago (not that I’m ever going back there to live), folded your tent, and moved to Las Vegas. The most important question of this blog. Which do you prefer—Young Elvis or Vegas Elvis?

Wayne: No doubt I will miss Chicago—when it’s not January. As much as I love the kitschy side of Sin City, if you’re talking just musically, Young Elvis is the man. I see Vegas Elvis and can’t help making the leap to him keeling over on the pot. What about you, big guy?

Jeff: Young Elvis, all the way, baby! I even had a jigsaw puzzle of the winning Young Elvis postage stamp back when the Post Office had the Elvis stamp contest. When I finished the puzzle, I got some of that goopy stuff you pour over a puzzle to basically turn it into a poster, then hung it in my law office. Although my boss made me hang it behind the door so he didn’t have to look at it when he walked by. Than’ ya, than’ ya vurry much. 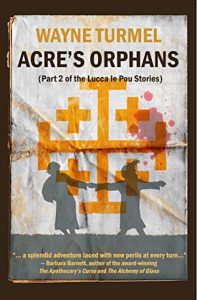 You can pre-order Wayne’s new book, Acre’s Orphans, the second in his Lucca Le Pou crusades trilogy, here https://www.amazon.com/gp/product/B07MDYDR44/ or at all the usual suspects. Publication date is January 28.