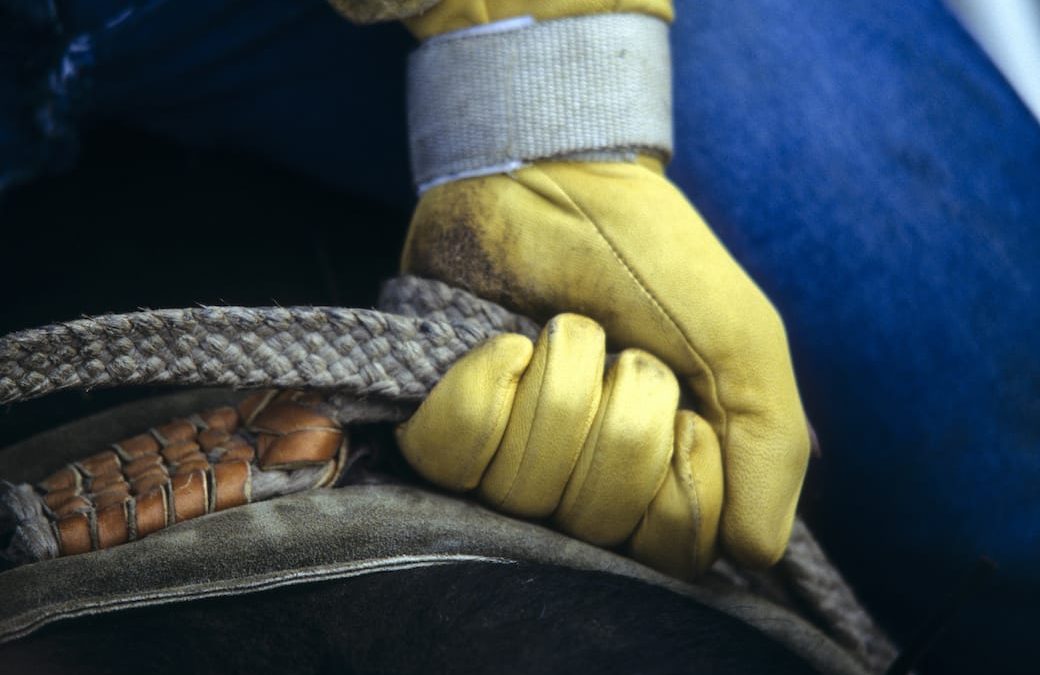 I love rodeo. Really. This might seem strange for a guy who grew up in town and has mostly remained a town rat since heading off to college. How I came to rodeo fandom requires some explanation.

Never Could Hold a Job 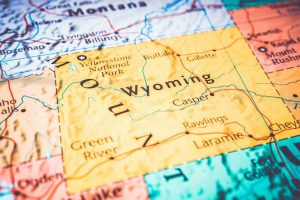 When we settled into the house in Virginia where I’m currently writing this blog, it was our 19th move. Over what was then 34 years of marriage, that meant we’d moved once every 1.79 years. We’ve since bumped that up to every 2.05 years. Cheyenne, Wyoming, is one of the Very Many Stops we’ve made along our long and winding road. And it was a glorious three years.

My 20 years in the US Air Force were a major contributing factor to our wanderings. That’s what took us to Cheyenne. You see, deep beneath the steppes of Wyoming lie buried many nuclear-tipped intercontinental ballistic missiles. All these crowd pleasers are the responsibility of the 90th Missile Wing, to which I was assigned as a lawyer 1991-1994. 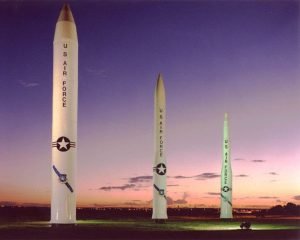 I was not an enthusiastic volunteer for this gig in a Big Square State. It was my first assignment out of law school, the Air Force thinking for unknown reasons it would be a fine idea to reinvent me from bomber navigator to attorney. But the Judge Advocate General had other ideas. In hindsight, he was right.

A Slice Out of Time

I had to pass a bar exam and then go to Air Force Lawyer School after law school. Kay-Kay and our kids headed to Cheyenne ahead of me. In September, I made the drive to Cheyenne from Montgomery, a trip about which I remember nothing. Kay-Kay had the house set up, having turned semi-professional with house relocations by then. The kids were in school, which was five doors up the street. It was a Leave It to Beaver neighborhood where we never locked cars and seldom locked front doors. Lots of kids and tumbleweed always underfoot. 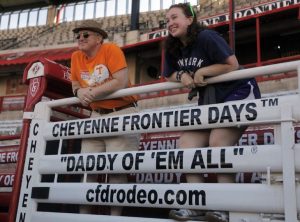 Frontier Days is in reality a confection of Western life, with a rodeo cherry on top. It runs for 10 days that always encompasses the last full week of July. There are carriage parades, free pancake breakfasts, country & western concerts, even a cowboy art show.

How It All Began 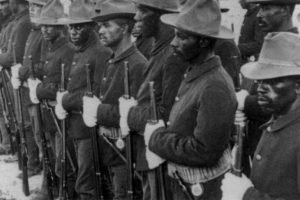 The whole thing began in 1896 and has from the first been entangled with the military post adjoining Cheyenne. Back then, it was called Fort D.A. Russell, a cavalry and infantry post established in 1867 to protect transcontinental railway workers. (The Union Pacific still runs through the base.) The fort was a garrison for three regiments of the storied African-American “Buffalo Soldiers” for the next 40 years, including the first decades of Frontier Days.

When I arrived in 1991, things hadn’t changed much and the air base still provided substantial support, lots of volunteers, and enthusiastic attendees for Frontier Days. This included Air Force paramedics and ambulances scraping Many Broken Cowboys off the dirt of the large rodeo arena. 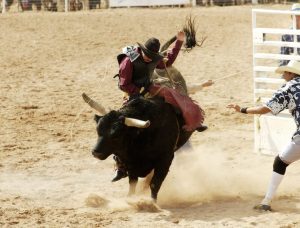 Since the planning of Frontier Days is a year-round process, I was assigned as legal advisor to the “Military Affairs Committee,” traditionally chaired by a senior colonel from the base. I quickly discovered the purpose of this committee was to say yes to any request for assistance from the Frontier Days staff. And they made a lot of requests.

I had some concerns with this arrangement, since providing, for example, on-duty military paramedics and ambulances to scrape up cowboys was technically prohibited by many federal laws and regulations. But this had been going on since 1897 and it was impressed upon me that my only recourse was to write endless “memoranda for the record” stating my legal concerns and filing them away in a very thick “Frontier Days” folder, never to be read again. I was then to keep my mouth shut and enjoy the rodeo. 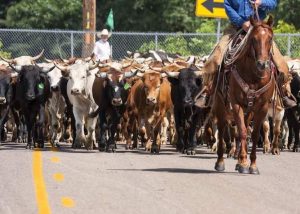 Yeah, there was a very close relationship between the military and the cowboys. On the Sunday before the first of nine days of rodeo, things kick off with a cattle drive moving the roping stock—calves and steers—from a large ranch north of town to the pens next to the rodeo arena. This cattle drive proceeds down Interstate 25, which is closed for the occasion. A group of Very Important Personages leads the cattle drive down the highway on matching color-coordinated palominos. I kid you not.

A short digression, because it was hilarious in a sangfroid-ish way. One of the VIPs leading the cattle drive is always the air base wing commander. My last year in Cheyenne, our one-star general commander was… difficult. He was self-important and imperious and loved killing the bearers of bad news. I spent much time standing at parade rest before this commander’s desk being screamed at while holding the latest crime report in my sweaty hand. 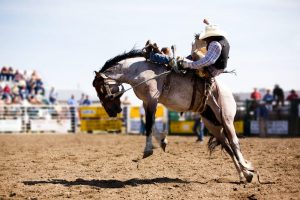 It was raining the morning of the cattle drive, highly unusual for Wyoming in July, as they lined up the palominos and VIPs, my general among them.

Now, anyone with much experience riding quarter horses knows you always check your saddle cinch before mounting. A lot of horses are rather cheeky and will inflate themselves a little while being saddled so the cinch will loosen when they deflate. General Difficulty, however, was not an experienced horseman. He was also too arrogant to accept any assistance with his mount.

Yeah, you can see what’s coming. Off step the riders, starting the Great Cattle Drive. It’s wet and the General D’s horse deflates. The General, already white knuckling it on horseback, hangs on for dear life as his saddle—with him in it—slowly rotates to the underside of his horse.

It was hilarious. The General was not amused.

Sitting in the Sun Seats 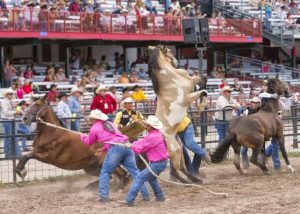 In the nine days of rodeo each year, I usually caught three or four. I owned a summer straw cowboy hat, an essential when sitting in the sun seats. This is just where you wanted to be, since they were right over the chutes where the bulls and the cowboys emerged.

Frontier Days cowboys ride around 100 bulls each day, which was the event people most came to see. Admittedly, it’s wildly exciting to watch, in a twisted masochistic way. They ride a slightly less but still substantial number of broncos, too, with saddles and without. Cowboys have to stay on the bull or horse for eight seconds in order to get a ride that’s scored. I’ve never seen eight seconds last so long.

For me, the best parts were the calf and steer roping and bulldogging (steer wrestling) events. And Cheyenne has a secret source for these. 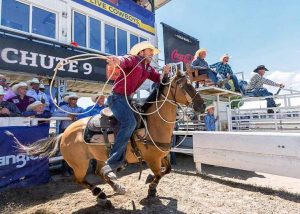 Most rodeos release the stock and the mounted cowboy almost simultaneously from chutes right next to each other. The speed of the events with this set up is impressive, to be sure. At the Frontier Days arena, all the roping and bulldogging comes out of Chute 9. These are chutes at the far end of the oval arena looking lengthwise. And the calves and steers get a 20-yard head start before the gate even opens for the cowboy and his horse. This means all these “timed events” are done at a full-out run.

Visualize a large mounted cowboy chasing full tilt after a hard-running 300-pound steer, jumping off his horse whilst grabbing the steer by the horns, digging in his boot heels, and wrestling said steer to the ground.

And you thought hockey was exciting. It probably can go without saying this was a lucrative source of broken cowboys for our Air Force paramedics to scrape up. 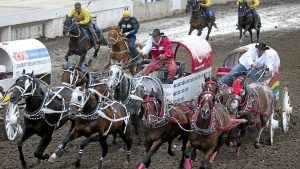 There was always a lot of money changing hands in the stands—equal parts openly and illegally—with betting on anything and everything. The chuck wagons even had big corporate sponsors with their logos on the canvas covers.

So yes, I love rodeo. The problem is that I started as a rodeo fan at the finest and largest outdoor rodeo in the world. It’s only downhill from there. It’s definitely time to head back to Frontier Days.

Any good rodeo stories of your own? Share them in comments so we can all enjoy them.