The Wages of Violence 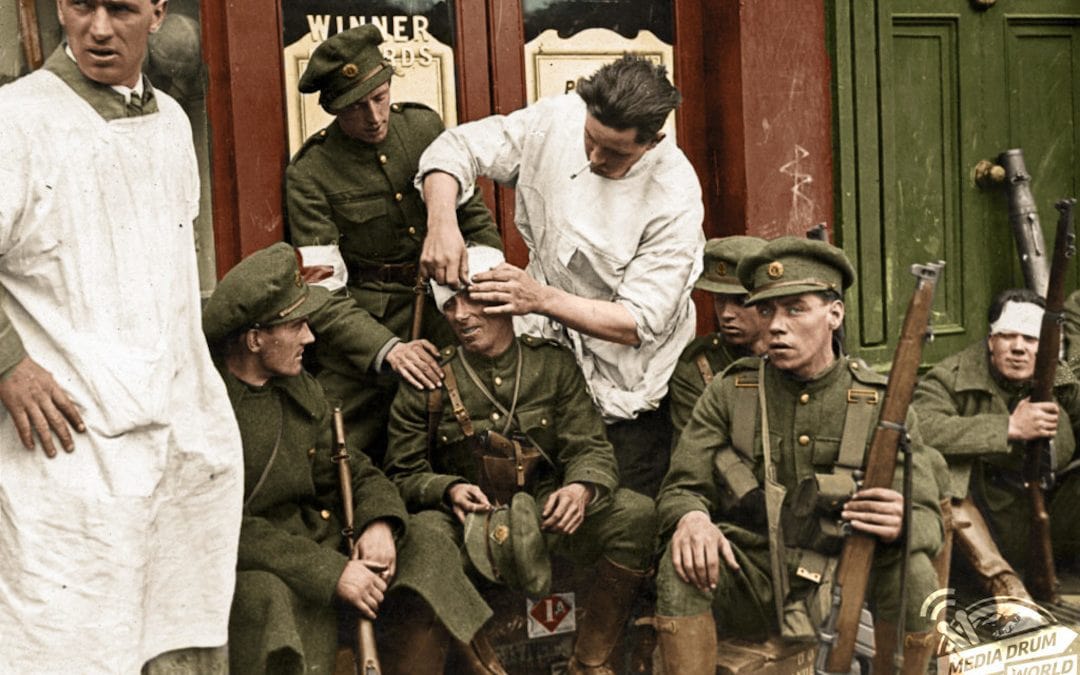 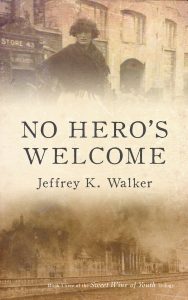 The third volume in my First World War and 1920s historical fiction trilogy, No Hero’s Welcome, comes out in a few weeks. This book, set almost entirely in Ireland from the Easter Rising in 1916 through the end of the Civil War in 1923, completes the story of characters introduced in my first two novels, None of Us the Same and Truly Are the Free. The final volume uses the final push for Irish independence to examine the political upheavals sparked by the First World War—in this case resulting in England (and the UK) losing its oldest colony.

I wrote of the doomed heroism of the 1916 Easter Rising and the spiraling violence of the War of Independence in other recent blog posts. Each sadly tragic in its own way, but to me the horrific atrocities of the Irish Civil War were the crushingly saddest end imaginable to seven centuries of struggle against subjugation by the Irish people. It is within the violence and treachery of these three events—the 1916 Easter Rising, the 1919-1921 War of Independence, and the 1922-1923 Civil War—that I set the final volume of my Sweet Wine of Youth trilogy.

The armed struggle against the British ended in July 1921. The Republican political party, Sinn Fein, had won a landslide victory in Ireland—with the exception of the majority-Protestant Ulster constituencies—in the December 1918 general election that followed on the heels of the November Armistice. The Sinn Fein members of Parliament declined to take their seats in Westminster and convened the first Dáil Éireann in January 1919. The Dáil immediately declared an Irish Republic—the second, after the short-lived Republic declared during the Easter Rising. Uneasy with the increasingly violent tactics adopted by Crown forces to counter the guerrilla campaign of the Republican rebels and concerned with public opinion turning against them (particularly in America), the British Government sought a ceasefire and negotiated settlement. The Irish, straining under the escalating violence and the heavy toll levied on the civilian population, consented. 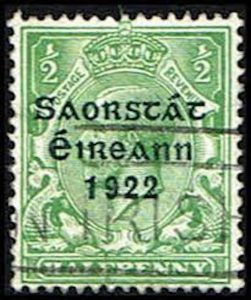 A treaty that demanded significant compromise from both sides was hammered out in London during the autumn of 1921 and was presented to Parliament and the Dáil for ratification. The Anglo-Irish Treaty granted Ireland dominion status equivalent to Canada and Australia but dissolved the Republic and required members of the new Irish Free State government and military to swear allegiance to the British monarch. The Treaty also separated the six counties of Northern Ireland from the Free State. For many Republican leaders and rebel volunteers, these provisions proved too bitter a pill to swallow, including the President of the Republic, Eamon de Valera.

For those who accepted the compromise, the Treaty was seen, as Michael Collins famously stated, as an opportunity to achieve a Republic in the future and they set about creating a Free State government, police force, and military. Collins, charged with creating the new Free State Army, filled the ranks with pro-Treaty former rebel volunteers. In April 1922, a garrison of 200 anti-Treaty IRA volunteers under the command of the redoubtable Rory O’Connor (who shared a name with a storied medieval High King of Ireland) occupied the Four Courts in Dublin, the legal heart of Ireland. In June, the first elections to the Free State parliament were held, with a majority of seats won by the now pro-Treaty Sinn Fein. 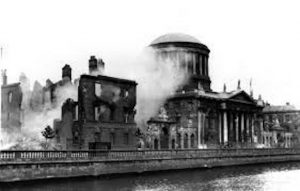 With the British Government threatening to use the remaining British Army forces in Ireland to retake the Four Courts if the Free State Government did not, Michael Collins gave the IRA garrison a deadline to evacuate and, when O’Connor refused, Collins shelled the Four Courts in late June with field artillery borrowed from the British. Subsequently during July and August, the Free State forces took all major cities and towns held by anti-Treaty forces who withdrew to the countryside and launched a guerrilla campaign using tactics developed against the British during the War of Independence. One of the casualties of this initially very effective campaign was Michael Collins himself, killed in an ambush in a remote area of his native Cork. 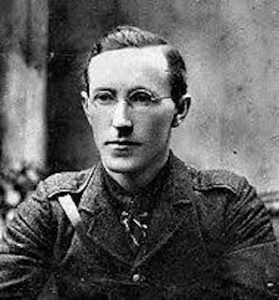 It may be that the bitterness of the Civil War sprang from the mutual sense of betrayal nursed by both sides. Perhaps the atrocious descent into assassinations, reprisals, and counter-reprisals was a result of the anti-Treaty forces’ desperation coupled with the Free State’s perceived need to prove they had control in order to keep the British from re-occupying Ireland. Or the fratricidal violence may have been a natural result of hard men who had grown inured to inhumanity through years of struggle against colonial occupation and oppression. Regardless, the shocking series of assassinations, bombings, and summary executions couldn’t be sustained for long and, with the loss of their military leader Liam Lynch in 1923, the anti-Treaty forces dumped their arms and gave up the struggle in May 1923. 12,000 anti-Treaty volunteers would remain interned until the summer of 1924.

With so many deaths resulting from extra-judicial killings and the victims’ bodies secretly disposed, the exact number of casualties incurred by both sides has never been definitively determined. Considering the devout Catholicism of the majority of combatants, that they were willing to deny proper burial to so many of their former comrades is poignant testimony to the bitterness of the struggle. However, historians estimate total violent deaths during the Civil War amount to between 1,500 and 2,000. Considering Ireland had a population of less than three million and that the Civil War lasted less than 11 months from the shelling of the Four Courts until the order by IRA leadership to dump weapons, the level of violence and death was quite astounding. 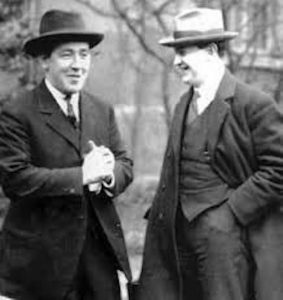 Although there are tales of brothers divided by secession in the American Civil War, many of these are likely apocryphal and the true number rather modest. This was not the case in the Irish Civil War. When the battle lines were drawn over the Treaty, men and women who had shared danger, lived rough for months on end, and imperiled their friends and families throughout the successful fight against the British, turned on each other with shocking intensity. For example, Michael Collins and one of his dearest friends, Harry Boland, found themselves on opposite sides of the fighting. Neither would survive the internecine struggle. (This ill-starred friendship was at the center of the storyline in the excellent 1996 movie, Michael Collins, starring Liam Neeson as Collins and Aidan Quinn as Boland.)

As a historical novelist, I was very drawn to the tragedy of this struggle. A main character of No Hero’s Welcome finds himself drawn into the fight as a young teenager during the Easter Rising, coming to manhood during the War of Independence where he is forced to grow up too fast. He also experiences the bitterness of the Civil War on a very personal level. Writing this character and the trajectory of his story from idealistic boy to hardened Volunteer was equally difficult and entrancing for me. I hope my own conflicted emotions, reflecting that of so many directly involved in these events, shows through in the story of Sean Brannigan and his family.

By 1927, the former anti-Treaty men and women entered into non-violent political opposition and stood for election as the newly formed Fianna Fail party. The pro-Treaty party ran as Fine Gael, creating the two major parties who would, one or the other, rule Ireland for the remainder of the 20th century. 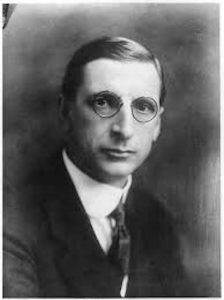 As Collins had foreseen, the Free State would prove short-lived. After a referendum in 1937 ratified a new constitution, the Free State was dissolved and the Republic declared for the third and last time on 29 December 1937 by a Fianna Fail-controlled Government led by Eamon de Valera.

The bitter legacy and lingering aggrieved emotions made the Civil War a taboo topic of discussion in Ireland and was only glancingly mentioned in school history texts. This has begun to change over the last decade, likely due to two unavoidable events—the deaths of the last of those involved with the Civil War and the upcoming commemoration of the centenary of the the Civil War. It’s long past time these horrible events are fairly examined, now with the luxury of historical detachment.

Of course, the Treaty’s partition of Ireland into the 26 counties of the Republic and the six counties of Northern Ireland remains, having given rise to another bitter cycle of bombings and assassinations during The Troubles which lasted from 1969 until the Good Friday Agreement of 1998. In an ironic modern-day twist, the current Conservative Government of the United Kingdom holds power with a razor-thin parliamentary majority that depends upon the votes of the ten House of Commons members from the Democratic Unionist Party of Northern Ireland.

It’s with some regret that I’m leaving the remarkable and tragic, entrancing and horrifying epoch of the First World War and its immediate aftermath in the 1920s. The characters I’ve created in my trilogy of novels have become like old acquaintances, although I may know them better than most of my old friends. But they’ve come to a natural end of their stories and it’s time for me to move on. (Although several had children, so…)

[You can find my novels on Amazon, Barnes & Noble, Apple Books, Kobo, and most other major vendors. The first book, None of Us the Same, is now available in audiobook on Audible and iTunes.]