The Struggle for Irish Independence 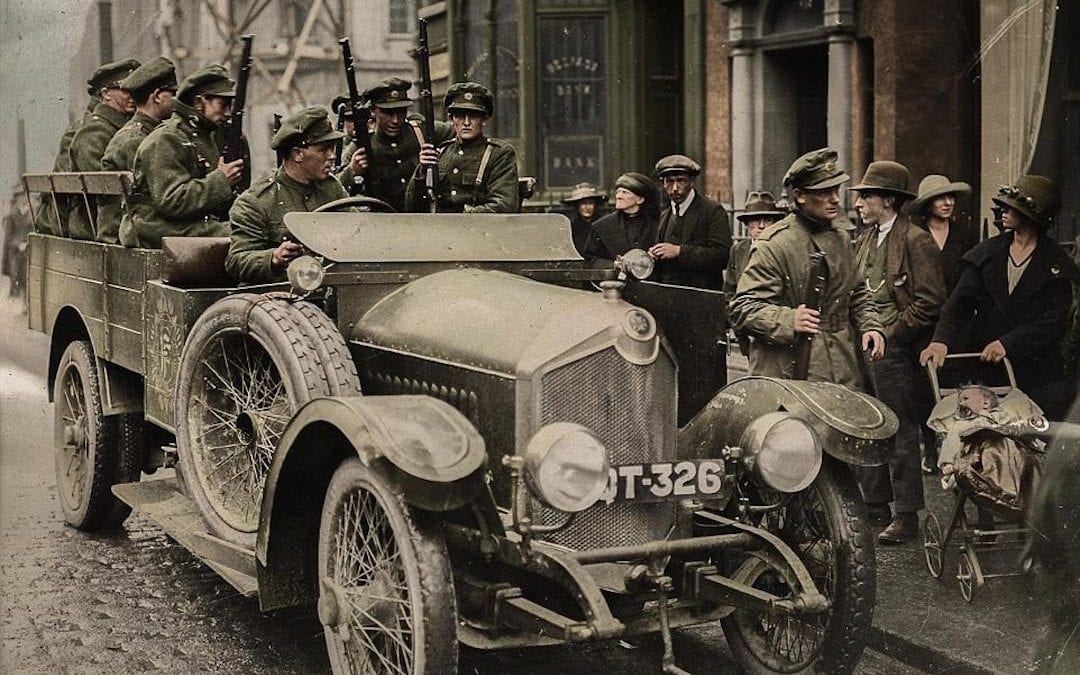 One of the guilty pleasures for any historical novelist is having a grown-up reason to wallow around in research about wherever and whenever you choose. In my case, the self-indulgence may rise to the level of mortal sin. Having long been a semi-professional Irishman, it’s little wonder I chose to set my third novel, No Hero’s Welcome, in and around Dublin at the time of the Easter Rising in 1916 through the War of Independence and the Civil War, ending in 1923.

Although some may dispute my word choice, Ireland was England’s first colony. For more than 700 years—long before an Englishman claimed any real estate in the Western Hemisphere — the Anglo-Normans, after trouncing the hapless Saxons, hopped over the Irish Sea to extend their dominion over the equally hapless Celts.

Initially, it was an odd kind of colonization. The Irish being Irish, they co-opted their Norman conquerors by marrying them to fine Irish lasses. The hand that rocks the cradle and all that. This first wave of colonization and intermarriage resulted in the foundation of some famous Irish families. The Butlers, the Burkes, the Fitzgeralds, the Fitzgibbons, the Fitzwilliams— well, any Irish surname beginning with Fitz, since that’s just an old Norman form of the French word fils or “son of.”

And it was an unsteady seven centuries to be sure. The Irish have long held it an article of faith that to refuse English domination, they needed a rising every generation. And for 700 years, they came darn close to doing that. When you overlay the traditional Irish obstreperousness with bitter religious oppression after Henry VIII found it matrimonially expedient to go all Protestant, the relationship between the English and the stubbornly Catholic Irish deteriorated even further.

Many English nobles held feudal lands in Ireland, which sets the island apart from the later colonies. (By way of example, only one English nobleman, Lord Fairfax, settled permanently in the American colonies. His lands were surveyed, in part, by the young George Washington.) To cement Ireland’s unique status, the British government abolished the Irish parliament in Dublin and brought the country under direct rule from London in 1800. (The lovely 18th century neoclassical Irish parliament building still stands near Trinity College in Dublin, where until the 1970s it served as the headquarters of the Bank of Ireland.) 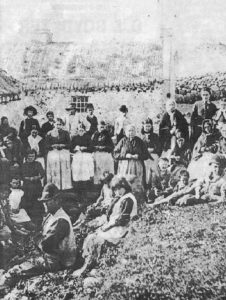 Although united under one Crown and one Parliament, this union didn’t serve Ireland well by mid-century when the potato crop began to fail. The English-dominated government of the United Kingdom treated Ireland with inexcusable negligence and begrudging aid. The scale of suffering was staggering—1/3 of the population died, 1/3 emigrated, and 1/3 remained. The impact on Irish demographics was so severe that the population of the island would not again reach its 1840 level of 6 million until the 1990s.

With Catholic emancipation and the emergence of an educated Irish middle-class, the resistance to British rule widened and deepened. Moral and financial assistance came from the vast Irish diaspora in the United States and the drive for independence (or at least home rule) increased sharply in the period after the American Civil War.

At the same time, the Irish rediscovered an enthusiasm for all things Gaelic—language, literature, music, sports. The importance of the Renaissance of the Irish language shouldn’t be underestimated. As the old Irish saying has it, tir gan teanga, tir gan anam—a people without a language is a people without a soul. It was out of the Gaelic League that several leaders of the 20th century republican independence movement emerged, such as Patrick Pearse and Eamon de Valera.

With the start of the First World War in 1914, many Irish Republicans saw an exploitable opportunity while British attention was firmly elsewhere. Although doomed to failure, the Easter Rising of 1916 would topple the first domino in the cascade of events that would lead to independence. The president of the self-declared Irish Republic, Patrick Pearse, had long preached for a blood sacrifice to reinvigorate the Irish spirit of independence. He would die before a firing squad the first day of executions that followed on the heels of the failed Easter Rising. 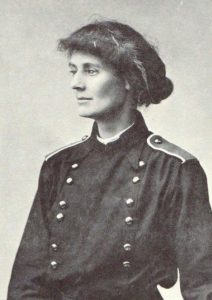 When peace descended in November 1918, the United Kingdom immediately plunged itself into a general election to replace a House of Commons that had not faced the electorate since 1910. The result of the December election in Ireland was a sweep of nearly all the Irish Parliamentary seats by the political party closely associated with the Republican movement, Sinn Fein. Of the 73 Sinn Fein members of Parliament elected in 1918, more than half stood for election from their jail cells. All refused to take their seats in the House of Commons at Westminster, including the first woman ever elected to the Commons, Constance Markievicz.  Instead, the Sinn Fein members who were at liberty met in Dublin as the first Dáil Éireann. The date of this first meeting, the 21st of January 1919, marked the official beginning of the Irish War of Independence.

With so much of the leadership of the now-renamed Irish Republican Army either executed by British firing squads or sitting in prison after the failed 1916 Rising, the Republicans regrouped over the next two years. When fighting ended overseas, activity aimed at undermining British rule intensified. Much of this effort was under the leadership of Michael Collins. Although only a junior officer in the Irish volunteers in 1916, Collins emerged as an important leader after his release from prison in the general amnesty of 1917.

Perhaps because he was raised the youngest of eight children, Collins was nothing if not a pragmatic expert in the art of the possible. Knowing full well the IRA could never defeat the strength of the British Army in open battle, Collins set about assembling a clandestine force of volunteers in Dublin and throughout the southern and western counties of Ireland. Today, his approach would be called “asymmetric warfare.” 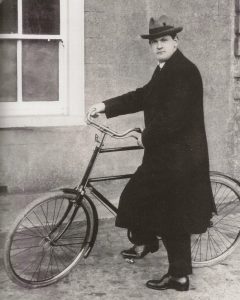 Collins himself hid in plain sight, bustling about the streets of Dublin dressed in the ordinary suit of the middling office worker he had once been. The British government, headquartered in Dublin Castle, found it an endlessly frustrating process trying to track the elusive Collins, who never spent two nights in the same bed. Combining a system of embedded intelligence agents and a select band of dedicated gunmen, Collins terrorized the government, military, and police in Dublin and beyond. I tell some of this story through my account of one such young IRA gunman, the fictional Sean Brannigan, in my third novel, No Hero’s Welcome, which will be out in September. Collins himself makes a few cameo appearances.

The War of Independence raged across much of Ireland for the next 2½ years in a tragic and seemingly endless series of ambushes and attacks, reprisals and counter-reprisals, assassinations and executions until the British Government, drained by the bloody excesses of the First World War and smarting from world public opinion supporting the Irish, finally agreed to negotiate some form of independence for their long-held colony. 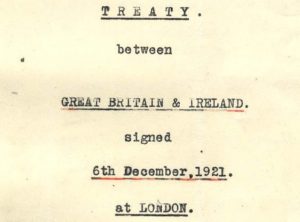 The resulting Treaty established an independent dominion, similar to Canada or Australia, within the British Empire and with the king as a sovereign. This Irish Free State would encompass only the 26 majority-Catholic counties of the South, leaving the six majority-Protestant counties within Ulster firmly inside the United Kingdom.

The Treaty not only split the geography of Ireland, it divided the men and women of the Republican movement as well. Those who favored the Treaty and the Free State would form the government of the new Irish nation, while those who opposed the Treaty and held out for a unified Republic of the entire island would take up arms again, this time against their former comrades. I tell some of that sad story in No Hero’s Welcome as well.

Michael Collins supported the Treaty—he was one of the negotiators who signed the document—and became both Minister of Finance and a leader of the Free State’s defense forces. He was profoundly conflicted by the necessity of using violence against his former comrades, but he saw the Treaty and the Free State as a means eventually to achieve an independent and unified Irish Republic. He would not live to see that promise fulfilled, killed in an ambush by anti-Treaty forces on a lonely road in his home county of Cork. He was just 31 years old.

[Look for my new book, No Hero’s Welcome, in September. In the meantime, you can enjoy the first two books of my Sweet Wine of Youth historical fiction trilogy here and here.]