The Strange Life of Thomas Paine 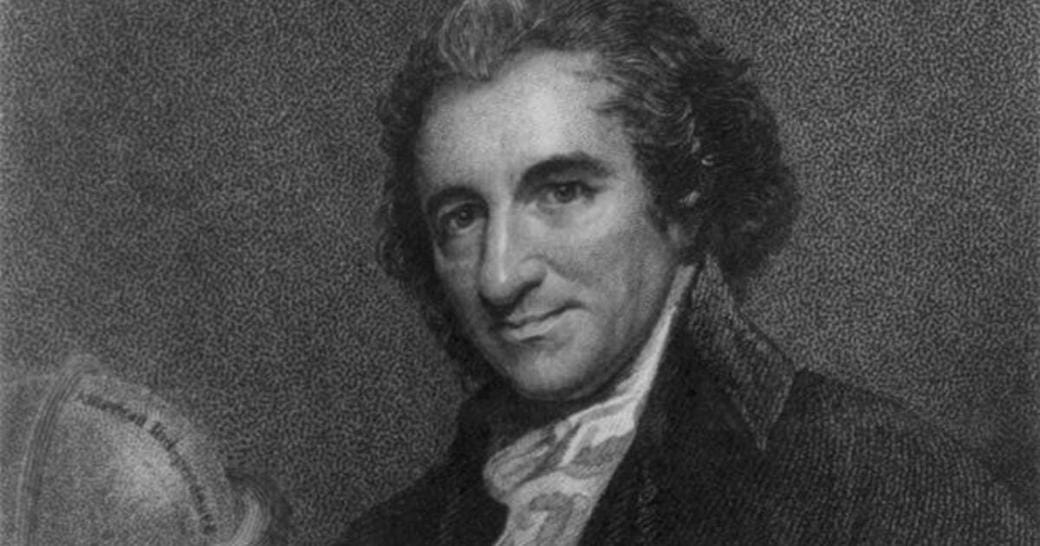 To my pleasant surprise, one of my favorite historical figures has received unexpected shout-outs during The Current Unpleasantness in Washington. I count it a minor victory for American democracy when any session of Congress ends with quoting… Thomas Paine. 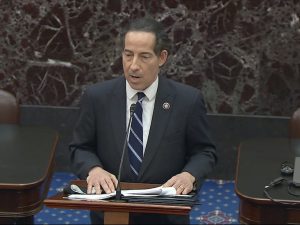 We’ve received an exquisite tutorial in rhetoric this last week from Maryland Congressman Jamie Raskin, the undisputed First Among Equals of the fine team of House impeachment managers. He ended his closing argument to the Senator-jurors with the most famous quote from the endlessly quotable works of Paine:

THESE are the times that try men’s souls. The summer soldier and the sunshine patriot will, in this crisis, shrink from the service of their country; but he that stands by it now, deserves the love and thanks of man and woman. Tyranny, like hell, is not easily conquered; yet we have this consolation with us, that the harder the conflict, the more glorious the triumph.

[Note: This is Paine’s text—Raskin tinkered a bit with the pronouns and wording.] 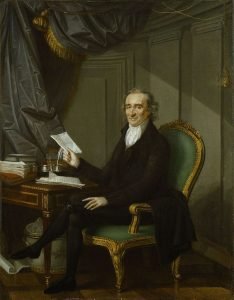 Back in the Dark Ages when we were taught something called “Civics” in high school, this was one of the canonical quotes for memorization, along with the Preamble of the Constitution, the opening lines of the Declaration of Independence, and the Gettysburg Address.

Alas, having been penned by Many Dead White Guys, such memorization has fallen into disfavor, to our collective detriment. As recent years have shown, we’ve lost even our shared democratic vocabulary. But that’s a problem for another blog.

How to Be a Real Paine

These famous lines are the first sentences of a series of thirteen pamphlets written by Thomas Paine between December 1776 and April 1783. By “pamphlets” I don’t mean glossy trifolds stuck in the battery drawer until there’s enough to bother throwing away. 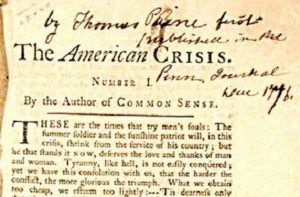 To the contrary, in the freewheelin’ and disease-wracked 18th century, pamphlets were social media. Printers made many shillings selling pamphlets. They printed several pages per side on larger sheets of paper and folded them into unbound booklets. No muss, no fuss, quick to churn out. Besides sexual scandal—see, e.g., Hamilton—the most popular pamphlets involved current events.

And from 1776 to 1783 in America, there was nothing was more current than the fight for independence. Thomas Paine’s pamphlets are known as The American Crisis—or sometimes Common Sense, a pseudonym with which Paine signed them.

The young Thomas Paine–originally “Pain,” but he added the -e after a childhood of Very Bad Nicknaming–seems an unlikely choice for radical heart of the American cause. An Englishman born in Norfolk, Paine received a decent-for-the-time grammar school education. He then apprenticed to his father to learn staymaking. Yes, the Voice of the American Revolution began his adulthood making women’s lingerie. 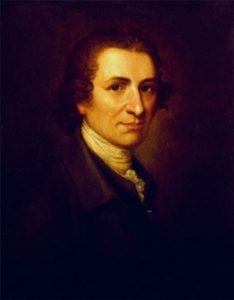 Young Tom was either a terrible staymaker or terribly bored with staymaking. At nineteen, he went to sea as a privateer, which but for a royal warrant during wartime, was basically pirating. After a couple of years at sea, he came back to England. Setting up as a staymaker again, got married, and promptly lost his wife in childbirth. As you did in the 18th century.

He then careened through a series of gigs at which he was uniformly awful—tax collector, schoolteacher, tobacconist. He was then fortuitously introduced in London to Benjamin Franklin. Possessing a discerning eye for promising young men (and available young women), Franklin gave Paine a letter of introduction and said, “Get thee West, young man.” Or words to that effect.

The rest is U.S. History.

Thomas Paine’s life took a propitious turn when he landed in Philadelphia in late 1774, sick as a dog, and was carried off the ship. Pulled back from the brink by Franklin’s physician, he became editor of Pennsylvania Magazine. After the opening battles of the Revolution in 1775, Paine emerged as a radical voice for independence, well ahead of majority opinion in the Colonies. He would soon change that. 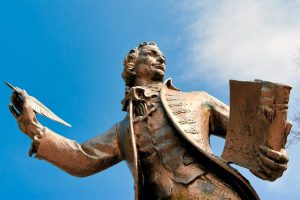 The first installment of The American Crisis sold 100,000 copies in three months within a population of two million. That’s like Star Wars: The Force Awakens popular. At the order of George Washington, Paine’s first pamphlet was read to the Continental Army. Paine became a top-shelf Founding Father through the no-nonsense eloquence of his style and the wild popularity of each successive pamphlet.

On behalf of the Continental Congress, Paine traveled to Paris and the Netherlands on successful fundraising missions, finally landing back in London in 1787. From there, he watched the democratic revolution he’d sparked in America spread to Europe.

In response to the 1789 revolution in France, Englishman Edmund Burke penned his conservative anti-revolutionary masterpiece, Reflections on the Revolution in France. After 30,000 copies sold, Paine decided Burke had to be answered. The result was the publication in 1791 of Rights of Man. Thomas Paine began with the same Lockean principle of inalienable rights adopted by Jefferson in the Declaration and ended with a denunciation of monarchy and aristocracy. He followed up in early 1792 with an even more radical second part of Rights of Man, in which he espoused progressive taxation, free healthcare, old-age pensions, and universal public education.

No surprise, the Crown was not amused and charged Paine with seditious libel, a capital offense. Equally unsurprising, Paine fled to France in fear for his life. 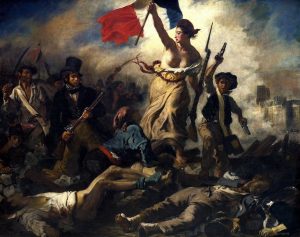 The French not only welcomed him with open revolutionary arms, but made him a French citizen and elected him to the National Assembly. His inability to speak French did not, it seems, stand in the way. It being the French Revolution, he soon fell out with the Party in Power du jour and by 1793 was imprisoned. After dodging a date with Madame Guillotine, Paine was released through efforts of the American ambassador in Paris, James Monroe.

Now You’ve Got God Against You 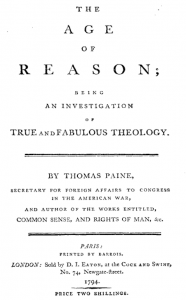 In 1794 and 1795, Thomas Paine released the first two parts of his last great work, Age of Reason. (The third and final part was published in 1807.) This comprised a detailed argument against the literal truth of the Bible and a full-throated indictment of the corruption of organized religions. This became a bestseller in America, thereby peeving religious people of all stripes. Such is life.

Having ably demonstrated an uncanny knack for alienating pretty much everyone, Paine put the cherry on top by publishing an open Letter to George Washington in 1796. Angry that Washington hadn’t done much to get him out of a French prison, Paine accused the Father of Our Nation of treachery. This was the kind of accusation that often ended in duels. Not exactly good at making friends, our Tom. This Letter would dog Paine for the rest of his life.

At the invitation of Jefferson, Paine returned to the United States in 1803, arriving in the midst of bitter political partisanship and the Great Awakening religious revival. The Federalists loathed his friendship with Jefferson and radical ideas laid out in Rights of Man. The religious-minded despised what they considered the radical deism of Age of Reason. And no one had forgotten that Letter to George Washington either.

Let’s just say Tom was not welcome on the cocktail circuit.

Paine didn’t long survive his return to America. He passed in 1807 in a modest house in Greenwich Village where he lived with the wife and children of a friend imprisoned by Napoleon in France. He wanted to be laid to rest in the Quaker burying ground in New Rochelle, near the 300-acre Loyalist farm the State of New York had given him in 1784 for his services to the Revolution. However, the Quakers refused him burial, given his opinions in Age of Reason. He was instead buried beneath a walnut tree on his farm, having lived a truly remarkable life. 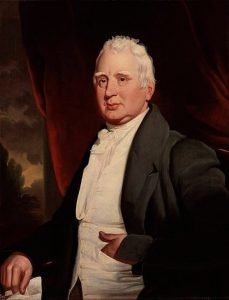 But Tom Paine being Tom Paine, he would not rest in peace. In 1819, the radical English journalist and Member of Parliament, William Cobbett, came to Paine’s farm during a trip to America and dug up his bones. Although Cobbett’s intent was to give Paine a hero’s burial in his native England, this never occurred. Paine’s bones were noted among Cobbett’s property when he died in 1835.

What became of old Tom’s remains is the stuff of folklore. Upon Cobbett’s death, Paine’s bones passed to a day laborer, then to Cobbett’s former secretary, then to a furniture dealer. From there the trail grows cold. There have been claims of a rib in France, a jawbone in England, a skull in Australia. None of these have been substantiated.

Regardless of the whereabouts of his earthly remains, I’m certain Thomas Paine would find most gratifying his resurrection 213 years after his death, once again to lend his inestimable voice to the defense of democracy in America.

But are we still able to hear him?