The Perplexing Problem of Mr. Jefferson 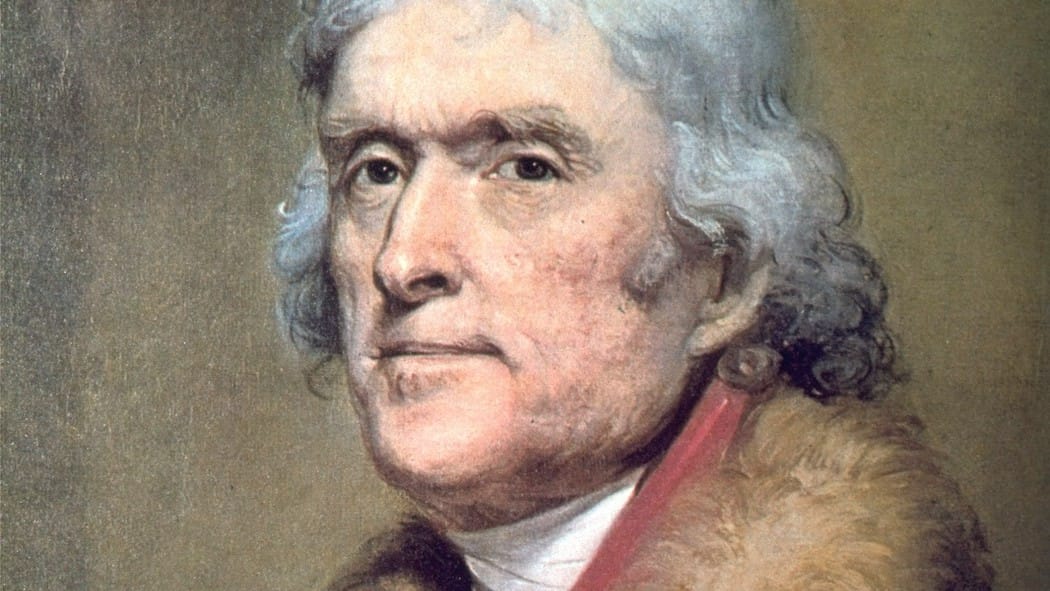 (Having celebrated his 278th birthday last month, Mr. Jefferson remains as perplexing a problem to us as ever. Maybe now all the more so, after a year of BLM protests against persistent racism in America. Thought this a good moment to revisit a blog I wrote three years ago on our enigmatic third president.) 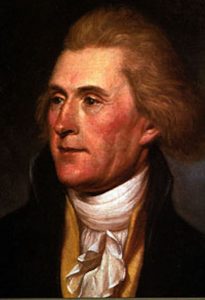 Friday was Thomas Jefferson’s 275th birthday. Those of you who do not reside in the Commonwealth of Virginia may be forgiven for not knowing this. For us Virginians, forgetting Mr. Jefferson’s birthday gets you points on your driver’s license.

The other piece of news is that I recently passed the mandatory test at the Police Department and am now a Licensed Tour Guide for Williamsburg. This is not entirely unrelated to Thomas Jefferson.


The Cult of Jefferson

The Cult of Jefferson in Virginia requires a few words for non-natives. It’s seriously all Jefferson, all the time here and not undeservedly so. I mean, he was the possessor of a Very Big Brain and Did a Lot of Stuff. In 1962, President John Kennedy threw a white-tie shindig for all the living Nobel laureates of the Western Hemisphere. He greeted his dinner guests by quipping, “I think this is the most extraordinary collection of talent, of human knowledge, that has ever been gathered together at the White House, with the possible exception of when Thomas Jefferson dined alone.”

But that doesn’t make Jefferson less of an inconvenient problem for an America shocked to attention by Black Lives Matter. 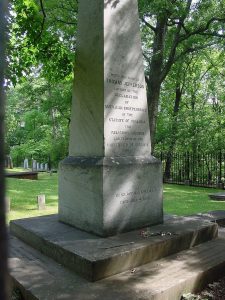 Yes, we take Jefferson seriously here in the Old Dominion. This may also be in part because he remained throughout his life first and foremost a Virginian. Since he designed absolutely everything himself, he of course designed his own tombstone. This is what it says:

of the Statute of Virginia for religious freedom

& Father of the University of Virginia 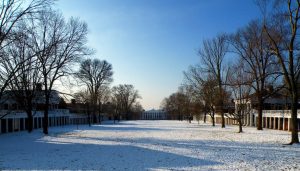 You may have noticed that there is absolutely no mention of his being the third President of the United States. It didn’t even make the list of “Top 3 Things of Which I’m Most Proud.” Two are utterly Virginian—the Statute for Religious Freedom and founding the University. And at UVA, he is always referred to as “Mr. Jefferson.” Pity about his team crashing and burning in the NCAA tournament again this year. 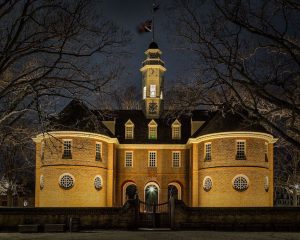 The Declaration of Independence is also a Very Virginia Document, since its contents closely track the Virginia Declaration of Rights passed by the Fifth Virginia Convention in Williamsburg during May of 1776. This was written by George Mason, a man thrust into the national consciousness in 2006 when his basketball team made it to the Final Four. The Virginia Constitution was adopted by the same Convention, providing another important source for Jefferson up in Philadelphia. And the Fifth Convention directed one of their seven representatives at the Continental Congress, Richard Henry Lee, to move for independence. The rest, as they say, is history. 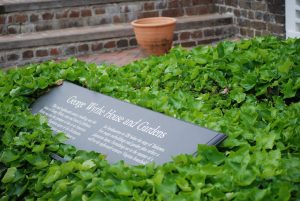 The second thing that relates Jefferson to me as a Very Part-Time Tour Guide is that he makes appearances at Colonial Williamsburg—literally and figuratively—almost at every turn. There is of course a resident Jefferson interpreter.

The real Jefferson went to college at William & Mary, the oldest buildings of which anchor the west end of Duke of Gloucester Street. This is the main drag, with the colonial Capitol sitting at the other end of its one-mile length. He lived as a student in a room in the Market Square Tavern, which is across from the old courthouse. Behind the courthouse is his cousin Peyton Randolph’s house, where he was a frequent guest. Around the corner on the Palace Green, his law professor and “second father,” George Wythe, lived in a house that’s still there and open to the public. They spent many long hours there discussing Enlightenment ideas about government and law and the rights of man.

Jefferson was also a substantial—although often land-poor—Virginia planter, like the other early Virginian presidents: Washington, Madison, Monroe, and Tyler. Along with that comes the Inconvenient Truth that the eloquent advocate of the inalienable rights of men was… an owner of other human beings. This is, of course, the most profound Jefferson Problem. 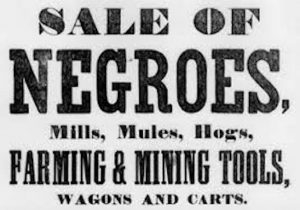 It’s almost easy to avoid this awful fact when touring people around Colonial Williamsburg. I mean, it’s a well-scrubbed and antiseptic kind of 18th-century place, even with the horse poop on the streets. There are several named historical character/interpreters representing enslaved persons, so CW is trying to confront and present America’s Peculiar Institution in an educational and appropriate manner. But no matter what you do, the glaring reality that the author of the Declaration of Independence was a slave owner is right there in your face. And like your nose, this particular Jefferson problem only takes focusing your attention on it to realize it’s been there all along. 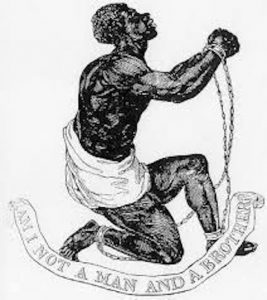 I’m not very good at telling Happy Slave Anecdotes either. Yes, there were some owners of enslaved persons who were more humane or decent in the treatment of their slaves. But they still owned human beings, held people as property, stole the labor of other persons, made the bodies of fellow humans a major component of their wealth. So no matter how decently a slave-owning family treated their cook or nursemaid, they were still enslaved—stripped of their agency, their ability to choose the path of their life, their freedom to marry whom they chose or start the family they wanted. In the end, there was nothing good that came from such a pernicious system for the victims of it.

Jefferson struggled mightily with this paradox throughout his life. He was keenly aware, like we are today, that his words “all men are created equal” silently excluded half the population of his beloved Virginia. Regardless of the state of his tortured conscience, however, he owned hundreds of enslaved persons throughout his long life and freed just two while he lived and five in his will–all men. And there was, of course, the whole Sally Hemings Thing. 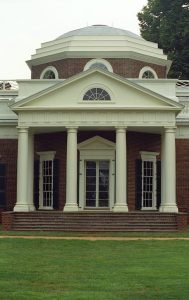 Sally had come to the Jefferson household with her mother as a child, part of the personal property of Jefferson’s new bride, Martha Wayles. Who was Sally’s half-sister, her father having impregnated her mother, Susanna. Who was herself the daughter of an enslaved woman and an English sea captain. It’s all very sordid. And keep in mind there was no possibility of meaningful consent by an enslaved woman in regard to her owner’s sexual demands. Which we would today call rape. Which it was.

Jefferson may have had a genuine affection—even love—for Sally and possibly vice versa. We have no evidence he ever emancipated her however. We know that he freed all their children—he and Sally definitely had two children and most likely six—in his will. Much is made of the fact that Sally, who had accompanied Jefferson’s daughter to Paris in 1787 where he served as U.S. ambassador, returned with him to America in 1789, even though she could have claimed her freedom and remained in France after slavery was abolished by the Revolutionary government there.

We have no way of knowing her motives since she left no writings—she was probably illiterate. However, she may have already been pregnant with Jefferson’s child at the time. My hunch is she exchanged her continuing servitude for her child’s (and later children’s) freedom. We have the circumstantial evidence of Jefferson’s will as support, but there’s no way to be certain. Sally Hemings is a most profound aspect of our problem with Jefferson. 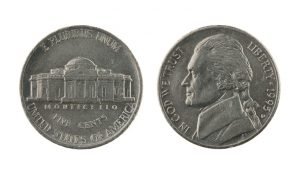 So we tour guides labor in the presence of the baby elephant of slavery, present in every element of Virginia colonial life. In 1775, the population of Williamsburg was about 2,000. A little more than half of those persons were enslaved. I hold it as something of a solemn trust to give voice and memory to these 1,000 people who lived and labored and died unfree. In my hometown.