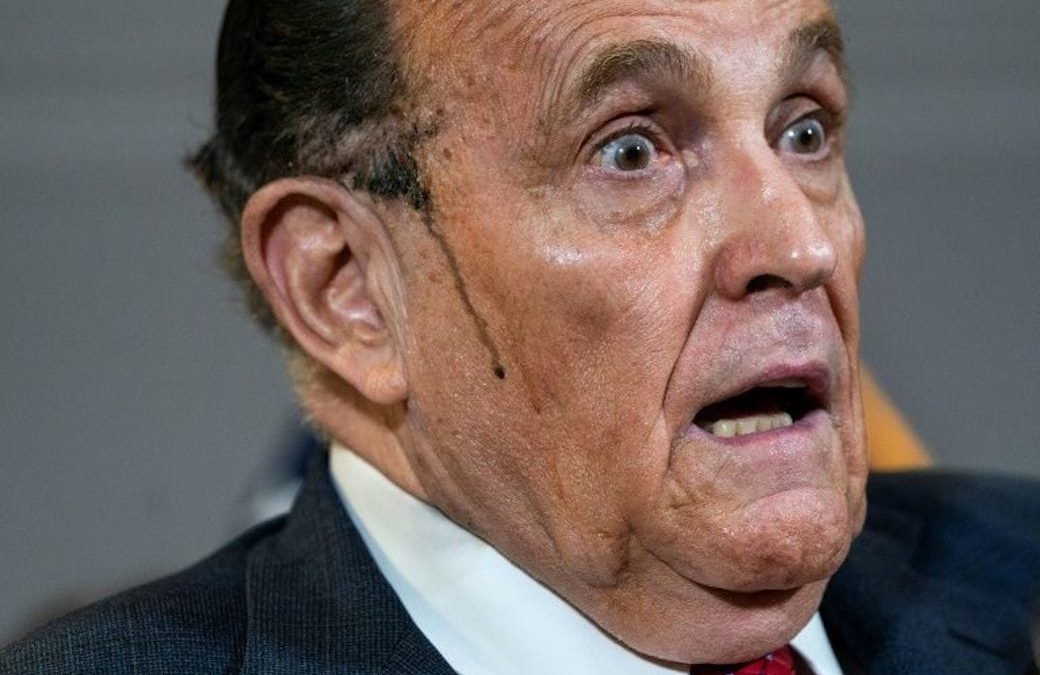 I’ve been a lawyer 29 years. I also spent some time as a law professor, teaching Criminal Law and Other Legal Stuff. I’ve even been a federal prosecutor and spent a lot of time inside courtrooms. Which is to say I was absolutely unprepared for Mr. Trump’s Wild Legal Ride Through America’s Courthouses.

As of this writing, the Crackerjack Trump Legal Team—who stick annoyingly to our brains like caramel corn to our teeth, but without even a cheap prize inside—is now 1-and-31. They’re the Baltimore Orioles of election litigation. 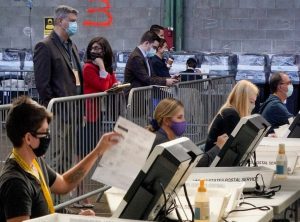 And the one win? The court said GOP election monitors could stand six feet rather than ten feet from the people counting ballots in Philadelphia.

I look forward to reading the opinions attached to this endless parade of dismissals by a gaggle of state and federal judges. It’s a remarkable writing challenge, finding new ways to say, “Ummm, say whaaat?” Judges must turn to their clerks and say, “We’re gonna need a thicker thesaurus for this one.”

− “To halt the certification at literally the eleventh hour would breed confusion and disenfranchisement that I find have no basis in fact and law.” [GA federal district court]

−  A judge allowed the Secretary of State to seek attorney’s fees in a dismissed case. State law allows for attorney’s fees only in cases brought “without substantial justification” or “solely or primarily for delay or harassment.” [AZ state court]

− “It is not in the power of this Court to violate the Constitution.” [PA federal district court]

−  “This court has been presented with strained legal arguments without merit and speculative accusations… unsupported by the evidence.” [Ditto]

− Calling an election unfair does not make it so. Charges require specific allegations and then proof. We have neither here.” [PA – 3rd Circuit Court of Appeal] 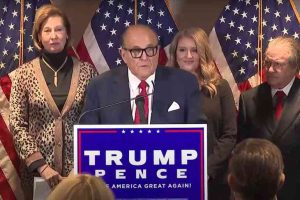 These are not words any lawyer wants to hear even once during their career, let alone in Baskin Robbins 31 Flavors of Ugly. Things are not going well for Legal Team Trump.

These Fractured Fairy Tales of litigation are nominally masterminded by Rudy Giuliani. I say nominally because I doubt Rudy has written a civil complaint in forever. We know he hadn’t been in a courtroom for three decades before his cringeworthy performance before a Pennsylvania federal judge a week ago.

About Rudy. Being a tenderhearted and sentimental Person of Irish Descent, I confess to an inkling of sympathy for poor Rudy. This jabroni was Most Popular American Not Named Tom Hanks following the September 11 attacks. Remember America’s Mayor? That was Rudy Giuliani. 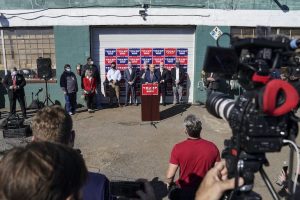 Now 19 years later, Rudy’s holding a presser at the loading dock of a Philly landscaping company, conveniently located between a crematorium and a sex toy shop. A couple of days later, he’s literally melting before the TV cameras during an unhinged, dissociative episode in a Gettysburg cheap motel conference room. The place didn’t even have complimentary breakfast, for crying out loud.

The Decline and Fall

How did this happen? In my opinion, this is now Peak Rudy. He’s always been an attention monger. After leaving in a blaze of popularity as NYC mayor, he decided to cash in, so he set up some nebulous consulting company and peddled his name recognition for some of that Long Green. 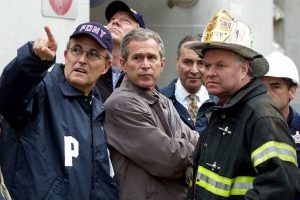 He had an ill-starred run for president in 2008, a campaign that ended for murky reasons that involved spending city money to facilitate an illicit affair with a woman who would become his third wife. With whom he was cheating on his second wife. With whom he’d cheated on his first wife. Who was his second cousin. Oh, and he’d advised President Bush to appoint his old police chief, Bernard Kerik, Secretary of Homeland Security. Who was promptly indicted on 16 counts of tax fraud and whatnot.

That kooky Rudy. Such an incorrigible rascal.

Then His Honor hitched his wagon to the Trump train, and boom—he’s back under the bright lights. And he decides to stay relevant by going along with everything that comes out of Trump’s pie hole. So now he’s a caricature of a parody of himself. History will not be kind.

The Gang That Couldn’t Sue Straight

With Rudy as titular head, the Trump Team has seen a rotating cast of supporting characters. Two erstwhile respectable law firms were part of the team for approximately 15 minutes, quickly peer-shamed into withdrawing. A string of small-timers came and went, being laughed out of court by various state and federal judges. 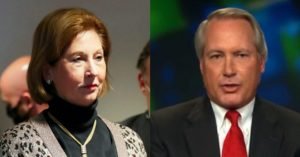 Then it got weird. Rudy brought in a couple of lawyers to be The Big Guns who would overturn Pennsylvania! Georgia!! Arizona!!! He was Releasing The Kraken!!!

This Dream Team consisted of L. Lin Wood, a B-List celebrity lawyer and QAnon disciple; Jenna Ellis, who plays a lawyer on Fox; and Sidney Powell, who represented Michael Flynn so badly he required a presidential pardon. Ms Powell is also a QAnon devotee and, based on her public statements, may well be non compos mentis. Which is lawyer for “bughouse crazy”—but in Latin, “so I can charge double.”

Far from The Kraken, Ms Powell has set the bar for bad lawyering very high. In a recent case filed in Georgia federal district court, she managed to spell “District” incorrectly. Twice. In the header. 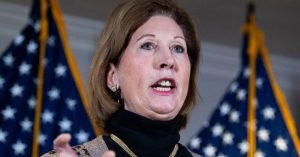 When I was teaching at St Scoobius School of Law, I’d have failed a 1L law student for that kind of sloppy drafting. Unless Congress has recently created a US DISTRICCT COURT FOR THE NORTHERN DISTROICT OF GEORGIA.

Meanwhile, up in Pennsyltucky, another Trump Legal Ninja was arguing that GOP representatives were not allowed to observe ballot counting. Except they were, which led to this rapier-sharp exchange:

Judge: “I am asking you as a member of the bar of this court, are people representing the Donald J. Trump for President [campaign] … in that room?”

Trump lawyer du jour: “There’s a nonzero number of people in the room.”

That last bit of nonsense illustrates something interesting. Rudy Giuliani and his client are trying these cases in the media. And it’s kinda-sorta OK for Rudy or Sidney or L. Lin QAnon to go in front of the microphones and spout unsubstantiated drivel. It’s another thing altogether when you’re standing in front of a judge who has contempt power and can put you in jail on the spot. 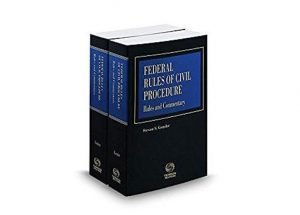 You see, judges take the notion of Proving Things With Facts kinda seriously. As do the Federal Rules of Civil Procedure and the American Bar Associations’s Model Rules of Professional Conduct.

Rule 11(b) of the Federal Rules states that when a lawyer signs a pleading, they’re representing that it’s not made to harass or cause unnecessary delay, that it’s “a nonfrivolous argument,” and that all “factual contentions have evidentiary support.”

Now re-read the above quotes from the judges. Trump’s Legal Whiz-Kids are on really thin ice with Rule 11.

This Rule also allows the court on its own initiative to sanction offending lawyers by imposing whatever penalty—including fines—the court deems appropriate. And your entire law firm gets sanctioned, not just you. That ought to make these schmucks popular around the water cooler back at Dewey, Cheatem & Howe.

But note that Rule 11 sanctions only apply to representations made to the court in writing or in person. What about all the wildly unsubstantiated and patently untrue out-of-court statements made by Giuliani & Company? That’s a little more complicated. 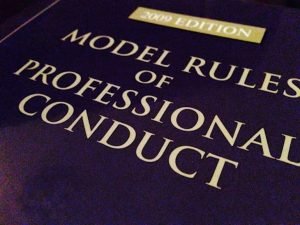 The ABA’s Model Rules—of which every state has some version—have general prohibitions on attorneys acting like knuckleheads in or out of court.  For example, Rule 8.4 lists fraud, dishonesty, deceit, and misrepresentation as unprofessional misconduct for which a lawyer can be sanctioned by his state bar.

The Model Rule that speaks directly to out-of-court statements is Rule 3.6. This rule prohibits lawyers from making statements to the media that have a “substantial likelihood of materially prejudicing an adjudicative proceeding in the matter.” The rule is so shot through with exceptions, however, that it’s become almost impossible to enforce. And there’s that free speech thing, too.

So this is the reason Trump’s Legal Beagles feels unrestrained in the media to throw the most outlandish mud against the wall to see what sticks. But Rule 11 explains why they regularly backtrack or amend or otherwise weasel their words when standing before a judge. Like “a non-zero number.”

But in the big scheme of things, whether anyone ever gets sanctioned or disbarred, these Stupid Lawyer Tricks are doing substantial damage to both the profession of law and, more importantly, to Americans’ faith in something fundamental to our democracy: free and fair elections.