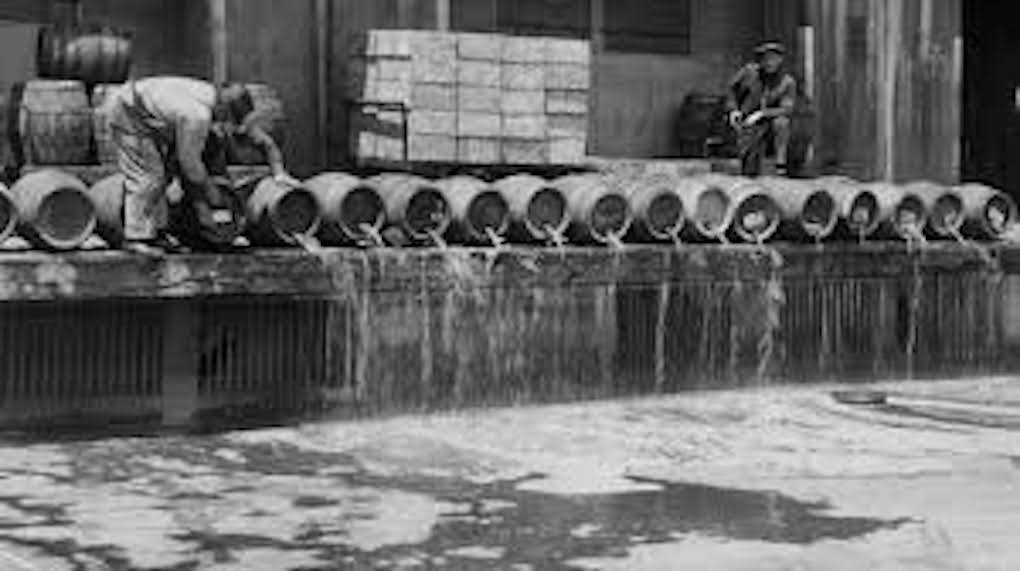 Exactly 100 years ago this last Friday, America’s Greatest Social Engineering Experiment Ever went into effect. I’m not talking about Social Security or Medicare or slicing the bread before putting it in the bag. I’m talking about Prohibition.

Let’s start with the law. Because I’m a lawyer and stuff. 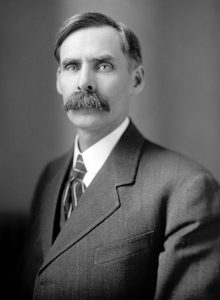 One of the earliest collateral injuries from Prohibition was Andrew J. Volstead. This poor schmuck will forever have his name attached to the law that implemented the terms of the 18th Amendment. The so-called Volstead Act criminally sanctioned the production, sale, transportation, or possession of any intoxicating beverage within the US of A.

Andrew Volstead wasn’t tailor-made for his bête noire role to Americans who could no longer nip down to the corner bar and throw back a few. Volstead was the Minnesota-born son of Norwegian immigrants—a people not averse to a snort (which kinda sounds Norwegian) on a cold Scandinavian winter evening. He went to Saint Olaf College—because of course he did—and then became a small-town lawyer in a place called Granite Falls. Jimmy Stewart surely  starred in a movie set there.

Volstead was sent to the House of Representatives by the Good People of Minnesota in 1903, where during his first decade in Congress he was mostly known for a bill exempting farmer cooperatives from the Sherman Antitrust Act. Then he became chairman of the House Judiciary Committee in 1919—just in time for the newly ratified 18th Amendment to land on his desk, aching for implementing legislation. Which is what the Judiciary Committee did back then, there not yet being sufficient numbers of K Street lobbyists to write all the legislation. Boom—the Volstead Act.

Andy V was not a particularly zealous “Dry,” as the anti-alcohol types were known, but neither was he an anti-Prohibition “Wet.” He was known as a “Half-Wet,” a clunky appellation only necessitated by the fact that the word “Meh” had not yet been invented. Also, it sounds a little naughty. 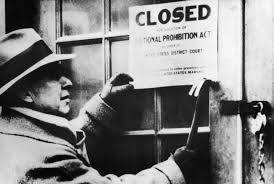 Being either a masochist or a devout Lutheran—may or may not be significant overlap there—Congressman Volstead saved all the hate mail he received as a result of his name being stapled to that Prohibition legislation. And the hate mail came in by the bushel, that being the standard unit of measure in 1920s Minnesota. Even after Volstead was given the bum’s rush by voters in the very next election, the mail just kept coming in over the transom.

I don’t know if Volstead had a transom, but I’ve always wanted a reason to say that.

These Very Many Boxes of poison-pen notes are preserved (and even indexed!) at the Minnesota Historical Society, should you need a laugh. I doubt they were as amusing to Mr Volstead at the time. Let me offer a few examples:

Will you be so kind enough to help the good people to get the return of Beer? Good Beer hurts no one But poor Beer Will.

[Author’s Note: Sick Man is from Milwaukee, where there were a lot of Germans, which may explain his Random Capitalization, if not mine. This letter is also an early plea for a vibrant craft beer industry, since he’s clearly referring to Budweiser and Pabst as “poor Beer.”]

You will go to Hell soon, you damned loafer.You prostituted the Constitution of the U.S.

You are bribed by the Coca Cola slop makers.

Wait till the next election. No more crooked work.

We want MEN in Congress. No puppets. 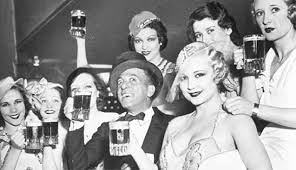 [Author’s Note: Besides the first attempt at a “Pepsi Challenge” and repeatedly alleging that Mr Volstead is either a) really lazy or, b) a type of footwear, this is a wonderful example of a proto-conspiracy theory. And it being about the company evil enough to once bring us New Coke, there’s just enough plausibility. Also note that the District of Columbia Post Office managed to find Volstead with the above address.]

Now your dirty war is finished but the money you and others got for it will do you NO GOOD. I am not a Saloon man but I like my beer and wine. I never was a Drunk in my life. I have family but you made a Bolshevik out of me. We will clean the Country of ALL TRAITORS. You shall not enjoy the bribes you took. You say the war is over? Well in war time TRAITORS are shot. 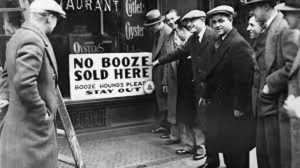 [Author’s Note: With his salutation, HWM insinuates that Congressman Volstead was old. He was 58, which in 1919 was “the new 57.” Or the writer might think the Congressman’s first name was “Ole,” an understandable error, given Volstead’s father was a distant cousin of the Queen of Norway. Nevertheless, the virulent tone, multiple uses of “traitor,” and the SHOUT CAPS prove beyond doubt that Honest Working Man was, in fact, the inventor of Twitter.]

Besides angry mail to the eponymous author, there were plenty of other downsides to the Volstead Act and America’s misguided social experiment with a 13-year collective hangover. No one except the most fervently delusional “Drys” believed for a moment that Americans were going to forego drinking.

Prohibition came on the heels of more reasonable restrictions imposed during the First World War to ensure adequate foodstuffs for the Allied forces and populations by diverting it from alcohol production. And not just in the US—most Canadian provinces as well as Newfoundland instituted prohibition measures during the War. The Brits even passed a law prohibiting “standing your round”—buying drinks for friends. In the US, restrictions imposed in 1917 sought to prohibit access to alcohol by conscript soldiers to reduce disciplinary problems. (The US military began doing this again in 1991 during Gulf War I and now issues a “General Order One” with an alcohol ban for every forward deployment of US troops.) 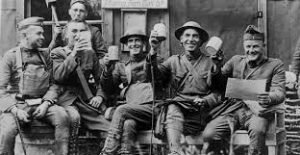 When the boys came home from France itching for a drink, the result was the Roaring Twenties with its glamorized Gangster Culture funded by the enormous profits—and minimal risks—from the illicit booze trade. Illegal brewing and distilling flourished across America to supply cheap stuff to the masses. Organized crime mobs also established highly efficient importation operations—rumrunning—to get The Good Stuff into speakeasies and wealthy homes.

Although most Canadian provinces adopted Prohibition laws, too, they allowed for the production and exportation of alcohol—generally turning a blind eye to the enormous amounts of liquor heading across the border or over the Great Lakes. In one of the Greatest Economic Windfalls of All Time, the tiny French-owned islands of St Pierre and Miquelon (current population: 6,008) just south of Newfoundland quickly became the major transshipment point for legally exported Canadian whisky headed for the USA, as well as French wine and spirits legally imported from the home country. The importation of erstwhile legal alcohol into these minuscule territories during the 1920s was roughly one oil tanker per person per year, I imagine. 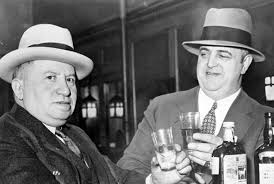 The crime gangs used the ridiculous piles of cash they were accumulating to strike out as criminal venture capitalists, establishing or expanding gambling, prostitution, drug, and other nefarious operations. This prepared the gangsters for the inevitable repeal of Prohibition, since by the late 1920s support for repeal of the Volstead Act was gaining a head of steam. As a result, we’re still living with crime organizations that can trace their roots directly to that easy money from bootlegging.

I wrote a Newfoundland-New England rumrunning operation into my first novel, None of Us the Same, as an important plot element that ends rather tragically. Ironically, my last novel in that same trilogy, No Hero’s Welcome, is set within the walls of a Dublin pub. No one, least of all the British Government that ruled Ireland, would have considered for even a moment a Prohibition law there. Throughout the 1920s, the Irish looked across the water at their cousins in America with equal measures of pity and bemusement. 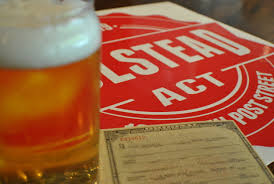 And what of Andrew J. Volstead? After being ignobly booted from Congress by the ungratefully sober voters of Minnesota, he returned to Granite Falls–also where Rocky and Bullwinkle live, I’m pretty sure–and practiced law for 25 years until his death in 1947 at the age of 86. Which was like “the new 105” back in the ’40s. He was quite bitter about his name being so closely associated with the ill-fated Prohibition experiment. He’d probably be much bitterer if he knew how many names of cool urban pubs now include the word “Volstead.”

Enough to drive a man to drink… 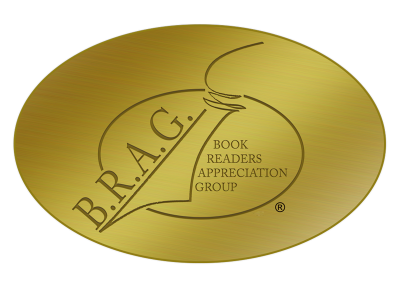 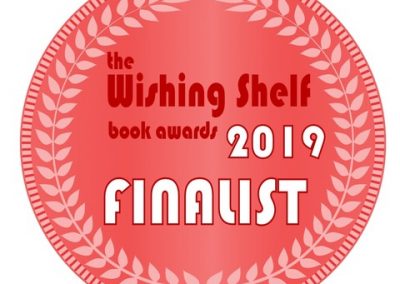 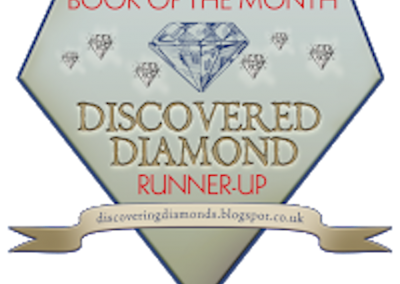 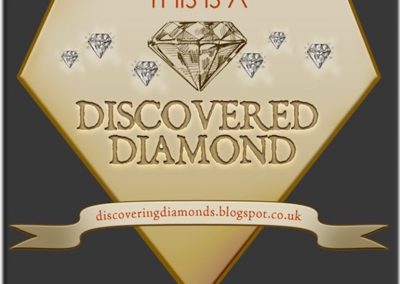