The Birth of the F-Bomb 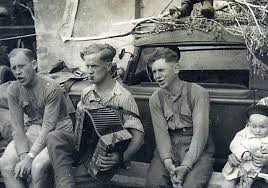 [This is the full-length version of a guest post I wrote for author Lucinda E. Clarke’s blog back in May. For space considerations, she had to cut it down. A lot of people commented, liked and reposted it, so I thought I’d post it this week. Thanks Lucinda and to your excellent blog.]

There’s an irresistible impulse amongst we humans always to overestimate the uniqueness of our own situation. In the USA, for example, we’re currently hyperventilating over the hideous partisanship and coarseness of our political discourse.

There’s really nothing worse than what the Jeffersonians and the Adams-Hamilton Federalists meted out to each other 200 years ago. Adams was labeled “a hideous hermaphroditical character” by a journalist hired by Jefferson. Adams responded by throwing said journalist in prison for sedition. The happy aftermath to this story is that the journalist, a Scotsman (not surprisingly) by the name of Callender, later turned on Jefferson and outed ‘The Author of the Declaration’ as ‘The Father of the Children of His Slave’ Sally Hemings. (Who was herself probably the half-sister of Jefferson’s deceased wife. It all got rather complicated in Ol’ Virginny.)

So I for one believe things could get much worse.

The same sense that Our Time Is Utterly Unique applies to… the F-Bomb. My kids seem to think they invented the word f@ck in all its polygrammtical guises. I beg to differ, but until recently I’d kinda thought MY generation invented every day use of the word f#ck. I was woefully mistaken.

In fact, the first usage of the word f$ck in any kind of sexual sense appears to date to the early 14th century when a man from Chester in England is referred to in a writing as “Roger Fucke-by-the-Navele.” Which says something most hilarious about poor Roger’s sexual prowess, we may safely assume. The first use of the F-word in literature dates to a poem written by a Scotsman (not surprisingly) named William Dunbar: “Yit be his feiris he wald haue fukkit / Ye brek my hairt, my bony ane.” But since less than .0008% of the world’s population could even come close to understanding this, it’s kind of a “no harm, no foul” usage.

The first book of a fiction trilogy I’m writing came out in May, set during and after the First World War. Doing research for these books, I discovered that the F-Bomb, as in the carpet-bombing usage of the word f$ck in each phrase of every conversation, was probably invented by millions of English-speaking soldiers slogging around the trenches during the First World War. (I stand ready to be disproven by all you U.S. Civil War or Napoleonic War authors out there.)

It seems to have become something of a Word of Universal Usage among the Brits, Canadians, Aussies, Kiwis, Newfoundlanders, South Africans, and—belatedly—the Yanks. Its use even spilled over to the non-English speaking troops, including the Germans. By the end of the War, it was in the same league as “O.K.” in terms of worldwide currency.

I’ve spent much of the last 18 months in a deep dive into First World War soldier’s letters, memoirs, interviews, songs, cartoons, trench newspapers, poems, and novels. Much of this was consciously cleaned up by the former Tommies or doughboys or diggers for consumption back home in decent society. I then learned to decode the accepted replacement euphemisms or entendres. Some examples, by way of illustration:

You get the idea. And it quickly became obvious to me that in the trenches, about every fifth word seems to have been f^ck, f+cked, or f!cking. Or some combination or derivation thereof.

Here’s a few examples from widely popular soldiers’ songs, which grew ever more profane as the war dragged through its deadly, sausage-grinding 52 months. As a former aviator myself, I particularly like this Royal Flying Corps ditty derived from the children’s rhyme “Cock Robin.” Just the chorus will do:

All the pilots who were there

When they heard Cock Robin

Had kicked the fucking bucket.

Here’s one that made it into my book, set to the tune of “Pop Goes the Weasel.” Just because.

We don’t give a fuck for old von Kluck,

And all his bleeding army.

What I sensed from all these letters and memoirs that referred, either directly or indirectly, to the incredibly coarse language of the trenches is that the enlisted men and the officers took the regular use of f%ck as simply part of the background noise of the soldiering way of life. Just as they stopped hearing the near-constant thrum of artillery unless it was falling directly on them, profanity just didn’t register. The hideous level of violence and the omnipresence of capricious death numbed the men to anything beyond just getting by from day to day.

My favorite use of the F-Bomb? Actually, it’s not from the Great War at all. Rather, my F-Bomber Award goes to Al Pacino who, in his eponymous lead role in the 1983 film Scarface, scored the first recorded F-Bomb hat trick by using the word as verb, adjective and object of a proposition in an economical nine words: “Don’t f#ck with me you f@cking piece of f*ck.” <Mike drop>

If you’d like some slightly cleaner words and phrases invented or repurposed by soldiers in the First World War, sign up for my e-news letter on this web page. I’ll send you “30 SAYINGS YOU NEVER KNEW ORIGINATED DURING THE FIRST WORLD WAR” as a freebie. (I don’t sell mailing lists or send spam. Just a monthly update and very occasional announcements.)