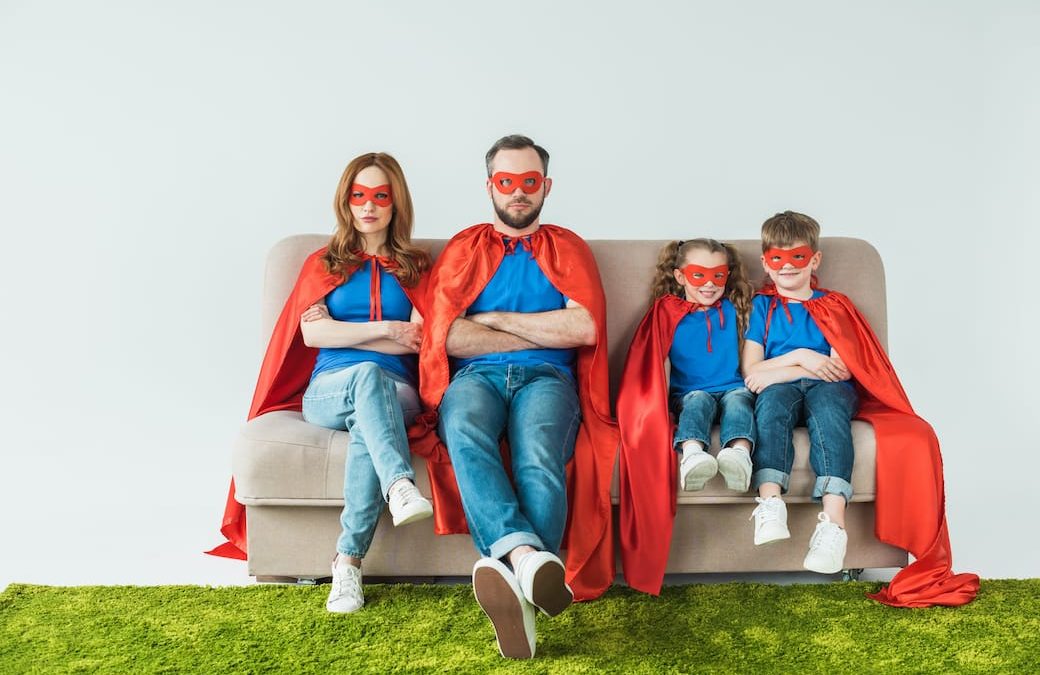 We did a lot of activities, new and old, during the Pandemic Epoch. But most weren’t play. Even stuff that might look like play wasn’t, being accomplished with the anxious fervor of the homebound and virus-obsessed. It’s time for us to remember how to play.

Children don’t need to remember to play. They just… play. The evolution of how a kid plays tracks their developmental stages. 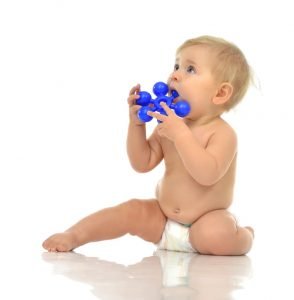 First, they just do stuff—waving arms, kicking legs, curling toes, blowing spit bubbles. This unoccupied play is pretty standard for a newborn, every bit of it adorable to parents, grandparents and random people. Sure, it’s linked to musculoskeletal development and gross motor skills, but pointing that out just detracts from all the adorableness.

Somewhere around 3 or 4 months, they can kinda sorta sit up in that wobbly bobble-head way. This is also utterly adorable and facilitates holding stuff in their cute chubby hands. Which along with putting Everything In Their Mouths is about all they want to do. At this solitary play stage, babies don’t want to share toys or interact with others. Making them the equivalent of cranky old men who won’t give up the remote.

Then It Gets Interesting 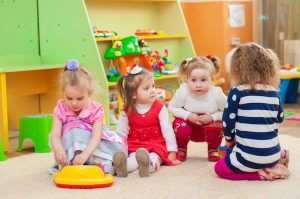 Before age two, kiddies begin to get Very Interested Indeed in what other people have. As in everything other people have, which they of course wish to put in their mouths. Meaning they’ve regressed to college fraternity bros standing around a keg with red cups. These toddlers don’t want to actually play with others much yet, but they definitely want to have what those others have. 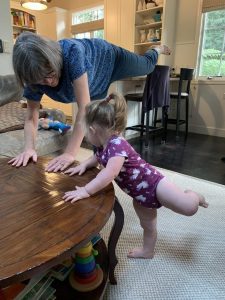 After age two, kids start to engage in what’s called parallel play. This looks to us like they’re “playing” with us because they’re sitting next to us Doing Some Stuff. But they are flying solo and not actually playing with us or other kids.

Sometime around age three, they start engaging in associate play. This is a little more sophisticated than parallel. Think of two kids at preschool in the dress-up corner together. One’s putting on the Astrid from Frozen costume and the other is donning the doctor’s lab coat, but they’re not playing “Astrid has a tummy ache and goes to the doctor.” They’re both costuming, but not integrating their cosplay. 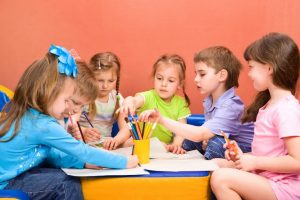 At about age four, kids hit peak playtime by moving into cooperative play. This is when the Kids in the Costume Corner dress up as Astrid and Anna, turn the pillows in the Nap Corner into Olaf, and go on an elaborate search for Kristoff.

My grandson, Goober, is six and can spin out hours-long imaginative play with my wife, usually involving dinosaurs packed away from when his uncles were boys. During COVID, this was done via FaceTime. That kid can PLAY play. As Ralph Waldo Emerson said, “It is a happy talent to know how to play.” 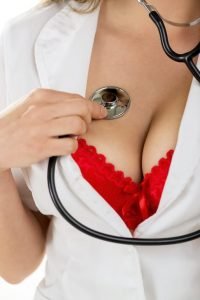 And of course, as we inevitably grow older, cooperative play turns into, oh I don’t know, Naughty Nurse and Handsy Patient. Like I said, peak playtime. And a big incentive to remember to play.

What We Adults Lose

Grownups do stuff we call play—cosplay, role play. So we go through the motions of cooperative play. What we generally lack, however, is the depth of investment that kids bring to their play. In general, short of ingestion of psychedelic mushrooms, our adult inhibitions prevent us from throwing ourselves with abandon into our play. 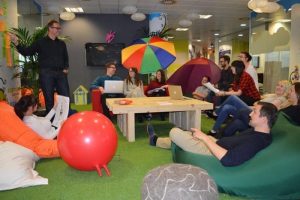 And that’s a pity. There are tangible—and marketable—benefits to be gained from adult play. Creativity guru Roger von Oech says, “Necessity may be the mother of invention, but play is certainly the father.” For proof, you don’t have to look much further than the giant indoor slides and jumbo ball pits that are standard accessories at up-and-coming Silicon Valley tech companies.

For the vast majority of mere mortals, our play muscles atrophy with age. It’s a vicious circle really—more aging leads to less play, less play leads to more aging. As is almost always the case, G.B. Shaw said it best. “We don’t stop playing because we grow old; we grow old because we stop playing.” When we don’t remember to play, we start fading to grey. Literally. 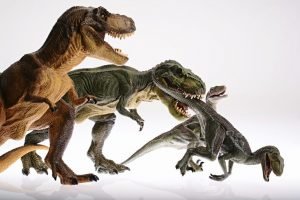 But there are a handful who’ll never lose the childlike twinkle of playfulness. I’m certain my wife, Kay-Kay, is one of these elfin spirits. She spent the first six months of COVID on those multi-day dinosaur adventures with Goober. This included, for example, a long-running “Lost in a Cave” scenario that turned a guest bedroom into a subterranean sound stage. “Lost in a Cave” was followed by festooning another bedroom with Christmas decorations in July to create a multi-week “Trip to Planet Fun” for the various ‘sauruses. 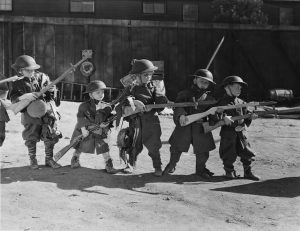 During the many months of COVID lockdown, most of us discovered an essential truth. Brian Sutton-Smith, a New Zealander recognized as the world’s leading play expert, figured this out decades ago. “The opposite of play is not work. It’s depression.” Hence there are mental health risks to not remembering to play.

Sequestered in our houses and apartments, cut off from opportunities for adult cooperative play, most of us experienced some level of depression. This ran the gamut from free-floating malaise to psychotic break and everything between. Many of us set off in a flurry of bread baking or foreign-language learning, confusing self-improvement or time killing with play. We learned how to kind of/sort of play with others via Zoom. Zoom cocktails (can be messy), Zoom game nights (logistically tricky), and admit it, a lot of Zoom sexy stuff (can be… awkward). 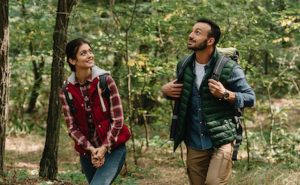 On the other hand, as we were forced to cut new grooves in our lifestyles, many of us rediscovered nature. Or discovered it for the first time. Even if you didn’t build leaf forts or monkey swing from branches, you may have been happily surprised how playful your thoughts can turn in a forest or a on hillside or even along a bike path. I suspect that’s something that will stick around for many as the pandemic lifts.

Writing in a Sandbox

As a fiction writer, what I do is playing. Swiss psychologist and famous foil of Freud, Carl Jung, nailed this. “The creation of something new is not accomplished by the intellect but by the play instinct.” Writing a novel requires a significant abandonment to play—world building, character creation, crafting innovative stories. 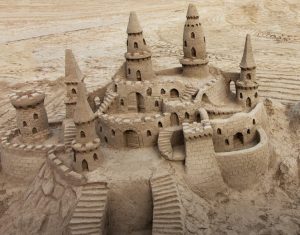 For me, the most challenging part of writing a book is getting a first draft out of my head and onto paper. Or rather into electrons, this being 2021. It’s daunting for me and it’s the part of the writing process that confounds me most. This is where writer’s block lurks in my literary world.

One of the ways I combat this problem is by overtly conceptualizing first-draft writing as play. In blog posts, author talks, or chats with young writers, this is how I describe my first draft process versus all the revisions that will follow: “I’m shoveling sand into my sandbox. Sand from which I will later fashion marvelous castles.” That visualization really helps me. When Kay-Kay asks how my writing day went, I often answer, “Just shoveling sand.” 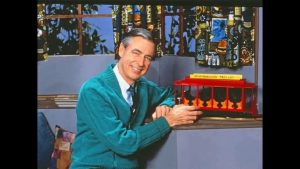 So yeah, play is beyond important. It’s vital. In these times that try all our souls, let’s take some advice from a guy we all trust, Fred Rogers. “A stick can be a magic wand. A sock can be a puppet. A small child can be a superhero.”

Remember to play. Don’t we all really want to be a superhero?