Yesterday was our local literary shindig, the annual Williamsburg Book Festival. This is held in conjunction with a much bigger cultural shindig called An Occasion for the Arts, which has become something of a juggernaut. Or at least a relative juggernaut, given that this is a smallish kind of place. (And thank you John D. Rockefeller and Anheuser-Busch for allowing us to punch well above our erstwhile civic weight.)

My first novel, None of Us the Same, was jury selected for inclusion in the Book Fest. OK, I’ll own up—it was “selected” as one of forty-odd books out of the seventy-odd books submitted. But still, it was a quality cut, right? And this on top of NOUTS (as my wife Kay-Kay calls it) recently receiving a coveted “Discovering Diamonds” review for historical fiction. So I got to hang with a bunch of other writers, schmooze with a lot of would-be readers, and actually sell a few books, and a couple of buyers even asked me to Sign Their Books.

But that’s not what I really want to write about, so here ends the Shameless Book Plugging part of this post. What I want to write about is… Winnie-the-Pooh. The Featured-Guest Visiting-Type Author Person at the Book Fest was a way-cool American lady who’s sorta, kinda British now, Kathryn Aalto. She has some of those rarefied credentials that make you go “Hmmm… maybe I’d like to…” until you realize how much time, education and effort it takes. Turns out she’s a landscape historian. To which I say, not being of a gardening ilk like Kay-Kay, “Whoa.”

Before relocating her three youngish children to Devon in the U.K. 11 years ago, she read them a bunch of Utterly Refined English Children’s Books to sort of whet their palettes for All Things British. This of course included A.A. Milne’s timelessly adorable Winnie-the-Pooh books. I was a little surprised to learn from her that there were only four of these, amounting to a total of about 60,000 words. Then Milne returned to playwriting, while collecting truly mad money in royalties off Pooh. The ubiquity of the Disney-fied Pooh, of which Ms. Aa. is not a big fan, would lead one to believe Milne had written closer to 60 million Pooh-words. 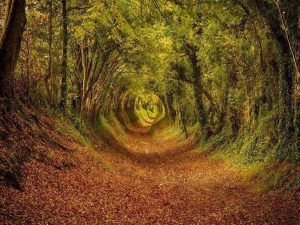 There was a slight wrinkle in all this literary Stiff-Upper Lip indoctrination Ms. Aalto did with her kiddies. Knowing Mummy to be a landscape historian and all, they insisted she take them to Christopher Robin’s Hundred Acre Wood. Very fortunate for the Intrepid Ms. Aa., said wood actually exists, albeit under the assumed name of Ashdown Forest in Sussex, near where A.A. Milne, his wife Daffodil, and their son Christopher (yep, that Christopher) lived for many years. And again lucky for her, said forest was quite close to her new home in Essex. The rest is historically landscaped history, which you can read all about in her beautifully written and lovingly illustrated 2015 book, The Natural World of Winnie-the-Pooh: A Walk Through the Forest that Inspired the Hundred Acre Wood.

During her book talk, Ms. Aa. said some things that, much more than her peculiar academic and professional credentials, made me go, “Hmmm…” Keeping in mind that most authors will do almost anything to get people, first and foremost, to buy their book, and a close second, to read their book, it was a pleasantly mild shock when this particular writer said NOT to immediately read her book. Instead, she said that we should buy her book, (of course—she’s not an idiot) but then don’t open it until we’ve gone back and re-read those remarkable 60,000 words of A.A. Milne’s and allowed them to marinate in our brains for a few weeks. Only then should we read her book. 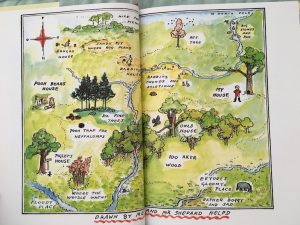 I was even more taken with her explanation. Ms. Aa.—maybe the whole double-A thing is why she likes Milne so much?—said she wanted us to read Pooh and “remember the sound and the scent of the person who first read it to you.” This was such a lovely thought—I’ve even blogged about the potency of smell memories here and here. This notion of preparing the soil for her book by asking you to recover a little of that sense of wonder you felt, secure in some grown-up’s lap, when you first met Pooh and Tigger and Piglet was quite a remarkable request, I thought.

As Ms. Aa. flipped through her PowerPoints, whenever she hit an image of one of E.H. Shepard’s sparse and delightful original illustrations, you could hear a collective sigh roll across the audience of 100% Grown-Up Type Adults. She at one point said, “I wish you could see as I do the smiles on all your faces when I flipped up this drawing.” This is a powerful tribal memory imprinted on all of us, which says something quite remarkable about Pooh, doesn’t it? 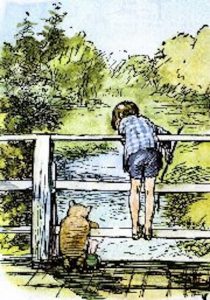 Ashdown Forest is much larger than One Hundred Acres—closer to 6,000 American acres—and there are few one-for-one correlations now to exact spots Milne and Shepard used for the stories and illustrations 90 years ago (I was, however, very pleased to know the actual foot bridge where Pooh and Christopher Robin play the highly complex game of “Poohsticks” has been restored and is in fine shape.) The forest has been preserved by H.M.’s Government and is well protected by four foresters, but it’s hardly the kind of Forest Primeval we Yanks would visualize when we hear “forest”—more well-tended stands of trees in various sizes, separated by curated heaths, or what we Americans would probably call scrubby meadows, I suppose, full of heather and gorse. As a result, the place is still teeming with all manner of wildlife.

Funny thing is, as much of a wild commercial success as Winnie-the-Pooh has been almost from the moment it was first published in 1926, Ms. Aa. reports there’s minimal exploitation of the “Pooh brand” in and around Ashdown Forest. There’s a complete lack of signage even. Certainly there’s No PoohLand, no Tigger’s Go-Kart Track, no Piglet’s BBQ Ribs. (Ouch, that last one was a bit offsides, wasn’t it?) As Ms. Aa. asked us, could you imagine if the Hundred Acre Wood was in the USA? Personally, I’d rather not.

Perhaps the most memorable part of Ms. Aa.’s presentation was a picture she shared near the end. It seems that somewhere in England, there’s a family of four—children mostly grown—who don four bright-orange and black-striped Tigger onesies, traipse into Ashdown Forest, and read all four Pooh books. Every single year. That may’ve been the most remarkable thing in the whole presentation. And I think almost everyone in that room was secretly a little jealous. including me. Orange onesies and all.

Any particular Pooh memories you’d like to share? Post them in the comments below. I’m fairly certain everyone in the English-speaking world has read or been read at least a little Pooh. If I’m wrong, it’s never too late.