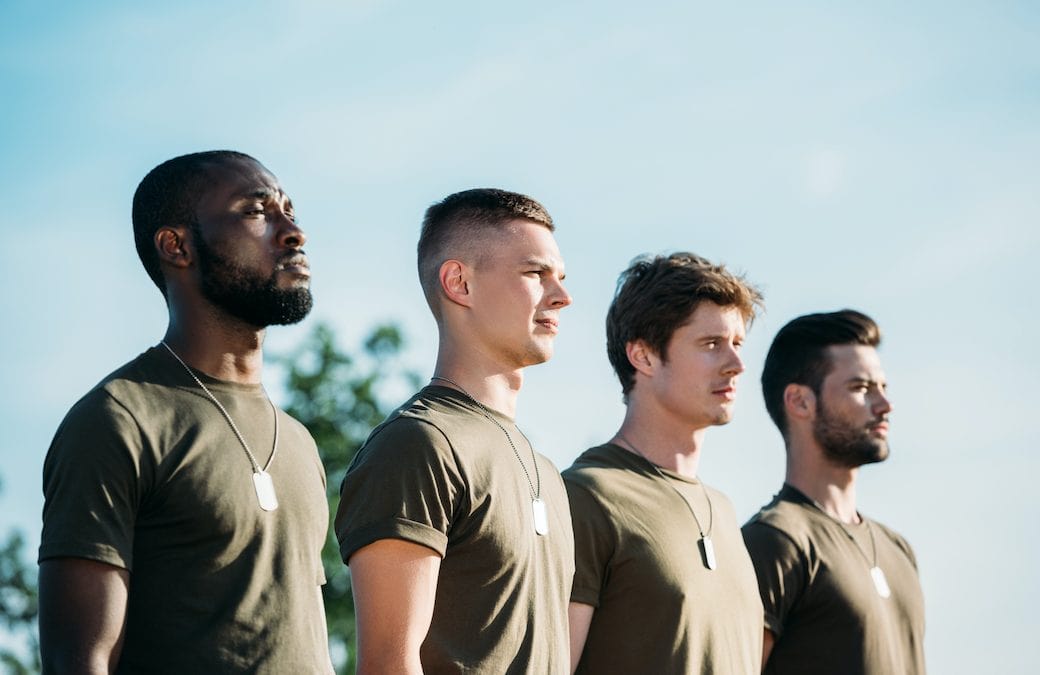 Something remarkable happened this week. In the midst of militarized police and policing military personnel, leadership of the American armed services stepped up to defend the Constitution-—starting with a couple of retired four-star officers, Adm. Mike Mullen and Gen. Jim Mattis. They were soon followed by the Chief of Staff of the Air Force, Gen. Dave Goldfein, and Chief of Staff of the Army, Gen. Jim McConville, along with their Senior Enlisted Advisors. They all reaffirmed quite publicly their oaths—and the oaths everyone in uniform takes—to support and defend the Constitution. As they pointedly reminded us, that includes the First Amendment. 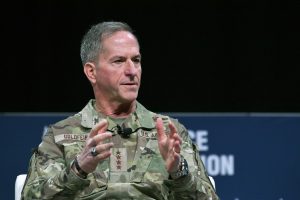 Being an old Air Force Guy—I spent the best 20 years of my life in that blue poly-blend uniform—I was particularly proud of Fingers Goldfein. Yes, he’s Fingers to me, his adolescent-sounding pilot call sign. It’s an Air Force thing. Back in ’94 – ’95, Fingers and I occasionally shared an office suite at the NATO air headquarters in Vicenza, Italy, when he was executive officer and I was legal advisor to the NATO air commander, Mike Ryan. That both Gen. Ryan and Gen. Goldfein went on to become Chief of Staff of the Air Force had, I’m sure, absolutely nothing to do with me. 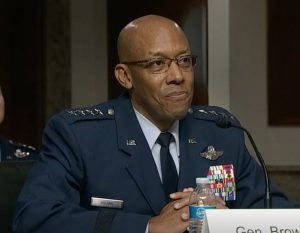 Two important things came about from Fingers’s message reaffirming the Air Force’s commitment to both colorblind equality and diversity. First, Fingers ended with a commitment to scrub the Air Force top to bottom of any residue of racial or ethnic bias, including the way they do military discipline. The second thing that really got me thinking was Fingers’s subsequent hearty endorsement of a short video published by his soon-to-be successor as Chief of Staff, the Commander of Pacific Air Forces, Gen. CQ Brown. Here’s the link to that five-minute video.

Everybody, and I mean everybody, needs to take five minutes to watch this. Here is an African-American man who, through native talent, hard work, and amazing perseverance, made it to the very pinnacle of the United States military. His video, nominally addressed to his airmen in PACAF, is his highly personal and remarkably instructive response to all the people that have asked in the last few weeks, “What are you thinking, General?” One of the things he was thinking is that there is still a ways to go in eliminating bias within our beloved Air Force. 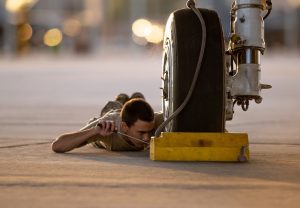 As with its civilian counterpart, there’s long-standing racial bias within the military justice system. Throughout my years as a JAG, we were well and painfully aware of persistent statistical evidence of racial bias in the way we disciplined in the Air Force. It differed from the other services only at the margins.

Let me share this story to illustrate. There’s a JAG thing called an Article 6 visit. The Judge Advocates General (or TJAGs) of the services are mandated periodically to visit each base to evaluate the “status of discipline.” These are big dog-and-pony shows with the whole base legal staff putting together a detailed briefing with PowerPoints and graphs and loads of data for the TJAG or some other high-ranking JAG to sit through.

For many of these, I had to brief the criminal justice statistics—court-martial and “non-judicial punishment” (NJP) rates. NJP is known to most in the military as an “Article 15” or to sailors as a “captain’s mast.” This is generally for misdemeanors or military offenses like showing up late for duty. The “non-judicial” part is that the airman has to consent to letting his commander be judge and jury, in exchange for a punishment that’s strictly limited to fines or restrictions or loss of a stripe, but doesn’t include jail time. Of course, the airman has to trust in his commander’s fairness. A good commander is always concerned with this. 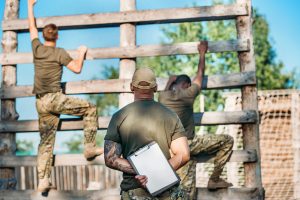 There’d be a long moment of silence with everyone shifting uncomfortably in their seats until TJAG let everyone off the hook with, “Let’s keep an eye on that” or words to that effect. And we’d move on to household-goods damage claims or whatever. I retired in 2003 but this hasn’t changed in any meaningful way since then. Here’s a 2017 study on this very issue authored by an old JAG School classmate of mine, Don Christiansen.

Cracking the Code on Racial Bias?

I was uncomfortable with this racial disparity in disciplinary actions for which no one seemed to have a valid explanation. The problem was this. You looked at statistical evidence that there’s racial bias in the way we handed out discipline in every wing of the Air Force. When you try to unpack what the problem was, you naturally began looking at individual case files or Article 15 records.

If you question the people most responsible for these decisions — the squadron commanders and first sergeants who are the first line of decision-making in disciplinary matters — they’d have a presumptively valid reason for making the decisions they did in each individual case. Trouble is, you’re trying to examine a systemic bias by staring through a soda straw. One case at a time is, well, one case at a time. And we’re still left with the question, why do they always aggregate to widespread statistical bias? 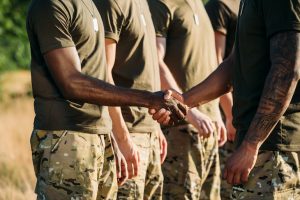 I couldn’t let this go, and I had indulgent bosses who allowed me to dig into these things… quietly. I had a good relationship with most commanders and first sergeants. (The first sergeant is a senior noncommissioned officer who serves as the enlisted advisor to a commander. They are universally known as First Shirt, or just Shirt.) So I could ask questions about their disciplinary decisions without making them feel too threatened. I found some interesting things. Nothing I could statistically verify, but  fairly compelling observations derived from a lot of anecdotal evidence. I should note that the commanders and first sergeants were overwhelmingly white and men in my days as a JAG during the ’90s and ’00s.

What I found comparing disciplinary actions was that in individual cases, let’s say an airmen who’s been late for duty for the third time in one month’s time, were often given varying discipline. For white airmen, the discipline choice was often what we referred to as “wall-to-wall counseling.” Basically a serious ass chewing and an admonition not to do it again. However, with black airmen, the result was often an Article 15.

When I asked about the difference in these decisions, I never once got a response that struck me as being overtly racist. Generally, the reply was something like, “Well, Airman White is a decent kid who just needed an attitude adjustment.” On the other hand, the answer I got for Airman Black was more often, “He won’t get it unless I hit him with a 2 x 4.” Did some white airmen get the 2 x 4, too? Sure, just not as frequently as black airmen. And the stats proved that.

This is an oversimplified illustration, but it serves the purpose. Which got me thinking, why? I surely didn’t find any commanders to be bigots—the Air Force over the past 50 years has done a good job of weeding out overtly racist knuckleheads—which made this a more difficult nut to crack. After lots of these discussions, it occurred to me that what was happening was another manifestation of The Other problem. White commanders and first sergeants, all my demographic peers, were brought up in the same American culture in which I was raised. And that means a culture awash in subtext, messaging, stereotypes, memes, and dog whistles about race. 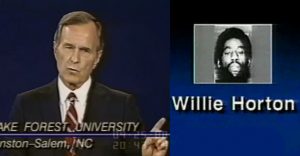 Maybe the best examples are from political campaigns when I was a younger man. Some of you may remember Ronald Reagan’s repeated theme of “welfare queens” or George H. W. Bush’s infamous “Willie Horton” campaign ad. But less dramatically than that, films and television, music and print media were (and are) awash with a thousand mini-message assumptions about African-Americans, particularly black men.

As white men growing up in America, this was in the air we breathed. So at a deeply subconscious level, we see individual black men as avatars of all this cultural messaging we received over decades. You literally don’t have to be consciously aware of your own bias. It’s just… there. So, when Airman White comes before you, you see yourself or your own kid reflected back and your “natural” assumption is that you can fix this kid like your dad fixed you or you’d fix your own son—with a good chewing out.

But when Airman Black comes before you, subconsciously you see The Other, defined by year upon year of absorbed social-cultural context. So if both are caught with a little weed, let’s say, you’re certain Airman White can be “fixed” with an Article 15, while you’re just as certain Airman Black needs to go to a special court-martial to learn his lesson. Of course, Airman White can’t get any jail time with an Article 15, but Airman Black sure can—and probably will—at a court-martial

Again, I’m not accusing anyone of overt racism. This is the kind of tenacious, deeply acculturated, and difficult to eradicate systemic racism that I hope we’re finally confronting in a serious manner. 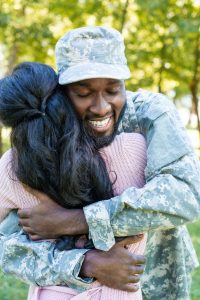 As the 2017 study demonstrated, the statistical disparities in disciplinary actions based on race have not gone away. In fact, they’re just about as severe as they were when I retired from active duty 17 years ago. And I don’t pretend to know what the answer is. What I do know is that we have to name it, admit it, then figure out some way to purge the taint of 400 years of American racial prejudice from within our military services, just as in society at large.

One of my professors when I was studying at Harvard Law was Antonia Handler Chayes, a remarkable woman who had once been Under Secretary of the Air Force for Jimmy Carter. I was chatting with her one day after class and she said she was always kind of amazed how the military was like a big ocean liner. It took a lot of effort to turn it, but when it did finally turn, it was majestic to watch it steam ahead just as determinedly in the new direction you pointed it.

So I have some hope this decades-long systemic racial bias in military criminal justice can be fixed once and for all. We just have to figure out how to turn the ocean liner.