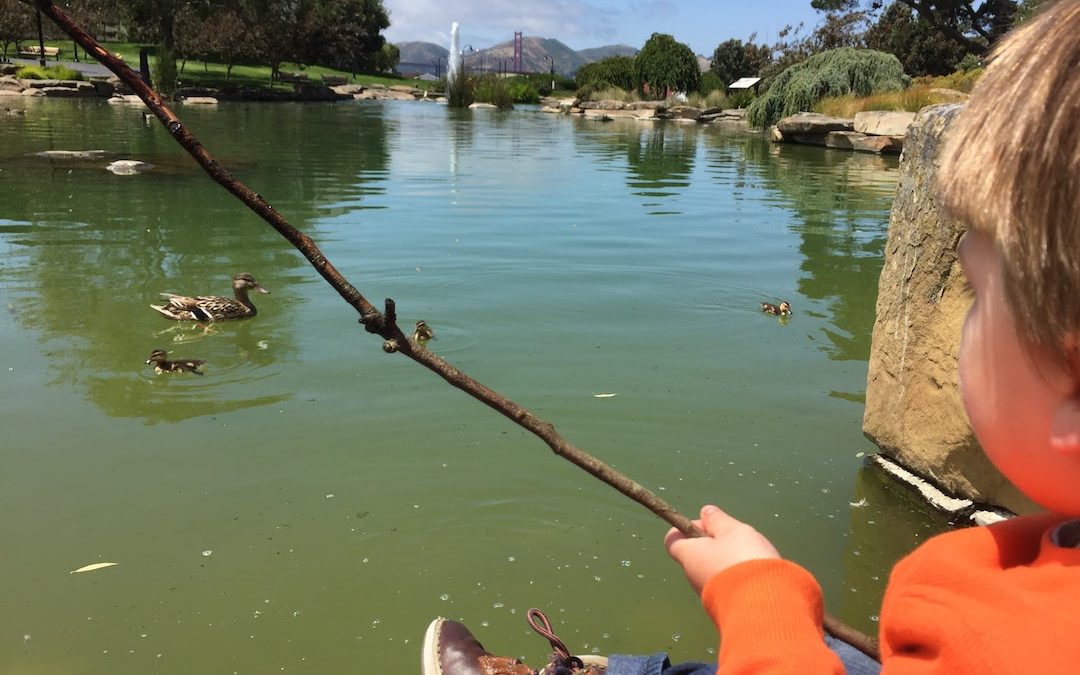 My grandson Goober is three-and-change years old and is, shall we say, rather doted upon. He’s the first grandchild on both sides of the family, with four grandparents, one aunt, three uncles, and a bazillion more shirttail variety relatives who also contribute to the cause. Which is to say he has a lot of toys. A. lot. of. toys.

Seriously, as soon as this kid sets foot out the door, he finds a stick for each hand. He’d have the inside looking like a Lincoln Logs display if my daughter, Peanut, his mommy, would let him haul all that lumber inside. 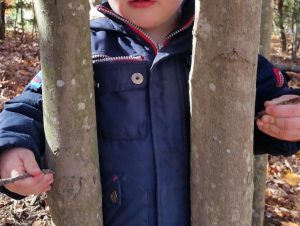 He started doing this while he was in that Drunken Sailor Stagger period of learning to walk, so I hypothesized he had somehow figured out that a stick in each hand could help him balance, like a tightrope walker with a long pole. His nana, my wife Kay-Kay, patiently pointed out to me that this level of cognition or even trial-and-error experimentation was basically impossible at the age of one. Nonsense! He’s my grandson!

My Tightrope Walking Hypothesis of Stick Selection sort of fell apart when Goober learned to walk and run with great facility. As in exhausting to watch facility. He’s kept right up with the sticks in each hand. However, I’ve noticed that the purpose of the sticks has evolved from Waving-Around-in-Wild-Glee to Whacking-Against-All-Vertical-Surfaces-Including-Adult-Shins to Incorporating-Into-Any-Kind-of-Play. (Was that too many hyphens and capital letters? Too bad—my blog.)

Which brings me to the meta-theme of this blog. I’ve wondered ever since my own kids were little—and this has been reenergized by the appearance of Goober on the scene—if toys, and by extension play, have become entirely too pre-programmed? 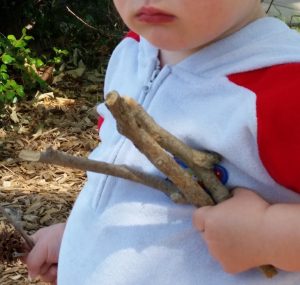 I love that my grandson can make two sticks into basically anything, then turn on a dime and remake them into something entirely different. I was on FaceTime with him a few weeks ago—and I ask how did any non-colocated grandparent even survive before Skype or FaceTime? They were in a local park and Goober had, of course, found a stick for each hand. He crossed them and was zooming them around and said, “Look, Papa (that’s me)—this is my airplane!” I said, “You know, Goobs, when your mommy was little like you, Papa’s job was flying a big airplane.” He immediately separated the sticks and said, “This is my airplane and this is the airplane Papa used to work in. Zoom! Zoom!”

And fifteen seconds later they were a fire hose…

Toys with over-determined pathways are kind of a pet peeve. Kay-Kay, having always been a Much Better Parent Than Me, was really good at making play things out of stuff she had around the house. When my son Scooter was going through an intense Teenage Mutant Ninja Turtles phase—I’m totally Team Leonardo, BTW—he really wanted a Turtles’ sewer headquarters. This being c. 1992, there was a crappy plastic version for sale, but it was small and cheesy and expensive, with me being an underpaid Air Force captain. So Kay-Kay made one out of a couple of Ball canning lids and a Girl Scout Cookie shipping box. Thin Mints, I believe, since the Turtles’ sewer always smelled incongruously minty fresh. It was bigger than the store-bought one and Scooter could put all sorts of stuff inside with his Turtle figures. I believe he tried to insert a pizza slice once.

We had that cookie box Turtle sewer for years, and Scooter passed it on to his younger brother Doobie sometime around 6th grade. It made like five house moves with us. And nothing about it was scripted or predestined.

I think Legos were the first to really start ticking me off. The idea of Legos is awesome and I’ve long loved them, although I don’t recall them being a really big thing in my own childhood—not like the ever eye-endangering Tinker Toys or the wickedly sharp-edged Erector Sets. But the idea is so cool—here’s a bunch of bright colored blocks that snap together. Go make something. 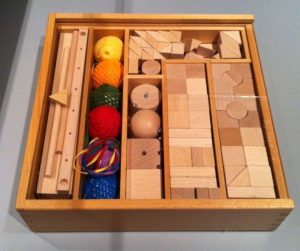 Now let’s be clear about the power of what I just wrote. An early version of this box-of-blocks concept, so-called “Froebel gifts,” was credited with turning Frank Lloyd Wright into America’s greatest architect. Well, that and a mother who declared while he was in utero he’d grow up to make beautiful buildings and hung engravings of European cathedrals in his nursery. But you get the point. 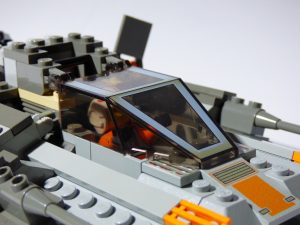 Then Lego went off the rails with all this co-branding with Star Wars and Harry Potter and whatnot. So you get this Millennium Falcon kit, you open it up, and it’s like a zillion grey blocks and a set of assembly diagrams that are, in fact, rocket science. In my opinion, the problem with this is twofold. First, the kid wants his Legos to look like the Legos on the box top. Second, obsessive fathers will succumb immediately to path dependency and neurotic goal orientation. I’m guessing 90% of those Lego “theme kits” get assembled exactly once and only get disassembled if the family moves or the kid graduates from college, whichever comes first.

Of course, the elephant in the room here is digital games and toys. It’s possible for computer games to be educational and interesting and allow for almost unlimited pathways, branches and sequels. An awful lot of them, however, have only one purpose—destroying everything on the screen in order to keep squeezing your adrenal gland until you collapse from emotional and/or hormonal exhaustion. (On the other hand, there’s Mario Karts!)

Regardless of how cool and imaginative a computer game is, however, there’s still an inherent lack of physicality to it. It’s virtual after all. Smarter people than me can differ on this, but I can’t help but believe that lack of physical connection, of tactile manipulation, of making it your own is a Bad Thing for Kids over the long haul. 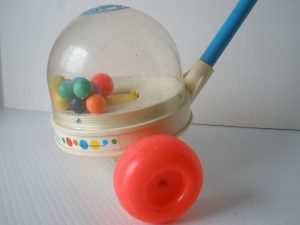 On the other hand, it’s been a joy to see so many of the old standards are still available and in Goober’s toy box. Or rather toy boxes. And toy shelves. And large plastic toy storage tubs. That funky red-and-blue Tupperware ball with the shape holes in it is still kicking around after 50 years, as is the endearingly annoying Fisher-Price Corn Popper that’s been around since before I was born. And it still puzzles me—is it supposed to be a vacuum cleaner? A floor buffer? A lawn mower?

I know it’s only a matter of a few years before my grandson starts doing all that Stuff That Will Get Him Into Stanford—tuba lessons and a t-ball team and a Little Butcher’s meat-cutting class. (I made that last one up, but how cool would THAT be?) And it’s all good, I guess. We forced our kids to learn piano and they’re all accomplished musicians in adulthood.

But I’m fairly certain his future piano teacher and future t-ball coach will make him put the sticks down.

Although maybe not that meat-cutting tutor.