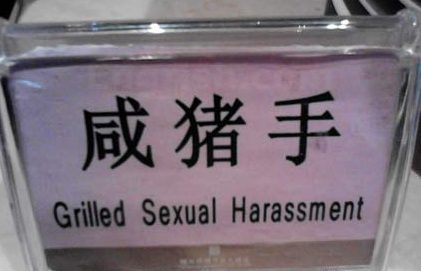 During my travels over the last decade or so, I’ve noticed something peculiar. It has to do with… t-shirts with English words on them. Not exactly an earth-shaking issue of vast geo-political significance, I know. But as with so many other quotidian matters, this makes me go “Hmmm.” And it will come as no surprise to you, my four or five devoted readers, that I feel compelled to write about this.

I’d of course noticed all kinds of t-shirts with American bands or products or sports team logos for years. Driving around the perimeter fence at Tuzla Air Base in Bosnia back in 1994 there was a clutch of boys gathered along the other side of the fence. Nothing weird there—boys will be boys and there was All Manner of Exciting Stuff going on my side of the fence. This particular day I noticed a boy sporting a new green starter jacket emblazoned with the bare-knuckles-up angry leprechaun of the Notre Dame Fighting Irish. The kid looked immensely proud and pleased, although I daresay he’d never heard of South Bend, Indiana.

My deep thinking about the matter of t-shirts began about five or six years ago. I was standing in line at the train station in Hangzhou, China, waiting to buy a bullet train ticket to Shanghai. There was a lovely 20-something lady in the line next to me. She was wearing leggings with a long t-shirt hanging over them. She turned to look at something behind me and I saw the front of her t-shirt, emblazoned with three English words in bold, three-inch high letters:

I am absolutely not making this up. Stifling an involuntary laugh, I spent the rest of my line time pondering exactly what she must have been thinking while buying that particular piece of apparel. Or was there some Chinese (perhaps Vietnamese—they’ve never liked the Chinese much) t-shirt manufacturer sitting in his office in Harbin or Hanoi chuckling at his practical joke? 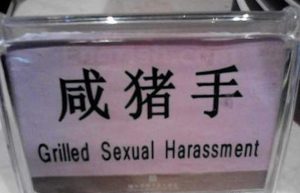 This is not completely beyond the realm of the possible. While I was in law school in the late ‘80s, tattoos were just becoming a thing and a lot of Very European-American People were sporting tattoos—often on the back of their necks for some ungodly reason—comprised of one or more Chinese characters. I tried to convince my good buddy Surfer Al, a Chinese-Hawaiian who did not read a word of Chinese—to walk up to any of these Goofy White People, glance at their Chinese-character tats, and then walk away snickering. I thought this would’ve been an incisive bit of social satire. Surfer Al, a bearer of much greater brains than me, decided it would be a good way to get his face punched and demurred.

I reengaged with my deep t-shirt thoughts during my and Kay-Kay’s recent Costa Rican odyssey whereupon one morning at breakfast a guy who seemed to be some sort of Eastern European walked into the restaurant sporting a t-shirt that read, “BLUE TEAM <anchor symbol> CAMP DAVID.” I’m fairly certain there is currently no BlueTeam at Camp David (considering the political color of the latest occasional weekend occupant), nor do I believe there is a yacht club in the Catoctin Mountains of rural Maryland. 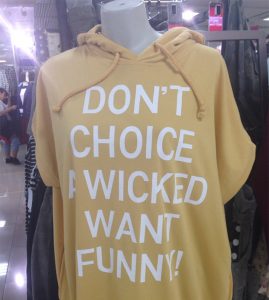 What this seemed is yet another manifestation of the pervasiveness of American—or at least English-language—culture. As long as the t-shirt appears to be something vaguely American, close enough. This seems the simplest explanation.

Since returning from Central America and my unplanned encounter with the Blue Team of Camp David, I’ve had a little flash of insight—always a dangerous thing—and I’ve come to believe my many encounters with weirdly non sequitur t-shirts is just another manifestation of Our Postmodern Age.

It took me a long time to understand what “Postmodern” even means, it being One of Those Terms that gets thrown around rather recklessly by the dimly enlightened. Like me. I’ve long known the textbook meaning—which is, of course, impossible for a true Postmodernist, since the very word “Postmodern” is itself self-referential and entirely contextual.

While I was at Georgetown with Surfer Al, I was walking across the river one day toward the main campus—the Hilltop, as it’s called. The iconic Big Old Building at G’town is Healy Hall, a mid-19th century Neo-Gothic heap of spires and crenelations and architectural confectionery. In 1970, the University stuck a new library, Lauinger, between Healy and the Potomac River. Although technically of Brutalist style—which is a way-cool term for anything, let alone architecture—it has a decided Postmodern flavor. For example, Lauinger has several big hollow rectangles stacked on top of it. It was only while walking across the Key Bridge, from which you can see Healy with Lauinger superimposed in the foreground, that I understood that the empty boxes were supposed to contextually represent the same thing as Healy’s Gothic spires—functionless doodads that serve no purpose other than adornment. This was my first Postmodern Ah-Ha Moment. It didn’t make Lauinger any less ugly, mind you.

I was bombarded with a lot of Postmodernist theorizing while studying at Harvard Law School in the ‘90s, the law not having quite taken during my three years at G’town. At Hah-vahd, I was surrounded by both a lot of ivy and many devotees of the postmodern Critical Legal Studies school. The Crits, as they are known, developed an admirable dodge to having actually to learn any law, since, of course, all words are contextual and can have no fixed meaning—just like those big hollow boxes on top of Lauinger. So why should we waste our time reading all those annoying words in all those thick law books? Having broken the code, I immediately became a devoted Crit and spent the rest of my time at Harvard sitting outside the Au Bon Pain in Harvard Square, smoking clove cigarettes and looking more bored than a French philosopher. OK, I made up that last part. 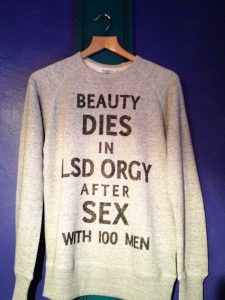 But the Postmodernists are definitely onto something when it comes to t-shirts. You see, I’ve come to realize my ACNE Lady from the Hangzhou train station wasn’t communicating anything about skin conditions. She was saying, “I’m hip and I’m trendy and I’m wearing English to demonstrate that.” The actual words meant nothing to her. But they were hilarious to me as a native English speaker. Thereby vindicating the Postmodern critique of language being devoid of fixed meaning and entirely contextual to the individual reader. I’m pretty sure that’s how it goes. At least that’s what we said at the Au Bon Pain.

We’re now in an interesting age of postmodern language. It may have started with Bill Clinton and his famous, “That depends on what the meaning of ‘is’ is.” (Of course, that very question was at the heart of the Protestant Reformation 600 years ago. What did Christ mean when he said, “This is my body,” after all?) George W was accused of being a linguistic Postmodernist, but I think he was more of a linguistic Doofus-ist. Obama was exceedingly punctilious in his use of words, being something of a smartypants, after all.

During the ’16 Presidential Campaign, some commentator wrote something that’s stuck with me. S/He said that the big difference between diehard Trump supporters and rabid Trump opponents is that the former take him seriously but not literally, while for the latter it’s the opposite. That’s a seriously profound piece of punditry right there.

Beyond t-shirts then—and you know I always sneak in some Big Idea—what will this decoupling of language from agreed-upon meanings do to us? If we can’t even agree on what a word means, how can we handle the tougher challenges like, say, agreeing on what’s our best way forward as a community? As a nation? As a planet?

Regardless, we have to start somewhere. Maybe with t-shirts.