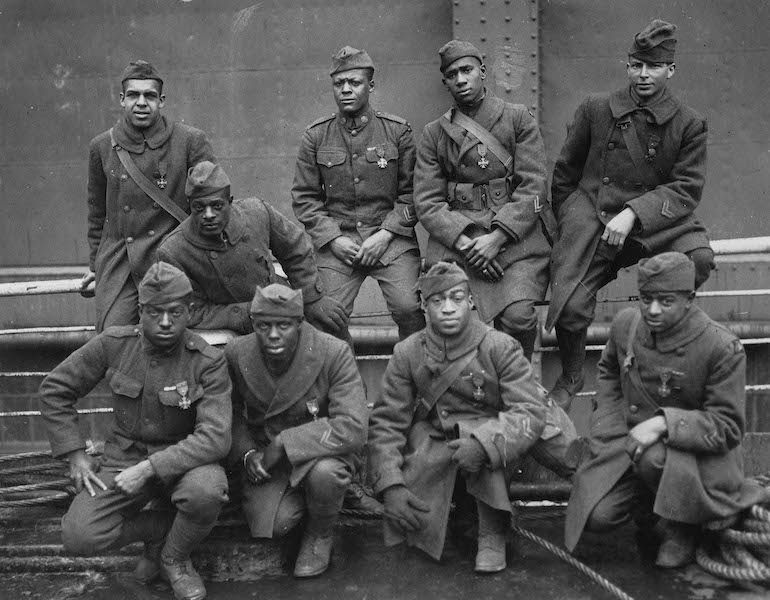 The 6th of April 2017 marked one hundred years since the United States declared war on Imperial Germany and entered the First World War on the side of the Entente Allies. Centenary commemorations have been ongoing for almost three years in Europe, lest we forget that The Yanks [Were] Comin’ rather late to the fight.

The American war experience lasted just twenty months, beginning to end, with U.S. forces actually engaged in holding their own trenches and fighting real live Germans for about eight months, March through November 1918. America lost 117,000 soldiers in France—about half of those to Spanish influenza and other diseases. The French lost 1.4 million. The entire British Empire lost over 1.1 million. To put things in perspective, the French lost about 4.3% of their population and the United Kingdom about 2.2%. The United States? Just 0.13%.

The War looms large in the national narratives of several countries for which the conflict marked their emergence onto the international stage as co-equal members of the community of nations. Having been an invited guest at two days of ANZAC Day celebrations hosted by the Australian Embassy in Washington, I can attest to two things. First, this is the biggest national holiday for both the Aussies and the Kiwis. Second, said Aussies and Kiwis, every single one of them, drink like Vikings with two hollow legs. Seriously, trust me on this and never get between them and the bar.

The more abbreviated American experience in the Great War did, however, have important social knock-on effects that went well beyond casualty numbers. It produced, for example, many of our Lost Generation writers, nearest to my heart being Ernest Hemingway, who was wounded as a young ambulance driver on the Italian Front (Italian Front??? Show of hands?) and thereby gave us A Farewell To Arms. It also stoked others’ work, like John Dos Passos, Archibald MacLeish, and e.e. cummings, whose capitalization was apparently a casualty of the War.

More geopolitically, it taught Americans two important things: 1) we were now, like it or not, by default the Arsenal of Democracy, and 2) we didn’t want much more to do with those tetchy Europeans. After the War, much to the chagrin and physical health of President Woodrow Wilson, Congress rejected the League of Nations and turned decisively inward, having had enough “European entanglements” after our notably brief stint in the trenches. This goes far in explaining why the First World War is often called “the Forgotten War” in American historical usage.

It’s what the First World War represents in the Grand Sweep of History that’s always fascinated me. It was, without argument, the first full expression of the awesome and terrible destructive power of which industrialized mass production was capable. If you could mass produce Model T’s and light bulbs, you could mass produce machine guns and artillery shells. It was the First World War that witnessed the confluence of near parity in technological and productive capacity across most of the belligerents, coupled with the universal mobilization of massive citizen armies. Layer these with the pig-headedness of the military leadership on all sides who relentlessly pursued their strategies of sausage-grinding attrition and it’s astounding so many survived.

The First World War looms much larger in Europe. I lived in northern Italy for three years back in the ‘90s, in those glorious foothills of the Alps, the Dolomites. Our village sat smack in the middle of what had been the front lines of the high-altitude standoff between the Italians and the Austro-Hungarians during the War. Like Gallipoli and the Russian front in the east, this was a theater of war not much known, taught or discussed in the United States, even though an American regiment fought there late in the War. Driving the highway that ran along the foot of the mountains, the piazza in every village contained a statue or memorial honoring i tutti caduti—All the Fallen—of the Great War. So the Italians and Austrians did what the French, British, Americans and Germans did in France—trench warfare with massed artillery and machine guns—only in the snow at high altitude. The Italian mountain troops, the alpini, earned an enduring reputation there. Go hiking with any two Italians and sooner or later they’ll break into some full-throated alpini marching songs from the First World War.

The impact of the unimaginable suffering from this fifty-one month conflict lingered for decades. This was the first war that saw a (kind of) reliable system of widespread medical evacuation from the battlefield with a (sort of) efficient multi-tiered network of transport and treatment facilities reaching right back to the home countries. This meant that, for the first time in history, significant numbers of horribly wounded men who would have died on the field in earlier wars survived their injuries. As a result, the streets of European cities and towns were populated with constant reminders of the War—empty sleeves and trouser legs, disfigured faces, gas-induced blindness, and trembling shell shock. There was also a generation of women within which a shockingly high number simply never had the opportunity to marry and have children—there just weren’t enough husbands to go round.

The American forces fought bravely, but they also took some bad habits with them to France. For a novel I’m working on (due out in the Fall), I’ve spent a lot of time researching how African-American troops—‘colored’ or ‘Negro’ soldiers in the accepted parlance of the time—fared during the War. The first American units to enter the trenches were the colored regiments of the 93rd Division. Because the U.S. commander, General John J. Pershing, who was ironically enough nicknamed “Black Jack, adamantly opposed colored troops fighting alongside his white American soldiers, he parceled out the four regiments of the 93rd to the French Army. I fact, the American unit that stayed under fire the longest—191 days—in the First World War was the 93rd (Colored) Division’s 369th Infantry Regiment, who came to be known as the Harlem Hellfighters. (The Germans gave them the second name; the hometown of 70% of the volunteers was responsible for the first.) That these men returned home to one of the worst orgies of lynching and racial violence in American history during the “Red Summer” of 1919 must have been the bitterest of pills to swallow.

In one of the finest works of social and intellectual history I’ve ever read, The Great War in Modern Memory, the American academic Paul Fussell examined how the collective trauma of the War on combatants and noncombatants alike smothered assumptions about the inevitable beneficial progress of modernity that arose during the 19th century. Rather, the War saw the same science and engineering that was to make human life incrementally and inevitably better turned against humanity in inconceivable and horrific ways. The effects of this realization washed across every aspect of society, including art (the Dadaists and Surrealists), music (Stravinsky), literature (the Lost Generation writers and poets), politics (pacifism, isolationism), and religion (steep declines in practice). We still feel its echoes today, in the relativistic and contextual notions of post-modernism in art, literature, law, and architecture.

I guess there isn’t much cheery to say about the First World War. It represented the end of innocence for the United States, the beginning of the end for the European monarchies and colonial empires, and was a seedbed for the malignancies of fascism and Stalinism. On the other hand, the War did say something remarkable about the durability of the human spirit, striving, persevering and surviving in the face of unimaginable horror and personal suffering.

It’s been one hundred years since the doughboys marched off and settled the American’s IOU to the French dating back to our own Revolution. General Pershing famously visited Lafayette’s tomb immediately after arriving in France in 1917 to proclaim the debt redeemed. Maybe the finest remembrance would be to learn the tragic lessons taught by the Great War, lest we be doomed to repeat them.

What do you think? Did you learn much about the First World War in high school U.S. History? Am I totally off base here?