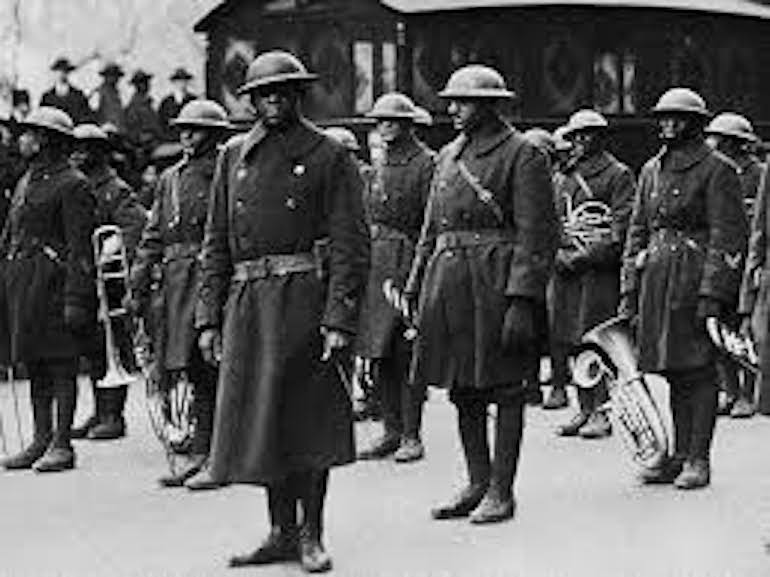 In keeping with the trendy notion of Safe Spaces, this blog is a Politics-Free Zone. I want it to be place where both the blogger (me) and the scantily few number of readers (you) can exhale and think about things that don’t include, well, You Know Who. If you want my political primal screaming, I save that for my Twitter feed. There’s plenty there, I assure you.

That said, today I’m going to write about race. “Say what???” I hear you uttering, while shaking your head with that Looney Tunes gaggada-gaggada sound. Yes, race—but in an historical context. Turns out that the second book in my World War I and 1920s trilogy involves some characters from the revered 369th U.S. Infantry Regiment, the storied “Harlem’s Hell Fighters.” It will come as no surprise that almost all these doughboys were African-Americans.

My first book, None of Us the Same, was set (mostly) in Ireland and Newfoundland and involved (mostly) white characters, although the two African-American main characters in my second book appear as supporting characters. I roughed out the entire trilogy even before starting on Book 1, so I’ve been delving into the 369th and 1920s Harlem for the better part of a year now.

While researching Truly Are the Free—the title is from a poem by Roscoe Jamison entitled “The Negro Soldiers”—I was deeply moved by the real-life story of the men of the 369th. As a result, I found myself in the midst of a novel (heh, heh) problem—a case of truth being stranger than fiction. Or in this case, more heroic than any fiction could aspire to be.

The 369th began life as the 15th New York Infantry Regiment, a National Guard unit, just three years before the U.S. entered World War I. The governor and state legislature, after much lobbying by some Influential White Guys, finally agreed in 1913 to constitute a “colored” regiment to be based in Harlem. The leading voice in this effort was a successful Midtown lawyer named William Hayward. In his military alter ego of Colonel Bill Hayward, he would serve as founding commander of the regiment and lead them throughout the War.

The 15th New York was shortchanged on basically everything for three years before shipping out for France in November 1917. They had no armory, drilling where and when they could. Until U.S. entry into the War, they still had some soldiers wearing surplus “Union blue” uniforms and never had enough rifles for all their troops. Those that they did have were scrounged from state surplus stocks by creating bogus “shooting clubs.”

Most of the captains were white as were about half the lieutenants. This may sound odd to our modern sensibilities but was in keeping with the era. All of the enlisted men were black. That the 15th New York had any black officers at all was progress and the African-American community in Harlem and beyond embraced the unit as representative of the best of their men.

When the U.S. declared war on Germany in April 1917, the Secretary of War, Newton Baker, was determined that all America should unite in support of the war effort—including the 9.5 million African-Americans who comprised 10% of the population. He managed to get the segregationist President Woodrow Wilson to go along with this idea, so Baker ordered the War Department to ensure black soldiers were placed in combat units as well as labor units. In reality, the great majority of African-American soldiers who served in France were assigned duties as stevedores at the ports, as construction gangs building base camps and railway spurs, and to any other variety of stoop labor.

The commander of the American Expeditionary Forces, General John Pershing, was not in the least thrilled about black soldiers fighting alongside his white troops and resisted Secretary Baker’s edict mightily. He managed to square the circle by fobbing off four colored regiments on the French Army. Let us say that the French, having already lost over a million men and recently endured mutinies in half their regiments, were trés heureux about getting Sammies (as the French referred to the Americans) into their depleted front-line divisions. So the now-federalized and rechristened 369th U.S. Infantry found itself in the trenches as part of the French Fourth Army. They would remain under enemy fire with the French for 191 days, the longest of any American unit to serve in the War.

The men of the 369th were treated by the French just like their poilus (“hairy ones”—the universal nickname for French soldiers) with little or no regard for their race. This was even after the American general staff pressured their French counterparts into issuing a loathsome general order (almost certainly written by the American staff) concerning treatment of black American soldiers. Suffice it to say this order included every racist canard and Jim Crow falsehood to be found in any Southern state of the time, up to and including “keep them away from your white women.” Yeah, that.

The men of the 369th were forever changed by their experience overseas. They’d done their duty with honor and sometimes astounding courage. Having served as well or better than their white comrades, the Hell Fighters (a nickname bestowed by their German enemy) were certain they would be returning to a vastly different America, one that would welcome them back as equals. This was not to be the case, making the heroism of the men from the 369th and other colored regiments all the more remarkable.

It’s hard to fully comprehend the horrible sense of disappointment and disillusionment these doughboys must have felt. Unlike their white counterparts, black soldiers were stripped of all weapons before leaving France. Once back in the States, they were immediately confronted by the widespread racial violence of the “Red Summer” of 1919 in which whites exacted a terrible toll on black communities in cities—northern and southern—right across the country. These wretched events included a riot in Norfolk, Virginia, in which just-landed African-American soldiers returning from France were set upon and beaten by white sailors and Marines.

Yet the experience of the Hell Fighters and other black Americans who served with the French showed them in stark relief how things could be different. This lit a fuse that would burn and righteously explode in the Civil Rights Movement of the ‘50s and ‘60s. What these brave men endured, therefore, was not completely in vain.

One interesting side story about the Hell Fighters. Colonel Hayward saw that the vibrant musical scene in Harlem—this was the heyday of ragtime and the early days of jazz—provided a unique tool for recruitment to the 15th New York. He solicited donations from his wealthy white friends to establish a supplementary fund to provide the 15th with the best regimental band ever assembled, drawn from the fine musicians of Harlem. The band leader, Captain Jim Europe, was a jazz pioneer who played any venue to be found in France after the regiment landed. The band became wildly popular with the French public, having cannily created a jazz version of “La Marseillaise” that they played without fail at every concert. Captain Europe and his band are credited by many musical historians with bringing jazz to France and the wider continent. Sadly, Jim Europe barely survive the War, stabbed by one of his own drummers while touring the band in Boston soon after their return from France.

Truly Are the Free will be out soon and I hope two things for my book. First, that you’ll read it and enjoy it. Second, that I’ve done right by the memory of Harlem’s Hell Fighters.