On the Joys and Sorrows of Being a Cubs Fan 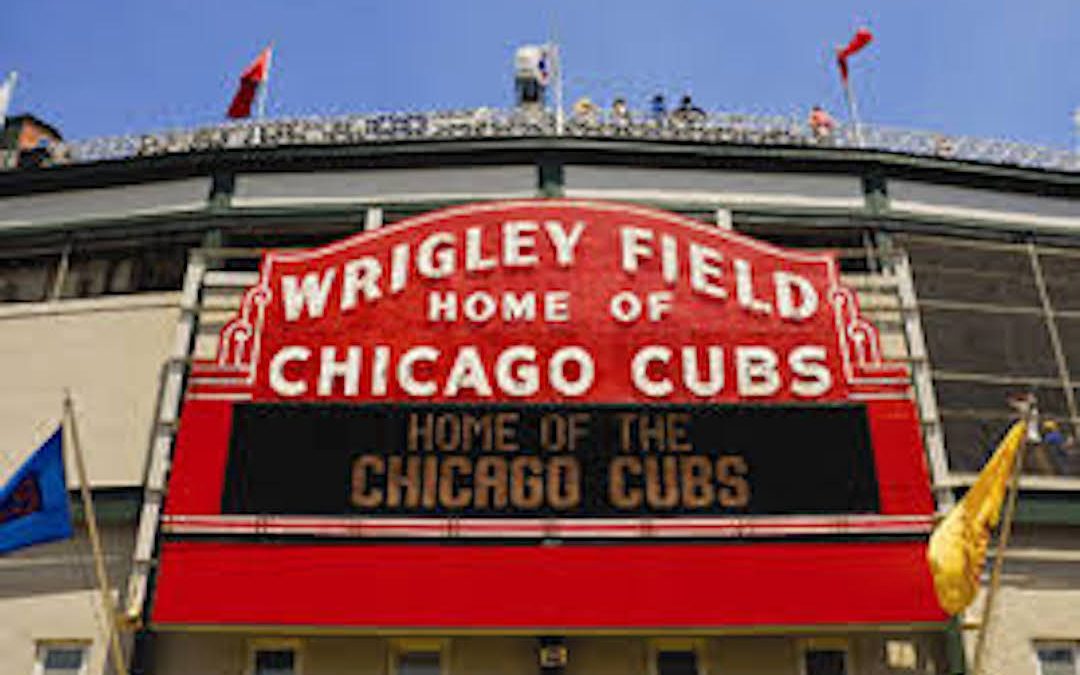 No Hero’s Welcome, the final volume in my Sweet Wine of Youth trilogy, came out yesterday. Pretty exciting stuff. Unfortunately, I’m busy with some not-so-exciting stuff, so I’m republishing a blog post that proved quite popular, just in time for the National League pennant race. Go Cubs!

I’m writing this blog The Morning After. I have to capture on paper my Sweet Hangover. For the first time in my lifetime, my father’s lifetime, and (almost) my grandfather’s lifetime, the Chicago Cubs are World Champions of Baseball. (I claim the privilege of using lots of Random Capitalization—kinda makes me feel German.)

Even as I write, there are oceans of ink—or bytes, this not being 1964 for crying out loud—being spilled on this Most Epic Event in Human History. My blog, my rules, so I’m going to add my Two Cents. 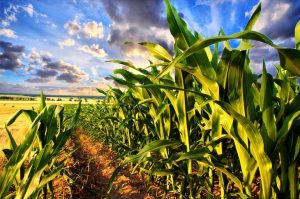 I grew up in the Greater Chicago Area, if you squint at the map a certain way and expand the circle to include a lot of cornfields. My childhood home was exactly 100 miles from the Loop, but Chicago was our nearest Big City. Although closer to Comiskey Park, nobody I knew as a kid, with the exception of a few contrarians with Polish last names, was a Sox fan. The Cubs were both the Downstate Team and the Irish/North Side Team, so I fell into line at a young age.

That first game at Wrigley was enough to ensure lifelong loyalty from any kid, but not for the reasons you’d expect. Sure, the ivy was cool and what human with a Y-chromosome doesn’t love a well-kept lawn somewhere deep in his reptilian brain. That part responsible for the ‘fight or flight’ and ‘mow or trim’ responses.

But what hooked me was the urinal. Really.

Before those Ghastly Lights and Other Crimes Against Humanity, Wrigley Field had these impossibly long stainless-steel horse-trough urinals. I mean like FORTY YARDS long. Using them was a Boyhood Adventure Story. The Fourth Inning/Third Beer Phase of the game was prime urinal time. If you were (un)lucky enough to stand in front of the Lone Drain, you were witness to an Awesome Natural Phenomenon—a raging and roiling cataract of urine running at approximately 32 gallons per second, with cigarette butts shooting the rapids. As a child of eight or nine, this was a rare and sublime form of Performance Art. 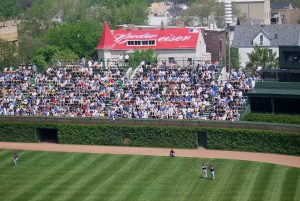 There was other Cool Stuff at Wrigley, too. This very seldom included the Cubs, mind you. Since it was 100% day baseball Back in the Day, we loved watching the Office Workers Playing Hooky in the storied Left Field Bleachers. They each had a newspaper folded under an arm so when the TV cameras panned between batters or inning halves, they could raise their paper to hide their faces. Some posit this as the origin of The Wave. I’ll go with that story. They never seemed to figure out that their bosses were in the boxes behind the Cubs’ dugout because they could afford better seats. 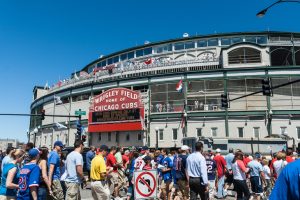 As we grew to teenagers, we joined the Old Guys—they were 28 or maybe even 34—in the Left Field Bleachers, too. There used to be a big section of chain link fence visible from the field and no shortage of empty beer cups, so we helped put up messages by sticking cups between the chain links. This was usually “Go Cubs!” which, by the Eighth Inning/Eleventh Beer Phase of the game, we somehow managed to misspell. And remember this was decades before every high school athletic field in America was red-cup festooned with “Happy B-Day Brandi” or an outline of a penis pretty much every morning. 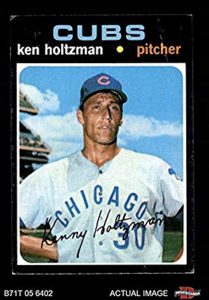 The first clear memories of my trip down the Via Dolorosa of Cub Fandom was 1969. This was a Year of Great Hopes and the Cubbies were on fire. In August, Ken Holtzman even threw a no-hitter against the Braves without striking out a single batter. Seriously. Look it up. I mean, there was Magic In The Air. They made it to September eight games in first place in the NL East, back when the World Series was in mid-October and there was no NL Central.

This was, as Fate Would Have It, also the year of the Miracle Mets <ptooey>. I was in that Sweet Spot of Youth where hero worship and baseball card collecting hung in gentle equipoise with the nascent joys of both tribalism and fanaticism. I can still name the entire starting lineup, pitching rotation, and bullpen of the ’69 Cubs. I traded a Willie McCovey, a Rod Carew, a Pete Rose and a Denny McLain just to get Cubs’ shortstop Don Kessinger to complete my set. Crazy, right? 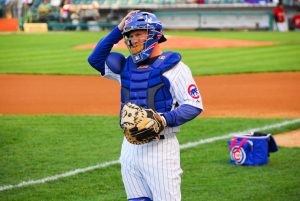 Alas, after the 1st of September, the Cubbies began what was, even for them, an Epic Swoon that allowed Tom Seaver and the Mets <ptooey> to win the NL East, the pennant, and the World Series. This also ensured the hallmark of a Really Serious Cubs Fan is a deep and abiding hatred for the Mets. We have longer grudge-memories than the Serbs.

I was devastated as only a boy jacked up on a zillion sticks of that powdery pink gum that got all over your Willie Mays can possibly be. I’ve suffered the after effects of this for nearly five decades. Until last night. 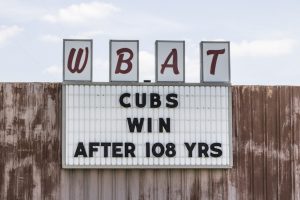 We don’t have cable, having Cut the Cord, so my wife and I Old Schooled It and listened to the ESPN Radio broadcast. That was somehow fitting, it seems to me. The Cubs did not disappoint, showing genuine flashes of Classic Cubs Buffoonery— who gives up two runs in the seventh game of the World Series on a wild pitch?!?—but still managed to Slay the Billy Goat in the end.

I sobbed like my nine-year-old self after that Final Out, the game in the balance to the very last. Unlike my father, I can die knowing I walked the Earth when The Cubs Were World Champions. If any of you say it’s only a game, that just means you’ll never really understand.

Gotta be different and better recollections out there in CubFanLand, am I right? Care to share?

[The final novel in my Sweet Wine of Youth trilogy, No Hero’s Welcome, is now available. You can find my first two books here and here.]