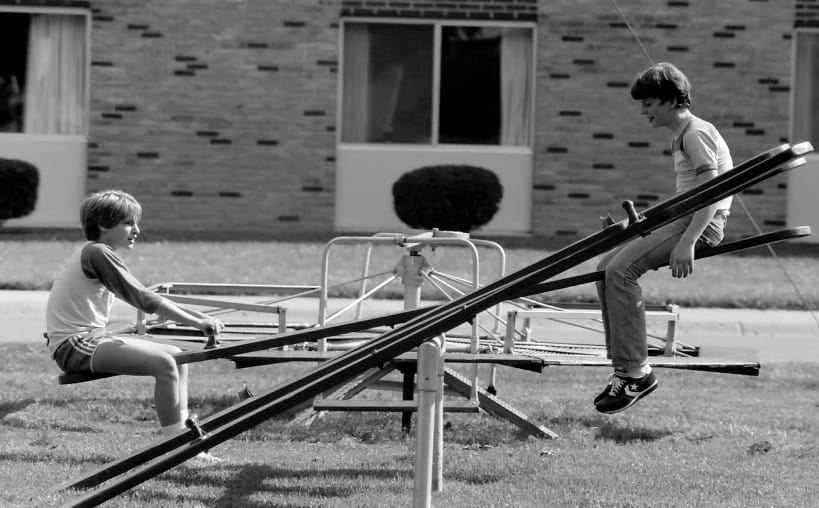 I just spent three weeks in a state of continuous exhaustion with my six-year-old grandson, Goober. Seemed like a good idea at the time, my wife flying out to the Left Coast and schlepping him back for a stay with us on the Right. For three weeks. In a row. In which we engaged in some mildly dangerous play.

One thing that occurred to me whilst collecting a half-dozen bruises from water slides and roller coasters, was how he takes safety for granted.

This Is Now, That Was Then 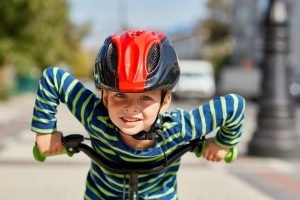 He’s grown up knowing nothing but bike helmets, for example. He simply sees “wearing a helmet” as an integral component of “riding a bike.” It’s his Papa—that would be me—who sighs and rolls his eyes. Doesn’t even cross Goob’s mind to whinge or whine about it this Least Dangerous Play.

Which got me pondering the wide gulf between how safe kids’ play is in 2021 than it was in, say, 1966, when I was Goober’s age. They are parallel universe different. 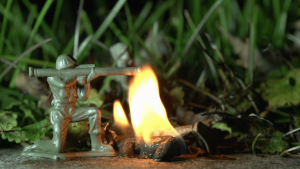 Let’s start with bicycles. Of course, the aforementioned helmets were completely unknown when LBJ was president. Visualizing what we would have done had Mr Scott beamed down a bike helmet into our midst is hilarious. We probably would’ve filled it with Army Men, set it on fire with Dad’s lighter fluid, and blown it up with a couple of M-80s brought back from a vacation to the Ozarks. 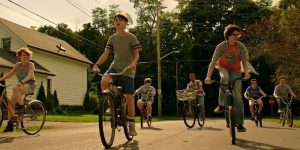 But beyond helmets, biking in general was a less regulated proposition in my childhood. By unregulated, I of course mean “Mad Max”-dystopian biking. We were completely unrestricted in where we rode. In hindsight, I had the run of Skeeterville on my bike from a shockingly young age. 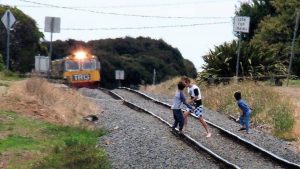 Please banish any images of some Mayberry-like pastoral idyll from your mind. My hometown was 6 miles x 7 miles with two intersecting state highways. There were six railroad lines with dozens of grade-level crossings, most unregulated. A bisecting river sported two bridges and very steep banks. With eight or nine sizable factories, there was a lot of heavy truck traffic.

Very dangerous play indeed. And yet we ranged across our wee metropolis, mothers not much caring until we were late for dinner.

Biking in the Bubble 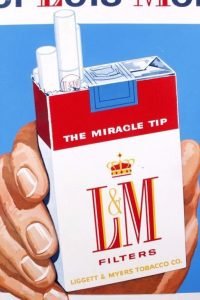 Goober, on the other hand, is strictly monitored at all times while biking, limited to cul-de-sacs and parks, always within sight of a responsible adult. The very opposite of our dangerous play of yore.

The only time and manner in which my father watched me bike was impatiently after sending me around the corner to the Pic-a-Pac. This was to pick (several) packs of L&Ms and a (six-)pack of Miller High Life. The store’s moniker was as descriptive as it was alliterative.

[Author’s Note: Yes, the owner of the Pic-a-Pac sold me cigarettes and beer for my father. Up until age 12, because he had once been a 12-year-old boy, too. It was a simpler and more lawless time.]

Sure, there were a few kids who had spectacular bike crashes or even impacts with cars. I don’t remember anyone dying, but there was a kid or two who, after taking a nasty spill, were considered a “little bit off” temporarily. Or permanently. Just the sunk costs of our dangerous play. 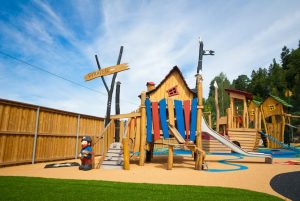 Another stark difference between Goober’s and my childhoods is playgrounds. The modern playground has splinter-proof plastic climby things and not-scalding plastic slides, all securely erected above squishy synthetic ground cover that cushions little falling bodies. I mean, a kid would have to work diligently to break anything in these wonderlands of consumer-safety productitude.

Not so the ’60s playground, which was modeled after Army boot camp obstacle courses and Viet Cong boobytraps. I am almost certain. The more dangerous the play, the better. 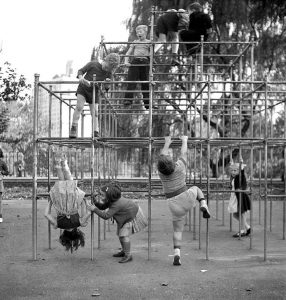 Our jungle gyms were solid steel piping that scalded in summer and froze ungloved hands to it in winter. We all put our tongues on it in January, at least once. We hung upside down from our knees, heads pointed in the direction of gravity, directly at the underlying asphalt. (For years, I thought it was “ass-fault,” having landed posterior down many, many times.)

Our swings were flat boards hung from long chains that traversed outrageously wide arcs. There was always a little pea gravel patch you could fall into when you launched yourself off to satisfy a taunting dare. Pea gravel is neither squishy nor synthetic, mind you, but was rounded enough to be readily tweezered out of bare knees before a slathering with shockingly red and memorably stinging Mercurochrome. (We called Mercurochrome “monkey blood.” It’s now banned from sale in America by the FDA.)

Round and Round, Up and Down 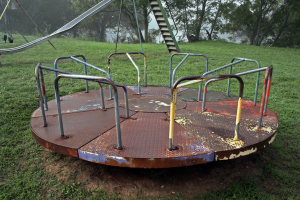 My favorite now-contraband playground fun-maker was the merry-go-round. This was a scurrilous misnomer. Far from a jaunty, calliope-infused carousel with painted ponies, it was a solid-steel Implement of Dangerous Play. One or more kids would grip on for dear life while another kid—usually older and stronger—spun them around as fast as possible. This was an early physics lesson in centrifugal force. You either lost your grip and were thrown bodily from the merry-go-round or you clung on desperately until vomiting up your fluffernutter sandwich.

Our slippery slides (as they were always denominated) were also solid steel, very tall, often precarious, and always with highly butt-polished sliding surfaces. These selfsame sliding surfaces absorbed solar energy like a heat exchanger. You could get second-degree burns if you slid down in shorts on a hot summer afternoon. But you only did this once in your entire lifetime. There’s no additional learnin’ from the second kick of a mule. Same with crossing the line in dangerous play.

But by age 12, we put aside childish things and moved on to arson and explosives. 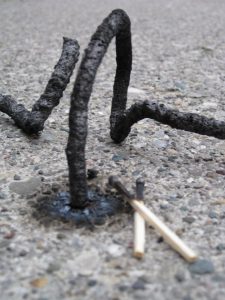 Fireworks weren’t sold—legally— in my home state when I was young. The only ersatz versions allowed were sparklers and those little black tablets you lit (with great difficulty) that burned into long wormy ashes. Sparklers themselves weren’t particularly dangerous, but their burned-out red-hot wires were. Among my generation of pyro-scamps, probably 90% have a telltale long-narrow-burn scar on some appendage. The black ash-worms just stained the sidewalk wherever you lit them.

But there was a lucrative smuggling trade in fireworks bought in from other states. Whenever a friend announced they were headed to Georgia or Texas to visit family, we gave them several weeks’ allowance and requests for Roman candles or black cats or M-80s. And always—I mean ALWAYS—cherry bombs.

The Beauty of Cherry Bombs 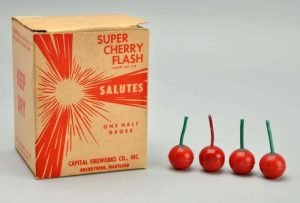 It’s unlikely Goober will ever know the simple joy of Blowing Things Up with cherry bombs. Congress banned legit ones in 1966 (because they’re really quite dangerous) and again in 1977 (because were still getting our hands on a lot of Mexican ones). The Feds left us only a pallid, flaccid substitute one-tenth the explosive potential.

The nuanced beauty of the cherry bomb was that it had a hard shell, not a cardboard tube, so that it could explode underwater. This allowed us to light them and, for example, toss them in the river. It made a satisfying WOOMPH sound with an accompanying plume of water, just like those World War II depth charges. This was often followed several seconds later by several stunned fish floating to the surface. They’d swim away after a minute or two, so we didn’t feel too bad about it.

Most notoriously, cherry bombs could also be tossed down plumbing. Especially toilets. Particularly toilets in your school. This was either uproariously funny or, depending on the quality of porcelain and age of pipes, disastrously destructive. But you bought your ticket and you took your chances. Either way, you would be a hero of grammar-school lore for a generation. An Achilles of Dangerous Play. 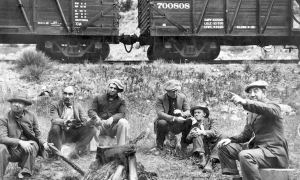 Mothers were’t too amused by our explosive antics. I recall after one misuse of explosives or another, my mother—as she was wont to do whenever I disappointed—threatened to “sell me to the gypsies.” She’d vaguely indicate where the gypsies were located, just to emphasize the point.  Alternatively, she might have threatened to “drive me down by the Santa Fe depot and leave me in the hobo jungle.” This was more ominous, given that hoboes weren’t noted for playing tambourines or telling fortunes. And I knew where the depot was.

Goober will never be threatened by his mother, my daughter, Peanut, with either gypsies or hoboes. Perhaps “indigenous nomads” or “shelterless persons,” their home being Northern California. But that just doesn’t freeze the blood, does it? 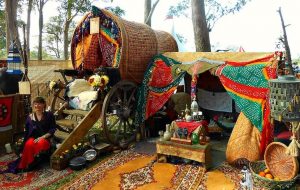 I remained skittish about passing the old Santa Fe passenger depot up until I left for college. A little tightening in my stomach, but enough to remind me of that hobo jungle threat. Gypsies were less traumatic. This was until when living in Italy in 1995, an actual encampment of bona fide Roma people—a less derogatory term for gypsies—sprung up across the dry creek bed from our house. This triggered primordial anxieties in my reptilian brain stem. They stayed a month or so, never bothering us.