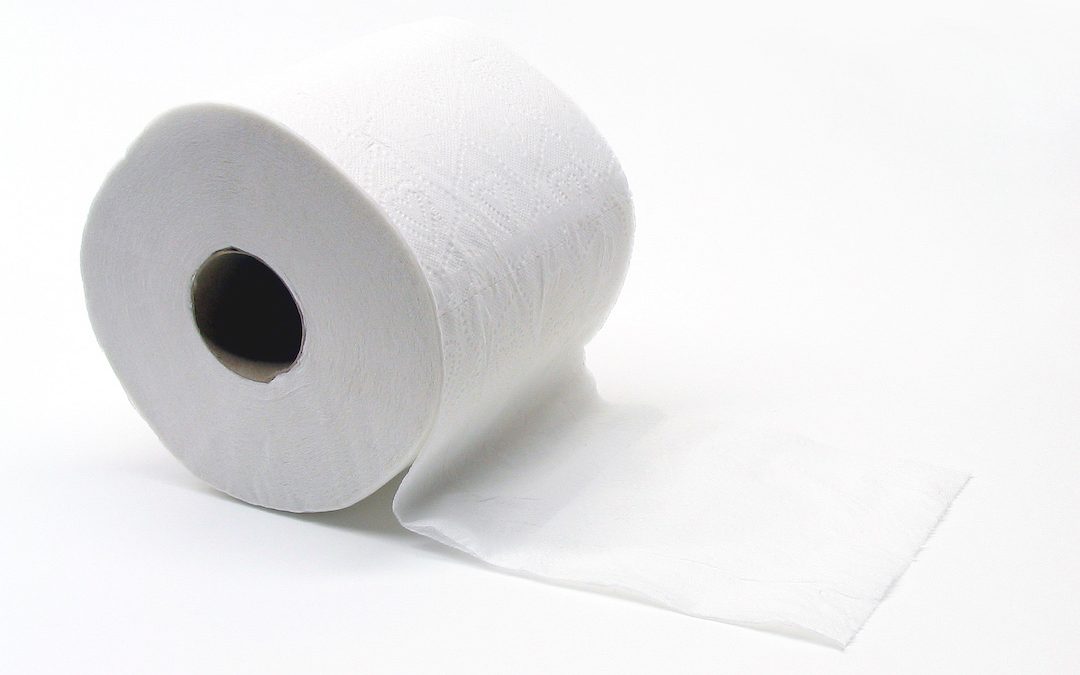 It’s time to have That Talk with you. Perhaps well past time.

(No, not THE Talk. If you haven’t had that one yet, please contact your parents immediately. Better yet, contact your father directly, particularly if you’re a woman. Because fathers like nothing more than having THE Talk with their daughters. Really. Trust me.)

I am, of course, referring to That Talk about Toilet Paper.

I’d have preferred avoiding it, but that Paragon of American Virtue and Keeper of the Highest Journalistic Standards, Tucker Carlson, has forced my hand.

For those of you who managed to avoid this week’s Recent Media Imbroglio engulfing Tucker because you were either vacationing on the dark side of the moon (with or without Pink Floyd) or living at the bottom of the Marianas Trench, Herr Carlson denigrated Iraqis—and by extension all Arabs—as being dirty primitive people because they don’t use toilet paper.

I beg to differ, Tuckle-Buck. And having spent many, many months in a variety of Arab countries—including my current five-week stint in Qatar—I know a thing or two about Arab toilet habits.

Let me just lay it out there—toilet paper is nasty.

There I said it. And I just checked my travel wallet—my US passport has not vaporized. Although admittedly I was worried enough to check.

More specifically, 100% reliance upon dry toilet paper for one’s, shall we say delicately, toileting hygiene is kinda nasty. “What?!? Blasphemy!!!” I hear you say. Stay with me, because I know stuff.

Datapoint: I’ve been in a swell 5-star Mövenpick Hotel (I love typing German vowels) in Doha for over a month and I’m still on my first roll of toilet paper. This is because I have had a fully equipped Arab-style bathroom. 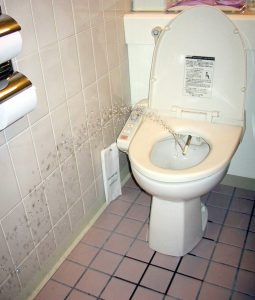 You see, every Arab bathroom comes equipped with a toilet of some description—more on that below—AND some source of clean, pressurized water attached to or adjoining said toilet. Generally, this consists of a sprayer attachment, just like the one built into your kitchen sink for spraying dishes. And if it’s good enough for your Le Creuset cassoulet, it’s good enough for my tush.

The procedure is quite straightforward, really. After completing your business, you give yourself a good dousing with the sprayer—quite refreshing, actually—then you take a few squares of toilet paper and pat yourself dry. Then—I know this will freak out many of you—you toss the TP in the flip-top covered wastebasket next to the toilet. Yep, easy on the plumbing, too.

It’s really more hygienic and, well, you feel sort of renewed afterwards. The trick is to make that first trembling step over the threshold of your culturally programmed habits acquired over a lifetime. Not an easy leap, admittedly. But consider it akin to sampling the local cuisine while abroad or trying the local booze. It’s an experience to be embraced.

My wife, Kay-Kay, and I christened the spray-water system the “butt blaster.” Because I’m a writer and it’s alliterative. Also a little amusing.

Having traveled to 75 countries and lived for an extended period in three, let me assure you that the Dry Toilet Paper Method is almost exclusively an Anglo-American phenomenon. Well, Ireland, too, and this being St. Patrick’s Day, I will not stoop to including the Irish in anything beginning with “Anglo.” 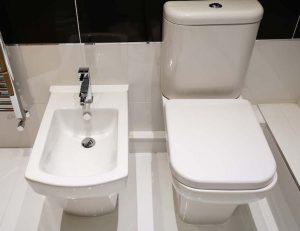 Most other European countries have a more elaborate system, which those of you who have traveled to Rome or Paris have stared at with no small amount of confusion. I refer, of course, to the bidet. That squat little porcelain thingy that looks like a gene-splicing experiment between a toilet and a hand sink. We Americans are terribly puzzled by these, but they are Euro-standard. A friend of mine was married to an Italian who was raised in one of the poorer parts of the Mezzogiorno, outside of Naples. He spent the first six years of his life being bathed in a bidet, his family’s modest home not having a bathtub. But raised in America, we don’t naturally have the muscle memory for the squat-and-wash needed to use a bidet. Although I’m sure it’s great for your core and gives you Buns of Steel over the long run.

Which brings us inexorably to the subject of toilets. With apologies.

Much of the world, over the four decades of my wanderings, has moved to some variation of the standard raised-seat toilet with which we Yanks are accustomed, albeit generally a less capacious height and diameter. Which probably says more about the diameter of the median American derriere than it does about hydrologic engineering.

One still encounters from time to time a more ancient form of toilet, as I have a few times even here in über-affluent (ahh, the German vowels) Qatar. Which is a small desert nation sitting atop an enormous bubble of natural gas. This plumbing fixture doesn’t really have a generally accepted name in English, so let me describe. 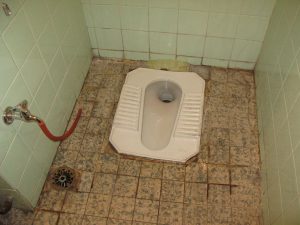 Visualize the square porcelain floor pan you’re used to seeing in some shower stalls. Now, add two big raised footprints molded into it with an open drain hole right between them. That’s it. The footprints are always conveniently textured to avoid slippage in wet conditions. When we lived in Italy for three years while I was in the Air Force, the American community referred to these by many monikers, including the Squat Pot. The fighter pilot general I worked for called it The Bombsight, which I always admired. But they invariably came equipped with the aforementioned butt-blaster spray hose.

The skill needed to successfully navigate a Squat Pot is not to be gainsaid. Let me illustrate with the story of my own first encounter. I shall endeavor to be delicate.

My first go at a Bombsight toilet occurred while I was a college student during my Junior Year Abroad in Scotland. The only more memorable event during this year was meeting Kay-Kay and convincing her I was worth a chance. Over Christmas break—Kay-Kay was off wandering England with a friend of hers—I decided it was time for my first look at Paris.

My very first day in the City of Lights, I joined up with some English guys with whom I was sharing a room in a youth hostel for a foot tour of the city. Having already been there, my English colleagues thought this would best be accomplished by drinking from café to café. And who was I to say no? Not a bad introduction to Paris, really—“Oh, there’s the Arc de Triomphe—drinks, anyone?” 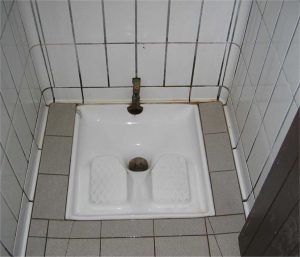 We were sitting in a café—sadly now gone—tucked into the corner of the square in front of Notre-Dame when la Nature called to me. Making my way to Les Hommes, I was confronted with a single enclosed stall which, upon entering, I discovered was equipped with a Bombsight. Let us keep in mind that I was Many Glasses of Vin Ordinaire into the afternoon and not as steady as I might have wished, given the challenging circumstances.

Necessity being the mother of invention, I gave it a go, extremely grateful for those corrugated footprints in my wobbly state. Sparing you the sordid details, It Did Not Go Well. Suffice it to say that I ended up attempting to dry my jeans, having been scrubbed clumsily in a tiny hand sink, under one of those Euro-strength hand dryers that produce as much air current as a 90-year-old blowing out birthday candles. However, I was wearing a sweater, which I removed and knotted around my waist to cover my Yankee Ineptitude With Toileting. However, I learned my lesson.

So to Monsieur Carlson, I say vive la difference!

Any interesting toilet encounters you’d care to share? Please leave in comments below. With delicacy.