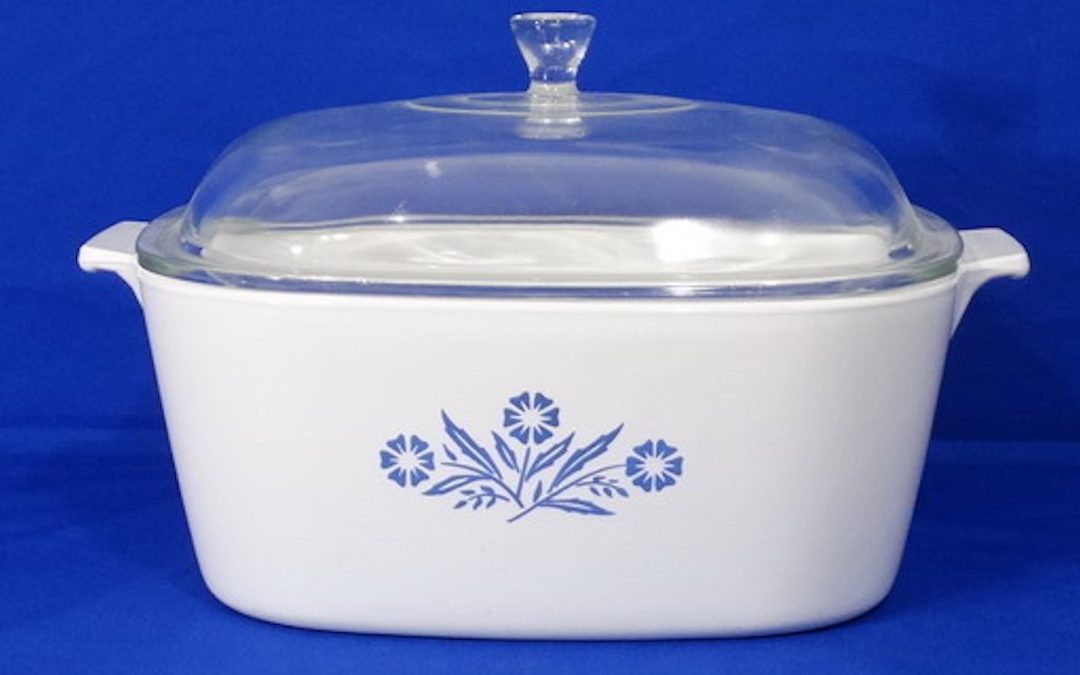 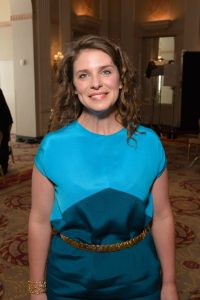 Kay-Kay and I have been stream-bingeing A Chef’s Life. This is an endearingly quirky series on PBS about Vivian Howard, the daughter of a tobacco farmer from eastern North Carolina who, after meeting her Jewish husband from Chicago while working at a restaurant in New York City, is enticed/bribed back to North Carolina by her parents’ offer to bankroll her own restaurant on the sole condition she open it in her hometown of Kinston. Population 20,923. As I said, quirky—but Vivian definitely grows on you.

Part of each episode of A Chef’s Life is Vivian reminiscing about her grandmothers’ and her mother’s cooking, all with a penchant for tubs of lard and Wonder bread. All this binge watching got me thinking about the food we ate while I was growing up back in Skeeterville, too. 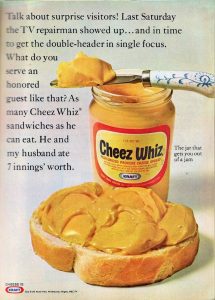 Since she’s still alive and pushing 90, I’m going to be kind and say that my mother’s cooking was never going to win any blue ribbons at the county fair. I can still name the six-night rotation of main dishes (with alternating chicken and roast beef on Sundays) that we had every single week while I was growing up. It would take too long to describe all these dishes, so let one suffice. This dish—usually the Wednesday special—had no name. Its main feature was one of those Corning Ware “blue cornflower” 4-quart casserole dishes, into which went 1 (one) can of sauerkraut, topped by 1 (one) package of 8 (eight) Oscar Mayer hot dogs (the pre-“healthy lifestyle” kind made with pig entrails, chicken feet, and big chunks of sodium), then layered with a lot of lumpy mashed potatoes to seal the casserole, all topped by an entire jar of Cheez Whiz. Then heat in a 325 oven until… well, I’m not entirely sure how long, since you can actually melt Cheez Whiz by staring at it really hard.

A few comments on the Wednesday Dish… oh wait, it was the TUESDAY Dish. The Wednesday Dish was always a boxed Chef Boyardee Complete Spaghetti Dinner with Meat Sauce which Mom “fancied up” by stirring the can of Meat Sauce into a pound of undrained browned ground chuck, which was then mixed with the conveniently packaged and woefully overcooked pasta, then tossed in the aforementioned 4-quart Corning Ware casserole. That thing sure got a lot of mileage.

But back to the Tuesday Dish. In hindsight, this casserole probably had the entire Recommended Yearly Allowance of salt, but I blush to admit that I LOVED it. And who didn’t love Cheez Whiz—let’s be honest here, OK? But please, do not confuse Cheez Whiz—which came in a jar—the use of which my Mom referred to as “glopping some cheese on top”—and the spray-on Easy Cheese, that came along only in 1965. Although Easy Cheese was friggin’ awesome, too.

OK, so maybe not as kind as I’d originally intended vis á vis Mom’s cooking. But as she still says to this day when we give her a hard time about it, “None of you starved.”

When I hit junior high, I started getting invited to stay for dinner when I was hanging out at friends’ houses, so it was only at age 13 or 14 that I had my gourmand moment: “Hey, this food is actually rather good.” That epiphany led me to change my after-school television viewing from an exclusive diet of Gilligan’s Island, I Dream of Jeannie, and Flintstones reruns to our local public broadcasting station, WTTW, and its cooking shows. 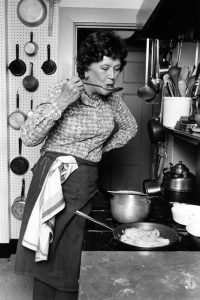 For those of you under the age of 40, you may not realize that the whole Food Network, celebrity chef, 24/7 cooking show universe is a recent phenomenon in The Big Scheme of Things. In the early 1970’s, the only place you found any cooking shows—and there were not  many—was on PBS, right after Sesame Street ended or on Saturday morning. And this was when I first encountered one of the most important women in my life… Julia Child.

Long before she was Meryl Streep, she was a phenom! A force of nature! A shifter of paradigms! And she was funny as hell, too. Now, it wasn’t like I was actually trying to cook the dishes she demonstrated on The French Chef. It wouldn’t have been possible. Did I mention that while I was growing up we never—not one single time—ever had an onion or a pepper in our house? Not exactly the place to make sole meuniere. What Julia did was introduce me to the consumption of food porn—I became addicted to watching great food being cooked, which made haute cuisine seem somehow normal to me.

There were a couple of other cooking shows on PBS as well, but they couldn’t touch the Divine Julia. One was The Galloping Gourmet starring this goofy English guy named Graham Kerr. He went off the air because he appeared to get soused on wine each and every show. I’m guessing he had to go dry out. And then there was The Frugal Gourmet. I never really warmed up to that show, which may or may not have been because the star was later accused of sexually molesting a half-dozen teenage boys. (He was never charged and he settled civil lawsuits with all of them, so who knows?)

During my junior year at Skeeterville High, Something Very Fortuitous occurred. Our school district lifted the gender exclusions on Home Economics and Industrial Arts (OK, “Shop”) classes. A male friend of mine stumbled upon the genius deduction that a) not many guys would take up this opportunity, it being the unenlightened year 1977, and b) the class would otherwise fill with females of the species, ergo c) we should take a Home Ec cooking class from which we would Get Many Dates. As I said, genius—that guy was a true pioneer.

Thereafter, I spent 14 weeks, five days a week, one hour a day in a big room with six kitchens, populated by three men and 21 women. This was, I would later learn in the Air Force, called “a target-rich environment.” But besides a lot of dates, that Home Ec class also gave me a great grounding in the craft of cooking. Since I was the youngest in the family, Mom was more than happy to surrender part of her cooking and shopping duties, so I started preparing some meals at home. 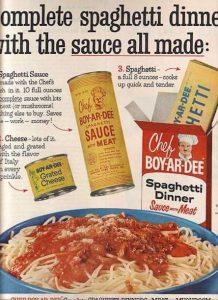 Once given the keys to the kitchen, my very first act was to banish Chef Boyardee and his repulsive box o’ spaghetti. I had learned in Home Ec how to make spaghetti sauce from scratch, utilizing exotic ingredients like Yellow Onions and Crushed Tomatoes. And I had also learned what al dente meant in reference to pasta. So Wednesday night was my night.

Curiously, my father hated it. Of course, he couldn’t actually taste anything, since he lived on little more than 8-10 cups of acidy coffee and 3-4 packs of cigarettes each day. Did I mention he died two weeks shy of his 63rd birthday? I think we know which way the causation arrow points in his case.

Luckily, I married a woman who was both a good cook and endlessly curious when it came to food. We agreed when our daughter Peanut was born that our kids would grow up exposed to all variety of foods. Full confession. We did feed our kids Kraft Macaroni and Cheese—didn’t everybody?—and it took us years to convince them that day-glo orange is not a real cheese color. But we taught them to love great food, too. More importantly, we made them comfortable in the kitchen. And that’s really what you most need to cook good food, isn’t it?