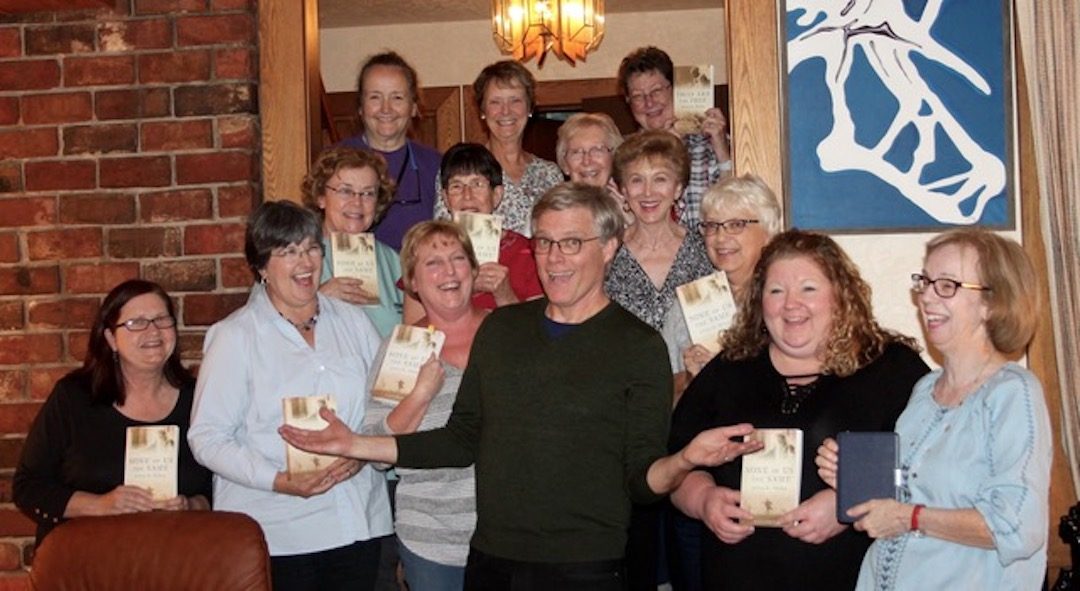 I can’t hold a job. More accurately, I can’t stick with a career. Well, at least not like Dad did. I mean, he only had one career. I’m on Number Nine, and three of those after age 50.

We subconsciously use our parents as our default yardstick with which to measure our lives. It must be a thing, since we’re bombarded with “Will this generation do worse than their parents?!?” We’ve been hearing some variation on that jeremiad since the ’80s. By which I mean the 1880s. Maybe the 1780s.

My dad was a little horrified at my inability to stick to one career. He’d have freaked over how many careers I’ve had after 50. His path was profoundly different.

The Way Jobs Used to Be

My father had two jobs in his entire life. A few weeks after he graduated high school, he started Job #1. This came with a natty green uniform, three hots, and a cot. Not that Dad had much say in the matter, what with it being the last 15 months of the Second World War.

When my father was discharged, he returned to Skeeterville and went to work for the company his father had started during the war. Keep in mind anybody who could screw Nut A onto Bolt B for Uncle Sammy made money during The Big One. Grandpa actually started his company in 1943 while working as plant manager for another company running full tilt with war production.

And that’s where Dad stayed for 37 years. He managed to retire at 57, which is not too shabby. No need for a new career after 50 for the old man. Then he smoked and drank himself to death four years later. So there’s that. But point taken, yes? He spent his entire working life with one employer. And this is what we Baby Boomers assumed was The Natural Way of Things.

It didn’t exactly work out that way for me. 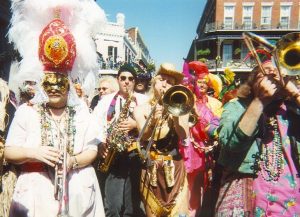 When I graduated from Tulane—and bid a reluctant adieu to Nyah’luns—I fulfilled everyone’s misguided expectations by becoming an aspiring young stockbroker. Yep, as that immortal bluegrass bard and weed smoker, John Hartford, said, “They sold me a suit and they cut off my hair/And sent me to work in Tall Buildings.”

This lasted about three nanoseconds. I got through a couple of months of training that prepared me for the New York Stock Exchange’s Series 7 examination. This is why I still understand calls and puts, straddles and strangles. But in reality, this was a salesman gig and I’m not good at feigning interest while getting people to fork over their Hard-Earned Money.

So wallowing in my misery—did I mention I got married and impregnated my wife, too?—I happened to pass an Air Force recruiting office. I thought to myself, “Self, what’s the opposite job to stockbroker?” In my tenuous mental state, I answered aloud, “Why Self, I believe that would be flying Very Large Airplanes at Very High Speed and Very Close to the Ground whilst Very Angry People shoot things at you.”

So there you have it—problem solved and thus ended Career #1. I signed on the dotted line and headed off to Officer’s Training and Navigator School, emerging a year later as a newly minted B-52 bomber navigator.

Although I remained 20 years, I actually had a couple of careers within the Air Force. After six years on the aviators’ Island of Lost Boys, I decided to grow up. That and the fact a flight surgeon grounded me, which Sucked Out Loud. I really, really liked flying airplanes (death of Career #2). But the Air Force made up for this crushing disappointment by sending me off to law school. This came with all expenses paid and with a captain’s salary. And gave me three years at Georgetown (birth of Career #3). 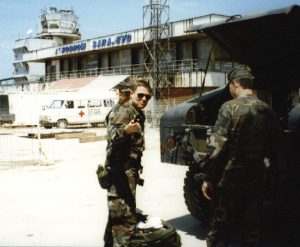 Over the next 14 years, I did various kinds of prosecutorial and international law stuff, which was an exhausting but way-cool gig. I retired from said Air Force at the earliest possible moment that came with a lifetime pension. Seriously, I entered the Air Force on the 5th of July 1983 and asked to retire on the 4th of July 2003. It seemed kind of poetic. But the Department of Defense likes to round things off and only lets you retire on the first of the month. So 1 August 2003 was the date the curtain came down on Career #3. I thereafter began getting paid for continuing to breathe in and breathe out. Pensions sure are sweet.

I was 43 with one kid in college and two en route, so retired retirement wasn’t on the cards. Not having a clue what to do next, I accepted an offer from a guy I’d served with in Europe to start our own consulting company. We sold back to the Department of Defense all the training and education they’d paid so dearly to give us while in uniform. (This initiated Career #4). Again, sweet. I suppose this was my first new career after 40, still several years short of 50.

The company expanded a lot faster than we’d guessed it would. This also presented a problem, since I’d thought I could work part-time for the company while doing a PhD back at Georgetown. Yeah, that didn’t happen. So after toughing it out for a year, I withdrew from the Georgetown PhD program. The Government Department immediately asked me to be a Lecturer and a Senior Fellow in some new center they’d launched. (This both ended putative Career #5 and launched Career #6 in part-time professor-ing. Karma can be one funny lady.) 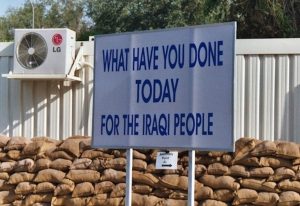 I ran the international practice group of my company for seven years. Then I got That Itch and sold my shares back to my partners. Another gig bit the dust—Career #4 was no more. I did get a respectable bag of money on the way out the door however. I knocked around Ireland for a month with Kay-Kay, then took a three-month consulting gig… in Jamaica. (Karma really is hilarious. I mean, she kills it sometimes.) 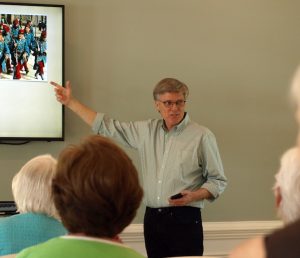 After that hardship assignment, I accepted a job teaching law and running international programs at a law school in NYC. It took me about 15 minutes to agree. Oh, who am I kidding? It took me about 15 seconds to say yes to Career #7. So with all the kiddies grown and gone and having just turned 52, Kay-Kay and I packed it up for The Apple. An adventure! This was, chronologically speaking at least, my first career after 50. But we’re only as old as we feel.

Yeah, that. Loved the teaching, my students, the international programs. Hated—and I mean with the intensity of a thousand burning suns HATED—New York City. After less than five years of trying to convince ourselves how cool it was to live in New York, Kay-Kay finally looked at me and said, “This really stinks. Let’s go back to Virginia, whaddayasay?” You see, we’d been in NYC so long we’d started saying things like “whaddayasay” and “fuggedaboutit.” This was profoundly frightening. We left skid marks. Thus expired Career #7 at the uncomfortable age of 56. 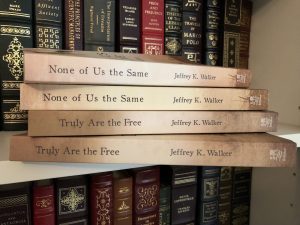 Back in Virginia, having paid off all our debts and in full ownership of our house, vehicles, and a new a/c system, Kay-Kay said, “Hey, why don’t you take a year off and write that book you’ve been whining about doing since Reagan was president?” This sounded a lot like Career #8, so I enthusiastically accepted. In that year of full-time writing, I managed to produce all of one and most of a second book.  I’m told they’re fairly decent novels. I discovered I both love Career #8 as a writer and am pretty good at it. Which is a nice coincidence. This also marks the second of my careers after 50.

Of course, I haven’t hit the big time with my writing yet, but I’m hopeful Karma still has a few yucks up her sleeve. I’ve settled into a decidedly quirky melange of a Career #9. I’m still writing—my third novel came out in September. I’m 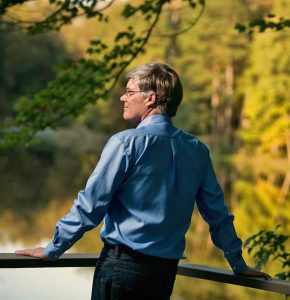 also doing a fair amount of lawyer work for a new company started by some old colleagues. It pays a lot better by the hour than my writing, to be sure. I’ve also done part-time teaching, which fills a void from my days as a law professor. Kay-Kay does all the editing, marketing, and business management for the publishing division of The Family Enterprise. We genuinely enjoy working together. It’s a little chaotic sometimes. Nevertheless, it gives us a lot of freedom to work from anywhere in the world—including nearer our grandkids—and we make it work.

I’ll write more about the nuts and bolts of Career Changes after 50 in some subsequent posts, in particular jumping into The Writer’s Life. AARP says there are 100 million of us Americans over age 50 and 12% of us say we’d like to write a book. Let’s talk about that later, okay?

[This blog was first posted in June 2019. I’m currently on a cross-country drive to California and will be back with new posts from the Left Coast next week.]