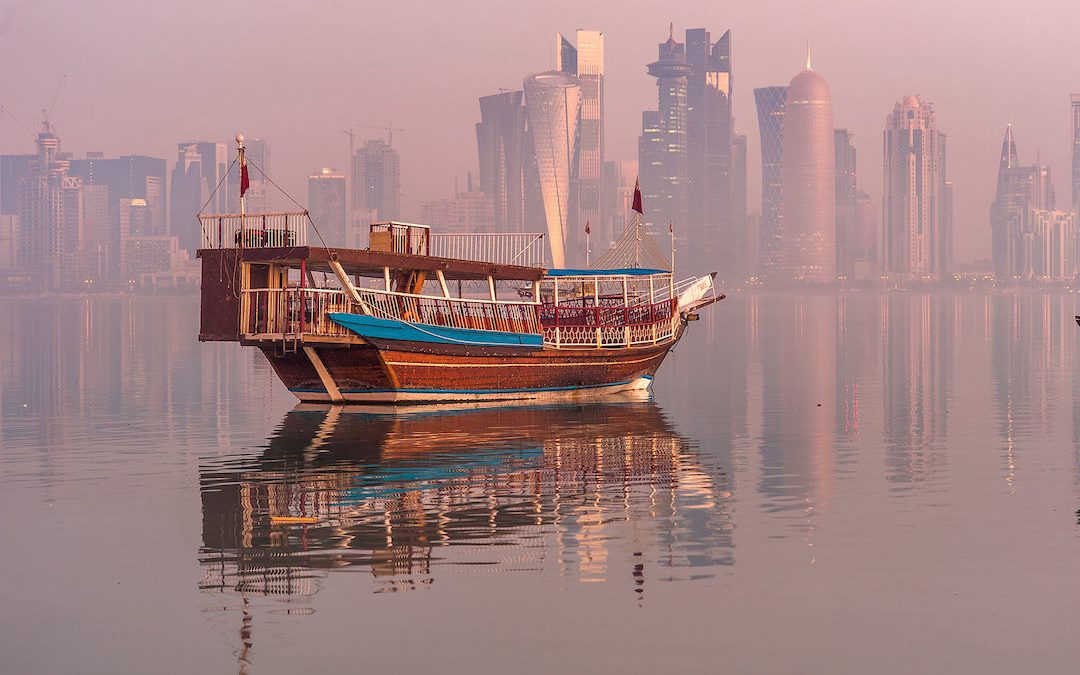 Sabah al kheir, habibi! Al salaam alaikum! (And that exhausts fully two-thirds of my Arabic vocabulary.) I’m on my first international biz trip since before Our Current Viral Unpleasantness. Back in Doha, Qatar, a great place where I spent six week sin 2109. So here’s an updated version of a blog from the road I posted almost three years ago.

Qatar has a very nifty COVID tracker–EHTERAZ–you have to download before you leave the airport after completing your COVIDian interrogation and producing many digital documents. You have to flash your green EHTERAZ QR code in order to get in anywhere. I am a Proud Greenie!

This is a trip I’m undertaking for The Day Job, that bane of all creative artists everywhere throughout the ages. “Why must we need money?!? Why can we not just write and live on our beautiful words?!?!?” Yeah, try presenting a chapter or two at the Costco checkout for that 48-count case of ramen noodles. 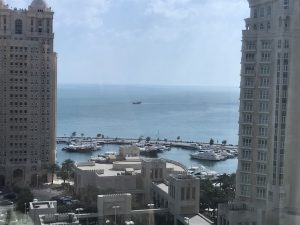 Could be worse. I’m sitting at the desk in my hotel room on the 6th floor of the Hilton, gazing out the window at a panoramic view of the Persian Gulf. Oops, I’ve been corrected several times here—the Arabian Gulf. Because everything is political, here as well as everywhere. And, well, “Persians” are Iranians and they’re The Bad Guys, whereas Arabs are The Good Guys. Although I’m sure the Iranians have somewhat different views on this matter. Whatevs. We Yanks don’t have too big a dog in this particular hunt. For the moment.

The days are generally long and exhausting. For those of you who have done substantial business travel in far-flung places, you know what I’m talking about. For those who have not, let me elucidate.

Doha, Qatar, is eight time zones later than the East Coast of the US of A. What is the length of the standard American work day? “In a perfect world, it’s eight hours,” I hear you say. Eight time zones, eight-hour workday. Hmmm. That is an unhappy coincidence for me. You see, I work a regular eight-hour day here in Doha and, just as I’m finishing up here, my American colleagues are arriving at work where they will commence writing emails and making phone calls to me with a cavalier attitude toward the Actual Time of Day anywhere else. Like in Doha.

So I get to start my second shift—which ends around midnight local time here. A few days ago, a colleague in the States called me at 1:45 AM here to tell me something I’d already heard nine hours earlier. You get the idea—and I get a lot of espresso.

World Cup, All the Time 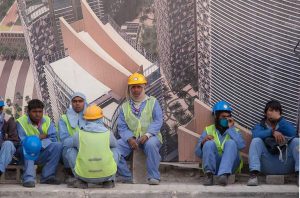 There is one thing that looms largest in the daily consciousness of everyone here in Doha—World Cup 2022. It’s going to be here in Qatar, a country roughly the size of Delaware. And they have built or are building EIGHT professional-sized soccer stadiums. Also all the highways, hotels, restaurants and shopping malls that a country of 2.6 million need to host basically the entire world. They even opened a shiny new three-line subway system. The safety video on Qatar Air is a tongue-in-cheek done by four soccer players. It’s. all. about. the. World. Cup.

Hard to imagine the sense of deflation and letdown people are going to feel here when the Coppa Mondiale is presented to some fortunate nation in 2022. Oh, who are we kidding—90% chance it’ll be Brazil or Germany. And the world will depart, leaving the tiny nation of Qatar with enough 40,000-seat stadiums to donate one to each high school. Almost. Oh, and a gazillion cubic meters of natural gas to keep their per capita GDP the highest on Earth. So don’t cry for them, Argentina. Because you have almost no chance of winning the World Cup up here anyway. 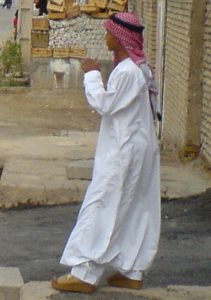 Funny thing I discovered about Qatar. There are surprisingly few… Qataris. Of the advertised current population of 2.6 millions, give or take a few hundred thousand Nepali stadium construction workers, actual Qatari citizens comprise 350,000. “Qatari” is the fifth most common ethnicity within… Qatar.

Some days, you can be out and about for hours and never spot an obvious Qatari. Generally, the guys wear a white kaftan and a white keffiyeh, with the fashion option of wearing one of those Yasser Arafat red-and-white checked ones if you’re feeling a little madcap.

The Qatari women mostly wear abayas—the long black wraps—although they do so rather lightly. I’ve seen a lot of hair casually protruding and almost no one wears a face veil or gloves like in Saudi Arabia. Younger women are rather easygoing with the whole concept. I’ve been in Starbucks when some younger Qatari women meet up for coffee wearing abayas. As soon as they step inside, they throw them off and plop down, with no concern for what kind of strange men might see them.

So yes, Qatar self-identifies as a conservative Muslim country, but it’s conservatism with a very light touch. Which is a Very Good Idea, given that the natives are outnumbered 8-to-1 by the foreign expats.

Weather Is a Thing Here

The weather has been spectacular, almost boring in its persistent gorgeousness. 80s and sunny during the day, a light breeze off the Persian/Arabian Gulf, cooler and clear nights. Whenever I mention this to People Who Live Here, their response is always, “Enjoy it while it lasts!” You see, like most other desert Arab countries, summer day temperatures can climb to 120 degrees. I experienced this while living for a year in Iraq—where people said, like every Arizonan I’ve ever known—“But it’s a dry heat.” Yeah, so’s a pizza oven, but point taken.

Qatar, however, juts serenely into the Persian/Arabian Gulf. Which necessitates being surrounded by water. The result being, I am assured, that they are treated to not only 120-degree heat, but simultaneous 90% summer humidity. Yikes. One Croatian lady I’ve been working with here who’s a long-time resident said when the weather is like that, you open the door and take a breath before exiting, “to ensure the air is breathable.” Double yikes.

The good news for me is I will be well away before the heat begins, since I’m wheels up on Saturday, a months ahead of the earliest of the hot weather. I hope. Global climate change allowing.

Another random observation. This is a white carnation. Oops, I mean a white car nation. Fully 80% of all vehicles here are white. Of the remainder, half are silver. So about 10% of the cars here sport all the other colors of vehicles you can get standard from a car manufacturer. The reason for this is partly aesthetic—dark colors, especially black, show dirt and dust very readily and desert nations end to be dusty. But the bigger reason is the aforementioned 125-degree temperatures in summer and the constant blazing sun that goes with it. White and silver reflect sunlight—Dakota Brown and Lunar Blue Metallic, not so much.

I have a white rental car. One must always note ones parking spot with great specificity. Otherwise, it would be like forgetting whether you parked in Goofy or Dumbo or Grumpy at Disney World. 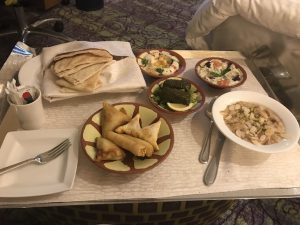 I am, blessedly, a devotee of Middle Eastern cuisine, especially the Lebanese variety which has become somewhat standard across the region. There are two foodstuffs I seriously look forward to whenever I travel in this region. First, lebneh. This is the Lebanese take on crème fraîche—that French stuff halfway between sour cream and cream cheese. But lebneh is made from unicorn’s milk. Well, it must be because it’s so much creamier and richer and all-around more delicious than that inferior French stuff. I would spread lebneh on poker chips or index cards and eat it, I swear to Allah.

Second is an Egyptian dish called Umm Ali—roughly translated as “Ali’s mommy.” This is universal comfort food, basically an Egyptian take on bread pudding, made with day-old pita, almonds, subtle exotic sweet spices, and that unicorn’s milk. I’m almost sure. I’m like a naughty three-year-old around Umm Ali in that I will hip-check actual three-year-olds away from the buffet so I can get to the Umm Ali first.