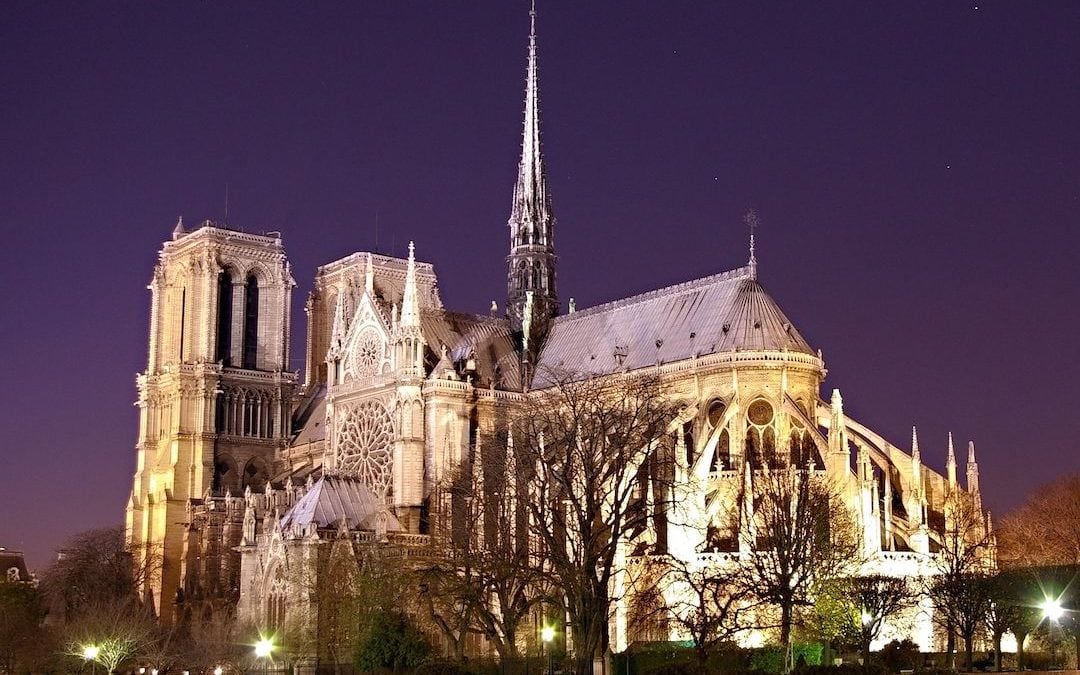 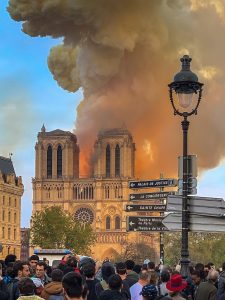 It had for most of us the shocking suddenness of an assassination, and in a way that’s what it was. The sight of flames tearing through the roof with savage orange fingers and illuminating the irreplaceable windows of Notre Dame with their sinister hellish glow was an emotional gut punch to everyone who has ever walked the aisles of that incomparable place. Or to those who have achingly dreamed, as a young me once did, of one day, maybe one day, seeing Paris and her iconic cathedral in person.

It’s some comfort, I suppose, that by the day after we were able to collectively half-exhale and say, “It could’ve been so much worse” or “At least the bell towers still stand” or “Most of the stained glass remains.” But there can be no doubt that we’ve lost much and came frighteningly close to losing it all.

I have a personal history with the Old Lady. I first laid eyes on her knocking around Paris for the first time back in late 1980 with some English guys I’d met in a youth hostel over behind the Louvre. We’d drank our way across the city swilling cheap vin ordinaire at a succession of alternately quaint and grungy cafés. We rounded a corner and before stepping into another watering hole, one of the Brits nonchalantly said, “Oh, there’s Notre Dame.” It was a drizzly grey winter day and she seemed to blend into the greyness. All except the huge rose window over the west entrance that faces the square. Enough lights were on inside that the deep crimsons and lustrous blues produced only by medieval glassmakers glowed in the dreariness. I was hooked—she had me at bonjour. 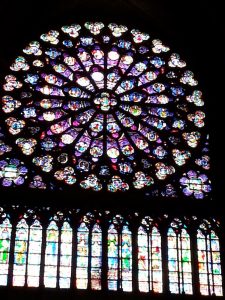 I returned a few months later with my then-girlfriend, now long-suffering wife, Kay-Kay. We spent most of a lazy afternoon inside Notre Dame. I’ve had a fascination with stained glass since my days as an altar boy when I had the chance to study up close the windows in my old parish church. Altar boys had free range of the church for ostensibly official business. A few of us assumed that included the stash of sacramental wine in the sacristy as well as the pastor’s cigars, with predictably unfortunate results. I took advantage of the opportunity to check out whatever windows I could safely reach in detail. I was that rarest of 11-year-old boys—a stained-glass geek. In my defense, the first video game would not appear for two more years.

The glass in my home parish I now know was quite awful stuff, created at the nadir of the art that gave us truly mediocre late-Victorian, mass produced, stained glass made with sallow, pallid, insipid, industrial dyes. Two dimensional cartoons at best. Not like the great Gothic cathedrals with their thick, irregular, lushly colored glass made with formulas and methods long forgotten and impossible to reproduce with accuracy in our own day. Notre Dame had—and thankfully still has—a lot of stunning medieval glass. And I’ve gazed into much of it for a very long time indeed.

I’ve been back to Notre Dame many times on subsequent visits to Paris since those first glimpses as a college student. It was a rare and wonderful feeling to bring my children there, although they were ages 7 to 12, so I’m not entirely sure how impressed/bored they were. The street corner crêpe stands were a much bigger attraction to them, but at least I felt I’d done an Important Parental Thing. Kay-Kay had to yank me away from my window gawking once the kids got too antsy. 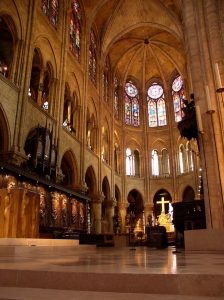 During my unimpressive five-year stint as a law professor, Kay-Kay and I spent five weeks in Paris while I supervised a summer session at the university’s Paris study center. We had the utter luxury of popping into Notre Dame whenever we wandered up the Left Bank and over to the Île de la Cité. Just nip in for a quick look around, a little more interminable window-staring for me. I even did an “Introduction to Canon Law” lecture for my Legal History class walking around inside Notre Dame. That was about as cool as it gets for a legal historian.

I know how fortunate I am to have lost track of the times I’ve been to Notre Dame. And I’m certain I’ll be back again, if the fates are kind.

There’ll be no lack of money to rebuild in whatever way the French government and the Archbishop of Paris decide. Some eye-popping donations have already been pledged by Very Rich French Guys. But France being filled with French people, that in itself has generated controversy. The fact that a single Frenchman—in this case, Bernard Arnault, maker of fine champagne and overpriced luggage who moonlights as the richest man in Europe—could immediately write a cheque for €200 million kinda rankled all those gilets jaunes protesters who have been screaming—and occasionally rioting—in the streets for months about income inequality.

It isn’t as if Notre Dame hasn’t had some significant—and often ill-advised—remodeling done over the past 800 years. Louis XIV pulled out some of the medieval windows and replaced them with clear glass, seeking to Baroque up the place a little. She suffered damage during various riots and revolutions. By the time Victor Hugo published his Hunchback of Notre Dame in 1831, the eponymous cathedral was more or less a rundown dump. The best-selling novel is credited with bringing back Notre Dame as both an important architectural place and a beloved national symbol. So she’ll survive this latest insult, too.

Of course, the question of exactly how Notre Dame should be rebuilt will become a national spectator sport in France. We’re talking about a scenario that requires consensus on a highly emotional issue combining history, art, architecture, religion, national icons, and Paris—all to be decided by, well, French people. This ought to be good. I can’t get the image of herding cats out of my brain for some reason. 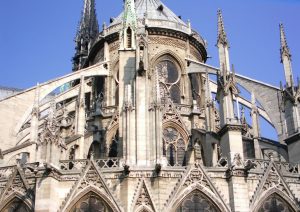 Some say that giving money to rebuild Notre Dame—which me and Kay-Kay will surely do in our own small way—is immoral when children are starving in Yemen and Puerto Rico still hasn’t recovered and, and, and… These are, of course, all human tragedies and all worthy of charitable donations and efforts. But criticizing giving to Notre Dame suggests a false binary choice. We should seek to end suffering and save treasures everywhere. That Notre Dame is given priority by so many doesn’t diminish the need elsewhere that should not and cannot be ignored.

But these critics raise an interesting question for me. What is it about Notre Dame that makes it so special to so many? I know now there are better examples of medieval stained glass elsewhere, including the Sainte-Chappelle very near the cathedral. There are more grandly soaring ceilings and finer flying buttresses on other cathedrals, too. But Notre Dame, presiding in the heart of the most beautiful city in the world, remains very special to me and hundreds of millions of others. Watching her burn was heartbreaking and reduced all of us to tears.

I think it’s a combination of three things. First, the solidity and seeming permanence of Notre Dame. We find comforting the notion that some things wrought by the minds and hands of humans who came long before us and are destined to remain long after our lamentably short time on Earth is done. 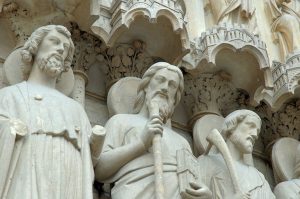 Second, Notre Dame marries in one tangible place the Platonic transcendental ideals of truth and beauty and goodness. Like so much else in Christian theology, that unabashed Platonist St. Paul imported these ideals into Christian thought. A Gothic cathedral like Notre Dame represents a clear physical manifestation of these ideals—the truth found in the architectural science that produced the structure itself, the beauty of the many arts—glassmaking, sculpture, painting, woodworking, weaving, stonecutting—that contributed to the fabric of the cathedral, and goodness found in the supreme faith of those who created the cathedral solely for the glory of God.

Third, regardless of your religious belief or lack thereof, that so many toiled for so long (150 years to finish Notre Dame) to produce something of such incomparable beauty bears resounding witness to what the collective human spirit, despite our many and frequent failings, is capable of achieving.