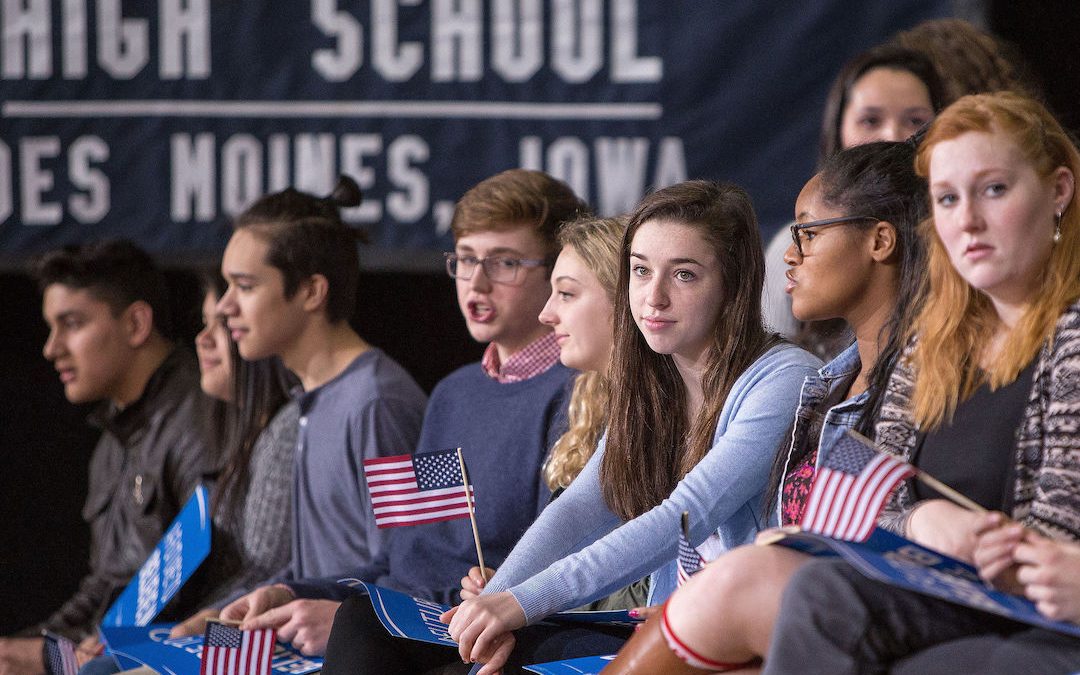 As I was just out of the shower yesterday, my wife, Kay-Kay, said, “Hand me a roll of toilet paper from the closet, please.” My immediate response was, of course, “You need TP for your bunghole??? Heh. Heh, heh.” Which is hilarious if you were ever, like me, a devoted fan of “Beavis and Butthead.” Seriously, it kills.

For non-fans like Kay-Kay, not so much. She just wanted some toilet paper. 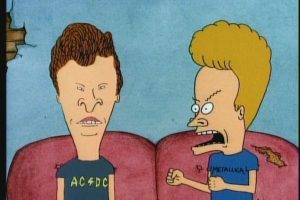 However, this innocuous bit of repartee set me, like Marcel Proust, in search of lost times. Specifically, calling to mind my German son, Fritz. “Gasp!” I hear you, well, gasp. He’s not my biological son, as far as I know. But we think of him as unser ältester Sohn, which Google Translate tells me means “our oldest son.” And old he is, now being north of forty. The connect-the-dots here is that Fritz and I bonded over weeknightly viewing of “Beavis and Butthead” while he lived with us as an exchange student in Wyoming.

It was only a few years ago that I discovered how much this damaged my Actual Oldest Son, Scooter, who was eight years old when Fritz lived with us. Blurting out his long pent-up trauma over the canned cranberries a few Thanksgivings ago, turns out Scooter, who was always rather precocious for his age, used to lay in bed seething because he wasn’t allowed to join in the hilarious laughter filtering up from our family room Monday through Friday. I’m truly sorry I did such irreparable harm to poor Scooter, although it hasn’t resulted in him being convicted of any felonies. Yet. But this inexcusable act of parental neglect should be offset against the Arguably Better Parenting Choice of not allowing an 8-year-old to watch “Beavis and Butthead.” 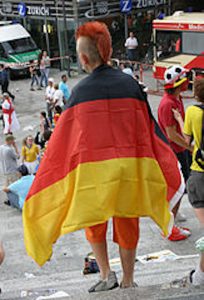 I’ve discussed Fritz here before in regard to his Typically German Attitude toward all things der Fußall. Meaning soccer, but I used the German word because it conjures up a Foosball table with those shish-kebabed players that look like little crash-test dummies. Also because I’ve now checked off my bucket list “using that funny ß thingy in a public place.” Technically, this substitutes for two letters S/s and is called an Eszett. A disappointingly short label, given that the German word for “title insurance company” is 39 letters long. Really—Rechtsschutzversicherungsgesellschaften. Look it up.

So when young Fritz arrived in Cheyenne, Kay-Kay and I were instantly the 33-year-old parents of a teenage boy. <Yikes.> On the other hand, this offered a golden opportunity. We could practice our teenager parenting on a kid we’d get to send back after his expiration date! How sweet a deal was that? I mean, we could completely mess him up, then return him to a country with an excellent national health service that would put things right again. Or this was my thinking at least. Not Kay-Kay’s—“mothering” and all that. 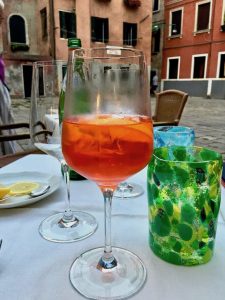 Turns out we got a good deal with Fritz. He got off the airplane speaking better English than I did at 17. Seems he had—and still has—a remarkable skill for languages. His mother was a French teacher, so he came to us with three languages. As an adult, he learned Italian mostly hanging around Roman cafes drinking Aperol spritzes and reading menus.

There was one exception to Fritz’s otherwise inestimable language skills. He couldn’t pronounce an English “v” sound. Weird, right? German has a “v,” after all, although it’s usually pronounced like an “f.” Because German.

We were at first mildly bemused by his “carrots are wegetables” or “I’ll go wacuum my room.” But because his English was otherwise so darn perfect, this little peccadillo started grating on our nerves. It all blew up one day in our kitchen while he was putting some wegetables in the fridge. Blew up with much hilarity, I hasten to add. And it was the ever-patient teacher/mommy Kay-Kay who snapped first. She made him repeat “vegetable” over and over, crying out, “No! VEGETABLE!!!” and slapping his arm every time he got it wrong. Well, not slapping hard or anything—we never smacked any of our kids, borrowed ones included. In the end, this fricative-sound intervention produced a breakthrough. I daresay to this day Fritz never mispronounces an English v-word.

We really did get lucky with Fritz. We’d warned him in advance that he was coming to a household with no other teenagers, our daughter, Peanut, being just 10 and the oldest. We told him they would accept him immediately and the boys would probably crawl all over him and expect him to read to them. He said he was OK with all that and he was good to his word, especially with our littlest boy, Doobie, who adored his brother Fritz and was heartbroken when he left at the end of the year.

It wasn’t all smooth sailing with Fritz. We had an incident in the fall during football season when he got caught by the police with some American buddies drinking in the parking lot. The cops confiscated their liquor, gave them a scare, and sent them on their way. No harm, no foul, really. 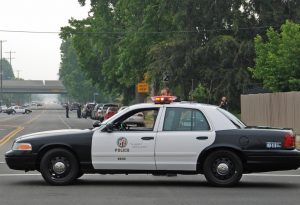 This incident was rather hilarious, in hindsight. I vividly recall standing in our big storage room where Kay-Kay and I were rearranging her teacher stuff when Fritz came home, found us, and immediately confessed his transgression. We knew this was an early test of our newfound Teenager Parenting Skills and we had to make it clear we wouldn’t condone any more shenanigans like this. All the while side-eyeing each other and trying desperately not to burst out laughing. (Note: I was stopped by the Skeeterville Police Department a total of three times in high school, each time a) with contraband alcohol, b) while driving, and c) in varying shades of drunkenness. Kay-Kay plays her high school cards closer to the vest, so I shall not comment on her past sins.)

It occurred to me after this rather minor event that having a Lend-Leased Teenager on a student exchange program gave us one singularly effective stick, carrot or other wegetable—the omnipresent implicit threat of deportation. Magic! Imagine my surprise, my natural-born children having achieved Unbearable Teenager Status, when Kay-Kay informed me that we could not, in fact, deport them to anywhere other than the college campus of their choice. Bummer.

As fate would have it, the year after Fritz returned to Deutschland, Deutschland (über alles), I received orders for Italy. So we got to see him several times over the next three years, stayed with him and his parents in Saarbrücken, and kept in close touch. Then we went back to the States, he went off to university—not uniwersity, thanks to our handiwork— where he excelled in the study of law, and time went by. As is often the case, we fell out of touch for several years.

Kay-Kay, who is possibly the universe’s best letter-and-card writer and keeper-in-touch, decided after too many years that Fritz must be found again. With the Power of The Google, she located his law firm email and heard back from him in time to invite him to daughter Peanut’s upcoming wedding. When he accepted, Peanut asked him to read at the church ceremony. And she didn’t even have to screen the text for errant v’s. 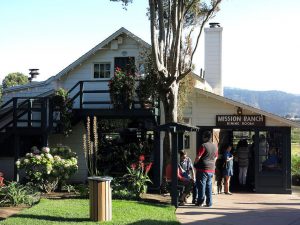 Traveling with his Significant Other whom we’d never met, a delightful and lovely and multilingual law classmate of his, he arrived in Carmel where the wedding was to be held. They pulled into the parking lot of Clint Eastwood’s Mission Ranch, where we were all staying, and a very emotional and prolonged Hug-und-Cry-Fest ensued.

We’ve stayed in touch. Fritz came to Rome to guest lecture my summer session European Legal History course three times. It was, in fact, during one of these trips that his son was conceived—during the World Cup, appropriately enough. We’ve visited his home. We’ve met both his handsome son and beautiful daughter. We adore his Sig Other, too. And he’s now a partner in a Big International Law Firm, which shall remain nameless due to its being a big international law firm and kinda scary.

Yep, a lucky draw with Fritz, which is not to be taken for granted. One of my colleagues also hosted an exchange student that same year… and it Did Not Go Well. Another host family had to deal with their own teenager, supporting a blossoming drug habit and stealing from their exchange student. But sometimes you get dealt lucky cards and can stand pat.

You know, I wonder if my addiction to Random Capitalization is attributable to having a German son? Huh. Maybe I should’ve let him keep the wegetbales and wacuum after all.