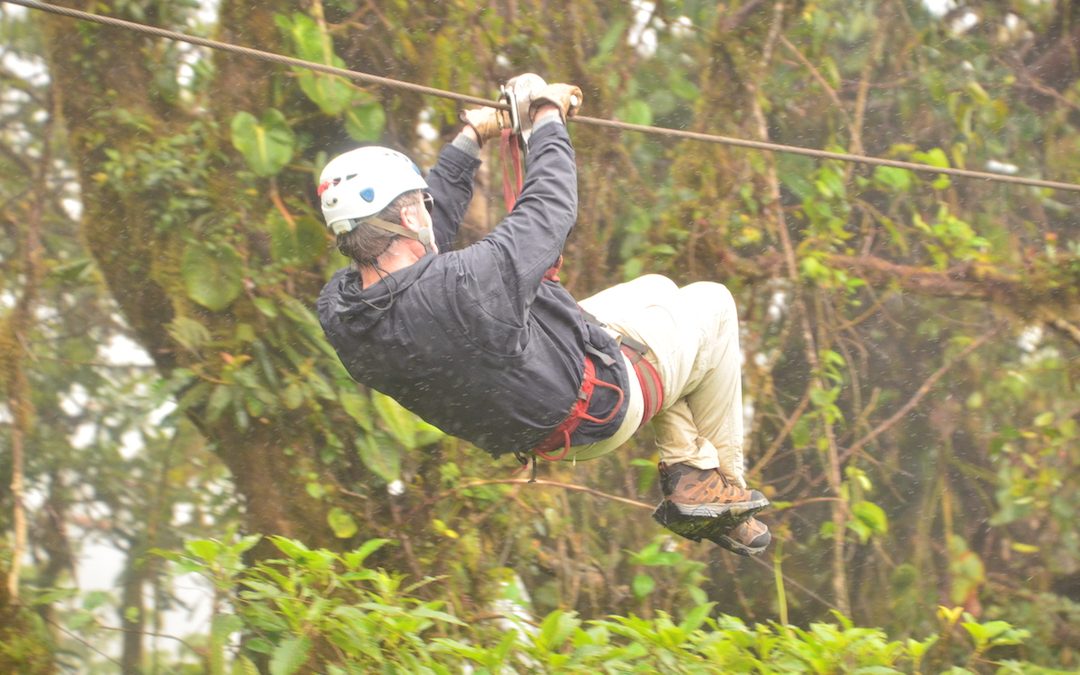 We’re back from our 12-day trek to Costa Rica. Kay-Kay says I need to write more personal blogs—something about either revealing more of my inner self or not being a crashing bore—so here are my Very Personal Thoughts on Costa Rica.

I’ve traveled to other Central American countries before, but Costa Rica is nothing like any of these. It’s not overrun by drug gangs (Belize), heavily armed guys (El Salvador), and/or grossly over-touristed places (Honduras).

There are two fundamental differences between Costa Rica and its six neighbors. First, in 1948, Costa Rica abolished its military. Yep, hard to believe a Latin American country without ill-behaved and over-medalled generals. Second, beginning in the 1970s, Costa Rica kind of invented ecotourism.

In regard to the first, by complete happenstance we were in Costa Rica for the first round of the presidential elections. There were candidates on the ballot from 13 political parties, each with their own simple party flag—most just two colors—festooning store fronts, lampposts and car fenders throughout the country. Returning from the Pacific coast back to San José on the Sunday when voting was going on, we drove past dozens of polling stations, some with lines and all with a long row of party tents outside the entrance, each with smiling volunteers handing out campaign swag.

Let us pause to note that a countrywide election with no political violence is a Very Rare Thing in that region. Oh, and the Ticos and Ticas—as the Costa Ricans call themselves—were very anxious about turnout since the last election was only 64%. For reference, turnout for last US presidential election was 57%. Perhaps apropos to the laid back vibe, no candidate got the 40% required for an outright win, so there will be a runoff in early April… between two guys named Alvarez. 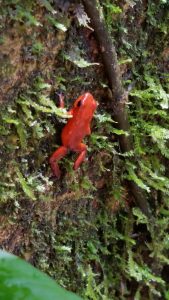 But it’s nature that really defines 21st-century Costa Rica. Beginning in the ’70s, Costa Ricans made a public policy decision to go all-in on protecting their environment, which has the highest species density in the world. And having been there, I can tell you we’re talking density. This little country—it would rank 42nd in size if it were a US state—has 29 national parks. And they account for 25% of the land area of the country. In the USA—the country that invented national parks—that number is 3.4%. Our Costa Rican excursion consisted of three-night stays near three of these parks—one on the Caribbean, one in the mountains, and one on the Pacific. 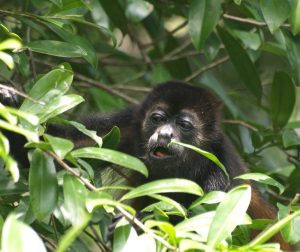 We started our trek flying a small airplane into a daylight-only landing strip on a barrier island on the east coast, then hopped a boat to a rainforest lodge in a very remote place called Tortuguero, just downriver from its eponymous national park. The lodge rooms have no windows, just screens and ceiling fans. Which means the alarm clock, at dawn, is… howler monkeys. Did I mention the rainforest started 30 yards from our door? 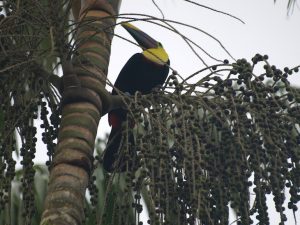 Kay-Kay was in hog heaven because she’s long had a thing for toucans. And Tortuguero has itself some toucans. After dinner one night, we stood under a palm tree by the pool watching a toucan eating palm fruit for like 15 minutes. Kay-Kay wet herself with excitement. I’m pretty sure. 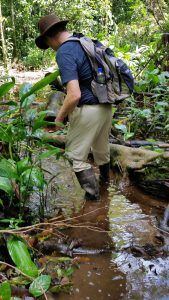 Because there’s no road—you can only get to Tortuguero by light aircraft and/or boat—the animals are completely wild and the rainforest trails rather dicey. There were three trailheads just behind our lodge, for which the management kindly provides heavy wellies (“rain boots” to Americans), walking sticks, and gallons of 30% DEET insect repellant. All. Very. Necessary. Ten feet up the trail we were swarmed by mosquitoes and many areas of sucking mud. I almost lost a boot in one. Sounds awful but it’s 100% worth it. Colorful poison dart frogs round every tree, a troop of howler monkeys paralleling us for a half-hour, and the creepy-wonderful stillness of unspoiled rainforest. In between sucking-mud incidents, I found myself writing descriptions in my head of what I saw along the trail, which is good writerly practice after all. 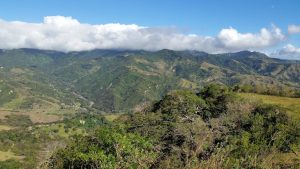 We reluctantly departed Tortuguero via an even smaller airplane and headed overland from San José to the mountains. Monteverde Cloud Forest Reserve is accessible by road, but I use that term generously. The cloud forest—that’s a rainforest at altitude—is accessible by a road in varying degrees of narrowness, switchback-ness, pothole-ness and mud-slide-ness.

Climatologically, the change couldn’t have been greater. We went from a Love in the Time of Cholera humid and languid river to, well, a Boeing wind tunnel. It was really windy up in the hills and it never stopped blowing the three days we were there. This, however, did not deter Your Intrepid Travelers. 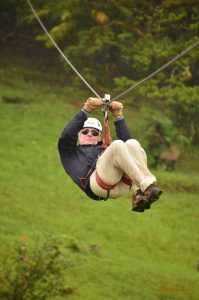 During a brief hallucinatory moment, Kay-Kay had convinced me that zip lining through the cloud forest would be sooooooo cool. When we got to the ziplinery—isn’t that what you’d call a place where they sell zip lining?—it was raining (sideways) and blowing (every which-way). Nevertheless, we took a tram to the top of the mountain and, swaying in the gale sweeping the first (of SEVEN) zip lining platforms, I asked one of our guides, “What’s the maximum wind speed before you cancel?” He said with an entirely too insouciant grin, “Ohhhh, about 80 km/hr, amigo.” I asked him what the wind was gusting just then and he said, “About 50 mph, amigo.” Which is exactly… 80 km/h. Yeah, funny,

I was the first one to go. This is when I discovered that “cloud forest” is not just a clever name. The sign next to me said the landing platform was 750’ away, but I had to take this on faith because there was an actual cloud obscuring it. Still, not wanting to seem like a weenie in front of my wife or the three semi-intoxicated Slovakian gentlemen with us, off I went. 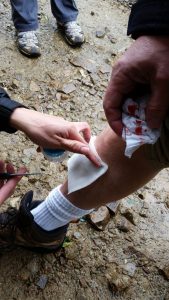 And it was… amazing. It’s as close as you can get to the sensation of a bird flying through a rainforest canopy. Yes, I could have plunged 200 feet to my death (which I unfairly suspected was Kay-Kay’s plan all along), but it was so very beautiful I forgot entirely about the stinging rain pelting my face or the gale-force gusts. This is not to say everything was peachy. In my excitement, I forgot the most important rule—spread your legs WIDE when you land—and dragged my shin along the cable, leaving six inches of skin behind—but it didn’t matter. All I wanted was to get to the next of the six zip lines.

We also did a “sky bridges” hike—this across a series of a half-dozen suspended footbridges, much like the ones someone always cut loose with a machete in every single Tarzan movie ever made, and visited four incredible butterfly houses. (There are a LOT of butterflies in Costa Rica.) Then it was time to go back down the Highway of Death to the central valley, and hang a right for the Pacific. 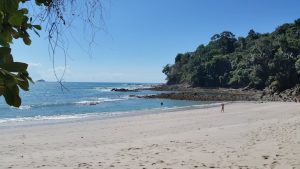 Our last stopover was three nights in a very swanky beach resort in Manuel Antonio, which also has its own eponymous national park. This is when we hit upon a somewhat disturbing realization. Beautiful, wild, fascinating Costa Rica is in danger of being loved to death. Manuel Antonio National Park is a rainforest that runs right along some of the most beautiful seacoast and beaches in the world. The problem is that it’s too easily reached by highway and locals and tourists come in their thousands. 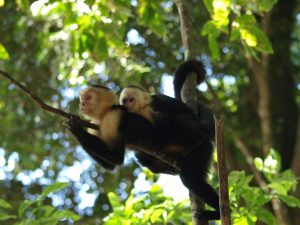 Don’t get me wrong, there’s an incredible diversity of flora and fauna. It’s just not so wild anymore. Hiking through the rainforest, unlike the lonesome trails in Tortuguero, we were accompanied by several hundred people. The “trail” is actually a graveled road sliced through the rainforest—if you’re old or disabled, you can actually hire a taxi to drive you through. The effect on the wildlife is completely predictable. The capuchin monkeys have almost given up foraging in the jungle and live on a diet that consists of the contents of tourist’s backpacks.

Tortuguero will probably withstand the worst effects of this smothering affection. Monteverde may not, since the government is widening, straightening, and paving the road to the top of the mountains. Some of our guides expressed real concern about this. 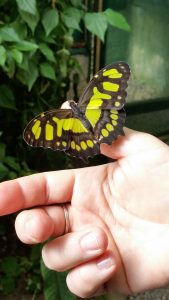 It’s a tough problem. One of the main reasons Costa Rica went all in for environmental protection was the potential economic benefits of ecotourism. This has proven to be true. Kay-Kay and I were surprised how many of the guides were young, well-trained, bilingual, and from the local area. Ecotourism has ended the age-old development problem of all the young people leaving for the cities because there’s no work for them in the rural areas. Unfortunately, the very success of Costa Rica’s environment strategy may end up being its biggest threat.

Still, we hope to return to Costa Rica. After all, there are still 26 more national parks to explore.

[In case you’re wondering, Kay-Kay took all of the photos except the ziplining ones which we purchased from Sky Adventures.]