How Did Mistrusting Russians Become Partisan? 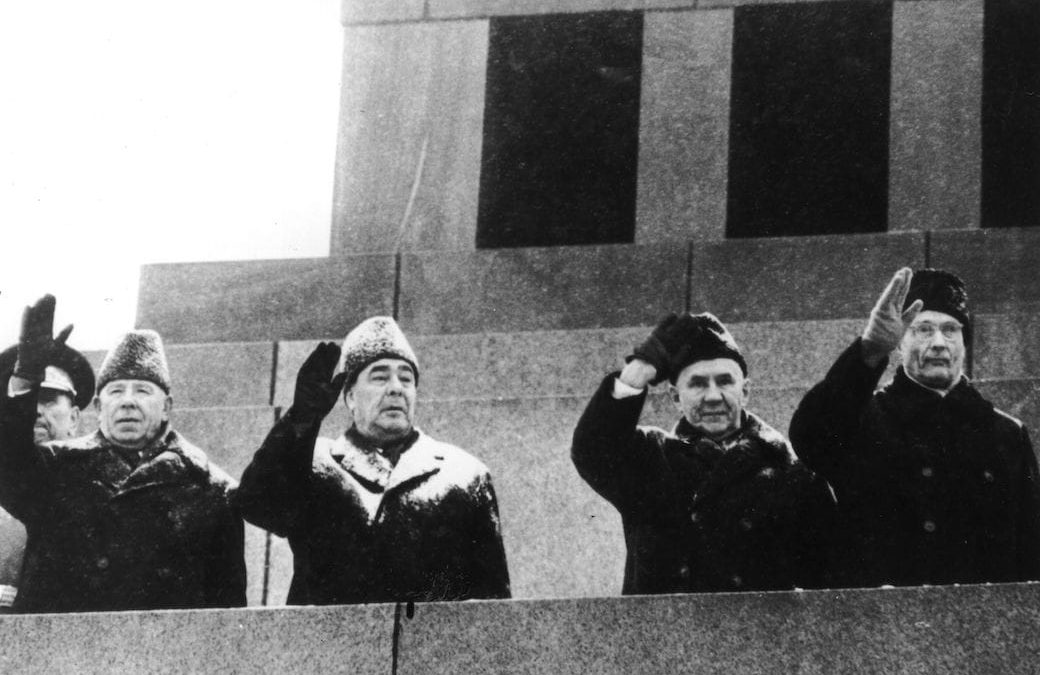 Let’s get this out of the way. I’m a Former Cold Warrior and I was raised a child of the Cold War. As a result, my default setting on Russia is “Hard Nyet.” Yeah, I kinda dislike Russia. I certainly mistrust Russian leaders. 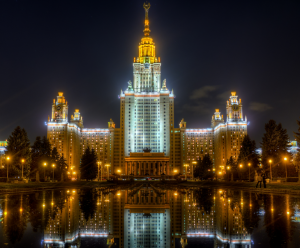 This is not to say I hate Russians. I’ve known a lot of really awesome Russians. I’ve taught really smart Russian law students. Been to Russia and thought it was very cool. Hung out with law faculty from Moscow State University. I’m even a fan of borscht, the only form in which beets don’t gag me.

No, it’s the geo-political entity of the Russian state and its government with which I have long-standing issues. This includes in the guise of the Union of Soviet Socialist Republics or the Russian Federation. And particularly in its current incarnation of Putinstan (name change pending results of next “election”). 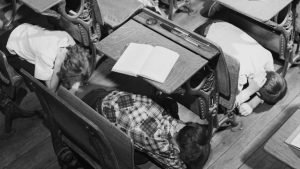 I’m just old enough to remember duck-and-cover drills in grade school. My dad also built a fallout shelter in our basement. This consisted of converting the coal bunker of our Victorian heap of a house and involved several tons of sand packed behind cheap knotty-pine paneling. There were also many boxes of dried foodstuffs. He installed a chemical toilet and built in some orange vinyl-covered bunks.

By the time I hit high school, Vietnam was over and we had more anxiety over setting our acrylic disco shirts on fire than a general nuclear exchange with the Soviets. So in the end, no one ever used the chemical toilet. But I did a lot of making out on those squeaky orange-vinyl bunks. You just had to be careful not to knock against the walls, because sand leaked out the cracks. 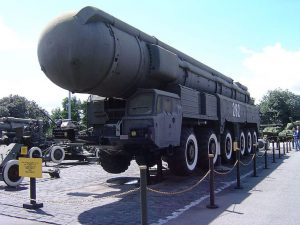 For four years, I was daily immersed in geopolitics. During that time, each and every International Relations course I took was almost entirely about the USA-USSR superpower bipolar global system. Also, how to deter nuclear war between these aforementioned superpowers. So I developed a lot more mistrust of Russians in my salad days.

I can’t exaggerate how all-pervasive the Russian Soviets were to our academic and political thinking. In four years of study, I never heard anything about China other than, “Lots of starving people, backward country, they don’t matter.” That was it.

Reds Under Our Beds 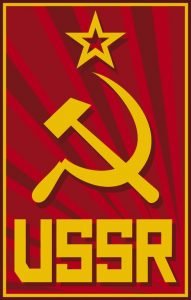 Like the Olympics, the entire global system seemed structured around the USA vs. the Soviet Union spheres of influence. We carved up Europe, Africa, Latin America, and Asia into “fer-us” and “agin-us” countries. These places provided ample opportunity for (non-nuclear) proxy wars like the American debacle in Vietnam and the Russian disaster in Afghanistan.

It’s hard to imagine now studying international affairs and spending all your time studying Russia. We were obsessed with puzzling out ways to keep them from using their formidable nuclear-armed military against us and our friends.

This seems quaintly nostalgic and a little comical, viewed from 2021. But in 1978, we were deadly earnest about “the Soviet threat.” Everyone who mattered in America, regardless of political affiliation, mistrusted and didn’t much like the Russians. Not even a little. 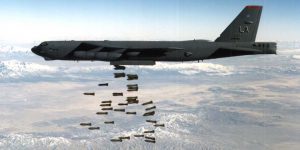 After college, through a quirky set of circumstances I found myself a navigator in B-52 bombers. During my bomber days, the rhythm of life for me and my family was determined by the Soviet Union. I had to sit nuclear alert one week out of every three, sleeping in underground quarters next to our nuked-up aircraft, waiting for the alert klaxon sound sending us scurrying to our aircraft.

Whether Kay-Kay and the kiddies could have dinner with me at the Officers’ Club or even visit me for a few minutes was entirely determined by how close the nearest Soviet submarine was to the northeast coast of the USA. More to the point, by the flight time of its nuclear missiles to ground zero over our base.

So yeah, I was not a fan of Ivan Bagodonutz, our generic Russian opponent.

The Wall Comes Down

It turns out the Soviet Union was profoundly dysfunctional to a degree we couldn’t have imagined back then. Ronald Reagan gave it the last shove, not by the might of our military, but by the thickness of our wallet. He outspent the Russians. He also mostly mistrusted the Russians, with the most excellent negotiating maxim, “Trust but verify.” 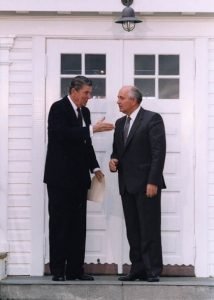 With something better than one foot in the grave, Gorbachev had enough runway in front of him to see how bleak the future looked for his country. When Gorby tried some modest political and economic reforms, the whole moldering house of cards came tumbling down.

In my second year at Georgetown Law, things came apart. One November afternoon, having just gotten through the door, Kay-Kay came flying down the hallway and said, “Come to the TV! Fast! They’re tearing down the Berlin Wall!” Staring at the news coverage, I started to cry from complete disbelief and all the years of fear evaporating.

Corruption, With an Attitude 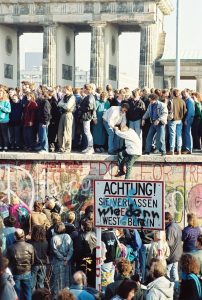 The Soviet Union didn’t last long after that. By 1991, Gorbachev was gone, as was the Warsaw Pact and non-Russian parts of the USSR. It all happened at breakneck speed and was an utter humiliation. Russia went from one of two superpowers to third-rate country with a decaying nuclear arsenal in the blink of an eye.

I was driving from Chicago, where I’d just taken the bar exam, to Alabama, where I was to start Air Force lawyer school, in August of 1991. Passing through Memphis, I picked up a radio station. The news announced that President Bush had ordered the nuclear alert force to stand down. I had to pull into Stuckey’s to digest that news, along with a hot dog and pecan log roll.

Russia became a kinda-sorta democracy and capitalist economy. Thing is, the Russians didn’t have experience with either one. Things went predictably bad quickly. The economy turned to rampant corruption breathtakingly fast. By 2000, the presidency was won by a short former KGB lieutenant colonel named Putin. And he had a carefully nursed grievance with the USA.

We’ve now seen what Mr. Putin had in mind for us all along.

Even Russia is a Partisan Issue 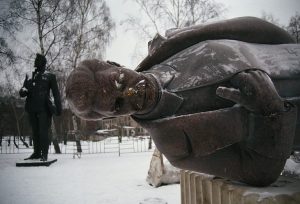 For all but the last five of my years on this planet, there were two things all American politicians could agree upon. First, you can never spend enough money on infrastructure in your home district. Second, mistrust the Russians.

There’s a growing mountain of evidence that Vladimir Putin and his henchmen wake up each day and say, “Our country is in decline, humiliated by the West, with not much going for us. So, what can we do to harm the United States today?”

Seriously, this is programmed into their DNA. There’s an old story about Russians that perfectly captures this.

A poor Russian farmer has a one dairy cow. He goes to the field and discovers she’s dead. He falls to his knees, shakes his fists and curses God for his misfortune. Suddenly, a voice from the heavens says, “Your cries have reached me, my son. Tell me what you want me to do.” The farmer gazes heavenward and says to God, “Please, Lord, kill my neighbor’s cow, too.”

So there’s that. But a strange thing has happened to us over the last decade. We’ve become… kinda Russian. Our politicians, like the Russian farmer, see a zero-sum game. If we lose, the other guys must be winning. We can’t have that. 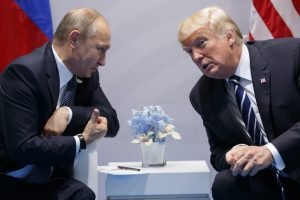 Ironically, this has led the conservative part of our body politic to cozy up with the Russians. Anything is acceptable in order to “own the libs,” to kill the neighbor’s cow. This even includes welcoming, even actively soliciting, interference in our democratic process by the very Russians we all mistrusted for sixty-five years.

Looking back over my own adulthood, it’s hard to believe how quickly and thoughtlessly a large segment of our society has unlearned the hard lessons of the Cold War. Russia is not a friendly power and never has been. And Russian leaders always should be mistrusted.

Russia’s interests are opposed to our interests. It’s as simple as that.

As Rudy Giuliani and Persons of Interest are dragged through grand juries and criminal proceedings for colluding with Russian intelligence agents and unscrupulous oligarchs, let’s not lose sight of that simple fact.