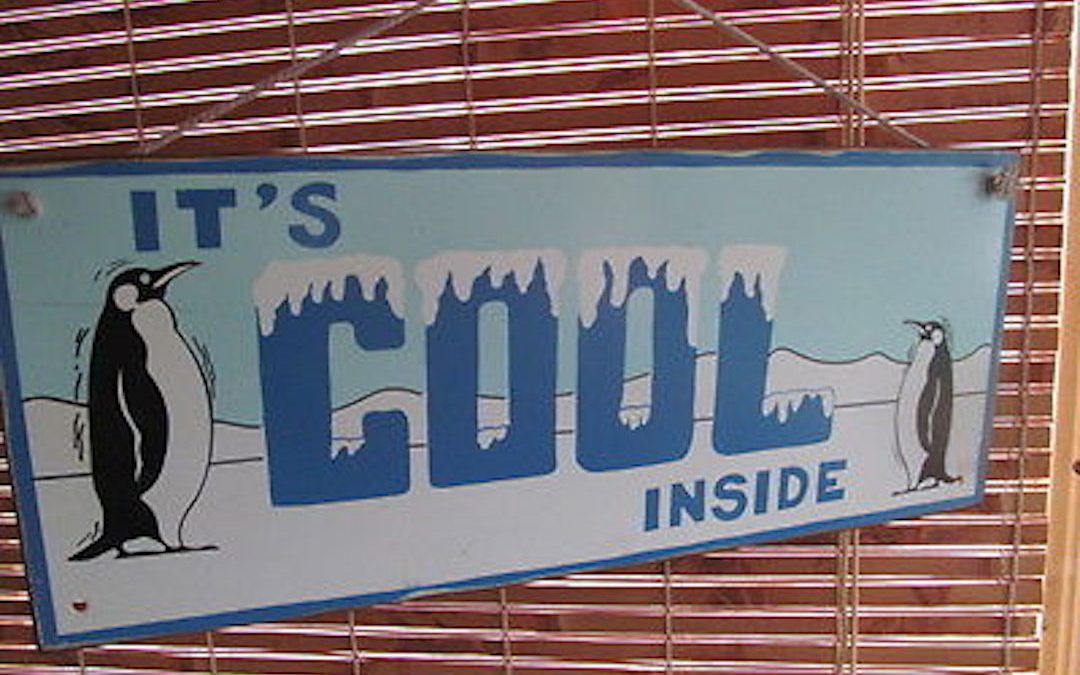 It’s hot. And humid. I mean feels-like-walking-through-boiled-molasses hot summer. Not just here in Virginia, according to Weather Underground, but the entirety of the Perspired States of America.

Let us give thanks to all deities and karmic life forces for central air conditioning. Which makes me go hmmmm while the AC goes hummmm. I’m recalling how there was once a time in a galaxy far, far away when real estate listings did not say “CAC, WIC, SGD.” OK, actually that would be 50 years ago in Skeeterville, my Hometown of Very Little Note. And I’m guessing in a whole lot of other places, too. 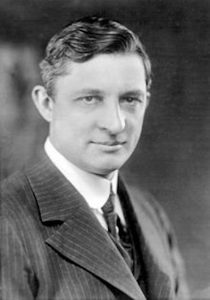 Air conditioning became an Important Government Priority in 1942. Now Willis Carrier invented electrical air conditioning in 1902, then went on to have a domed sports stadium named after him. I’m a Syracuse alumnus—Go Orange!—so the Carrier Dome may be a teensy bit more important to me than, well, every single one of the rest of you. AC started going into some public building, particularly movie theaters, in the 1920s, as well as a few Very Ritzy Homes. But it took the outbreak of the Second World War to turn air conditioning from marketing hook (“It’s COOL inside!”) to a Government necessity.

Here’s the thing. Washington, D of C—the Nation’s Capital—was a hideously hot and humid place in July and August. Still is. This is why men are to this day allowed to wear seersucker suits there… and I cannot think of any other reason why they would. Back in the day, Government mostly shut down for two or three months and everybody got the heck out of town for someplace cooler. However, thanks to those very inconsiderate Japanese and Germans, our Government couldn’t very well close for the season, the enemy not willing to go along with our capital city’s Summer Evacuation Program. Hence the need for installation of a lot of air conditioning. 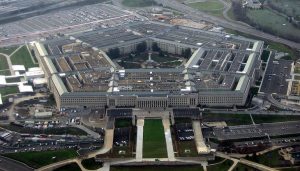 In order to get the War and Navy Departments out of “temporary” headquarters built during World War I and occupying a sizable chunk of the National Mall, the largest office building in the world was built across the Potomac in just 18 months. And it was air conditioned. I know this because when I occupied my own Squalid Little Corner of the Pentagon, c. 1998 – 2001, I experienced the original HVAC system first hand—with icy feet and a frozen nose. This being during the summer.

The systems in the Pentagon were so over-engineered—and hideously energy inefficient—that they spewed gargantuan quantities of heat and cold. We’re talking cold gushing out vents, pouring down like Niagara Falls. Ditto for heat in winter. In a perfect closed loop of global-warming energy consumption, we wore commando sweaters and blasted space heaters under our desks in summer, the air conditioning hard-wired to “Anti-Aging” setting. In winter, we all wore short-sleeved uniform shirts sitting in front of oscillating fans with the heat perpetually set to “Low Simmer.” It was… peculiar.

But that was when I wore a younger man’s blue polyester uniform with plastic shoes and I want to talk now about the Summers of my Youth. These would have been my salad days, had we ever served anything as exotic as a “salad” at our house. Or at least one that didn’t require lime Jell-o and mini-marshmallows.

I grew up in a late-Victorian that had no air conditioning. As a sign of my parents’ growing prosperity, the Vietnam War being Very Good for Business, Dad insisted we buy window units for the three bedrooms (three boys, one sister, two parents) upstairs and one for a window in the corner of the living room that he thought would cool the entire first floor. With no insulation and 75-year-old leaky double-sash windows. Did I ever mention my father was not an engineer? 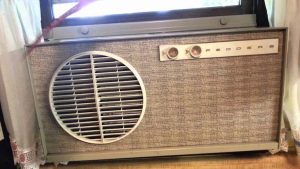 So anyone driving by Chez Moi could see just how affluent we were by the big, ugly boxes hanging from our windows—including two front windows. But here’s the catch. Dad purchased the Fedders and the Hotpoints—the one in my bedroom had a very natty plastic faux wood grain front cover—but it was Mom who kept a death grip on the power knobs.

My mother—she just turned 92 in May, so still in the “Not Yet Sainted” category—was raised in a rather parsimonious, guilt-ridden/pleasure-denying Irish-Catholic extended-family household. During the Depression.

The result of this was we got a) all the social cache of AC ownership, but b) got almost none of the benefit. We’re talking four, maybe five of the absolute worst dog days of a breezeless prairie August when you might be allowed to cool down the bedroom a little. On the plus side, I was assured on many, many hot summer nights that I was a) assisting the Poor Souls in Purgatory by offering up my sweaty suffering, and b) shortening my own inevitable future residency there, too. So I have that going for me.

Actually, Mom might be some sort of technophobe Luddite, now that I think on it. After she convinced Dad we needed a kitchen remodel by picking up a crow bar and ripping out all the old cabinetry one day when we were at school, her new kitchen had a shiny new Kenmore dishwasher. Which she used exactly once a year. On Thanksgiving. I’m certain that was only because the extended family was there and she loved being able to say, “Oh, I just popped everything in the dishwasher.” She’s also never to this day turned on any computer device.

It wasn’t all that bad, really. Those long hot summer days with no school were glorious. In those No-Bike Helmet and Pre-Pedophile Anxiety Days, we were given utterly too much unsupervised freedom. At a very early age—no older than 9 or 10, maybe younger—my many neighborhood friends and/or cousins (I had eight of those right across the street) would head to the end of our street that dead-ended at the river. We’d swim in the muddy, DDT and dioxin-laced water in our clothes, then go mess around in the woods along the river bank until we mostly dried out. That made the heat bearable, despite the fact that nearly every summer some kid in our town drowned.

My house had a huge shady front porch with a big swing, which created just enough breeze when you kept it going to dry the sweat off you. There was a little convenience store—although that term didn’t exist then—around the corner from us called Pic-a-Pac. We’d bum change off Mom and go buy a Pepsi in those heavy returnable bottles that kept cold forever. Also a Hostess Fruit Pie or those waxy chocolate cupcakes with the squiggles of white. Then we’d repair to my front porch to tell harmless lies and dream the dreams of youth. 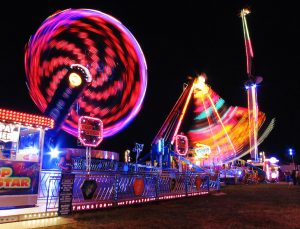 The hot weather also meant the carnival would be in the City Park soon—August was Skeeterville’s month on the Carnie Circuit. They’d take over half the City Park and a full block of East Catalpa Street. We went every night, not so much to ride the Tilt-a-Whirl or the Merry Mixer, but just to see the flashing lights, hear the blaring music, and catch up with friends from other parts of town we hadn’t seen since school let out the end of May. And as we reached junior high and a confused puberty, quite a few innocent romances began there, too. 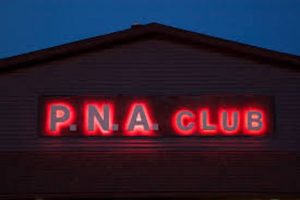 My brother—not a naturally adept dancer, I assure you—was taught how to polka by a brown-haired girl at a PNA picnic. He asked her out somewhere between “The Beer Barrel” and “The Too-Fat.” They’ll be married 40 years this August. And in no way related to this, no PNA Picnic was considered a success without at least one major cardiac incident, generally brought on by a surfeit of heat, polkas, and possibly a piece of kielbasa lodged in an artery. I witnessed more than one ambulance arrival in my days at the PNA—not all, I might add, with successful departures. This was also the untrained paramedic days, with ambulance service provided by a couple of the funeral homes in town. Which looking back seems to me to have created perverse incentives, since you could make a lot more money out of a funeral.

And of course, no matter how hot it was, you still had to crank up the stove if you wanted any dinner at our house, it being before the Age of Microwaves. But unlike my time in The Pentagon all those years later, Mom thought it the height of lunacy to waste air conditioning cooling a house you’d just gone to all the trouble of overheating with the gas range.

Somehow, shivering in my patchy-elbowed commando sweater with my feet on a contraband Pentagon space heater during Washington’s high summer… Mom finally kinda made sense.