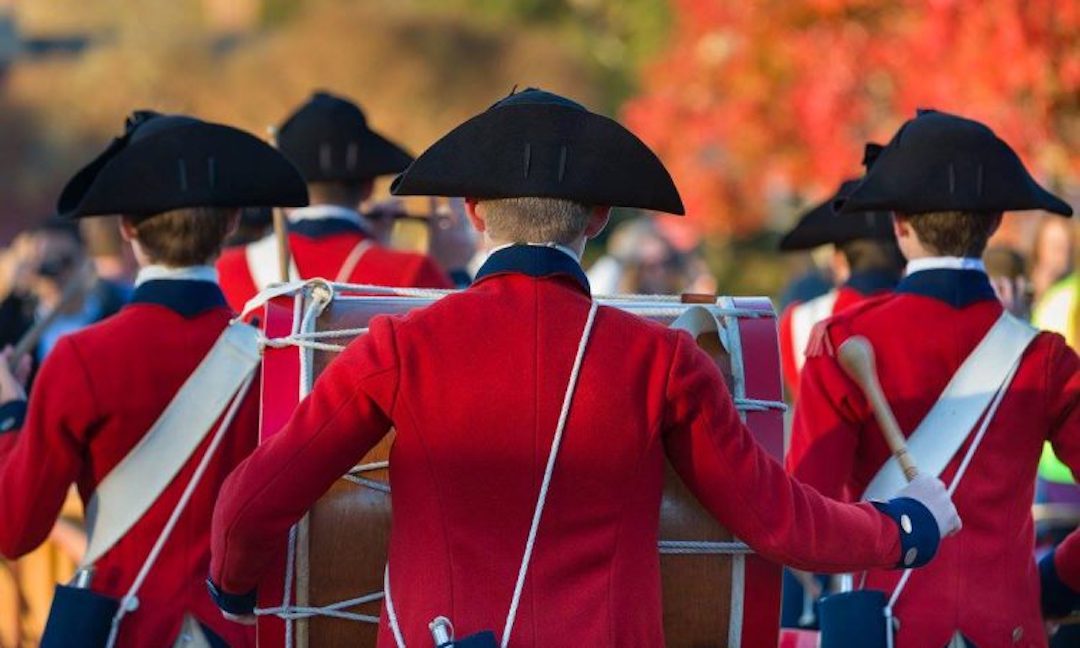 l love HBO’s “Westworld” series. I mean, who can resist all that robot sex and violence? It’s such a thinly disguised metaphor for our alienation and search for authenticity in this age of Runaway Technological Change. Of course, I REALLY love the original 1973 über-cheesy movie version—the one with James Brolin chewing the scenery and Yul Brynner as a black-clad homicidal-King-of-Siam-turned-gunslinger-robot. I’m pretty sure that’s how it went, but my memory’s not what it used to be.

My own day-to-day reality is sort of like “Westworld,” just without the killer sex-robots. I live in Williamsburg, Virginia. You know, Colonial World. 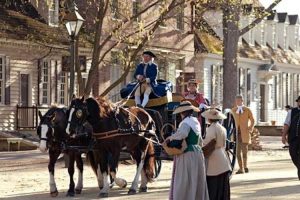 If you ask Americans the first thing that pops to mind when you say “Williamsburg,” 97.5% will say “colonial” or something close to that. These being history-illiterate Americans, I’ll also accept “old stuff,” “those funny hats,” or “Christmas ornaments from Southern Living magazine involving pineapples.” The other 2.5% are from New York City and when asked “Williamsburg?” will inevitably reply “weekend brunch—we take the L Line.”

Williamsburg was the capital of Virginia for 80-odd years. The first capital was Jamestown. This was because Jamestown is where the first English settlers settled their English selves, then commenced to starve and do Pocahontasy kinda stuff. Turns out Jamestown had some problems. Even after the recurrently hostile natives were—ahem—“dealt with,” it was still situated in the midst of malarial swamps. And the wood-framed, wood-shingled, wood-clapboarded and many fireplaced Capitol building kept burning down. So in 1698, after Yet Another Burned-Down Capitol building, the House of Burgesses defeated a motion to rebuild in Jamestown with, if I recall correctly, a three-word resolution: “You’re kidding, right?”

So they upped stakes and moved seven miles inland to a place called Middle Plantation. In an act of sycophancy so vast it is rivaled only by the renaming of “Ronald Reagan National Airport” the bigwigs (quite literally) of Virginia rechristened the new capital “Williamsburg.” This being the name of the current (Dutch) occupant of the (British) throne. Williamsburg remained the capital of the Crown Colony of Virginia right up until the War of Independence, when some no-account rube from one of the western counties got himself elected governor and in 1779 moved the capital to Richmond in order to shorten his commute. OK, I made up that last part, but Thomas Jefferson was indeed responsible for this dastardly deed. 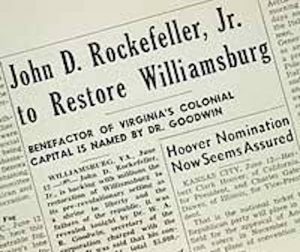 The town lay fallow for the next 150 years, another fading southern town with more history than future, until A Guy with Stacks Of Money—John D. Rockefeller, Jr.— noticed. More to the point, his wife noticed. Since her name was Abby Aldrich—a Mayflower descendant—she was quite tickled at the thought of her and her Idle Rich Friends dressing up in fancy 18th-century clothing and flouncing around for a couple of weeks each year. So she asked her hubby, “Dear, could you use some of your walking around money to buy me most of an old town in Virginia?” The dutiful husband did just that, turning it into what is known around the world today as Colonial Williamsburg.

This influx of Rockefeller money forever changed the City of Williamsburg. Granted, it’s also the site of the second oldest university in America, William & Mary (double dose of royal sycophancy), a highly regarded state institution. But it was CW (as it is fondly known) that reversed the town’s slide into comfortable irrelevance. 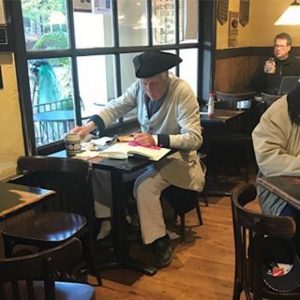 What has resulted is a place where much of daily life—and a big slice of the local economy—revolves around closing our eyes and pretending it’s 1775. It helps that there are gazillions of people running around in colonial dress all the time. Nobody bats an eye, for example, when you get in line at Trader Joe’s behind some guy in a tricorn hat, knickers, and Ben Franklin glasses. I’ve actually heard this conversation:

We also enjoy—or suffer from—an annual migration known as The Arrival of the Middle School Trippers, regular as the return of the swallows to Capistrano. This has become a right of passage for nearly every 8th grader in the Eastern Time Zone, as well as a surprising number from as far afield as The Left Coast. For two or three brief shining months every spring, Williamsburg is a riot of ragingly hormonal and eye-rollingly bored barely-teenagers. This is quickly followed by the Educational Family Vacationers in the summer months, all driving SUVs with Pennsylvania, New York, or New Jersey license plates. We get one final spike during the Holiday March of the Retirees, who arrive by their busloads to gaze upon our Very Quaint Colonial Christmas Stuff and drop lots of cash at the outlet stores buying socks for the grandkids. Who would much rather have the cash than the socks. But hey, they’re our bread and butter.

In 1972, Anheuser-Busch arrived and built a Very Big Brewery. They also opened Busch Gardens Williamsburg a few years later, because nothing says fun like swilling beer before riding five roller coasters, am I right? Add to this the other Two Angles of the Historic Triangle, Jamestown and Yorktown, and we’re now a multi-day “vacation destination” with TV commercials of high production value and glossy ads in airline magazines. All colonial, all the time. Busch Gardens even has old-timey European “lands” to visit—thatchy Ireland, half-timbery England, some strange Quebec fur trapper place with Many Log Buildings.

There’s a noticeable spillover effect, too. Ask any realtor how hard it is to sell a house in Williamsburg that isn’t a colonial. (I write this sitting in my open-plan contemporary—but we’re on the water, which is the only known antidote to Lack of a Colonial Look.) Everything seems to be colonial themed to one degree or another, but you get used to that. It’s sort of who we are.

Below this sometimes schmaltzy colonial veneer, however, there’s a genuineness that compelled me and Kay-Kay to make it home. We even abandoned New York City after five long years to come back, so we can’t help but make comparisons. In Williamsburg, for example, there are no “hurry honkers” of which NYC is more infested than with bedbugs. In Williamsburg, if you zone out and miss the light turning green, the (maybe three) drivers behind you will wait a second light cycle before getting out of their cars to make sure you haven’t had a stroke or something.

By way of another example, it’s physically impossible to just run into the store and get a gallon of milk here. You’re required—possibly by local ordinance—to make 4-5 minutes of conversation with the check-out person, re: weather, health, or current price of unleaded. Nobody in line expects anything different. Heck, they’ll jump in with, “You’re so right! It’s colder than a well digger’s backside today!” And the people behind them will all be nodding and uh-huh’ing, too.

It’s a different kind of place, to be sure. Some parts seem almost frozen in amber—Colonial Williamsburg, of course, but we also have 16 churches with the word “Baptist” in their name and 14 pancake houses. Apparently when people come here on vacation, they’re suddenly overcome with both intense cravings for a tall stack and an urge to repent their sins. This is in a town with a peacetime population of 15,000, mind you. 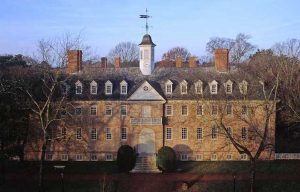 We have the university, however, and that freshens things up. Still, even William & Mary is an integral part of the colonial zeitgeist. It’s original building, built in 1695, was designed by Sir Christopher Wren—the architect who was in the right place (London) at the right time (after a Really Big Fire). My daughter, Peanut, went to William & Mary and her freshman dorm was right on the edge of the colonial area and her room was right next to the front door. She recalls having visitors knock on her window to ask, “Can you tell us how to get to the Governor’s Palace?” Seriously.

On the other hand, the back of her dorm t-shirt read, “Confusing Tourists for Over 300 Years.” So yeah, there is that…