When the Moon Hits Your Eye Like a Big Pizza Pie 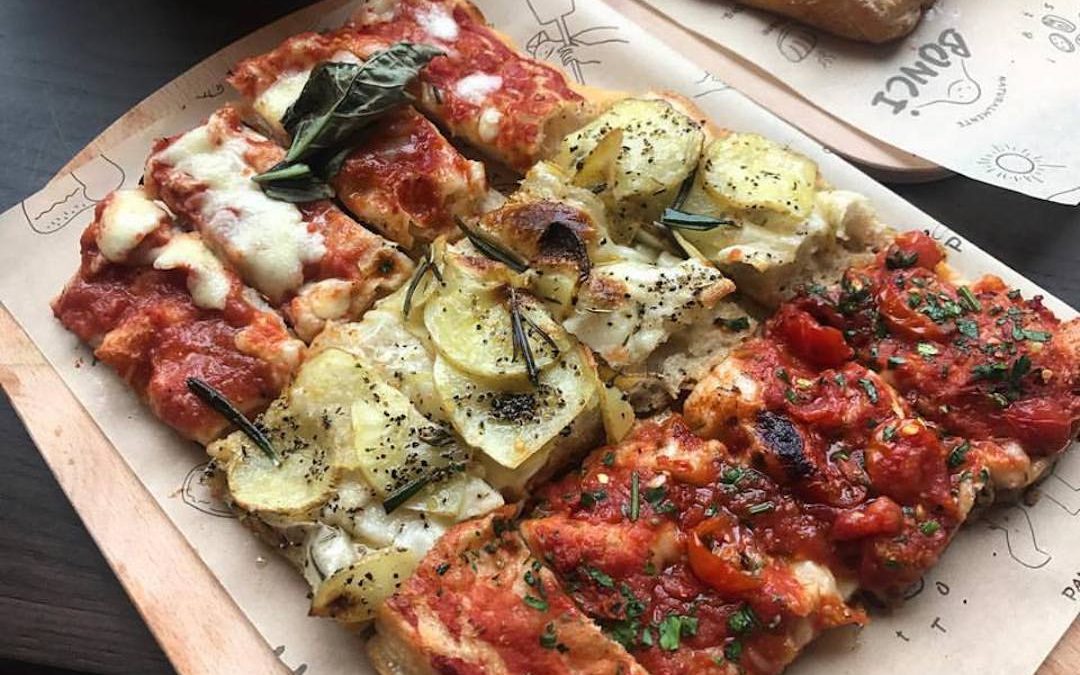 That’s amore??? I’ve never figured that song out, and I say that as a man with the utmost reverence for the late great Dean Martin. I mean, first of all, the moon, besides being round, looks nothing like a pizza. Second, I’ve never found it an effective dating method to hit one’s inamorata with any sort of baked good. OK, maybe Famous Amos, but definitely not pizza. 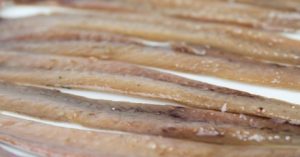 Third and last, hitting someone in the eye with pizza constitutes simple battery in at least 49 American jurisdictions—I’m a little skeptical about Hawaii, what with those pineapple chunks. Hitting someone with an anchovy pizza, however, constitutes aggravated assault. I mean, it must, right? We’re talking anchovies.

But we can all agree there’s a lot of amore out there for Nature’s Perfect Food, the sturdy and reliable pizza. As my three or four regular readers must know by now, there is More to This Story. I, of course, am just the guy to tell it.

The Washington Post did their weekly “Five Myths About…” piece yesterday on myths about pizza. They actually expended journalistic effort and column-inches to myth-bust the raging academic debate over whether the deliciously simple pizza margherita was, in fact, named after the wife of King Umberto I who visited Naples in 1889. Translated into American, this would be “cheese pizza” and “does anyone care.” 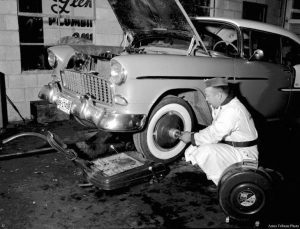 Full disclosure—Kay-Kay and I, dragging three Air Force brats behind us, lived in Italy from 1994 until 1997. So this is a subject about which I have some Important Life Experience. Ditto with gelato. Also with Italian mechanics who wear lab coats and half-glasses on chains and talk like research scientists about dire threats to one’s 1982 Lancia which really only needs the plugs re-gapped.

The southern Italians have always been adept at creating tasty po’ folk food that could be quickly eaten and filled your tummy for a few hours. It was the Neapolitans who perfected the pizza and some of the world’s greatest pizzas can still be found there. As the WaPo pointed out, however, tourists were not always gaga about genuine Neapolitan pizza, quoting Samuel “Dits & Dahs” Morse as describing pizza he encountered in 1831 as “a piece of bread that had been taken reeking out of the sewer.” What hath God wrought? Apparently not edible pizza. 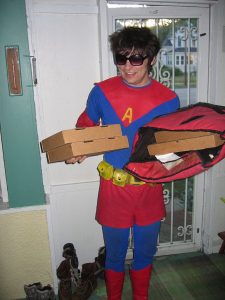 Pizza really came into its own in America after World War II. The pizza had long been available in the Italian enclaves of cities like NYC, Boston and Philly, but it really broke out nationwide in the ’50s and ’60s. There are several theories about why this happened, but I will posit my own—people like to eat with their fingers and American pizza is always eaten with one’s fingers. Also, delivery of something hot and minimally edible to your front door by some guy in a stained polo shirt speaks of our love affair with convenience.

As far as I know, the first pizzeria in my Fly-Over Country hometown of Skeeterville was Lucia’s on East Main, down by the Fire Department. I have no idea whether that means anything. And to be frank—I hated it. And looking back now with my experience of Real Italian Food, it was objectively awful. But Lucia, which I’m pretty sure was not his actual first name, was a bona fide Italian immigrant. This gave a certain exotic cache, both to him and his pizza. As far as I know, he was only known to speak one phrase of English, to whit: “”It’ll be about-ah twenty minute.” Which was really all he needed, after all. Also in hindsight, he sounded a lot like Super Mario.

On the other hand, my Vatican-twin brother, Dutch, was crazy for Lucia’s pizza. Four or five nights a week he’d call in an order, and after the requisite about-ah twenty minutes, convince a parent to drive him over to get his pie. Mom and Dad indulged (and funded) this, I believe, because Dutch was known as A Finicky Eater of Bizarre Tastes. For example, he would often down an entire jar of hamburger dill slices, then drink the brine. One of his favorite snacks was two saltines with peanut butter between—wait for it—slathered with that bright yellow French’s mustard. On the other hand, he may have been the paleo-foodie “Patient Zero” of our current sweet-salty flavor craze.

To be fair, you have to distinguish between Italian pizza and American pizza. These are only vaguely related, perhaps akin to a jaguar and an ocelot. Both cats, but they taste very different when killed and eaten. I think. I make this comparison only because I wanted to use the funny word “ocelot.” 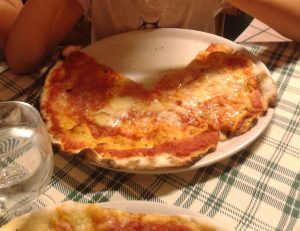 In restaurants, Italian pizza is served as a one-person dish, with a crispy-thin crust, very light on the sauce and cheese (gasp! if there is any cheese), and with judicious amounts of a few toppings. This results in your ability to eat an entire pizza yourself and not feel like an overfilled water balloon. In fact, Italians consider pizza a light meal. 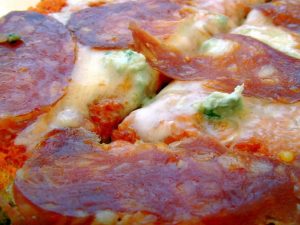 As is the way of things when they transmigrate to America—automobiles, appliances, Justin Bieber—they often become outsized and garish. Thus too the humble pizza. We deep-dished it and super-sized it. We ladled on Some Kind of Red Sauce and mounded up a Flavorless Substance Known as Mozzarella. We stuffed its crust with more “cheese” and threw in piles of breadsticks made from slicing up yet more crust. And we piled on the toppings. What is considered a light meal in the land of its birth has become a two-slice belly bomb in the US of A. 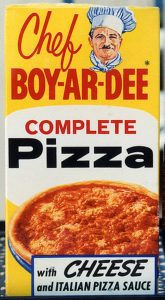 And let’s face it, there have been and remain some really bad pizzas in America. My actual first encounter with pizza was, as I recall, with one of those Chef Boyardee “pizza kit” boxes that my big sister decided we should try at home, c. 1965. It did not go well, which may have spoiled me for poor Lucia’s pizza, too.

The tectonic change in my pizza universe came sometime around sixth grade when, on the site of an old gas station just one block from my house, the gods gave us a Pizza Hut. This red-roofed refuge became an instant “hang out.” Who actually decides to declare a new hang out? Is there a vote of the Really Cool Kids or something? Regardless, the Pizza Hut was it and I learned to eat pizza there.

I also later learned to smoke there, since I could duck in the front door and buy Kools from the cigarette machine in the entry without anyone noticing I was only 14. I don’t blame Pizza Hut—my Dad was a 3- or 4-pack-a-day smoker, so once Mom figured things out, she started buying cartons of Kools right along with Dad’s L&Ms. I should add that in 1973 this was not, in fact, considered bad parenting. I quit smoking about the time Reagan won reelection, so it’s all good.

The good news in Pizzaworld is that, as occurred earlier with wines and beers, we Yanks have gone in for artisanal pizzas, gourmet pizzas, and authentic Italian pizzas over the last decade or so. Of course, “American” pizza is so ingrained in our cultural rituals that, like Budweiser and Boones Farm, it’s likely to cling to life for years to come. Who, for example, is going to order in an “ancient grains” crust pizza with heirloom pig pepperoni and fair-trade arugula when hosting a Bears-Packers viewing party? Or a kid’s birthday at Go-Kart World?

This post would not, of course, be complete without the Big Reveal of my pick for World’s Greatest Pizza.

For me, hands down and no doubts, that title belongs to a hole-in-the wall joint with no chairs inside and one park bench outside, a space that can comfortably hold maybe 11 standing adults. It sits just across from an exit of the Cipro Metro station in Rome, which is named after something to do with Venice and a war, not the antibiotic. This is Pizzarium, owned and operated by that pizza genius, Gabriele Bonci.

We got to meet Bonci a couple of times during long stays in Rome where I taught summer law courses. He has perfected every single component of a pizza—the flour that goes into his crust, the tomatoes that go into his sauce. Every single ingredient is fresh and perfect. And to really blow your mind, my absolute favorite Bonci variety is potato pizza. I’m not kidding. It changed my life.

OK, I’ve thrown down the gauntlet. Like some intimate body parts, everyone has at least one opinion on where to find the best pizza, right? Please share in comments, if you dare.