Light at the End of the Tunnel 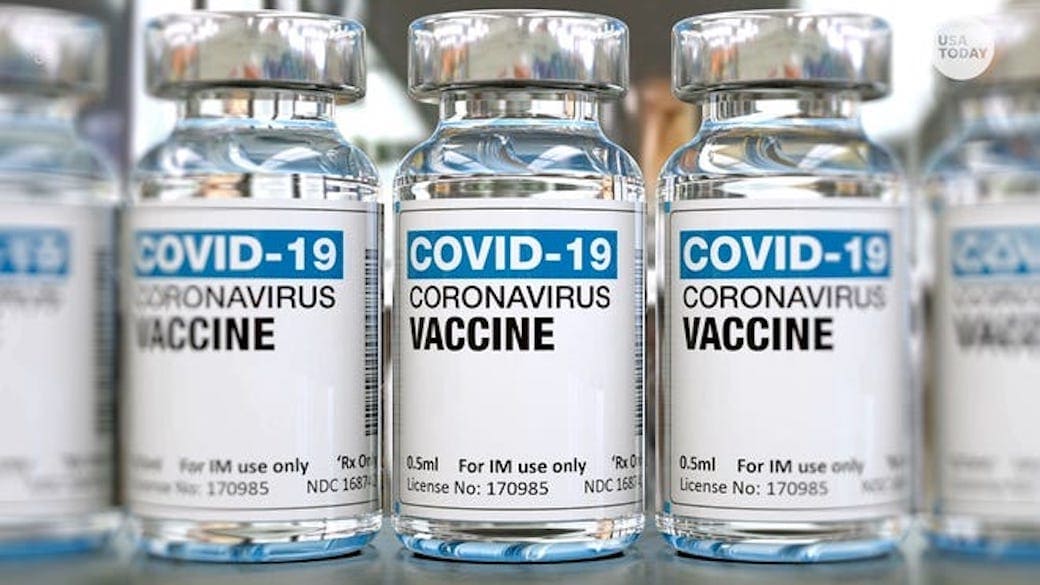 It’s been an extraordinary few days. Not one, but two COVID vaccines approved and shipped. It’s been one year since doctors identified an odd pneumonia-like illness in China. And now there is a vaccine going into health workers’ arms. In. Twelve. Months. Is there finally light at the end of the tunnel?

An unprecedented triumph of science over fear. 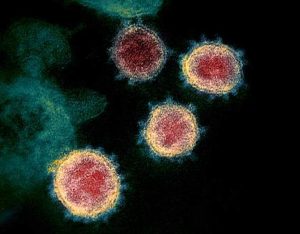 Having spent the last four years immersed in the period of the First World War, I’ve been struck both by stunning similarities and marked differences between then and now. Then, their pandemic was Spanish influenza; today, ours is COVID-19. Both coronaviruses, mind you, with those creepy protein spikes that make them look downright medieval.

The More Things Stay the Same

The parallel timelines of Spanish flu and COVID are what initially intrigued me, the ebb and flow of pandemic infections and deaths. In the USA, the first case of Spanish flu was reported among Army recruits at Ft Riley, Kansas, in March of 1918, although it had likely been circulating undiagnosed before that. By mid-March, the virus had spread to Queens, then across NYC. (Frederick Trump, the President’s grandfather, would fall victim in May.) The first surge of infections and fatalities lasted into July, but saw a relatively low death rate in America, amounting to about 75,000. 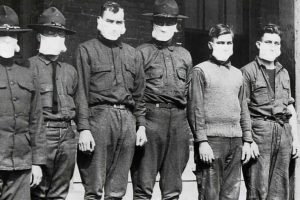 As with the Spanish flu, we’re in the midst of a more serious second wave that began in late October and early November. In 1918, this deadly second wave claimed almost 300,000 lives in a population of 105 million. With the current American population of 335 million, an equivalent number of deaths would touch 1 million in three months. That light at the end of the 1919 tunnel was an oncoming third-wave train.

The Spanish flu saw a smaller third peak in the USA, beginning in February of 1919. In the late spring of 1919, a fourth American peak occurred, mainly within the biggest cities. All told, by the time the pandemic burned out in early 1920, the United States saw more than a quarter of its population infected and as many as 850,000 excess deaths.

The Ravages of War 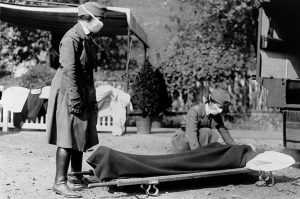 Worldwide, the mass movement of troops from far-flung countries to France acted as a high-speed pipeline for spreading infection. With American forces arriving at the rate of 100,000 each week, the Spanish flu quickly spread throughout the Allied and German camps and trenches. By the summer of 1918, for example, three-quarters of the French Army of 8 million had become infected—this after 45 months of grinding trench warfare. The American Expeditionary Force lost as many men to Spanish flu as to combat.

The fact that the Spanish flu pandemic commenced during a global conflict provided the perfect conditions for rapid, uncontrollable spread. Besides the mobilization of more than 50 million soldiers living in crowded camps and trench conditions, factories ran around the clock. Maritime shipping was at an historic high, with men, supplies, and raw materials moving between almost every nation. 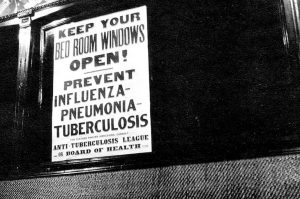 Unlike COVID, the Spanish flu was most fatal to young, healthy adults aged 19-25. This was exactly the demographic crowded into those military camps and war production factories. The 1918 version of the H1N1 virus often triggered what is now called a “cytokine storm” in many victims. This causes a rapid immune system response, particularly in the lungs. In a sad biological irony, the healthier a victim’s immune system, the more virulent the response. Many young victims suffocated when their  lungs filled with fluid from their more robust immune responses. Other researchers have posited that the high death rate was also due to secondary bacterial infections, which in a pre-antibiotic era couldn’t be effectively treated, particularly in crowded and unsanitary field hospitals.

So although COVID-19 has thus far closely followed the time trajectory of the 1918 Spanish flu, we have a couple of decided advantages today. First, 21st-century medicine can keep very sick victims alive much of the time. Bacterial infections can be treated and patients can convalesce in hygienic conditions with optimal nutrition. 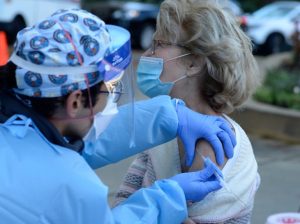 Second, we have vaccines and our 1918 predecessors didn’t. Rudimentary smallpox vaccinations had been available in Western countries since the 18th century. George Washington famously (and controversially) ordered the entire Continental Army vaccinated. Louis Pasteur and others produced a spurt of new vaccines in the three decades before the First World War by. But these had been developed over a period of decades and this painstaking process offered no chance of creating a Spanish flu vaccine while the pandemic still raged.

Vaccines can now, as we saw last week, be developed from scratch against a newly mutated virus in months, not years. Pasteur would shake his head in wonder at where his early research has led the world. As Dr Anthony Fauci has said, these new vaccines prove the power and cumulative benefits of good, ongoing, basic scientific research.

Unlearning the Lessons of Spanish Flu

I’ve been surprised at how little the basic precautions have changed over the last century. The first line of defense was masks in 1918 and 1919—and they likewise triggered much debate over mandates and enforcement. Hand washing was widely preached. The most effective public health intervention in areas with spiraling infection rates, then as now, was quarantining. Unlike now, however, combatant nations could not suspend or even limit war production, so factories became a major source of contagion. Ditto military training and field operations.

In a curious similarity to our current spread of misinformation and suppression of facts concerning COVID-19, the Spanish flu received its utterly inaccurate name in 1918 for a particular geopolitical reason. Spain was a neutral country during the First World War. As a result, the only European or North American country within which the press was allowed to report the early existence and spread of the new strain of influenza was… neutral Spain. Within belligerent states, this information was officially censored to preserve, it was thought, the morale of the people during wartime.

We Really Can Count Blessings 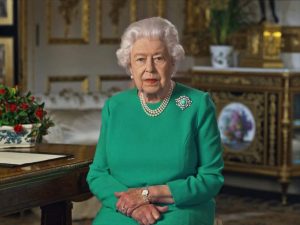 2020 has been a true annus horribilus, (tr. “really, really, really crappy year”). This phrase was made famous by The Queen after a particularly bad year for the Windsor clan. I mean the real Queen, not Olivia Coleman or Claire Foy. Although I’m holding out for Imelda Staunton in Season 5. However, I believe even Her Majesty would allow that 2020 was worse than 1992’s three royal divorces, a castle fire, and a toe-sucking scandal.

Yes, we’re in for a scary winter. Kay-Kay and I just entered a new three-week lockdown in a two-room-plus-bath Airbnb guest cottage in Northern California. We’re also facing a 3,000+-mile return drive to Virginia in January. This includes traversing several states that have proven to be particularly COVID Delusional thus far. Still, things could be worse.

The blessings? Medical science has learned very quickly how optimally to treat those infected. That was the first flash of tunnel light, even if it wasn’t near the end. We’re not hearing terrifying stories about ventilator shortages because doctors know how to keep a lot of sick people off ventilators now. There are some drug therapies, although we could use a lot more supply. January looks to be when all the efforts at producing new, better, and more COVID tests will come to fruition, inundating us with millions of tests a week—a key to getting more schools safely open.

The Vaccines are Here 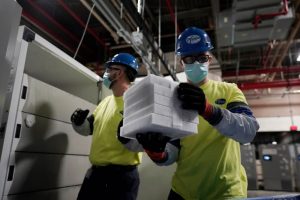 And there are those two big, beautiful, messenger RNA-licious vaccines that are shipping by the truckload even as I write. Forecasts are that by late June or July we’ll get the 70%-80% of the population either vaccinated or with antibodies. That’s when we achieve herd immunity. Six months away, folks.

We need one more push to get us there, a few more months of adult behavior. Let’s mask up, wash up, wise up, and when necessary lockdown. It’s not much to ask to get the kids back to school, protect the elderly, and get us all closer to a return to normality. Walk towards the light at the end of the COVID tunnel. Please.

My 92-year-old mother has been quarantined in her single nursing home room since April. Her meals are brought there, she’s had no visitors, and sees maybe a half-dozen staff during the day. She’s had her hair cut and set once in seven months. 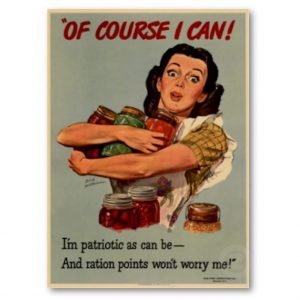 I asked her during a phone call a few weeks ago how she’s doing with all this. Just like she would’ve said when she was in high school during the Second World War, Mom told me, “This is something I can do at my age. Something I can do for the country, to help keep everybody safe.” Mom would probably start a scrap drive and sell War Bonds again if she thought that would help with COVID.

Be like Mom. We’re so close. We can see a flicker of light at the end of this long pandemic tunnel.