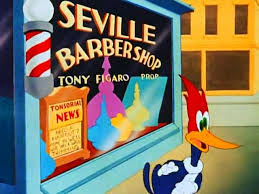 I’m not somebody who goes in much for collecting stuff. Don’t know why. I was only a half-hearted baseball card collector as a kid and I once made some very ill-advised trades to get a full set of the ’69 Cubs starting lineup. I suppose I kinda collect books, but KayKay periodically makes me purge the shelves for fear that our entire home decor will become Early Scribner. That said, I do have a small weakness for collecting particular Stuff That Hangs On Walls: cartoon animation cells. Specifically, Looney Toon animation cells.

Even as a young child, I sensed Looney Tunes were something quite different, a cut above. Now let’s be clear. There’s Disney, then there’s the rest of the mere mortals of the animation kingdom. I’ll confess that although I saw and mostly enjoyed every Disney film that came out—I still do—I was never a big fan of Mickey Mouse and his posse. I always found the voices quite annoying. And will someone please tell me what the heck is Goofy anyway? He’s no identifiable form of mammal. And was he supposed to be the first gender-neutral cartoon character or something? The anti-Betty Boop?

Looney Tunes were different. Whereas Disney was cool and smooth and lush, the Tunes were stark and brash and just a little gritty. And oh, the characters! The position description for every Looney Toon character includes, “Familiar with all forms of ah-ooh-gah horns. Misbehaves in outrageous ways at a high level of skill at least 51% of the time. Proficient in Microsoft Office.” At least I’m pretty sure. Well, maybe not that MS Office thing.

And the voices. To this very day, the two most soothing and melodious words to my ear are “Mel Blanc.” There was never anyone else like him and never will be again. Period. The sheer range of his voice characterizations is simply astounding, including of course my two favorites, Pepé Le Pew and Foghorn Leghorn. All you have to know about the raw talent of Mel Blanc is to recall that the voices of Yosemite Sam and Tweety Bird are the same guy.

But that’s not what I want to talk about. My son-in-law JD recently sent me an article that got me thinking. What I really want to discuss is how much classical culture we were surreptitiously fed by those devious animators.

Of course, the most obvious example of this is the timeless classic “What’s Opera, Doc?” directed by the greatest of the Looney Tunesians, Chuck Jones. Not only did Mel Blanc sing the voices of Bugs Bunny and Elmer Fudd throughout, Jones managed to give us all the really memorable musical highlights of Wagner’s epic four-part Der Ring des Nibelungen in exactly six minutes and forty-three seconds. The actual Ring cycle is 17 hours long and generally presented over three days, mind you. And Jones wedged in an entertaining ballet pas de deux between a homicidal (lepicidal?) hunter and a rabbit in drag. That’s ambitious. And be honest, is there anyone of a certain age who hears a snippet from “Siegfried’s Horn Call” and isn’t singing “Kill da wabbit! Kill da wabbit!” under his/her breath? Or in my case, at full volume, much to the the chagrin of my adult children.

Some boundary setting before we go any further. I still haven’t made up my mind about Disney’s acid-trippy Fantasia, so I’m giving that a pass for now, even though the guy who did the scoring

was from my hometown and wrote my high school’s fight song back in the 1920s. I’m also not talking about great music written for animated movies, of which there is a thick and distinguished songbook. (“Under the Sea???” Come on, how great is that?)

Incredible as “What’s Opera, Doc” is, it was hardly the only sneaky insertion of high art into animation. Another of my personal favorites is Woody Woodpecker’s marvelous, “The Barber of Seville.” This was pure comedy genius, marrying the chaotic pranks and just-to-the-edge-of-annoying voice of Woody with a classic Rossini opera. (Since I hear animation purists howling that Woody isn’t a Looney Toon character, can we agree he’s whacky and anarchic enough to be an Honorary Toon? I vote yes. And it’s my blog. I should note that Bugs also starred in a later Tunes version, “The Rabbit of Seville.”)

A few other of my favorites?

For better or for worse, there are a couple of generations of Americans who simply wouldn’t register a lot of these pieces of classical music if they hadn’t heard them in cartoons. I daresay a lot of these compositions wouldn’t even be on anyone’s “Most Recognized” list without their cartoon moments. That certainly includes my generation. I still get a little ripple of pleasure when I recognize a piece played at a symphony or sung at the opera I first heard Elmer sing or Bugs play when I was a kid. That was a great service by these animation studios, intentional or otherwise. Personally, I like to think the animators were just being cheeky and having a great time bending the rules of serious culture. But whatevs, right?

Television had some moments of great high cultural appropriation, too. My absolute all-time favorite has got to be an entire episode of Gilligan’s Island dedicated to producing a musical version of Hamlet, set to the music of Bizet’s much-beloved opera, Carmen. I freely admit that much of my adult affection for both the opera and the Shakespeare play is attributable to this 30-minute (with commercials) slice of cheesy ‘60s sitcom genius, masterminded by the immortal Sherwood Schwartz. Here’s a snippet.

It’s wonderful to ponder how these cartoons and other erstwhile mindless entertainment once had such a deep cultural conscience. I suppose they still do. When my kids were younger, I loved watching Pinky and the Brain with them, which snuck in some surprisingly sharp jabs at contemporary society. And of course, the best political and social satire being done today is found on South Park and The Simpsons and Family Guy. Still, the current stuff doesn’t seem to mine those same depths of our cultural heritage as the old ‘toons once did. But never say never. After all, we continue to produce new generations of masterful animators: Mike Judge, Seth McFarlane, Matt Groening, Trey Parker and Matt Stone.

I’ve just scratched the surface on the Wonder That Is American Animation here. I haven’t even mentioned the propaganda uses for which cartoons were recruited during the Second World War. For example, Woody Woodpecker’s “Barber of Seville” was made in 1944 and includes some outstanding war propaganda in the form of the “V-Haircut” and barber Figaro at his induction physical, leaving his shop to the comic ravages of Woody. So I’ll return to this incredibly rich and delightful topic in some future post(s). And of course, my all-time propaganda favorite is Bugs Bunny’s “Russian Rhapsody” with Mel Blanc’s unnerving cartoon Hitler speaking gibberish German and the oh-so-timely song, “Gremlins from the Kremlin.”

So what were your favorite cartoon classic culture moments? I know you have them—we all do. Please share in comments.