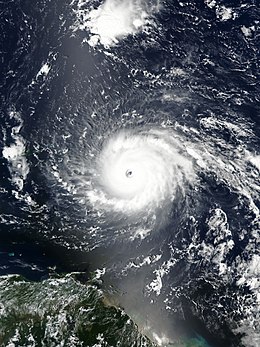 This was supposed to be a repeat blog post this week, drawn from my Extensive Greatest Hits, the reason being Kay-Kay and I were supposed to be cooking our tucheses on a beach in Costa Rica. This trip, I should note, was scheduled months ago. And routed us through… Miami. Yep, we got to join the zillion Floridians fleeing from Irma.

Let me start by saying we know we’re extremely lucky. As I write this, Irma hasn’t yet made landfall on the Florida mainland, but we’ve seen the destruction already. As of Wednesday, the island of Barbuda has basically ceased to exist. They’ve given up trying to salvage anything and are just removing whatever people are left there. Hard to imagine that level of devastation.

When I’m stressed or anxious and my mind goes to a happy place, it’s Long Bay Beach on the stunning, welcoming and laid back island of Tortola, the largest in the British Virgin Islands. It was devastated by Irma on Thursday. So was its American neighbor, St. John—which you can see from Tortola. And the entire Florida peninsula awaits.

So Kay-Kay and I are lucky travelers, for sure, being safe and sound and home in Virginia now. All we have is a little disappointment over a canceled tropical vacay and a some money lost.

It was all kind of surreal. We landed in Miami and the weather was beautiful—clear and a million, as we old aviators say. Planes coming and going blithely every minute. We probably should’ve known something was amiss after our third gate change. I’ll not mention The Airline, since we’re still trying to get them to refund all the frequent flyer miles we burned on these airfares. But let’s say we did not find them to be Paragons of Business Management.

Our departure kept getting pushed back in 20-minute intervals. Now keep in mind, we had a fueled and serviced plane at the gate and two pilots. Saw them arrive, so I know they were real. The problem—and what ultimately caused our flight to cancel—was The Airline couldn’t find three flight attendants. In all of Miami. Having just canceled 12,000 flights (literally). I heard this from an actual gate agent of The Airline, so I’m not making it up.

The other shoe dropped about 7:30 PM, not with a bang but a whimper. I happened to be glancing at the gate monitor when they changed the innocuous white-lettered “DELAYED” to a screaming red-lettered “CANCELED.” The gate agent got on the PA and said two sentences: “The flight to San Jose, Costa Rica, has been canceled. Please proceed to the Rebooking Desk.” <mike drop>

While Kay-Kay joined the hundred yard-long line, I found a wall outlet to plug in my phone, knowing this was going to require a lot of phone talk. I called The Airline’s 1-800 reservations number (which a text message told me to do) and learned the following:

– They’d be happy to reschedule us to San Jose on Tuesday out of Miami. Oops, sorry no seats. Mmmm, let’s see… we can get you there on Thursday. This would cut our paid-for 12-day vacation to four days. And I reminded the agent there was a Cat 5 hurricane heading for Miami.

– I asked the agent to book us on a flight to Anyplace Other Than Here, USA, and we’d try to work our way to San Jose from there. I was told every single flight departing Miami until the airport would be closing at noon Saturday was booked. I asked if we could at least be put on standby. The agent—whose voice had suddenly begun grating on My Very Last Nerve—said all the standby lists for every flight were closed, too.

With that, I hung up and got on Expedia, of which I’m a Double-Secret Special-Sauced Super-Duper Titanium Member because of all my business travel to China over the last five years. I immediately jumped on the first rental car I could book and just for giggles entered “Atlanta” and “tomorrow” as my destination info, not having any better ideas. Knowing that possession is nine-tenths of, well, just about everything, I figured we’d let the rental company know where we were headed once we figured it out ourselves. The app gave me a confirmation number, so we were at least wheeled up.

I thought we’d look for a hotel and figure things out tomorrow, seeing as how we’d been up since 2:45 AM. I entered a half dozen increasingly more northern Florida cities. Not one room. Then I entered Florida—again, not a single room. I tried Atlanta, Savannah, then Georgia—zip. The situation by then was solidly in the category of “Really Not Good.”

I retrieved Kay-Kay, who had by then heard the “sorry, no flights” news in an increasingly frantic game of Post Office (known to the rest of the English-speaking world as “Chinese Whispers”) that kept moving down The Evil Rebooking Line (known to the rest of the English-speaking world as “The Evil Queue”). We dashed to the rental car desk, stopping only long enough to buy a half-dozen overpriced bottles of water for our yet-to-be-determined journey. The Car Rental Company—who shall remain nameless as I’m trying to get money back from them, too—was very sympathetic. I said we really had no idea where we were going and the friendly agent said, “Drop the car anywhere. You just get out of Miami.”

And that’s what we did. Since we couldn’t find a hotel room as far north as Columbia, South Carolina, we decided to just drive home to Virginia. That would be 1,100 miles, one way. We departed the Miami International Airport at 9:15 PM. We arrived at our house in Williamsburg at 8:00 PM, 23 hours later. We drove straight through, along with what seemed every single one of the estimated 670,000 Floridians fleeing Irma, too. I’ve always hated Interstate 95, the road that runs from Maine to Miami. I now loathe I-95 with the intensity of 10,000 burning suns.

I’m happy to say that the eco-lodges we’d booked in Costa Rica gave us a 6-month rain check on our rooms and we were able to cancel the other hotels without charge. We hope to get down there sometime in the next few months—after hurricane season, thank you very much. We got a rather rude awakening when we dropped our well-traveled Volkswagen Passat rental in Richmond. The friendly agent’s “drop the car anywhere” came with a $480 fee, it turns out.

The Airline is trying to keep half the miles we burned on our airfares, having told us, “Well, somebody has to pay for those two legs you flew.” I pointed out that we truly had had no burning desire to a) have a really awful breakfast in the Philadelphia airport and/or b) get abandoned in the face of an advancing hurricane in Miami. Rather, we wanted to go to Costa Rica, which The Airline had conspicuously failed to accomplish. So we’ll see how that turns out.

But in The Big Scheme of Things, we made a miserable 23-hour drive and lived to blog about it. Many, many others aren’t so lucky. And Irma has a lot more destruction left in her.

There’s a ton of information on where you can donate for hurricane relief. What I haven’t seen much about is relief specifically for Barbuda and Tortola. Here are some bona fide charities, according to The Miami Herald. You can donate to Oxfam, a British-based organization already working relief for the Caribbean islands, including Tortola. Also, relief donations for Barbuda can be sent to the Antigua and Barbuda Red Cross.