In the Wink of a Young Girl’s Eye 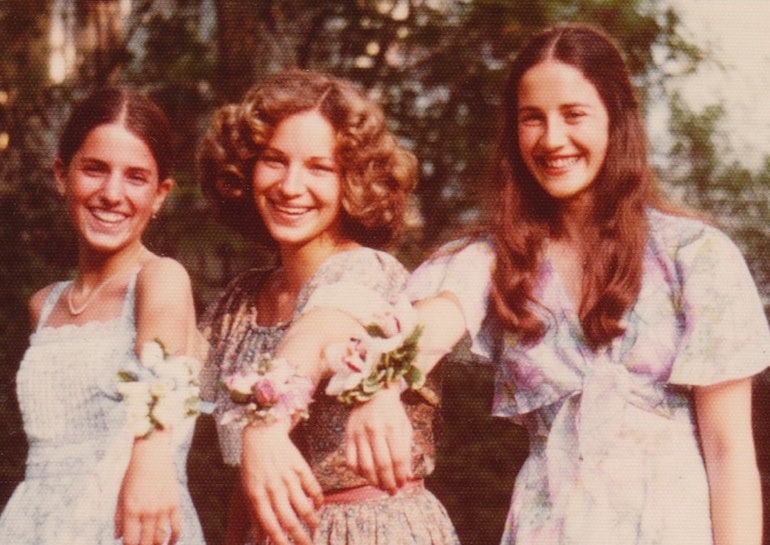 I was driving back from Trader Joe’s with my wife Kay-Kay a few days ago when she popped on the radio, just as a Springsteen song was cranking up. It was “Glory Days.” Ahhh… thanks Bruce.

They say the strongest memories are triggered by smells. I’m down with that. There’s a whole list of random smells that either overjoy me with intensely pleasant recollection or drag me kicking and screaming back to some nightmarish moment I’d really rather forget.

As an example of the first, my beloved grandmother always—and I mean ALWAYS—wore Estée Lauder ‘Youth-Dew’ perfume. I only know this was her brand because Estée Lauder didn’t have any other perfume in the ’50 and ‘60s, except for ‘Aramis’ and that was totally for dudes. Granted, not many women—or men for that reason—wear ‘Youth-Dew’ anymore, but when I experience a Rare Smelling of this timeless scent, I’m right back at Grandma’s kitchen table, chatting and smoking cigarettes with her. Back to a simpler and more carcinogenic time.

On the other hand, an example of the second? When I smell books—and libraries have a very distinctive smell—I’m right back in the Reading Room at Georgetown Law or over on Capitol Hill in the law stacks at the Library of Congress, sweating out my angsty 1L stress over the Dreaded Spring Brief and Oral Argument.

But I would assert there is something equally efficacious at triggering Thoughts of Times Past. (No, not lime tea and madeleines. One 7-volume ramble is enough for this historical epoch.) It’s That Special Lyric. You know which one I’m talking about. We all have one. Or maybe several.

Back to Kay-Kay and The Boss. There’s a line in ‘Glory Days’ I find so perfectly condensed and carrying such a truckload of meaning, that it squeezes my heart a little each time I hear it. It’s the phrase:

In the wink of a young girl’s eye.

This is as sublimely beautiful as “Gather ye rosebuds while ye may,” with apologies to Robert Herrick, who’s not in a position to defend himself online. Or anywhere else for that matter. I don’t associate these words or the song with a particular place or person, which may add to the impact. The visual image it conjures is poignant and pleasurable, so full of longing for younger days. At the same time, it’s a perfect metaphor for the inexorable passage of time and our own approaching mortality. Whoa, kind of a downer when you think about.

There are other snippets of lyrics that affect me almost as much. Here’s a weirdly esoteric one, in Latin:

This translates “Let us rejoice, therefore, while we are young.” Starting to see a theme here—time to reset my Geez-o-Meter. This is the first line of a really old university drinking song, which may explain a lot about me. In addition, “the Gaudie” is the all-purpose school song of the University of St. Andrews in Scotland, where as a study abroad student I first met Kay-Kay. There is, therefore, a most particular person, place and time associated with this Lyric Memory of mine.

Then we would cook cornmeal porridge / of which I’ll share with you.  From Bob Marley’s version of ‘No Woman, No Cry.’  This is such a homely, comforting, loving image. And also caught up in Smell/Taste Memory, having eaten some friggin’ great cornmeal porridge in Kingston while working there years ago.

But on a midnight watch I realized / why twice you ran away.  From Crosby, Stills and Nash’s ‘Southern Cross.’  This is such a pithy description of what insights can come during a nautical version of a Dark Night of the Soul—the midnight watch. Don’t miss that she ran away TWICE—what can that mean? And of course, more Smell Memory, since you can almost chew the salt air in this song.

Warm smell of colitas / rising up in the air. Speaking of chewing the air, the daily double! A potent Lyric Memory paired with a pungent skunky-weed Smell Memory! Come on, how many of us have experienced this on some Dorito-and-Little-Debbie’s-munchied road trip? Yes, I went there—‘Hotel California.’ Only The Eagles could have pulled off this lyric. (And I’m not buying Glen Frey’s unlikely story that it refers to some obscure desert flower. Or the more likely colitis, which would be decidedly more unsavory.)

He was born in the summer of his twenty-seventh year / coming home to a place he’d never been before.  I make NO APOLOGY for choosing a John Denver Lyric Memory—he’s vastly underrated as a songwriter. This snippet from ‘Rocky Mountain High’ speaks with great economy of words to a quintessentially American quality: the compulsion to reinvent ourselves whenever and wherever we feel the urge. We Yanks don’t know our place in life. (I’m telling you, Europeans don’t get this, not deep in their bones. Maybe the Aussies. And the Canadians. Definitely not the Brits.)

Rainbows, I’m inclined to pursue. It’s damn hard to pick just one Truly Awesome Lyric Memory from the entire Sammy Cahn-Frank Sinatra oeuvre. Or Johnny Mercer-Frank Sinatra, for that reason. But I’d have to go with this one from ‘Call Me Irresponsible.’ Just five words, but what a message. And lest we forget, Bob Dylan just won the Nobel Prize for, shall we say, somewhat parsimonious lyrics generally sung through his sinuses.

There will be no white flag above my door. To prove I’m not an actual dinosaur, how about this ear worm from Dido’s ‘White Flag,’ huh? Although it is 14 years old now, so maybe I’m a mastodon. The most memorable line from such a uniquely quirky love song, full of defiance and perseverance.

What’s the point to all this, other than my listening to some great tunes while writing? It’s that the human brain—the place where all our messy, random memories are stored—is a very peculiar thing. I think of it as a micro-version of that huge warehouse at the end of ‘Raiders of the Lost Ark.’ (The first Indiana Jones, not those ill-advised redux sequels—you listening to me, Spielberg???)  It’s possible, just possible, you might stumble across the Ark of the Covenant again by accident some day. If you set out purposefully looking for it? Probably not.

But stored deep in your brain, with a perfect Lyric Memory or even a nasty Smell Memory, you’ll find it again at the most unpredictable and inconvenient times. No sweat.

What are your Best Lyric Memories? Why do they stick with you the way they do? Do they tend toward pleasant or the tortured recollections?