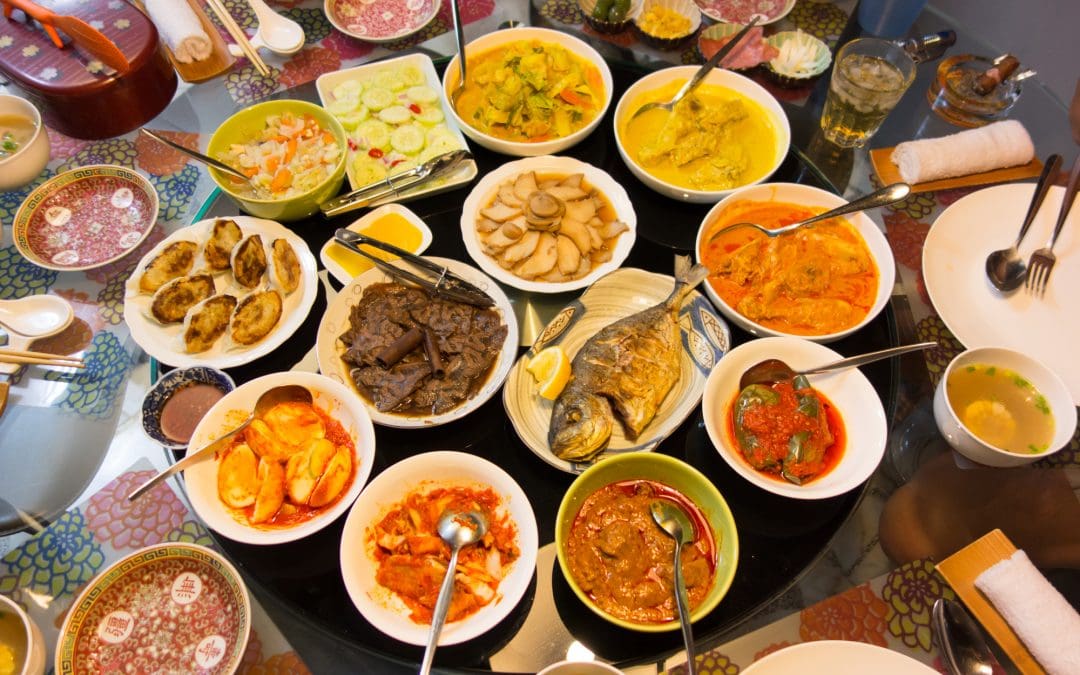 I spent a lot of time in China on business. By business, I mean spending a lot of time at law schools convincing deans to sign partnership agreements and students to spend a lot of money studying at the law school I worked for in New York City. And I mean a lot of money. Incident to all this work in China, I was the guest at a lot of working lunches and dinners.

For those of you who’ve never been to China, let me explain what a meal is like. Or at least a Chinese business meal. From an American’s point-of-view, one of the salient features is the complete unpredictability of how many courses are going to appear. This can cause a significant pacing problem. You see, when you’re the visiting guest, every dish must first be presented to you. In turn, none of your Chinese colleagues at the table will touch a dish until you’ve tried it. You’re the honored guest, after all. This presents two problems. 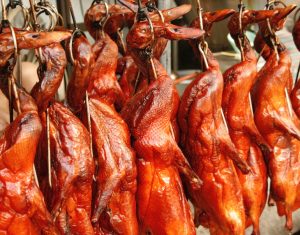 First of all, you better be a daring eater. By way of example, I was once presented a small platter that consisted of a deconstructed duck.  I’m not talking about the rightfully famous Peking duck that gets disassembled at the table and served with all kinds of yummy accoutrement. What I was presented were all the leftover parts of ducks. These consisted of duck wingtips, duck feet, and duck tongues. The wingtips were exceptionally crunchy — not surprising, given that all the wing bones were included, which I was expected to eat. I’ve consumed various kinds of animal feet before, so knew what to expect. But nothing prepared me for duck tongues. These are long and narrow, like a rubber band. Which exactly describes the texture and my inability to chew it in any meaningful way. In such cases, you just smile and swallow. This can be a little risky, since the Chinese don’t usually serve any kind of liquid with meals until the soup comes at the end.

The second problem is you have to find the sweet spot between eating just enough to show appreciation and not eating so much that you’re too stuffed to sample the eleventh or fifteenth or twenty-second course that comes out of the kitchen. (See, supra, no clue as to how many courses are being served.) The corollary to this second problem is that you must never be too effusive about any particular dish. This can be a challenge if, like me, you really like a lot of Chinese food. Here, there be danger. If you praise a dish too highly, it’s going to boomerang back to you immediately and you’ll be expected to heap more on your plate. Which takes us back to the aforementioned problem of eating too much before you know how many courses are coming. It’s a culinary minefield.

During one of these endless meals, I was suddenly struck, like St. Paul on the road to Damascus, with a blinding flash of the obvious. I realized that to all the other people sitting around the table, this “Chinese food” I was eating was simply “food.” Which later led me to ponder the whole notion of our American approach to foreign or ethnic foods.

Let’s face it, Americans are not very respectful of other people’s food ways. In general, when we find some particular dish in some foreign country that we think is tasty, the first thing we do upon importation is make it really, really big. This is one of the most common comments I hear from European or Asian friends about their visits to America — the plates are so big and the piles of food on them even bigger. Also, every building in America is way over-air conditioned, but that’s for another blog.

The Chinese food in America isn’t really food from China anymore, at least not the kind of food the Chinese regularly eat. Huge portions, lots of sauce, tons of rice, and more meat in one dish than you might find on an entire dinner table in China. In short, as with so many things in America, we take the nugget of a good idea and run with it to a ludicrous extreme. Although I’ll admit, I do appreciate that Chinese-American restaurants have those bottomless teapots on the table, just in case someone asked me to choke down a duck tongue again. You can never be too careful when it comes to choking hazards

I also lived in Italy for three years, so I know some Italian stuff, too. Italian food may have been the first ethnic food to undergo the Full American Treatment. Pizza, our usual gateway drug to Italian(-American) cuisine, is example numero uno. There is some argument about when and why Americans became so enamored of pizza. It appeared in American cities with some of the first Italian immigrants, but the hundreds of thousands of GIs who spent time in Italy during the Second World War—including an uncle of mine—brought back with them a taste for pizza. As a result, pizza parlors spread across the United States to every city and town. In my small Midwest hometown of Skeeterville, we had Maria’s Pizza, although Maria was a guy whose entire English vocabulary consisted of, “It’ll be about a-15 minutes.”

The thing is, American pizza bears very little resemblance to Italian pizza. I wrote about this in a blog a little while ago. Same thing applies to almost all signature Italian dishes. For example, Italian-American restaurants do not know how to cook pasta like real Italian restaurants. (I should point out that there are a handful of true Italian restaurants in America. These should be dearly treasured.) Pasta in Italy is never overcooked. If it’s not al dente, it’s not coming to the table. The average cooking time of pasta in most Italian-American restaurants is 25+% too long resulting in mushy, nasty pasta.

Same goes for sauces. In Italy, perfectly cooked (generally fresh) pasta is served with a modest amount of perfectly prepared sauce. Consider an archetypical Italian-American restaurant–let’s call it “Pimento Garden”–as my American counterfactual. “Pimento Garden” drowns its pasta in oceans of sauce. When you’ve eaten all the noodles, the plate is still swimming in sauce. This would never be the case in Italy. In addition, “PG” uses more garlic in one night than most actual Italian restaurants would use in a month. Let me assure you, garlic is not the dominant flavor in Italian cuisine—although you’d be hard-pressed to discern that from most Italian-American restaurants. No matter how many baskets of free breadsticks they throw at me. Personal opinion only—but my blog, my rules. 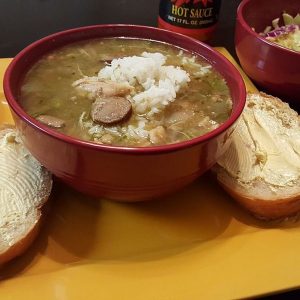 Since I spent most of my college years in New Orleans, I have decided opinions about the use and abuse of Cajun and Creole cuisine over the last few decades. Every form of protein was not meant to be “blackened” — a technique that’s a rather new addition to Cajun cooking that hadn’t made it onto menus during the time I lived in New Orleans in the late 70s and early 80s. Back then we just called it burnt. Gumbos have been diluted and denatured to within an inch of their lives, losing most of the layers of sophisticated and subtle flavors that make them such signature dishes to begin with. And as for some of the attempts at beignets undertaken by restaurants with kitschy Louisiana names? Well, those are probably best forgotten.

I could go on—Greek, Mexican, Lebanese, German. We supersize it, overcook it, over-sauce it, and generally remove most of the original flavor and soul.

I guess this begs the question, what do other countries do to American food? The hamburger is a good case in point. Okay, admittedly this is originally a German dish—hence the name—but come on, the appropriation is so complete we Americans can fairly call it our own. When I was a university student in Scotland, there was only one hamburger chain in the United Kingdom. This was the cleverly named but execrably executed Wimpy’s. Everything about a Wimpy’s hamburger was regrettable — the meat, the bun, the cooking, the condiments. Every last aspect was awful. Still, as an American, I’d break down once every 4 to 6 weeks and go buy a hamburger there. I would not gladly pay you Thursday for one of those hamburgers today. 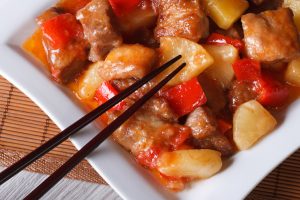 I guess the way to look at this is to abandon any expectation of authenticity and just go for generic tastiness. Hey, I love a big, super-sweet plate of deep-fried sweet-and-sour pork with chunks of canned pineapple floating in it as much as the next guy. But I no longer delude myself into thinking there’s much that’s Chinese left on the plate.