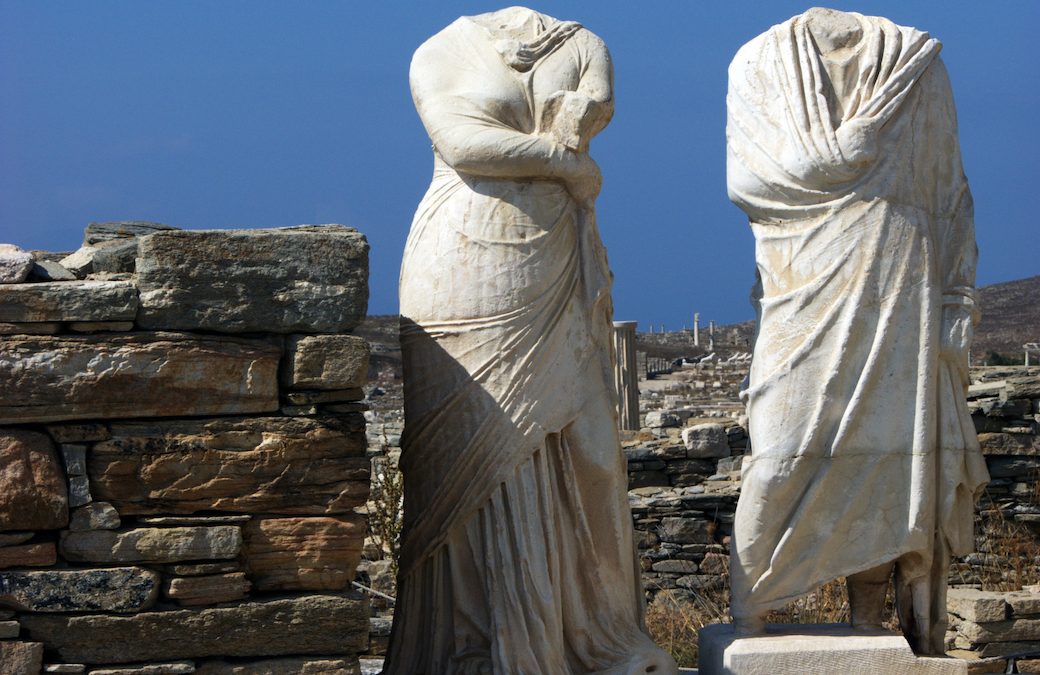 Feels a little strange, doesn’t it? Statues coming down all over America. Remember how we cheered when Iraqis pulled down every Saddam? Or a decade earlier how we huzzahed with democratic vindication as Stalin and Brezhnev and Lenin were consigned to the statuary dustbin of history? Good times. 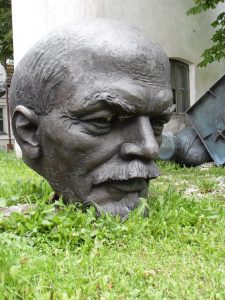 Kind of guessing the Russians are chortling at our expense now. Suddenly, we’re a nation of iconoclasts. That’s a word normally associated with its figurative meeting — someone who challenges cherished beliefs or venerable institutions. Assuming you read highbrow commentators like George Will or William F. Buckley.

A Short History of Toppling

But the literal iconoclasm we’ve been experiencing has a noble pedigree extending as far back as Bronze-Age Egypt. And how can we forget Moses? After camping on a windswept mountaintop waiting for Yahweh to chisel the rules, Mo’ dabbled in a little iconoclasm when he busted up that golden calf. The word itself derives from the smashing of icons—fancy painted images of Jesus and Mary and Various Unpronounceable Saints—that were all the rage in the Byzantine Empire. The increasingly ornate icons stoked a lot of counter-rage, leading to regular rounds of icon-smashing.

A little closer to our time—say five or six centuries ago—some of the more dyspeptic Protestants were quite ill-disposed to any kind of statue, fresco, or stained glass. A little too popish, you know. When Kay-Kay and I were students at St. Andrews in Scotland, I remember sitting in the University Chapel, St. Salvator’s, and noticing all the empty niches and alcoves in the medieval church, courtesy of John Knox and his notably humorless Calvinist followers.

An eleven-foot bronze statue of Pope Julius II that Michelangelo had created for the basilica in Bologna was pulled down by an anti-papal mob. So one of the few bronze sculptures created by the greatest artist of the Renaissance was sold off for scrap. 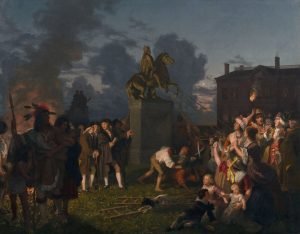 In July of 1776, after the first public reading of the Declaration of Independence, the local Sons of Liberty rushed over to the Bowling Green in NYC and pulled down the gilded lead statue of King George III, who ended up melted down into musket balls for the Continental Army to fire back at the King’s troops.

But de-statue-izing is not something we Americans associate with ourselves. It’s something those Crazy Other People—like the French—engage in. But here we are, so let’s talk about where we go from here.

There’s an odd contradiction to public statues. Whether stone or bronze, statues have a heft of permanence about them. In their very solidity, they imply they’ve been there forever. The reality is often quite different. 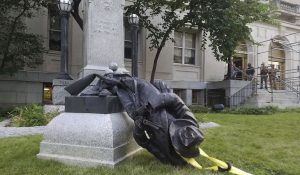 The vast majority of Confederate statues were not erected until 40 or more years after the Civil War. Turns out a surprising number of the bronze Confederate soldiers sprinkled liberally across the South were turned out like model T’s from Yankee foundries. They were not, shall we say, high art.

But the seeming permanence of the statues belies their malleable meaning. Most of the Confederate memorials were erected primarily as a representation of white supremacy in the former Confederate states. Was there a collateral desire to memorialize fallen uncles and fathers and brothers? I’m sure there was. It just wasn’t the main purpose of the wave of statue erecting.

Over time, particularly after the civil rights movement ended the most blatant aspects of Jim Crow racism, the statues were woven into the nostalgic fabric of many towns. We’ve all heard the statues are about “heritage not hatred.” I’m not doubting that some epically misguided people cherish their family’s Confederate past.

Another example of shape-shifting interpretations of public statuary is Christopher Columbus. Many Columbus statues were erected by Italian-American groups as a visual announcement that they contributed to the Great American Story from the beginning. This was a clever move by a much-reviled immigrant population, a bold attempt to claim American-ness. 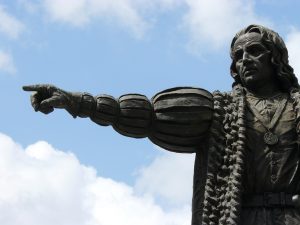 But Columbus has proven a particularly slippery American icon. The big hook for Columbus was he “discovered America” for Europeans. Over the last 50 years or so, the European colonization has come to be viewed through the plight of the Native American population that was at best displaced and at worst destroyed by the arrival of wave after wave of white Europeans.

Columbus enslaved indigenous peoples to work the mines of the New World and allowed unspeakable cruelty by his men, including unpunished murders and rapes. Within a few years of his settlement of Hispaniola, the native Arawak population had been halved, disappearing entirely by the 17th century. And the very reason we venerated Columbus in the first place turned out to be false. It’s now a well-settled fact that Leif Erickson beat him by 500 years.

So it’s not all that surprising Columbus gets a fresh coat of graffiti in New York City or ends up dismembered at the bottom of Baltimore Harbor.

There has, however, been some unfortunate spillover from our recent spasm of iconoclasm. It’s inevitable that once you spark collective emotions there will inevitably be excesses. 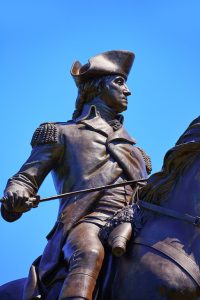 Some have called for the toppling of George Washington and Thomas Jefferson because they were slave owners. There have been demands that the Emancipation Memorial near the Capitol in Washington be removed because it features a (standing) Abraham Lincoln and a (kneeling) recently freed slave. The Occupier of the White House’s favorite predecessor, Andrew Jackson, has sparked controversy because of his well-documented history as a genocidaire, expelling or exterminating much of the Indian population of the American Southeast by sending them West along the heartbreaking Trail of Tears.

So how do we draw the line? Who stays and who goes?

Some are easy. In my (Yankee) opinion, prejudiced by the fact my ancestors fought in Union blue, there is no place in the public square of any American town or city for statues venerating traitors. I live 45 miles from Monument Avenue in Richmond, so this is literally close to home. Much as I learned to respect the military genius of Robert E. Lee during various rounds of professional military education during my years in the Air Force, he was a traitor to his nation. And he was well aware of it, very cognizant of the choice he was making, and after the Civil War stated there should be no memorials to him.

Lee was right. So away with the racists and traitorous Confederate memorials. They were erected for nefarious purposes, they represent a wretched period of institutionalized racism during the Jim Crow era, and serve as a daily visual offense to African-Americans. There really is no room for argument.

That leaves us with more perplexing figures like Washington and Jefferson, Teddy Roosevelt and Junípero Serra. In short, there must be a balancing test. The courts do this all the time in other contexts so it’s not too hard. The balance that needs striking is to look at the historical figure’s entire body of lifetime achievement. What did they contribute to advance noble and good causes like democracy and justice? What did they accomplish that we should hold up for admiration and emulation? 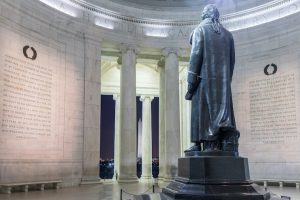 It’s beyond dispute that Jefferson, for example, owned hundreds of human beings during his lifetime. It’s too easy to dismiss this fact by simply stating he was “a man of his time.” Jefferson himself admitted to the immorality of slavery in his copious writings and periodically agonized over his participation. But he did nothing to change that during his lifetime. On the other hand, it’s equally indisputable that Jefferson made incomparable contributions to the establishment and advancement of democratic institutions, not just in the United States but worldwide. He ensured America’s place as a continental power with the Louisiana Purchase. It’s difficult to make the case that because he, like thousands of other Virginians, engaged in the practice of human chattel slavery that all the good he did that lives long after him is unworthy of honor.

The same analysis can be done with any of the Founding Fathers. Washington is equally contradictory, but again the indispensable presence of Washington in ensuring the throwing off of British rule and the survival of the newly constituted Republic in its earliest tender years outweighs his despicable ownership of human beings in which he willingly engaged.

Washington stays, too. But like Jefferson, he should be contextualized. We must readily admit his failings, first and foremost, in the purchase, sale, and ownership of human beings. It’s a disservice to the legacy Washington sought to bequeath us that we not examine his failings as well as his triumphs. Neither Washington nor Jefferson, Madison nor Marshall believed slavery was something for which they should to be lionized. They admitted during their lives that the Peculiar Institution needed to be ended or that it would inevitably collapse under its moral contradictions. But they did nothing to force that end. 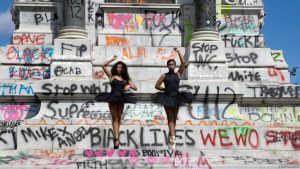 There are many individuals who will present difficult cases at the margins. And I adamantly favor these decisions being made through open and frank public debate rather than in the heat of protest by a raging crowd. However, I also understand the bottled-up rage that’s finally popped its cork. “How long, how long?” is an honest question for a nation that has yet to fully atone for its original sin of slavery.