I Can’t Hate Hemingway. Or My Grandmother. 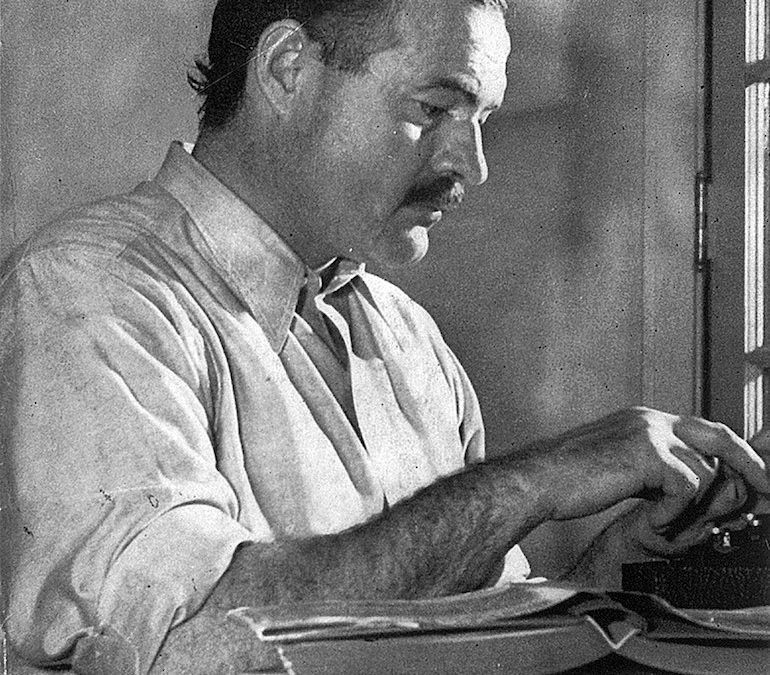 My Big Sister thinks I should be ashamed to admit this, but I love Ernest Hemingway. Sissy reminded me just the other day that Papa H was a Misogynist Racist Anti-Semite Hyper-Machismo D-bag (with an actual capital ‘D’).  All true, sadly enough.

I love him anyway.

The easy way around Hemingway’s patent failure as a decent human being is to say something like, “He was just a man of his times.” (This is the same as the whole “sure he wrote the Declaration of Independence, but Thomas Jefferson also owned slaves” unpleasantness.) But fobbing off these kinds of Really Serious Shortcomings isn’t very gratifying in the Big Scheme of Things. After all, Hitler and Torquemada were ‘men of their times,’ too.

Maybe I should say something about how me and Hemingway got so tight.

I borrowed (meaning stole) my oldest brother’s copy of The Sun Also Rises when I was a precocious twelve-year-old, on the threshold of a rather routine Troubled Adolescence. Of course, as is the way of things, I convinced myself that everyone else’s adolescence was exactly the same, but mine was Utterly and Tragically Unique. Hemingway got me through it.

I was the youngest of four and my parents were worn out by the time I hit puberty. I was a good student, which lulled them into a false sense of complacency about nearly everything else, so they mostly left me alone. On the other hand, my two older brothers were, well, challenging. The eldest found my existence as Little Brother highly annoying and ignored me completely. The other, only a year older than me, loathed me with the intensity of a thousand burning suns. And he liked very much to remind me of that. Every. Single. Day. Dad struggled with issues of his own, so he was a benignly neglectful presence. As a result, I was kind of at sea as far as the whole Becoming A Man thing went. Into that vacuum rushed Papa H, for better or worse.

In hindsight, he and his characters might not have been altogether the best of role models, but he could sure tell a darn good story. I was old enough consciously to loathe his racism and anti-Semitism, but his misogyny, a word not au courant in the early ‘70s, floated below my radar. I did manage to figure it out in later years (‘misogyny=bad’) otherwise it’s very unlikely I’d have gotten a second date, let alone a wife.

I devoured The Sun Also Rises, then read it again. And again. This book, mind you, is perhaps Hemingway’s worst for N-wording and anti-Semitic slurring. Next, I rummaged through (meaning pillaged) my brother’s bookshelves and found For Whom the Bell Tolls. It took me two times through before figuring out what “fornicate you and the horse you road in on” actually stood for. There was no F-bombing allowed in the ’30’s, so the book is filled with “fornicate this” and “fornicating that.” It was a simpler time. I have worshipped the hero, Robert Jordan, ever since. Even in his somewhat puzzling Gary Cooper incarnation.

Dad mentioned one day in his usual offhanded way that this Hemingway guy was Sort Of Famous and had written Many Great Books. (N.B., Millennials: The Google had not yet been invented.) Ecstatic at this news, I borrowed or bought every Hemingway book I could find. (N.B., Millennials: The Kindle and The iBook had not yet been invented. These were actual books made out of trees.) I sat hour after hour in a big cloud of testosterone, wallowing in all that beautiful spare prose and manly hairy-chested-ness. I mean, The Old Man and the Sea? Snows of Kilimanjaro? The Nick Adams Stories? And although Bradley Cooper hated the ending so much he threw it out the window,  A Farewell to Arms? Am I right? Of course, he had a few swings and misses. His only play, The Fifth Column, is maybe just a notch better than his awful poems. And don’t even bother opening Across the River and Into the Trees, even if you could find a copy. Yikes.

During a delusional moment in 2008, I agreed to run a criminal justice reform project for a year… in Baghdad. For diversion from the Random Rockets and Mortars, I reread Hemingway’s entire oeuvre—even his execrable poetry. This was when it really hit me how much I loved this writer even though he was a Horrible Bigot, a Rancid Anti-Semite, and an Unapologetic Misogynist. I found I appreciated him even more as a somewhat terrified (see ‘Rockets and Mortars’ supra) Full-Grown Adult.

And that most definitely made me go, “Hmmm…”

Coincidentally, my beloved grandmother, gone these many years, was born in 1899, the same year as Hemingway. I loved her dearly and can hardly look at her picture without choking up to this day. It’s an Irish thing. Home for Christmas my first year of college, I went to see Grandma. We sat around her kitchen table, drank coffee, and smoked cigarettes. It was a simpler time, when grandparents and grandchildren bonded over carcinoma risk. I mentioned I was dating a girl at school. Grandma asked her name, which was anglicized but still vaguely Russian. Grandma’s head snapped up, “Is that a Jewish name?”

What followed were several memory-searing minutes of Grandma railing against All Things Jewish. No need for details, just assume the standard horrible stereotypes were right there, splattered on the table in front of me. Thing is, I had no idea until that moment—not a clue—that my grandmother was, as Woody Allen said of Grammy Hall, “a classic Midwest Jew hater.” It shocked the hell out of me. Nevertheless, after digesting this for a few days, I realized she was still my grandmother and I still loved her dearly, now warts and all. At nineteen, I was able to shrug off the obvious moral contradictions contained in the previous sentence.

Maybe nine or ten years ago, I was watching James Carville on TV. You remember him, Bill Clinton’s maniac, angry Cajun, ex-campaign manager? The guy who said, “It’s the economy, stupid.” (He always reminded me a little of a bald-headed Yosemite Sam.) I saw him interviewed on some news program or other—who can even keep track anymore—and he related a very similar story about his old granny down in Louisiana. He recounted that she had never in all the years he knew her referred to an African-American person by anything other than the N-Word. He then said without apology, “And I loved her to death anyway.” I hadn’t thought about my beloved, long-departed Grandma’s anti-Semitic rant for a long time until I heard Jimmy C make this admission. It gave me the excuse to reexamine my own troubling memory. But you know, I still cry when I run across a picture of her and I still miss her very, very much.

Most of you get this. Everyone has an Uncle Jasper at Thanksgiving running his ignorant yapper after his fifth PBR. Everybody knows, likes or loves someone who holds ideas or has done things they abhor. I spent some years as a criminal prosecutor and was endlessly fascinated by parents of defendants, some of whom had done pretty awful things. During breaks in the trial, mom and dad hugged and kissed their kid just the same.

People are inherently flawed vessels holding a jumble of wondrous kindness and irrational meanness, tender mercies and awful words. That’s a fact. (News flash: that includes you and me.) That doesn’t in any way make awful ideas or boorish behavior OK. It only means that many otherwise good people—including some of the people you might love most dearly—often do and say some awful things. Including Grandma and Hemingway. That doesn’t mean you have to stop loving—or forgiving—them.

So who is your most notorious racist uncle/aunt/sister/grandfather/cousin? I can’t be alone here, am I?