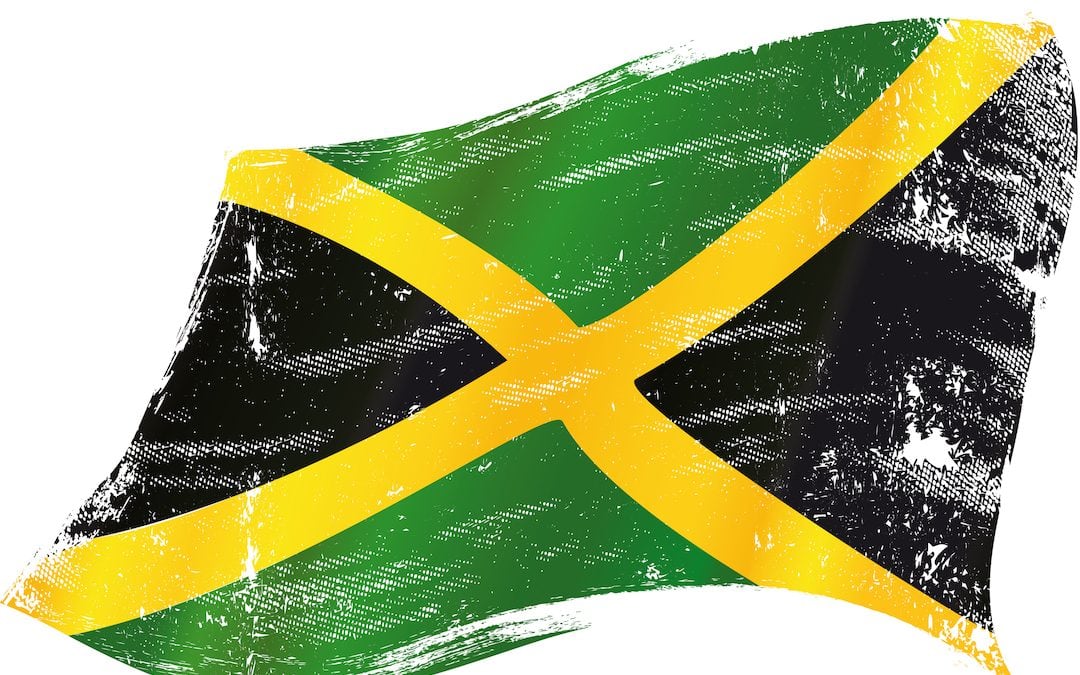 This week, I’m going to add to your bucket list. I’ll give you a minute to fetch pencil and paper. <Pause> Now write this down — 56 Hope Road, Kingston, Jamaica. That, my friends, is the address of Robert Nesta Marley. I’ve been there three times. Because once is decidedly not enough.

How did this happen, I hear you ask? It turns out in the six months back in 2011 when I was between leaving a job as a partner in the consulting company I’d founded and starting a new gig as an assistant dean at St. Scoobius Law School up in NYC, I did some freelancing as an international development consultant. This consisted of spending three of those six months working on a project funded by USAID in Kingston. This after spending a month knocking around Ireland.

Okay, I get it. There are many worse places to be sent for three months. Having spent the previous seven years doing international development work in decidedly less balmy and/or laid-back locations like Albania and Iraq, I was perfectly content to set up camp at the Wyndham Hotel in a well-appointed room with a spacious balcony. They also had the most amazing Red Velvet cake in the lobby coffee shop.

For the first four weeks of this most excellent gig, I was accompanied by my dear wife, Kay-Kay. While I helped set up the Independent Commission established by the Jamaican Parliament to investigate police shootings, Kay-Kay got to wander Kingston. Or lounge around the pool.

Kay-Kay being Kay-Kay, she quickly befriended the 60-something jolly dreadlocked herb man who meandered on his bicycle around the main entrance to the hotel and very pleasantly offered to sell us weed every time we came and went. He was extremely pleasant and very affable. Kay-Kay always asked him how things were going and had a nice chat. When he invariably offered to sell her some tasty Blue Mountain ganja, her standard smiling response was, “I’m good for now. But when I need more, you’re my guy.” [Editor’s note: Kay-Kay does not in fact use marijuana.]

So on one of our weekends in Kingston, Kay-Kay and I decided to take the Bob Marley House tour. I liked it so much I went back two more times after she left. What else was I going to do on a lazy Saturday in Kingston? Other than eat great jerk, lounge around the pool, and have my hundredth piece of Red Velvet cake. And, of course, it’s Bob Marley’s house. 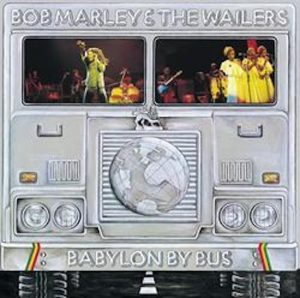 I confess to a long and abiding love for the peerless music of Bob Marley and the Wailers. And of course, his backup singers, the I-Threes. Coming from Skeeterville, a small town 100 miles from anything interesting with a population so demographically homogenous that we Irish Catholics had to settle for discriminating against the Slovak Catholics. As a result, I had never heard of Rastafarianism. I certainly couldn’t have spelled it. That is, until I went to university in that polyglot melting pot of New Orleans, a city with a substantial number of West Indians of the Rasta variety. And that is when I first encountered Bob’s remarkable live album, Babylon by Bus. I grooved out two copies of that album over the next three years.

Bob spoke to me. His Rasta reggae was compellingly danceable — even if you weren’t much of a dancer. Since the statute of limitations has long since run and this occurred before I had any thought of joining the Air Force, I will admit that the large amount of marijuana I smoked along with Bob’s music helped with the dancing. But really, it was the words and that voice, rounded out by the rich harmonies of the I-Threes. 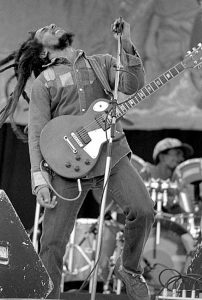 It was a revelation to me. Beneath those infectious beats, Bob told stories of discrimination and equality, of poverty and hope, of loss and redemption. And of course, always to the greater glory of Jah Ras Tafari, His Excellency Haile Selassie, Emperor of Ethiopia. It came as something of a shock to me that Rastafarians believed in the divinity of an African Emperor who was strangled in his bed after a military coup in 1975. After pondering this over several Bob Marley tracks and an equal number of bong hits, it struck me that this was no less probable than a lot of other religious foundation stories. I mean, the Latter-Day Saints grew out of Joseph Smith mumbling into a top hat. And if I’d been credulous enough sign on to the stories of various saints upon which I was quizzed for eight years of Catholic school, what’s not to believe about Haile Selassie?

Thinking back now, it seems almost unbelievable that Bob Marley died during my senior year of college. At the young age of 36. But man oh (Rasta)man, has his music lived on. 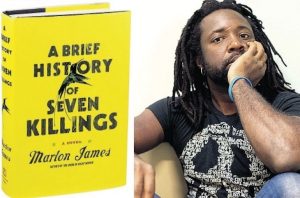 Bob Marley’s house on Hope Road in Kingston—gifted to him by Chris Blackwell, the owner of Island Records—is an airy and comfortable place about the size of your average McMansion and set in a tropical garden. The tour guides are all young Rastafarians of course. Not all of the house is open since the family still owns it. Various members stay there off and on. There’s a recording studio as well, in which some of Marley’s eleven children have cut album tracks. We were told by one tour guide that Lauryn Hill, the longtime (but now ex-) partner of Marley’s son Rohan, had also recorded there. But there’s still plenty to see, including Bob’s bedroom and the back porch where he escaped a 1976 assassination attempt two days before the historic “Smile Jamaica” concert organized by Prime Minister Michael Manley to calm the political violence tearing apart the country. Marley was shot in the arm and chest, but still performed—with a borrowed back-up band, since The Wailers were all in hiding after the shooting. A lightly fictionalized version of these events features in Jamaican author Marlon James’s Booker Prize-winning novel, A Brief History of Seven Killings. The bullet marks are still visible in the wall.

Of course, Bob Marley will be forever associated with the hearty consumption of marijuana. On one house tour, a young guide stopped us in front of a large poster-size image. It depicts a black-and-white head shot of Bob Marley, dreads hanging over his shoulders and his head wreathed in a thick cloud of pot smoke. The tour guide said, “Here we see a picture of Robert Marley enjoyin’ one of his favorite tings — the ganja spliff.” Indeed.

As we were walking down the garden path later in that tour, we went by a gate that read “Employees Only.” As we passed by the entrance of what I assume was the staff break room, the unmistakable smell of marijuana wafted out from behind the fence. The Bob Marley House must rank very high in employee satisfaction. Heh, heh, heh. 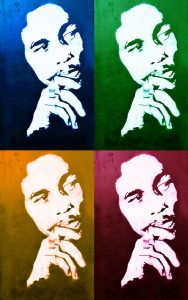 Although Rastafarianism is considered a black religion, Bob Marley was remarkably colorblind. In a short film they show at 56 Hope Road, Marley said, “I come from black. I come from white. I’m one, I’m the other, I’m both.” (His father was a 60-year-old white English overseer of a plantation in Nine Mile, Jamaica, and his mother an 18-year-old black Jamaican woman.) On one visit, after viewing that short film our tour guide led the whole group in singing a verse or two of “One Love.” Quite a tribute to Mr. Marley.

40 years on, I’m still a huge Bob Marley fan. His posthumously released multi-multi-platinum album, Legend, is always near the top of my iTunes library. I often listen to that album as I’m getting ready for lectures in the college courses I teach. Since my iPhone bluetooths music directly into my hearing aids, I groove to Bob with a placid smile on my face while walking through the bustling students rushing to their next class. Makes them wonder what I’m thinking. And they should. 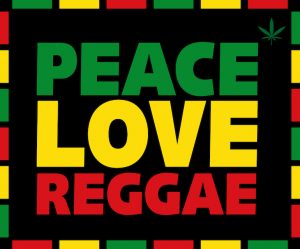 But in the end, it’s all about the music, isn’t it? If you don’t believe the live recording of “No Woman, No Cry” is one of the most beautiful love songs ever performed, you should check to make sure you still have a heart. During the Arab Spring, crowds of young protesters marching the streets of Tunis sang “Get Up, Stand Up.” And “One Love” is such a perfect distillation of all that’s best in Jamaicans, the tourist board adopted it as the theme song for a long-running marketing campaign.

Because of his untimely death, Bob Marley will never grow old. And because of his incomparable talent, neither will his music.

[No Hero’s Welcome, the final volume of my First World War and 1920s Sweet Wine of Youth historical fiction trilogy is now out. You can find all three of my novels here .]