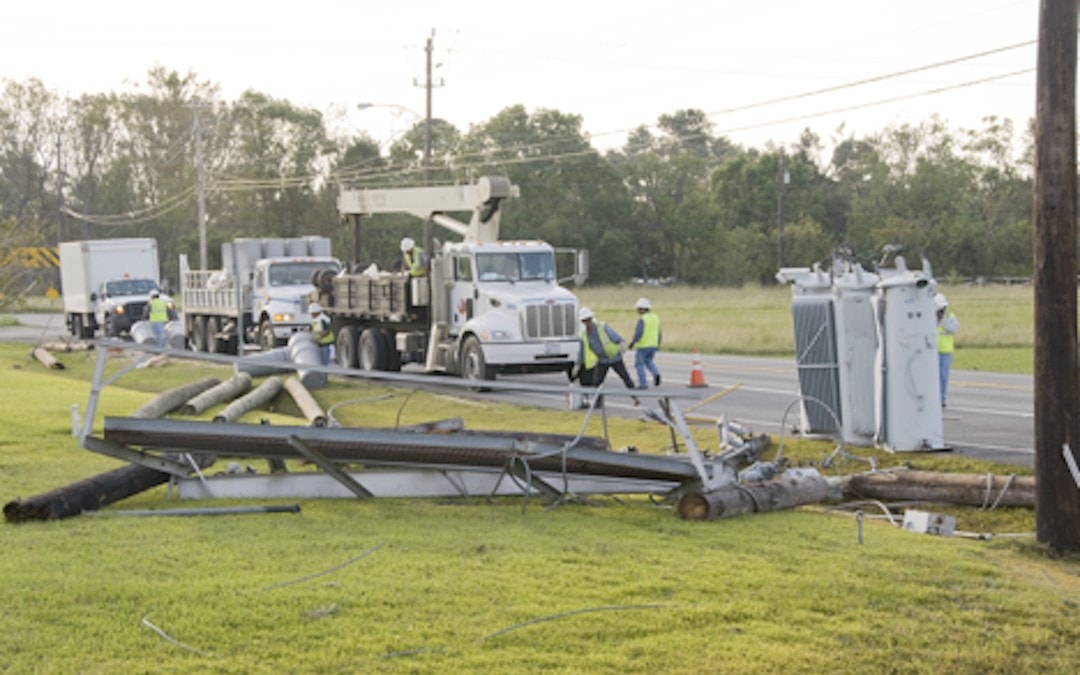 Whether due to climate change or supremely bad luck—like those people that live in “100-Year Floodplains” and find their houses underwater every three years—we’ve had our second multi-day power outage in the last two months here on The Peninsula. This being the Commonwealth of Virginia—and don’t you dare say “State”—we rightfully assume everyone everywhere knows which of hundreds of possibilities that peninsula would be. Because, you know, colonial things and Many Old Presidents and such. 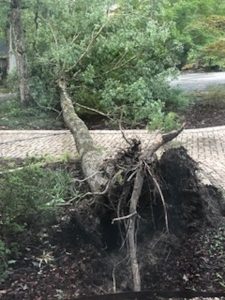 The first of these blackouts came from the ragged ends of Hurricane Michael that crept up the Appalachians, then hung a right somewhere over North Carolina. We had no electricity for three days after that soggy visitation, mostly because Mikey’s Rather Strong Winds deposited one of our lovely white oaks directly across the driveway and halfway into the road. With the electrical and fiber lines beneath it. In an act of karmic hilarity, we had just the month before spent a zillion dollars getting that particular tree pruned of all sorts of dead bits and bobs, fertilized, insecticided, and deep-tissue massaged. This was the moment I discovered that tree surgeons actually make more money than human surgeons.

Our grandson Goober was staying with us at the time of that first blackout, his parents—my daughter Peanut and her husband—being off in Italy for 10 days of excellent gelato and people talking at them with their hands. We therefore had to show stiff upper lips and keep our chins up and all manner of anatomical idioms so as not to freak out our little Goober. So we told him we were “house camping.” He’s only three, so he bought it.

Bless that age, they’ll believe anything an adult tells them. Which has presented me with many moments of temptation that would no doubt have left poor Goober emotionally scarred for life, but for my wife Kay-Kay’s eternal vigilance in dissuading me from telling him many kinds of Age Inappropriate Things. “Dissuading” as in threatening to drain the bank accounts and leave me for a much younger and better looking guy should I not shut my piehole.

The second of our bimonthly blackouts was just last Sunday. I had a writing seminar to teach over in Norfolk—which for reasons lost in the mists of time is pronounced “Nor-fuk,” “Naw-fuk,” or “Nor-Fik.” When I left Billysburg—which is what we amusing locals call Williamsburg, for more obvious reasons—we were having a lovely Currier & Ives light snowfall, which as I drove down The Peninsula turned to 100% rain after 12 miles. It was pouring rain in Nawfuk, 45 miles away. 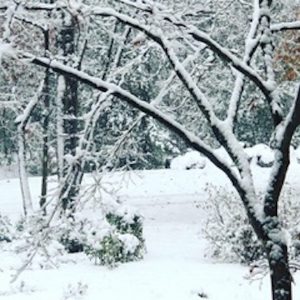 Not so upon my return voyage. The rain turned to snow again about 12 miles out, but the light and fluffy snow had turned wet and heavy and nasty. Having grown up near Chicago, it was of a pernicious quality we referred to as Lake Effect Snow. All you need know for our purposes today is this snow has the density of Uranium-235. We only got four or five inches, but with tree branches snapping from the weight of all that rare-earth-element snow, 75% of the area lost power. I should point out it was also 30 degrees colder than those powerless but balmy October days of Hurricane Mick.

[Public Service Announcement: Williamsburg in the Commonwealth that is Virginia is an actual place once the capital of said Commonwealth. That Other Williamsburg is a mere neighborhood of Brooklyn, without its own mailing address and composed of laughably overpriced houses made of brown stones filled with hirsute hipsters and their indie-bred spawn in fair-trade unbleached cotton onesies. This nefarious locale only exists to garbage up Google searches for the real Williamsburg that is my home. We now return to our regularly scheduled blogging.]

These recent Weather-Related Experiences have given me fresh perspective on the whole notion of being Off the Grid.

Let us start with the reality of the two types of Anti-Gridarians. First, there are Google millionaires and the hipper investment bankers whose idea of “off the grid” is a $15 million lake house with a deep water well, twelve wind turbines, a hectare of solar panels, a barn full of high-capacity lithium batteries, and their own backup nuclear power plant. Well, at least Elon Musk must have his own nuclear reactor, right? In these cases, “off the grid” is exactly equivalent to “I don’t pay utility bills or sewer taxes like you peasants.” 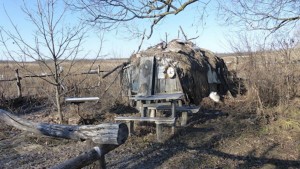 Second, there are those hard-core Off-Gridites who seem to cluster in Alaska and Montana. When not living in one-room shacks while writing manifestos and mailing bombs, these hearty souls reclaim the pioneer lifestyle and survive off the land as much as possible. It is my observation that a disproportionate number of these people either die of exposure or are eaten by bears. And occasionally are shot at by federal agents.

With the power out, our experience was closer to diehard off-gridding than the tech zillionaire faux version. In addition to having no electricity—with a concomitant loss of WiFi—our house also sits in a kind of cell coverage donut hole, begrudging us never more than two bars. And that only when the barometer is rising and the moon is in Virgo. We generally make phone calls through web calling—except that the World-Wide InterWeb of Things and Stuff is irrevocably tied to that plug going into a wall socket. Suffice it to say we got almost no data, mostly random spurts of emails with attachments stripped. We therefore had no electricity and very little connectivity of any sort.

Initially, there is something very centering and calming about data-restricted blackouts. It’s like a digital fast, where you purge all the awful Twitter vibes and creepy personalized Amazon ads from your life. By necessity, your mind turns to more primal things. These include getting a fire going in the wood stove to keep from freezing, while noting how Very Little Firewood you have in your side yard. Also rescuing several hundred dollars worth of organic grass-fed meat in your freezer by jamming it all in a cooler and burying it in backyard snow. Then hoping raccoons can’t smell frozen hamburger. 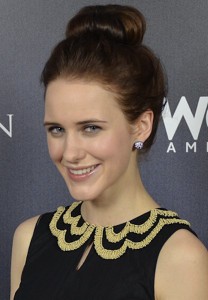 Nighttime is great though, since you get to light a lot of candles. And everyone looks better, slimmer, and younger in candlelight, so there’s that. Well, it’s great as long as your Kindle battery doesn’t run out. And I did catch myself starting to seethe over not being able to watch the new season of “The Marvelous Mrs. Maisel” that had just dropped on Amazon. But come on, give me a mulligan on that—I mean, Rachel Brosnahan.

The sudden shock of no instant access to Everything Ever Created by the Minds of Humans, as well as no Cute Cat Videos, is almost dizzying. But each quotidian task becoming noticeably harder is a rather good thing, in my opinion. We’re forced to fall back into our own thoughts. We’re spared all the beeps and squeaks and boops from our Many Electronic Devices. Including Kay-Kay’s highly annoying text message “bing!” sound. A preemptive confession: if someday I disappear and you find Kay-Kay buried in the crawl space, it will be because of her text message notifications.

At first, it’s all too quiet. When you think about it, we’re almost never entirely free of mechanical sounds. Even sitting in the living room, all alone in the house, with a good novel and a mug of Cubby Wubby Womb Room, there are still lots of sounds—the refrigerator humming and burping, the heat or AC coming on and going off, cars driving by the house. Or if your wife is particularly evil, she threw a load in the dryer before heading off to her Feminist Power-Read Book Club. And that load includes kids’ Oshkosh B’Gosh overalls with those brass fasteners—clickety-clackety, clunk, clink, clickety-clackety. I really need to get over that. 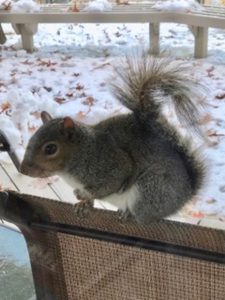 In our recently blacked-out state, I noticed it’s still not quiet. But it’s a very different kind of not-quiet—tree branches creaking, wads of snow plopping to the ground, squirrels pattering over the roof. Somehow those don’t classify as noise to me. More like hearing the Earth’s heartbeat. I put it right up there with seeing the Milky Way—a regrettably rare experience now, too.

Besides a wood stove, we have a gas hot water heater and range. So all in all we made out OK. Nevertheless, now equipped with a data sample of two recent blackouts, I can authoritatively state the quaintness fades rapidly after exactly 24 hours.

But the occasional weather-induced blackout is perhaps a good thing. It’s Mother Nature’s way of showing us how thin the veneer of all our techno-sophistication truly is. And it’s also Her way of reminding us who, in the end, is really in charge.