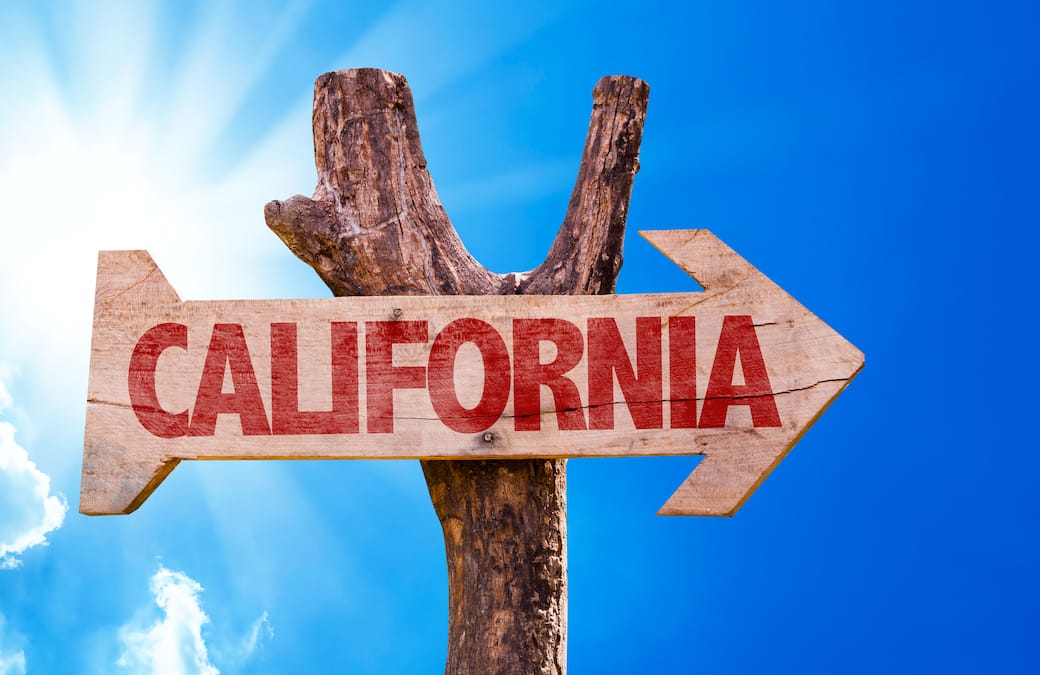 Don’t know if your Nuclear Family Unit—and now Pandemic Bubble Crew—is like mine, but when my wife, Kay-Kay, and I are coming up on an automobile trip, various Piles of Stuff start appearing. On the bathroom vanity, just inside the door to the garage, on the dining room table. It’s like Victorian explorers outfitting for a safari into the heart of Africa.

I freely admit I’m the Least Observant Man in the Universe. Kay-Kay could get a buzz cut dyed bright chartreuse and it would take me 48-72 hours for it to register. However, when there’s so much pre-departure clutter on the kitchen counter that I can’t get to the toaster, I notice THAT, by gum!

[Author’s Note: That is the first time in Many Decades of Life that I’ve used the expletive phrase ‘by gum!’ in a sentence. It makes me feel all old timey, like one of those Smith Brothers on the cough drop box.]

This is actually the second set of travel piles we—and by “we” I mean Kay-Kay, it goes without saying—have assembled in the last ten days. The first piles were, alas, for naught. 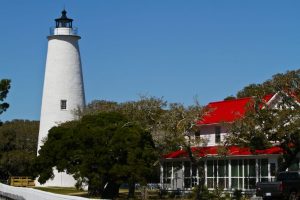 You see, we thought we’d hit upon the perfect Miss ’Rona Vacay. We’d rented a beach place for a week back in the B.P.—Before Pandemic—on Ocracoke Island, one of our fav places on the planet. We can drive/ferry straight through in about seven hours. We’d pack all our own food. The Ocracoke beaches are never crowded, since it’s kinda hard to get there, what with no bridge. And it had gotten schwacked by Hurricane Dorian last year, so we figured it wasn’t due another cyclonic hit for at least a couple of years.

Having grown up in the days of cold winters and non-equatorial summers, Kay-Kay and I failed to factor in the distinct possibility that Global Climate Change might produce another very bad hurricane season in 2020. During a pandemic. Because Karma is not only rather bitchy, she has a very twisted sense of irony.

This hurricane season is in fact so bad that the National Weather Service was reduced to choosing unpronounceable names like “Isaias.” On the other hand, they also chose “Nana”—which is Kay-Kay’s grandmother name—and “Wilfred”—a fitting homage to the recently late and still great, Wilfred Brimley. (Raise your oatmeal in a toast…) 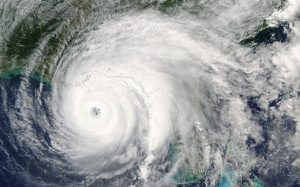 In fact, there are likely to be so many cyclonic Atlantic storms this year that we’ll run out of the pre-selected 21 names. Twenty-one because of blatant official discrimination at the World Meteorological Organization against all Quentins, Ulysseses, Xaviers, Yuls, and Zebulons out there! XYZ Names Matter! XYZ Names MATTER!!!

I didn’t know until “researching” this blog post that they retire hurricane names. Seriously, like they retire the jersey number of some third baseman who hits 400 career home runs. Admittedly, some storm names deserve retirement—Camille, Katrina, Sandy—because… awkward.

None of this does anything to explain the second round of pre-departure trip piles accumulating around the house and blocking my toaster access.

Just two days after putting away all the beachy stuff rendered useless by Hurricane Unpronounceable, Kay-Kay and I decided to decamp from our Right Coast abode to the Left Coast and stay through the New Year. Not entirely coincidentally, this would be the domicile of Goober and Goldie, our grandchildren. Also, their staff—our daughter, Peanut, and her husband, JD. 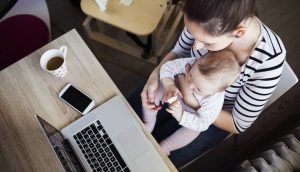 Peanut and JD have a sweet place in the Greater San Francisco area and both have remained fully employed with great jobs throughout the Current Unpleasantness. These jobs are amenable to working from home, which is what they’ve both been doing. In a quarantined house with a 5-year-old and a 16-month-old. Stress like I never knew as a parent, for sure. When Kay-Kay and I were their age, our youngest child was eight and Peanut was already a teenager—much lower energy-attention requirements than with a preschooler and a toddler.

It dawned on me that with Goober starting online kindergarten in a few weeks, Peanut and JD would be moving from two people trying to work from home to three people working from home. And Goober is not exactly at a self-sufficient age for online learning, having only recently learned to tie his shoes. Also, said toddler sister remains in need of attention. Yikes. 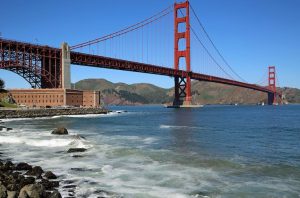 Since Kay-Kay and I have the luxury of being able to work anywhere with a reasonably reliable connection to the WorldWide InterWeb of Things & Stuff, after approximately 20 minutes of consideration and web browsing, we called out to California to see if our long-term presence in an Airbnb guest house five minutes down the hill might remove some stress from their lives.

Of course, getting to see our grandkids almost Every Single Day has nothing to do with this Very Selfless Act. I’m kidding. I’m a big kidder.

We’re driving the 3,000 miles so we’ll have a car with us. Considering the rent for 17 weeks in a San Francisco-area guest cottage is equivalent to the GDP of Mauritius, we thought we’d economize on the multi-month car rental. Also, neither Kay-Kay nor I is keen on climbing into a transcontinental viral mailing tube for a six-hour flight. Thank you, Coronavirus, for making 60 the new 70 for “at-risk demographic” purposes. 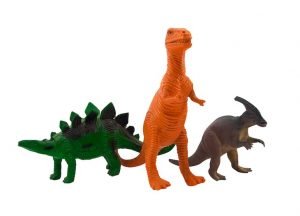 So we’re accumulating very different piles of travel stuff these days. There are, for example, eight colorful and somewhat bulky dinosaurs making the cross-country trek with us. During their twice weekly two-hour FaceTime play dates (her current contribution to helping out with the kids), Kay-Kay and Goober have embarked on a months-long Saga of The Dinosaurs from inside one of our guest bedrooms. For many weeks, the poor reptiles were hospitalized with various illnesses and injuries under the tele-medicine treatment of Dr Goober, D.D.M. (Doctor of Dinosaur Medicine). Once back on their fossil-imprinting feet, the dinosaur gang found themselves trapped in a cave (under the guest room bed) for several play dates, then trekked intrepidly into peril on the North Pole (which involved a surprising amount of white packing peanuts).

Keep in mind this 5-year-old boy has never actually touched these dinosaurs. But he will soon! 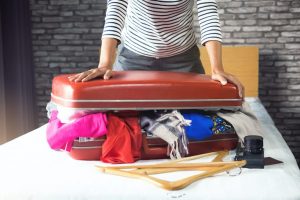 Other pre-packing piles include clothes for three seasons, more toys for Goober and Goldie, and various exotic bags and boxes of non-gluten flours and nut meals, for gluten- and dairy-free Kay-Kay. I, on the other hand, usually request “double gluten” and “extra chunks of milk fat” when ordering.

Also, we have a pile of herbs and spices. A lot of Herbs and Spices. (Who had a couple of hits back in the ’70’s, I think. But I may be wrong.) Because don’t you just hate buying stuff and then leaving like 90% behind in an Airbnb? It feels like taking a rental vehicle through the car wash. It drives Kay-Kay crazy, which by necessity drives me crazy. Buying baking soda is okay, it’s cheap and can always be left to sanitize the kitchen drain or freshen the fridge, but Garam Masala? No way.

Little Fiat That Could 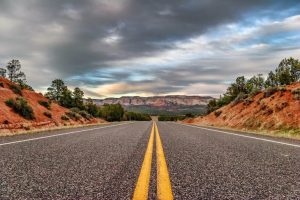 I’ve been in charge of route planning, which is somewhat challenging in this Time of Corona. First, I made a list of Route Planning Criteria: 1) interstates exclusively, 2) 650-750 miles/day, 3) only hotels with individual room A/C units, 4) avoid all Dumb States.

For better or worse, I’ve driven this route a few times in the past. Here’s the trip navigation:

– Drive to Ohio, then proceed in a westerly direction.

– Drive past my hometown of Skeeterville at 70 mph; don’t stop. 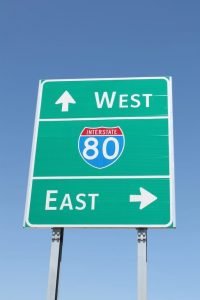 – Cross every branch of the Platte River twice while transiting the 27,000-mile width of pool table-flat Nebraska.

– Keep the tank at least half-full while traversing Wyoming, Utah, and Nevada to prevent mental images of dying and becoming a pile of sun-bleached bones.

– Cross the Sierras through Donner Pass, being sure to stop just before to grab some lunch.

– Drive until we see lots of water.

I estimate 3-4 days for feeling to return to my buttocks. You, however, Dear Reader, will be treated to months of “California Dreamin’” blog posts by Yours Truly.

Stay safe and see you on the other side!