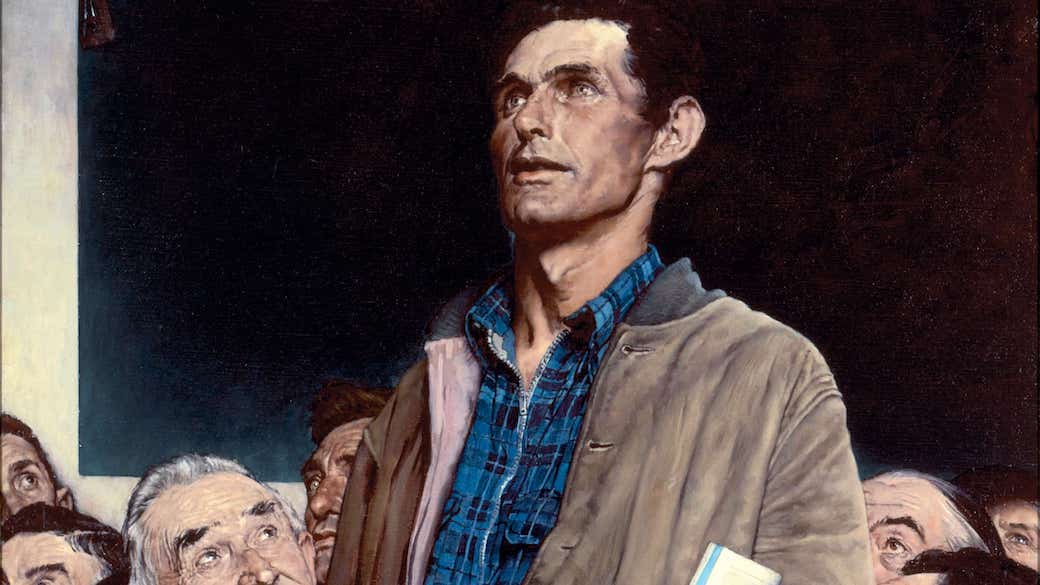 There’s been a lot of caterwauling since a Certain Orange Person was banned from decent social media platforms in January. Now that I’ve checked off “Use Caterwauling in a Sentence” from my bucket list, let’s get something straight. Neither you nor the aforementioned Orange Person have a First Amendment-protected right to free speech on Facebook. Also, not on Twitter. Or on Instagram, Parler, YouTube, Pinterest, and TikTok. 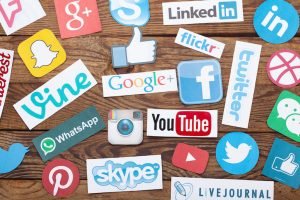 And I mean legally none. Nada. Zero. Zip. They are commercial entities, private enterprises, Evil Empires of Greed. But what they are not is Government.

So don’t ever, ever, ever say, “Mark Zuckerberg is denying me my First Amendment rights!” Or “It’s unconstitutional for Twitter to suspend Trump’s account!” You may feel better, but you’ll sound kinda ignorant.

Here’s the part of the First Amendment that matters in this context: “Congress shall make no law…” 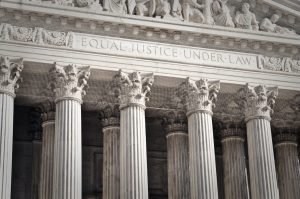 At least that’s the way things stood for 137 years. But beginning with a 1925 free speech case about a state prosecution of an Actual American Socialist for his published writings in Gitlow v. New York, the Supreme Court created a nifty device known as the Incorporation Doctrine. This legal thingamajig, handy as a Swiss Army Knife, utilizes the Due Process Clause of the 14th Amendment to bring all levels of government under the 1st Amendment.

The Free Speech Clause was only the beginning. The Court has systematically incorporated nearly every right mentioned in the first eight amendments to the Constitution against all levels of state government. 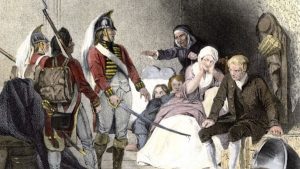 There are a few rights that haven’t been incorporated, like grand juries. Also, quartering of soldiers, so your Boise Airbnb may not be safe from occupation by the Idaho National Guard. I trust this will not cause loss of any sleep.

This isn’t some musty doctrine either. The Supreme Court used it as recently as 2010 in their controversial decision in McDonald v City of Chicago that incorporated the Second Amendment’s right to keep and bear arms. So there’s still hope for keeping your Boise Airbnb safe. 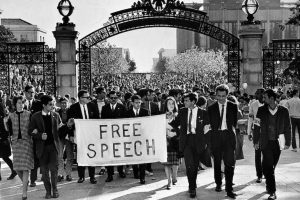 And also because there’s something sort of different about social media, right? Admit it. The big SM platforms have become ubiquitous and pervasive in our lives. They’ve largely displaced the more traditional forums for public speech. They just feel different than, say, the Panopticon Movie Theater or Bubba’s Bucket of Suds—places in which we don’t have much problem allowing owners to restrict whatever speech they want.

(All except for Marv, the old guy at the end of the bar at Bubba’s, it goes without saying. He’s a veteran and harmless enough, even when ranting about Area 51 and aliens after his fifth vodka gimlet. But Marv’s the exception that proves the rule.) 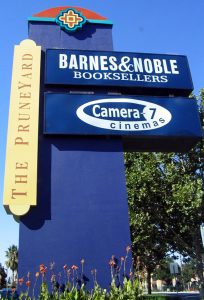 There has been one not exact-fitting legal analogy to speech in the new digital commons of SM. It involved… shopping malls in the 1970s. Specifically, the Pruneyard Shopping Center in Campbell, California.

Unless you’re a denizen of the Valley of Silicon, you can be excused for never having heard of Campbell or the open-air Pruneyard Mall. Campbell is a small city about halfway between San Jose and Los Gatos. Or in techie terms, halfway between eBay and Netflix headquarters. Which seems appropriate for our purposes here.

The case involved some high school students who set up a table at The Pruneyard to protest United Nations General Assembly Resolution 3379 that declared Zionism a form of racial discrimination. The Pruneyard’s security ordered the students to leave since they hadn’t bothered to ask permission from the owners. That permission would almost certainly have been denied, which may explain why the students never asked. Or because they were average unruly teenagers. Either way.

The students then sued The Pruneyard in state court for violation of their First Amendment free speech rights. The Santa Clara County Superior Court said, “Umm, The Pruneyard ain’t the Government, so pack up your table and move along kids.” Or words to that effect. I’m paraphrasing. 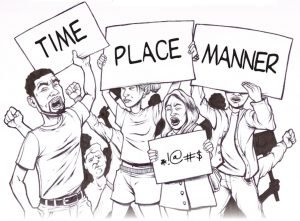 The California Supreme Court, however, sided with the students. You see, the federal constitution grants a negative right—Government must not interfere with free speech. The California Constitution, however, grants an affirmative right to free speech. Therefore, the state Supremes reasoned, the students had a right to speak freely at a place open to the general public like The Pruneyard, subject to the same well-scrutinized time/place/manner restrictions allowed to Government.

But they sure look a lot like a virtual Pruneyard, don’t they? As with shopping malls, people go to Facebook and Twitter, Amazon and eBay to be entertained, to buy things, and even as part of their work. 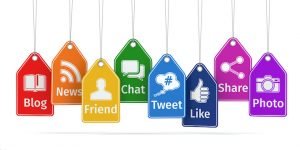 What we’re witnessing with the universal permeation of social media throughout our personal and communal lives is nothing less than a tectonic movement. As with so much of our interaction with friends and family, our political discourse has migrated to social media. SM is increasingly displacing all traditional public forums—newspapers, television, radio, town meetings, public speeches. It all happens on Facebook and YouTube now. Why else would That Orange Guy be fighting so bitterly to get back on all the SM platforms that booted him for incitement and hate speech?

So there’s something different about social media. The SM platforms have deliberately created a quasi-public forum around themselves, even using the language of public spaces to describe themselves. “Digital town square” has been used so much it’s now officially hackneyed. Facebook has piously intoned they’re dedicated to enhancing and protecting “public discourse.” 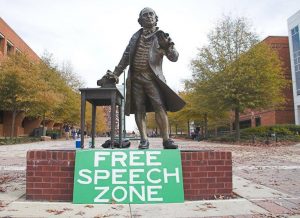 The problem is, of course, that SM platforms have consciously sucked up vast swathes of our public political discourse in order to generate revenue for themselves. They manipulate, spoon-feed, channel, throttle, amplify, and block at will. And they can do this specifically because they’re Not Government and are free from the strict scrutiny imposed by the First Amendment on any government entity attempting the same sort of actions.

Catalyzed by the 2016, 2018, and 2020 elections, Facebook’s senior management from Mark Zuckerberg on down is well aware of the public relations disaster that this has created. FB responded by establishing and funding an independent Oversight Board to make decisions regarding content moderation. This is, of course, a flack-friendly anodyne way of saying, censorship decisions. 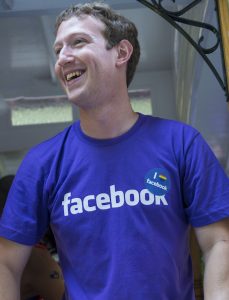 The Oversight Board has gained a popular handle—Supreme Court of Facebook. This should give you a democratic shiver. But it’s a powerful tell of how people now view Big SM. They’ve become quasi-public entities, providing quasi-public forums where the lion’s share of our public discourse occurs every single day.

This is a serious problem. I don’t think Zuckerberg or Jack Dorsey of Twitter or any SM Big Kahuna is an evil person. But their incentives are somewhat perverse. Facebook and Twitter are owned by people who want to maximize the money they make. That’s the primal urge that drives capitalism, after all. But the interests of corporate profits and the interests of democracy are often not the same.

Where Do We Go from Here?

What’s to be done, then? Wish I knew, but here’s some spitballing.

Do we Pruneyard social media platforms? That may entail amending the Constitution to create an affirmative right to free speech, as in the California Constitution. Only a handful of states with similar free speech provisions have followed California’s lead. 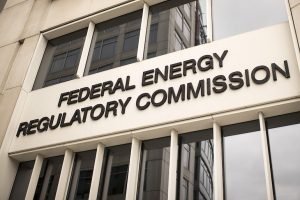 Do we declare SM platforms public utilities, with the power to regulate them like electric generators, natural gas providers, or cable TV companies? There would be some hurdles to get over, starting with whether this would constitute a government taking of private property albeit digital property.

Do we nationalize Big SM, like countries have done over the years with train systems, mines, and oil fields? Can’t see that happening in the US of A anytime soon, can you?

No, Facebook isn’t Government and isn’t required to protect your free speech. But is that good for our democracy?