Flying in the BUFF (Part One) 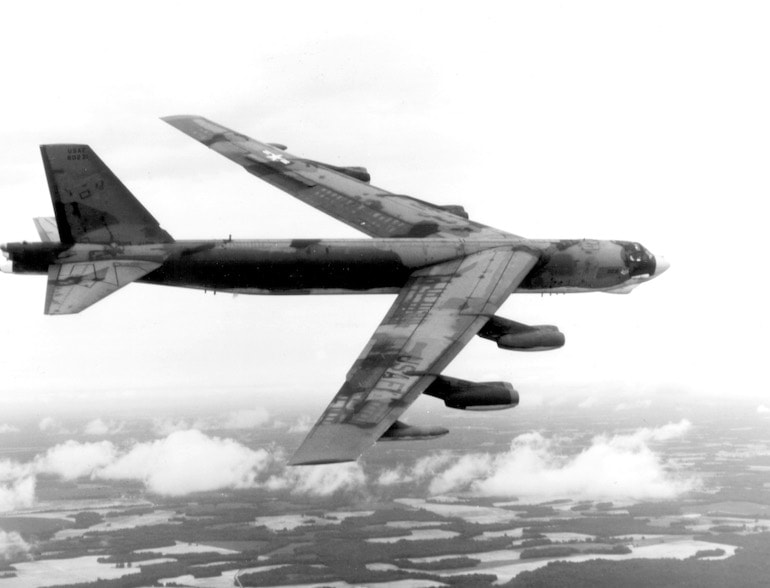 Given the Really Scary Things said by Two Bad-Haired Leaders of Countries with Nuclear Weapons over the past week, I thought it an ideal time to own up to a rather sordid part of my checkered past. For three years of my wasted youth, I was a small cog in the big machine that was Nuclear Deterrence. I was a navigator on a B-52 bomber. Here’s some of the real story about that leg of the American Nuclear Triad back in the Reagan days.

The B-52 is officially nicknamed the Stratofortress. However, this name was never used by those of us who actually flew it. No, the B-52, much beloved by we crew dogs, ever been known as the BUFF. This pet name is an acronym for Big Ugly Fat… Fellow shall we say, this being (mostly) a PG-13 blog.

The BUFF was first rolled out in 1952 and almost 750 were built over the next decade. It was produced in eight flavors, designated A through H. I flew the most popular (193 built) B-52G.

Did I mention the Air Force is still flying the B-52H? Swear to God. There are 76 of them in service, albeit hauling conventional bombs around at high altitude. But the BUFF hasn’t exactly been young for some time. To illustrate, I never flew a B-52G that was younger than me. There was gum under my ejection seat older than I was. So by anyone’s measure, the BUFF is a Venerable Old War Horse, a category into which I graduated some years ago, too.

Back in the day, the BUFF was flown by a six-man crew. And it was six men. A 1980’s bomber squadron was very much like the Little Rascals’ “He-Man Woman Haters’ Club.” Darla was definitely not allowed inside. Add to this that for seven days in a row, every third week, we were required to “sit alert” with our bombers. We slept in a blast-hardened—so they assured us—“alert facility” positioned out on the airfield right next to a parking ramp where six BUFFs sat locked and loaded with nuclear weapons pointed at Russia.

The first two days of an alert week were really busy. These days were filled with studying our battle flight plan, reviewing intelligence and weather over Russia, doing flight simulators. Days 3 through 7, however, were dead boring and contributed much to Our Incorrigible Behavior. But first we had to change over the aircraft with the crew coming off—who’d been up late watching porn. Let’s just say they were anxious to be off alert. However, our jets were loaded with a lot of fuel and 22 nuclear warheads. The B-52G, fully loaded, was advertised by Boeing as having a takeoff weight “in excess of 500,000 lbs.” As in 250 tons. It took every inch of an 11,4000’ runway to get that Big Ugly Fat Fuc… errr, Fellow off the ground.

When changing over, we literally signed receipts for the nukes. To do this, one had to visually inspect each weapon, including the warhead settings. As we have just heard in the news, these weapons have a fun Dial-A-Yield feature. This was a twisty knob marked A-B-C-D-E that would give you a bigger or smaller KA-BOOM. This was the navigator’s job, partly because we were the guys who launched the missiles and partly because the bombardier was senior in rank and didn’t want to be bothered.

The interior weapons were a little tougher to access. We carried six short-range attack missiles (SRAMs, pr: “shrams”) in the rear bomb bay. All you could do was look at them from the ground and count to six. They were sealed, so you had to sign for them with a lot of trust in the gomers who assembled them. The four “gravity weapons”—also known as Big Shiny Bombs—were in the forward bomb bay, two down and two up in a rack. To check the settings, you had to flip open a little access door. No sweat for the bottom ones, but for the top pair you had to climb up and lay on the bottom pair. That was up close and personal. Touch-A-Nuke, as we called it.

Usually we dealt with the enormity of our responsibility through unremitting gallows’ humor. Lots of jokes about kicking Ivan Bagadonutz’s ass or turning Moscow into glass. What you’d expect from young guys trying to sound brave but scared by the surreality they found themselves in. Just to sharpen the edge a little, at least once each alert week, we got a random klaxon—the signal to rush to our airplanes, start engines, and decrypt a message coming over the radios telling us what to do. Thankfully, this message was always something like “start engines, check systems, shut down.” But each and every time that horn went off, you never knew 100% for sure until you decoded that first message that you weren’t headed for Irkutsk.

One of the rights of passage for young BUFF aviators on their first “alert tour” was being subjected to practical jokes designed for each crew position and time-tested. (See, “frat house without booze,” supra.) In hindsight, many of these were quite cruel. The Electronic Warfare Officers’—always called “E-dubs”—favorite prank for their New Guys involved collusion between his crew and another crew on alert. The other EW would get into the code books and encrypt a message ordering us to launch and go bomb the Soviet Union. Then the co-pilots would set radios to the same random frequency and the senior EW would broadcast the launch message to the New Guy’s aircraft. We had one Second Lieutenant EW actually wet his flight suit. It was, at the time, hilarious. As I said, in hindsight, maybe not so much.

It was a strange time to be in the middle of all this. I crewed during the height of the Reagan military build-up, at a time of serious tension with the Soviets. We didn’t know it at the time, but the Soviet Union was about to implode, which added to the danger. We got out of it OK in the end. Just hope we can do the same now.

Well, I’m at the end of my self-imposed word limit and haven’t even gotten us airborne. I’ll do a “Flying in the BUFF, Part II” sometime in the future. So many more stories…