Flying in the BUFF (Part Four) 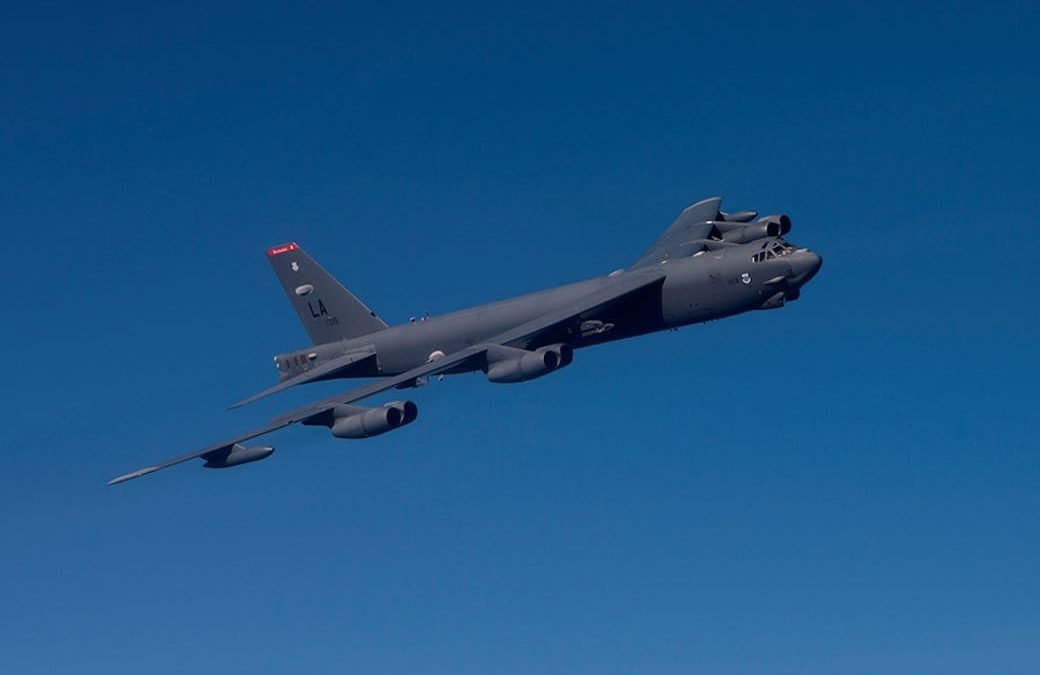 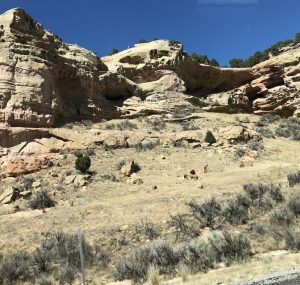 My wife Kay-Kay and I survived a 3,000 mile cross-country odyssey from the Right Coast in a Fiat 500.Before sunrise on Day 4, we Happy Voortrekkers transited the Bonneville Salt Flats in Utah. With no light and less vegetation, this put me in mind of some storytelling. Being in this desolate part of Utah reminded me I had once done some launching somewhere around those parts. You see, long ago in a galaxy far away, I was once a navigator in a B-52, The BUFF. And I was the guy that launched the missiles.

I’ve written posts before about my salad days as a young bomber crew member, sowing my wild oats and vomiting up in-flight lunches in the venerable Boeing B-52 Stratofortress. A name literally ZERO of us who flew her ever used. She was the BUFF, an acronym for Big Ugly Fat Fu… errr …. Fellow.

When called upon to test our air-launched cruise missiles, we’d saddle up at some ungodly hour and trundle out to Utah and pickle off one of our Little Buddies. The maintenance guys would helpfully replace the nuclear warhead with ballast, so as not to incinerate Ogden. Although that would have been quite a show. 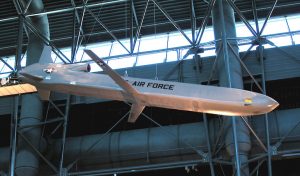 Chatting with Kay-Kay about test launches led me, in a meandering way that doesn’t speak well of my vestigial navigator skills, to recalling my old flight commander, Major Brian T. Priestly. He was A Genuine Original and a man I shall not forget to my dying day. Really.

The basic organizational unit of the Air Force is the Squadron. In our case, this consisted of 16 bombers and about 34 crews of six crew dogs each. Seven of these were specialty crews, with the remaining 27 line crews divided into three Flights—named, with stunning originality, A, B, and C Flights. I was assigned to C Flight, commanded by Major Priestly.

This being the Cold War—when the Russians were the guys we were planning on incinerating—the primary purpose of the Flight was, every third week, to pack up our troubles (and our arctic survival gear) in our ol’ kit bags and schlep down to the Mole Hole. This was a blast-hardened building where we would work, sleep, and watch first-generation MTV, all within easy sprinting distance of our nuclear-loaded aircraft. These were parked next to the Mole Hole, ready for a quick start and takeoff “if the balloon went up.” Meaning we had been ordered to bomb the Soviet Union. Good times in The BUFF. 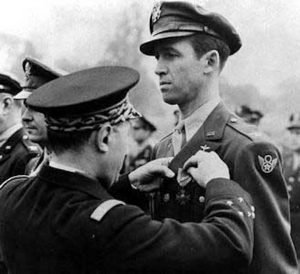 These seven-day alerts were where I really got to know my flight commander, Major Priestly. He was a proudly self-described Florida Cracker with a slight stammer that made him sound very much like Jimmy Stewart. [Fun Fact: Jimmy Stewart was a directed bomber pilot and retired form the Air Force Reserve as a Brigadier General!]  Please note I am not disability shaming the good Major—his stammer was pure affectation. When he was in the airplane, he never once stuttered on the radios or the interphone. It was all part of the Major Priestly brand.

Major Priestly and Me

Let me qualify that. He sounded very much like Jimmy Stewart… if Jimmy Stewart had been the most profane man on the planet. Major Priestly did not invent the F-Bomb, but he indisputably perfected it. This was the 1980s and the F-Word had not yet reached the universal ubiquity it enjoys today, so the Major’s lexicon was able to shock the conscience in his angrier moments.

And he had a temper. He could lacerate a young navigator or copilot like he’d been strapped to the mainmast and flogged for an hour or two. I’m sure he dearly wished The BUFF had a mainmast. I know this from personal experience. But his butt-chewings were the purest form of artistry, combining astoundingly profane originality and utter character assassination. It would have been like bullfighting, had he worn skin-tight sequined trousers and pink stockings. Which I would have dearly loved to have seen. For example:

Major P: “Get the hell in here, Walkman!” (Note: he was the only person who ever called me that.) Did you actually nav-nav-navigate your g—d— aircraft SEVEN F-ING MILES off course and get your comically inept a$$ thrown off the f-ing bombing range?!?!?”

Me: “Yes, sir. It was entirely my fault, sir. My crew had nothing…”

Major: P: ‘Jeezus H. M*ther F-ing Christ on a Biscuit I KNOW that, you dumb sh!t. I was f-f-flyin’ this old bird when you wasn’t even a g—d— glimmer in your poor-poor-poor mother’s eye, d!ckweed!”

Me: <Didn’t smoke. Smoked cigarette because Major P told me to.>

And It Got Worse…

Major P: “And do I understand you went and reported your sorry-a$$ f*ck-up to COLONEL O’MAHONEY, the g—d— Group commander???”

Major P: “Son, did Mama drop you on your f-ing head when you was still sh!ttin’ yeller? Or did you just be-be-become such an i’norant b@st@rd all on your own???”

Major P: “Walkman, here’s how it is. Us crew dogs? We’re like-like-like shipwrecked sailors, bobbin’ around the g—d— ocean in one of them b-b-big round life rafts. And all them Colonels? They’re the sharks, swimmin’ in the m*therf’ing water, all ’round us.”

Major P: “Now-now-now if we keep together, keep ourselves hydrated, we may-may-maybe get rescued. But then, ever’ now and agin, some colossally stupid sonovabee-atch like YOU insists on hang-hang-hangin’ his dumb a$$ over the side of the raft, danglin’ it in the water for one of them g—d— Colonel-Sharks to take a big ol’ bite out of. Are you fol-fol-followin’ me at all, son???”

Major P: “I mean, it’s f-ing obvious even to my li’l pea brain that you couldn’t chew gum and yo-yo at the same g— d— time, so thought I’d better ch-ch-check. Now get the f*ck outta here!”

Yep, it was like that. But note the almost Biblical parable imbedded therein—in short, “stick with your buddies and don’t go looking for trouble.” There was a moral to every one of his R-rated stories.

Major Priestly would never become Lieutenant Colonel Priestly, for reasons probably apparent. Also, he had more than one DUI, being a Very Hard Drinker as well as a chimney-like chain smoker. Some words on that.

They’d just prohibited smoking in USAF aircraft back then. This was a big change—there were little round pullout ashtrays at each crew station in the BUFF. Keeping in mind that our flight missions ranged from 8 to 14 hours, there was no way in hell Major Priestly wasn’t going to smoke in the aircraft. No. Possible. Way. 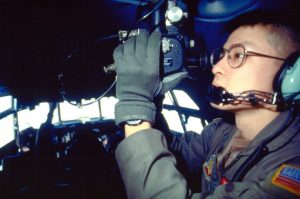 We flew several times with Major Priestly when our pilot was off at some training course. When he was going to smoke, he’d always said the same thing, “Pilot’s clearin’ off oxygen and interphone. Gonna smoke some dope.” Then he’d go back behind the Electronic Warfare Officer’s seat and light up. Above him was the sextant port, where you’d insert the navigation sextant if you were taking a fix on stars or the sun. The sextant port was a hole in the top of the aircraft, covered over by a lever-operated shutter. Major Priestly would inhale, flip open the sextant port, and blow his smoke out the top of the airplane.  Repeat as needed. An elegant solution and one that, blessedly, did not cause a rapid decompression because the hole was small. And it was The BUFF.

This was if we were at high altitude. If we were at low altitude, where we spent several hours on each flight practicing getting under Soviet radars, you weren’t allowed to leave your seat. Mostly because we were flying 400 feet above the ground at 300 mph. In these instances, Major Priestly would give control of the aircraft to the copilot, put his elbow up on the sill, slide open his side window, and light up. All he needed was an eight-ball necker knob on the control yoke and a pair of fuzzy dice hanging from the landing gear handle. 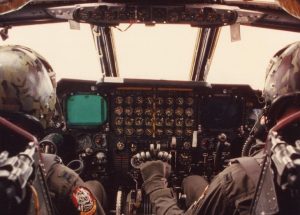 Although he’d never be promoted, Major Priestly had the finest set of pilot hands I ever encountered. He could fly that big airplane so smooth and so sweet. He’d forgotten more about the BUFF than any of us would ever learn—he once showed us how to vacuum the flight deck by holding one end of an extension oxygen hose up to an open sextant port while a crew mate sucked up debris with the other end. He was the guy I would have wanted to go to war with, if that eventuality ever occurred. Had the balloon gone up, he’d have been in the lead aircraft when we took off for Russia.

I don’t know if Major Priestly is still alive or not. Although I like to hope he’s enjoying a long retirement, his patently unhealthy lifestyle suggests otherwise. Yes, his personality was crusty as a bowl of Corn Flakes and he had a mouth like an open sewer, but Major Priestly was an example of the incomparable value of pure, undiluted competence. He was an aviator’s aviator and loved that old BUFF like it was his mistress. There has to be a place for that still, right?

And I’ve used that life-raft-and-sharks story many times and in many circumstances over the years.